Overview Discussion
Over 2,000 years ago the ancient Etruscans around Pitigliano cut into the volcanic tufa rock to create pathways (Vie Cave which means excavated roads or cuts). These pathways are usually three meters wide and half a kilometer or more in length. The depth varies but many are more than 15 meters deep. Etruscan, Roman and Medieval carvings are found on the sides of the walls. Today you can walk on many of these pathways.

Practical Information
Location: Italy - Tuscany - Grosseto - Pitigliano
The Via Cava di San Giuseppe is the easiest to find and the trail is well marked. Take the Sovana-Sorano road that goes along the valley below Pitigliano. When you cross the river there is a picnic area and parking, with signs for San Giuseppe. The trail is not long. We walked out and back in less than an hour.

Via Cava di Fratenuti runs parallel to San Giuseppe, on the other side of the river, but we were not able to find the trail.

More Information
Etruscans lived in the area of northern Lazio and southern Tuscany before the ancient Romans. It is not understood what these pathways were used for. They are not straight paths connecting villages, but instead wander through the countryside, usually near burial areas (necropolis or tombs built in cliffs).

There are more than eleven pathways in the valley below Pitigliano (Pantano, San Lorenzo, Gradone, della Madonna, della Grazie, della Annuziata, Concelli, Pietralata, Poggio Cani, Fratenuti). They are also found in other parts of Tuscany and Lazio.

The Via Cava di San Giuseppe, a short distance from Pitigliano, is a good pathway to walk. The trail starts near the river and you walk gently uphill to the end of the pathway. Signs for "Necropoli Etrusca" take you to the area on top of the pathway where there are the remains of an Etruscan tomb. At another point on the pathway you come to "L'Edicola di San Giuseppe", a niche on the wall of the pathway which contained a fresco of San Giuseppe (Saint Joseph). A sign indicates that the fresco was damaged and reproduced. It also says you can see hoof prints from donkeys who walked on the pathways. The pathway ends at a fountain, not prehistoric but a very pretty spot.

Video: SOS Le Vie Cave
James and Liz Willetts have created a video exploring and describing the Vie Cave of Pitigliano, Sorano, and Sovana. Many of these pathways are falling into ruin and they are trying to bring attention to them in hopes of having them preserved. Recent floods damaged the pathways. Boulders have fallen down from the high ways and tree roots have done damage.
S.O.S. Le Vie Cave (The Sacred Ways of Pitigliano, Sorano, and Sovana) (12 minutes)
Published on 16 Nov 2015. Presented by Patrick Nicholas and Giovanni Feo.

Description: This video is about the Etruscan Sacred Ways of Southern Tuscany, which are a unique and important part of our cultural heritage. It illustrates the dramatic appearance of these mysterious man-made passageways which are suffering from neglect, damage by the elements, and encroaching vegetation. It also calls for urgent action to prevent further deterioration and to restore these ancient monuments, using traditional methods, before they disappear for ever. 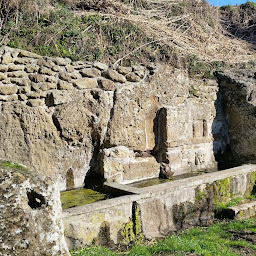 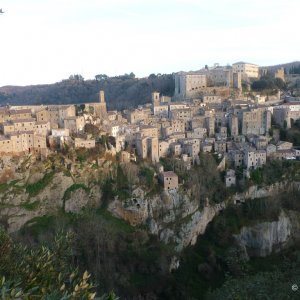 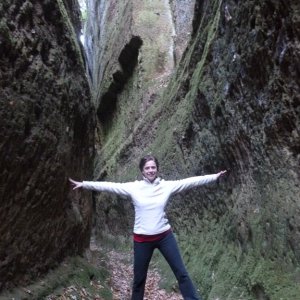 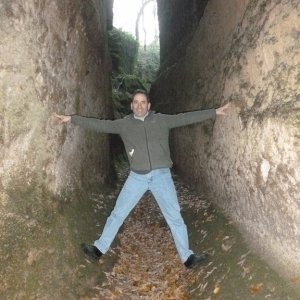 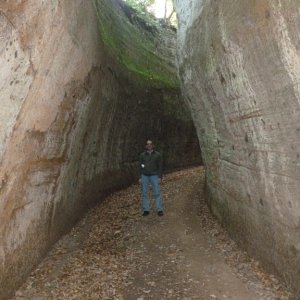 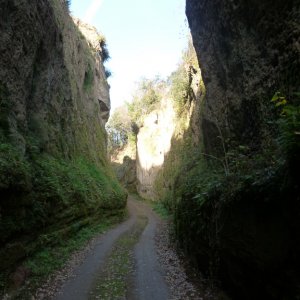 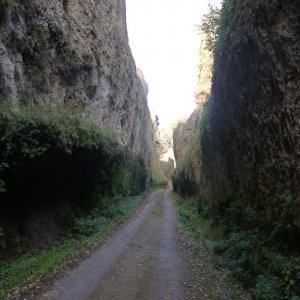 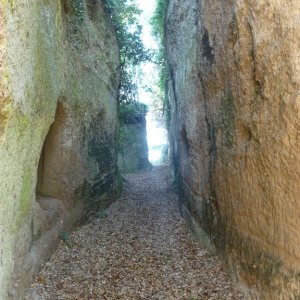 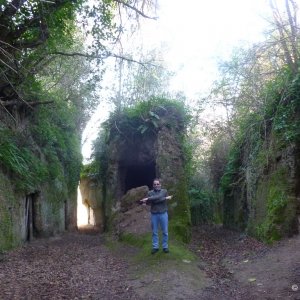 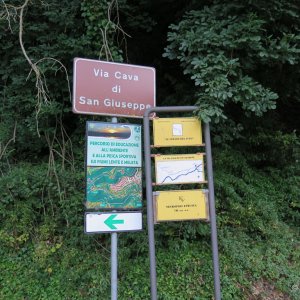 Ancient paths cut into the rock in southern Tuscany.

About the Author
Pauline is the Forums admin.