After a long drive yesterday, we decided on a quieter Sunday .... Just a 1 hour walk out to Dartmouth Castle and back again.

We spent the morning washing clothes (and hair, in the case of the one of of us who has hair) and set out for the castle at 1.00. The wind was picking up. It's a great walk from Dartmouth along the river to the western headland on which the castle perches. It's along the road that goes there, however there were almost no cars and most people walking. You get to see some very interesting buildings and historic sites by walking. We did the walk again later in the week, when cousin Alison joined us from Edinburgh, and I'll leave the description until then.

The wind was whistling around the castle when we arrived, however the cafe beside the entrance had a lee side that was sheltered and we sat in the sun for afternoon tea.

Into the castle which is only open on weekends in Winter. Two chaps at the gift shop sold Cheryl on the English Heritage's ginger wine and various liqueurs. We also spent some time talking about the castle both before and after our tour. And I do mean tour. We spent several hours in and around the castle. Every room and part of the castle had lengthy signage and AV displays that almost make the place come alive.

I was going to write a lengthy report on what we saw in the castle, however I have discovered this English Heritage site:
https://www.english-heritage.org.uk/visit/places/dartmouth-castle/history/

Do yourself a favor and spend some time looking at it. there are even videos of reenactments etc. Just a brilliant website. There are also links out to other content, such as the origin of the castle that I've posted below..

How Dartmouth’s first castle, John Hawley’s ‘fortalice’, was built as much from a desire to protect the town’s notorious privateers from retaliation as to increase national security.

Memorial brass of John Hawley and his wives
LICENCE TO PLUNDER
A high, ragged wall that forms part of Dartmouth Castle in Devon is the last remnant of a fort built in 1388 by John Hawley (c.1350–1408), mayor, merchant, privateer and inspiration to the poet Chaucer.
At that time England was at war with France, part of the long conflict known as the Hundred Years War (1337–1453). But while the countries fought, Dartmouth shipmen continued to trade wool, tin and dried fish for European wine and linen.
The king made use of these hardy sailors, in the absence of a standing navy, to protect the English coasts with their private fleets. They were licensed to attack the ships of the king’s enemies and to help themselves to their valuable cargoes while they were at it. The king took a portion of the profits, as was standard practice across Europe.
This so-called ‘privateering’ differed from piracy, which preyed indiscriminately on the ships of any nation. Ships of neutral countries were meant to be left alone, as were French ships during the various truces of the war. But the Dartmouth shipmen had their eye on profit rather than diplomacy, and their dubious activities meant that the king’s authorities frequently had to wade in to settle complaints from abroad. 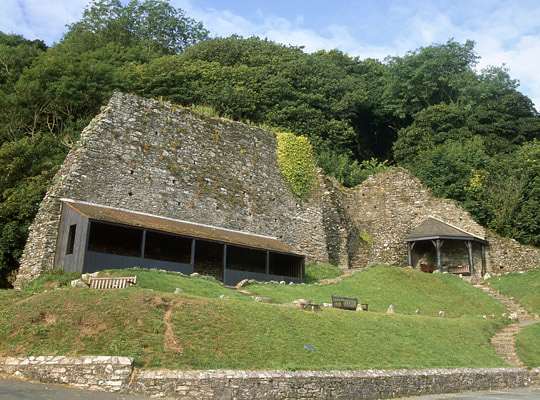 The remains of John Hawley’s fortalice, Dartmouth’s first castle
PILLAR OF THE COMMUNITY?
John Hawley was one of the richest and most successful of these ‘privateers’, and was repeatedly commissioned by the king to ‘keep the seas’. Two of his ships even formed a part of Richard II’s escort to France for his marriage to Isabella of France in 1395.
Hawley was elected mayor of Dartmouth 14 times, and was twice the town’s MP. He was even made a collector of customs. Yet Chaucer’s fictional shipman from Dartmouth, apparently based on Hawley (whom he had met in 1373), suggests that he was no saint. Chaucer described a ruthless character who took no account of ‘nice conscience’, kept a dagger on a cord about his neck, and sent his enemies ‘home by water’ – that is, made them walk the plank, or simply sunk their ships. 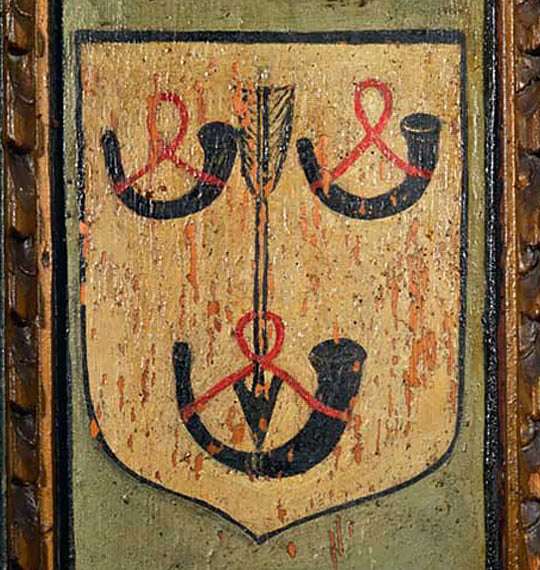 John Hawley’s coat of arms
The evidence certainly suggests that Hawley was more unscrupulous than most of his fellow privateers, often overstepping the boundary between legitimate privateering and out-and-out piracy. He was frequently summoned to account for himself, repeatedly warned, and even thrown into the Tower of London for six weeks in 1406. He was released only after pledging to compensate some merchants in Barcelona.
One trader from Piedmont spent many years trying to get compensation for Hawley’s lucrative seizure of his cargo of olive oil and wine.
But still the king mostly turned a blind eye, profiting alongside Hawley and his fellow privateers. 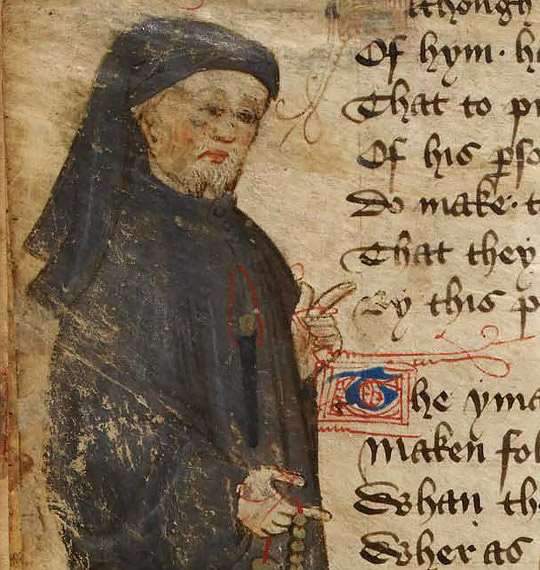 Geoffrey Chaucer, from a 15th-century manuscript. The shipman in his ‘Canterbury Tales’ was probably based on Hawley© British Library Board
FIRST FORT
So it was no wonder that Edward III feared the ‘reproach which might befall the town of Dertemouth’ from vengeful European seamen, and sent orders to ‘survey and correct all defects in the said town and port, and fortify the same’, as did his successor, Richard II.
What defences the town already had is not known, but the first fort was Hawley’s. In 1388 he and the civic authorities built a series of battlemented towers linked by an enclosing wall on a rocky peninsula at the narrowest point of the mouth of the River Dart. From this ‘fortalice’, men armed with catapults and handguns could defend the river mouth against hostile ships.
Hawley, meanwhile, kept at it. Even in the last year of his life, when he was nearly 60, he was one of a number of shipmen accused of illegally seizing 17 foreign ships. He was buried in splendour in Dartmouth’s grandest church, St Saviour’s, alongside a brass portrait of himself, flanked by his two wives.

Having eaten so much for dinner last night, we hadn't had room for desert so Ches had decided we would return to Rockfish for an early dinner that would consist of just the chowder and desert, no main.

Mine was again excellent however Ches's was extreme. Salt and Pepper Squid ... well that's nothing out of the ordinary. Followed by "Deep Fried Cream Tea" "DEEP FRIED CREAM TEA"! Ches really has a passion for cream tea however three small doughnuts filled with jam and clotted cream and then deep fried! I had "Eton Mess". I'm much more refined.