If you are going to be visiting Spain, and if you love to eat and drink, you are going to be very happy. Spain is one of the top food and wine destinations in the world, and for good reason. You can start eating early in the day and continue to eat into the wee hours of the morning. You can eat and drink in all price ranges, from practically free in some tapas bars to a small fortune in Michelin starred restaurants.

The Spanish start their day with desayuno (breakfast) of coffee and bread or pastries, usually served in bars and cafes from around 7:00am to 10:00am. Almuerzo (lunch) is usually served from 2:00pm to 4:00pm and is a long and drawn out affair, involving several courses and plenty of wine. Cena (dinner) is served from 8:30pm or so until very late, and most Spaniards eat at 10:00pm or later. You'll be hard pressed to find a restaurant that is open earlier and if you do, you'll be eating alone, or with a lot of other tourists. Reservations are advised, especially on weekends.

Thankfully, for those of us who can't wait to eat, and those of us who don't always want to eat a large meal, there are tapas. Tapas are finger foods, served in bars and cafes in a range of styles and prices. You can find bars serving tapas all day long, and these bars are often crowded with Spaniards eating before they go out to lunch or dinner!

All restaurants offer a menu del dia (menu of the day) at a fixed price; this is a great way to enjoy three courses at a much lower price that ordering a la carte.

Some tips on tipping, smoking, language

Most restaurants take Visa and Mastercard. Many bars and cafes do not. American Express is not commonly accepted in Spain. It is not necessary to tip in Spain - service is included in the bill - but if you receive great service and feel so inclined, a small tip (10% or less, a euro or two or 5 - 10% for more upscale establishments) is appreciated. Always leave a cash tip. It is not necessary to tip in bars and cafes, but you can leave the small change if you want.

Smoking is generally not allowed inside most bars and restaurants, but smoking in outside terraces and street cafes is permitted and is common. You might choose to eat inside to avoid smoke.

If you don't speak Spanish, or even if you do, invest in a dictionary of food terms. I use "Eating and Drinking in Spain & Portugal" (link for Amazon.com). The book is compact and also available on kindle, it's cheap, and it will make your life a lot easier.

What to Eat in Spain

Spain is a large country and has influences from many different cultures, with the Moors and Arabs leaving the greatest mark. You'll find fresh seafood even in the heart of interior Spain, and lamb and sausage are also very common. Jamon (ham) is everywhere, hanging from hooks in many bars and restaurants. Beans, tomatoes, peppers, garlic and lots of olive oil are other common ingredients. Here are just a few of the specialties of Spain:

Paella was invented in Valencia and was originally prepared with meat and no seafood. Paella always includes rice and saffron, and is cooked with various other ingredients such as seafood, sausage, beans, and vegetables. Everything is prepared and served in a special, flat pan. Generally, it is prepared for two or more people.

Gazpacho is a cold soup of blended tomatoes, peppers and cucumbers. Salmarejo is a version of gazpacho that includes bread.

Empanadas are turnovers made from meat or fish. They can be small and hand held, or giant pies where you eat a slice.

Pimentos de Padron are small green peppers, sauteed in olive oil with a liberal sprinking of salt. They are only occasionally spicy.

Albondigas are meatballs, served everywhere and ranging from large and bacon wrapped to small and in a sauce. Albondigas are often served as a tapa.

Manchego is a sheep's milk cheese and is served in various degrees of aged-ness. Cabrales is a wonderful blue cheese made in the Picos de Europa mountains. Spain has many fantastic cheeses so if you love cheese, seek out places with an assortment to try!

Embutidos are sausages and cured meats. You will usually find platters of assorted embutidos in restaurants, tapas bars and cafes. Some of them can be massive so be careful how much you order. These cured meats are a very popular item to order when drinking with friends and family.

Jamón is ham. But it is not just any ham - it is the BEST ham. The Spanish take there jamón very seriously, and you will find entire shops dedicated to it. There are various varieties, some not terribly expensive, and some are of the break-the-bank-but-worth-it variety, like the famous Jamón Serrano made from Black Iberian pigs with a special diet. When ordering jamón in Spain, be careful to watch the price - don't let a server sell you a plate unless you know what you are getting into. Some of the jamón shops sell delicious sandwiches that are not very expensive and then you can try the ham on a budget.

Tortilla is a baked cake of potato and egg, usually served as a tapa. It ranges from awesome to sitting-around-too-long. When fresh, tortilla makes a delicious lunch or light dinner. This is a good one for the vegetarians in the family.

Of course this is just a small sampling of the various foods you can try in Spain but these are common items all over the peninsula.

Existing on tapas alone is my favorite way to eat in Spain. What became a tradition in Andalucia is now pretty much everywhere. You will find tapas bars virtually everywhere in Spain's cities and here and there in the small towns.

Tapas will be cheaper if you eat them standing at the bar. Look for places that are crowded with locals, and muscle your way in. The various tapas usually are displayed on or in the bar; just point to what you want, and it will be served to you. Everything is on the honor system. Some establishments have a tapa menu that you order from. There are many, many kind of tapas in all price ranges, from toasted bread rubbed with garlic to clams steamed in garlic broth or shrimp in a buttery garlic sauce. Some are hand held and some come in a little bowl or on a small plate.

When ordering a sit-down tapas meal, you can order in three sized - a porcion (small serving), media racion (medium serving) or a racion (large serving.)

Tapas are usually washed down with wine or beer but it is perfectly fine to order water or soft drinks. Some places offer a small, free tapa with a drink.

Coffee is served black and strong, like espresso (cafe solo) or with steamed milk (cafe con leche.) Tea is known as té. Bottled water is everywhere with gas (agua con gas) or without (agua sin gas.) Beer is popular all over Spain or you might try a glass of sidra which is hard apple cider.

Spanish wine is plentiful and reasonable. Probably the best known Spanish red wine is Rioja, but every region produces their own and it is worth it to seek out the local wines rather than always going for the Rioja. If you are interested in wine, before you go on your trip, research the Denominación de Origens (abbreviated "D.O.") of the regions you are going to. You will then know what to look for in local varietals during your visit. White wine is vino blanco, red is vino tinto, rosé is vino rosado, and sparking wine is cava. Sometimes when you order a vino tinto, the bartender automatically reaches for the Rioja, so if you want something local, ask for the exact varietal (for instance, Mencia in the northwest or Garnacha (red or white) in the northeast.)

A trip to Spain would not be complete without sampling some of their fine sherries. Jerez (sherry) ranges from very dry sherry served as an aperitif, to rich, sweet sherry served as a dessert wine. When in the south of Spain, a request for a glass of white wine is often filled with a glass of cold, bone-dry sherry. It is an acquired taste, but once you've acquired it, you'll be hooked. Vermouth is very popular in the northeast and aguardiente (brandy, sometimes flavored) is traditional everywhere. 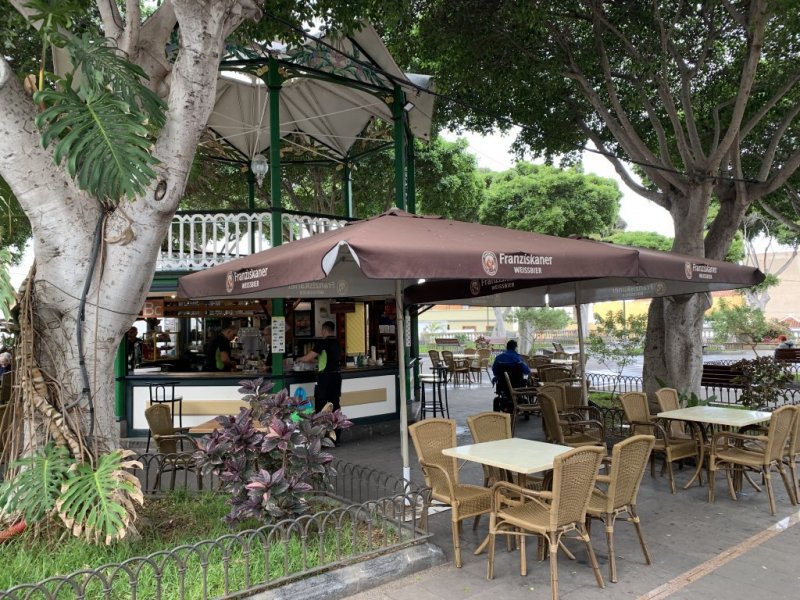 Very useful tips! One thing I would add is that if you don't fancy the menu del dia (in cheaper places they can be dull and stodgy!) and/or you want to order a la carte, feel free to specify that you are going to share dishes (para compartir). There's absolutely no problem sharing one starter and/or main course between two. Or indeed ordering two starters and extra plates so that you can share both. Servings can be quite large, and we find this a good way of avoiding over-eating.

Also, in Granada province all bars will serve a free tapa with every drink (unless it's tea or coffee). And in good bars, the tapa will be more substantial with each drink ordered. So if you have, say, three beers for 2 euros each, you won't need to bother with dinner You may get free tapas in other areas, but in Granada it's a rule.
Veronica in France
La Recette du Jour
Twitter: veronicafrance

Veronica, free tapas have been my lunch in quite a few places. I don't eat much during the day so it works perfectly for me to have that little dish of something with my wine. Salamanca is another good spot for the Free Tapa and I have a couple of places in Madrid I like to go to... I am due for a visit to Granada and when I go I will post here for some tips!
GrapeHops Tours
Poptarticus - my sometimes travel blog
V

Shannon said:
I am due for a visit to Granada and when I go I will post here for some tips!
Click to expand...

I can't remember anywhere outstanding for tapas in Granada city, but I haven't spent much time there. I prefer Malaga and Seville.
Veronica in France
La Recette du Jour
Twitter: veronicafrance
You must log in or register to reply here.
Share:
Email Share Link