We had wanted to visit Granada for a long time and finally booked an Easyjet flight from Milan Malpensa to Granada for 5th to 14th March 2019. The journey by bus from the airport to the centre of Granada is straightforward. Granada's airport is really small so it took just a few minutes to get off the plane, through arrivals and onto the bus which was waiting just out of the door to the right as we came out of arrivals. A long wait ensued as the bus leaves once the driver is sure that everyone who was on that flight and wants to get the bus has indeed done so, including people who have lost luggage/relations/co-travellers/ need a cigarette first.

It's about a 40 minute journey into the centre of Granada, more for the stops and unloading people's luggage than for the actual distance. It costs 3€ per person each way. We got off at the Cathedral stop from where it was just a short walk to our Airbnb apartment near Santo Domingo cathedral. This was a very comfortable and well equipped studio apartment right in the centre, very good value for money at just under 40€ per night for nine nights. We had a very friendly and enthusiastic welcome from our host. What was left of the day was spent getting our bearings and stocking up on food at Mercadona.

The weather forecast for the next day was pessimistic but in the end we were able to explore the centre, which we liked immediately although the Mercado de abastos was small and pricy instead of the usual spectacle of local produce and fish that we'd seen in other cities in Andalucia, especially Malaga for example. After lunch we walked up to the Alhambra, just a 20 minute walk up Cuesta del Realejo and visited the Carlos V Palace museum and art gallery which are free and well worth a visit. The objective of the afternoon was also to get our bearings and work out where to go for the Nasrid Palace visit etc the next day. we finished the day with a free visit to the Royal Chapel. If you stay at least a week, except for the Nasrid Palaces - Generalife - Alcazaba, practically everything can be visited for free one day or another. The rain finally started in the early evening and so we called it a day.

Thursday was the Alhambra day and we dedicated the whole day to the visit just stopping off for an immense vermouth and tapas at Bodegas Castenedas in the evening before going home. The Nasrid Palaces are spectacular and we spent nearly two hours, really only forced out because it was really cold. The official Alhambra leaflet blithely says the Alhambra is fresh in summer and cold in winter and since I live in the Alps I took not the blindest notice. Foolish, cold is cold even in Granada! So we visited Nasrid in the morning, then went 'home' for an early lunch and to thaw out. In the afternoon we visited the Alcazaba, the fortress area, nice but not spectacular, the Partal Gardens and the Generalife palace and gardens which are very beautiful. We spent about 45 minutes in the Alcazaba, taking it easy and about an hour and half for the Generalife, we also sat on a bench in the gardens and enjoyed the sun. 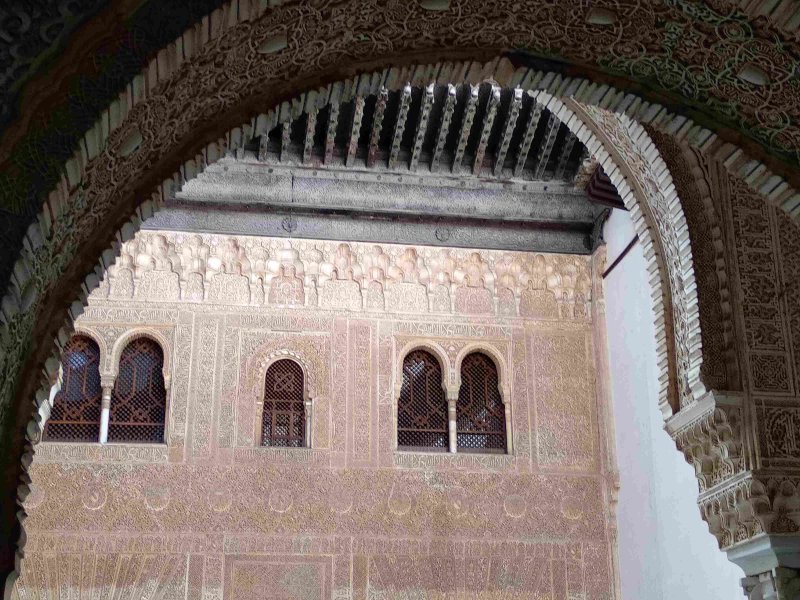 On Friday morning we explored the Albaicin area UNESCO world heritage site, and after lunch wandered around the centre and the Realejo área visiting various free attractions such as Casa de los Tiros and its spectacular carved ceiling and Corral del Carbon. The Albaicin is a pueblo blanco right next to the centre of Granada, beautful in itself every corner presents you with a splendid view of the Alhambra just oppsite. Each time we visited we liked it more, especially on Sunday morning first thing when it was completely silent and empty except for birds singing. 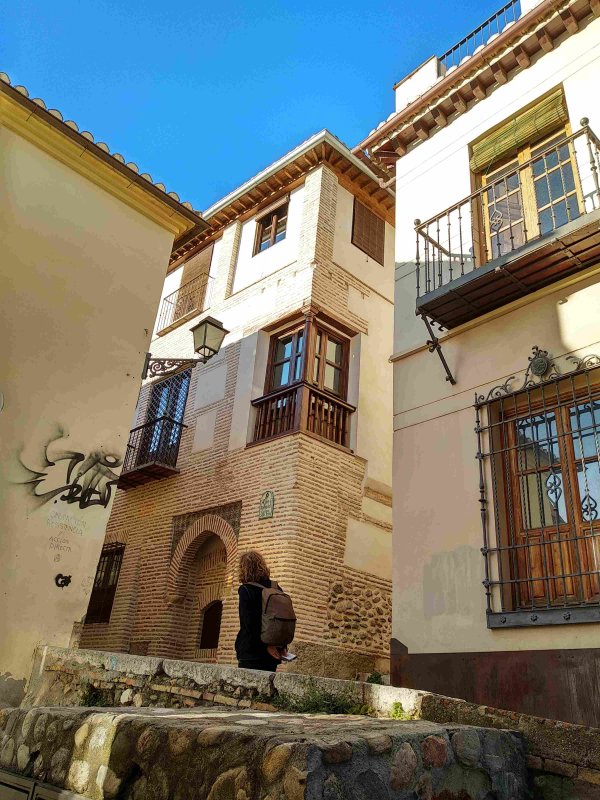 On Saturday we set off for a longer walk up to Silla del Moro, the old castle of which very little is left but which has more splendid vies of the Alhambra and also the Albaicin and Sacromonte areas. We carried on among woods and olive groves up to Llano del Perdiz at 1000m. It was nice to see the countryside and mountains around Granada, all on foot directly from the city centre. On the way back we stopped at Carmen de los Mártires Gardens which was one of our favourite places.

Sunday is the day that the Dobla D'or monuments are open to the public free of charge so we went back to the Albaicin to explore Palacio del Dar-alhorra, Banuelo and the others in the morning. In the afternoon a stroll around the centre and a free visit to the cathedral before going back to the Albaicin for the sunset.

On Monday we walked to the Sacromonte abbey and explored the Sacromonte area in the morning and in the afternoon after some shopping were back in Albaicin to also go up to the Eremita di San Miguel for the sunset. 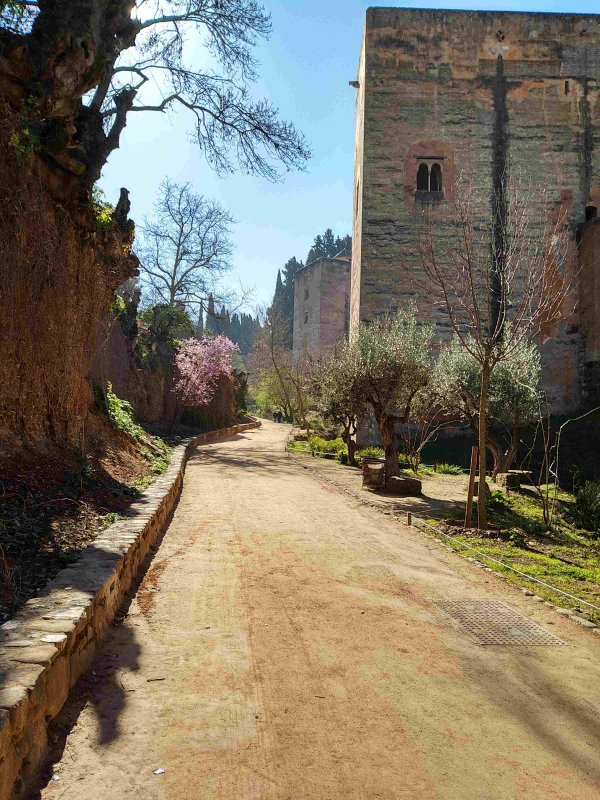 Tuesday was dedicated to visiting the centre from Plaza Bib-Rambla, to the botanical garden, Hospital Real and the Calle Elvira and Calderia areas in the morning. In the afternoon a long walk from Plaza Isabel down the treelined Carrera de la Virgen to Paseo del Salón, a pleasant walk along the river and then up to Carmen de los Mártires Gardens for a rest.

Wednesday was our last day and we went in the other direction to see Alcazar del Genil (definietly worth the visit) and Garcia Lorca's summer residence at Huerta de San Vicente (probably not) as well as some last shopping in the morning. In the afternoon a last look at our favourite places so through the Albaicin to a small but beautiful Mirador in the Sacromonte area where we bask in the sun looking at the Alhambra for a long rest before going back down to Paseo de los tristes and then up Cuesta del Rey Chico to Carmen de los Mártires Gardens, where there was a classical guitar concert and a small exhibition of guitars had just opened. 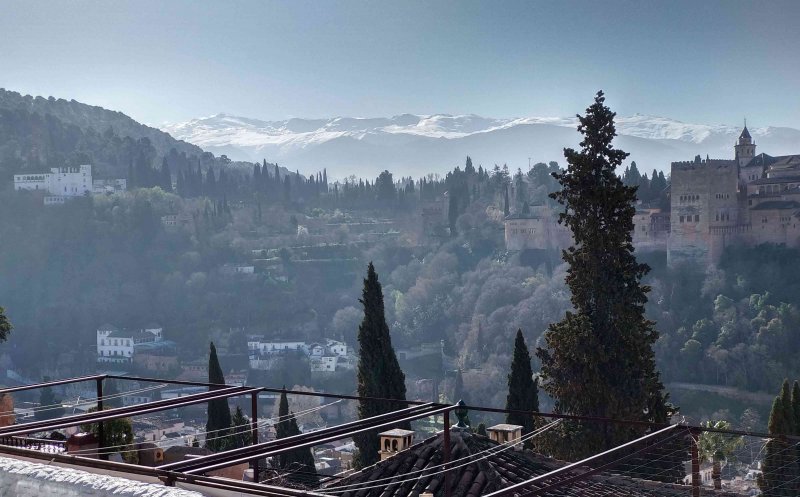 Apart from the rain in the evening on the first day the weather was always bright and sunny and temperatures ranged from surprisingly chilly first thing in the morning to shortsleeved t-shirt weather many afternoons. Nevertheless in general we appreciated the fact that our apartment had central heating and was always warm and snug.

It was great to be right in the centre so really in 20 minutes walk at the most we could be at any of the main attractions.

We found Granada, like the other towns and cities we have visited in Andalucía, to be a very pleasant, safe and clean place to stay. People are friendly and don't seem resentful of the perhaps sometimes relentless amount of tourists which descend on their city.

We didn't really eat out much, since our accommodation was so central we found it more convenient to go home to cook something or rest, but Granada has an enormous range of places for tapas and everything else.

Before going we had looked into possible day trips using public transport but in the end there was so much to see and do that we didn't have time. Granada is also an excellent city for just wandering around so we could easily have spent longer there. An ideal slow travel destination.

If you stay for longer you're not in a hurry to see everything against the clock, you can take it easy, you've got time to go back to a place you particularly liked. You've got time to stop off on the way to wherever you were going because something catches your eye. Yes, some people 'do' Andalucia in a week. We enjoyed staying in Granada for 9 nights, we will remember the places we visited and sometimes revisited slowly, it was a great place to discover.
slow travel in Italy and Spain
natureandart.it

I’ve enjoyed reading your posts about Granada and Andalusia. We’re planning a 5 night stay in Granada in December and are considering the same Airbnb you stayed at. The view of the church is charming.

Thanks Lucy. About the accommodation I can recommend it. There's triple double glazing, so really quiet, friendly host, central heating is generous, very good value for money, (our budget is never enormous because we like to get around a lot!) and especially the convenient position.
slow travel in Italy and Spain
natureandart.it
You must log in or register to reply here.
Share:
Email Share Link