Sights of the Southern Rhine

This is the first time I’ve chosen a holiday to match the dates I want. Usually it is the other way round and the destination is more important than the dates. It was the summer holidays and daughter and family were away for a week so I was free of grandparenting commitments and it was too good a chance to miss. I did a google search for holidays for the dates I wanted and soon realised that unless you were after an all inclusive resort holiday, many companies avoid the summer holiday period. The only holiday that appealed for the dates I wanted was ‘Sights of the Southern Rhine’ with Titan Travel. I decided to go for it, especially as Titan offer door to door transport.

It is the first time I’ve done a river cruise and it was a steep learning curve. I was lucky and chose well. I liked the boat A-Rosa Viva which took 198 passengers, a manageable number. Staff were excellent and so was the food. The atmosphere was friendly and informal, as was the dress code. 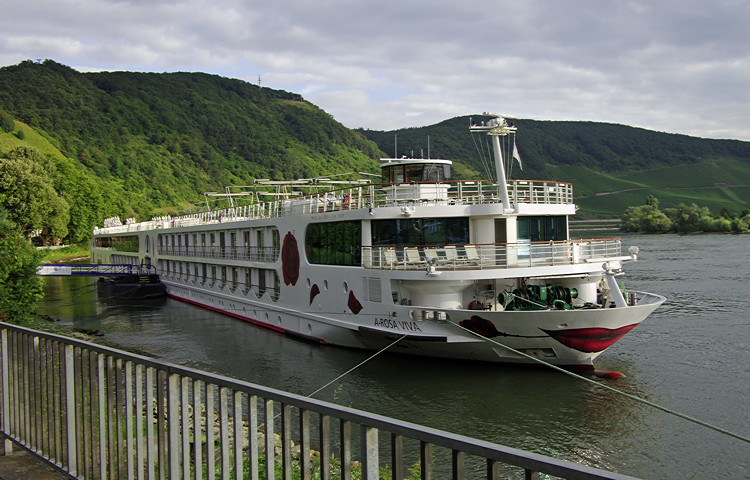 This was also my first trip to Germany and I loved all the small towns and villages along the Rhine, much preferring them to the larger cities. The weather was glorious and I spent all my time sitting on the sun deck watching the scenery float past. It was very relaxing, especially with a Hugo Spritzer. Meals were all buffet service, so I collected mine and ate on the sun deck, often in solitary state at breakfast time.

There were activities provided on the boat, but I didn’t bother with any of them - all I wanted to do was watch the scenery. This may seem a silly thing to say, but I hadn’t realised the Rhine was such a big river. It was busy with river cruise boats as well as a lot of cargo barges. I hadn’t expected the locks either. 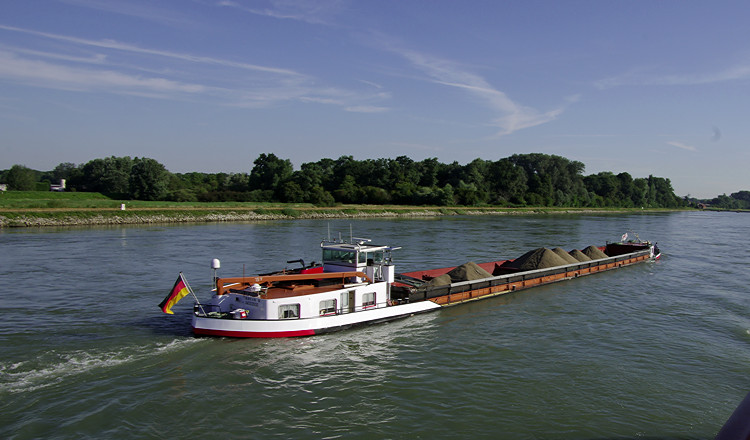 The cruise started at Cologne in the early evening of Day 1 and we woke next morning in the Rhine Gorge with its steep wooded hillsides and fairytale castles. The first port of call was the delightful medieval town of Boppard with its flower lined streets and the twin towered St Severus Church. This is a popular call for the river cruises as well as shorter cruises along the gorge. I would have liked longer to explore here with the remains of a Roman fortress, old gateway through the walls, timber frame houses, St Severus and the Carmelite Church. After Boppard, it was a leisurely cruise through the Rhine Gorge and this was the only time everyone was out on the sun deck admiring the stunning scenery. Large white kilometre markers along the banks marked our progress and were useful for later identifying the small towns, many still with their medieval walls and dramatic castles above. 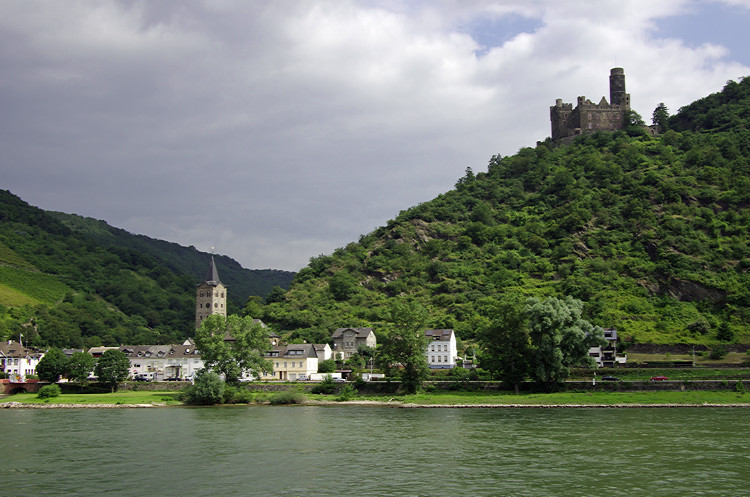 There was a road and railway running along both banks of the river and I was amazed by the amount of rail traffic from two unit diesels to double decker trains and very long freight trains. There were no bridges but several small ferries linking both sides of the river.

The highlight is the Lorelei Rock, made famous by the song and the legend. If it wasn’t for this, it would be like any other tree linked hunk of rock along the river and I have to confess that I wasn’t as impressed as I probably should have been. Beyond, terraced vineyards started to appear on both sides of the river. Gradually we sailed out of the gorge. The river valley became much wider and more gentle. We lost the steep hillsides and most of the smaller settlements were now hidden behind the trees. The mountains of the Black Forest could be seen in the distance beyond the trees. We encountered our first lock on Day 3. There was quite a crowd at the front of the boat as it nosed its way into the lock with only inches clearance between the boat and the side of the lock. 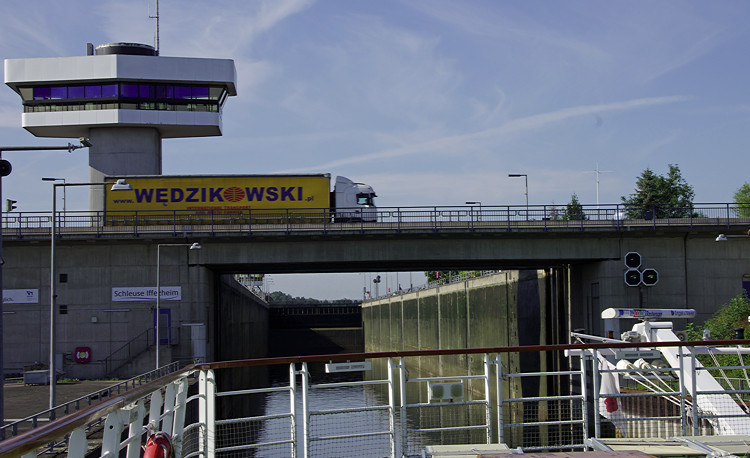 After lunch, we docked at Kehl, a modern German city, just across the river from the French town of Strasbourg. We had an included city tour of Strasbourg in the afternoon. This included a drive around the European Parliament buildings and Courts of Justice and the German area with its very splendid German style houses with storks nesting on the chimneys. This was then followed by a walking tour through Petite France with its timber frame buildings and canals, ending up at the Cathedral, where we had some free time. The local guide was repetitive and not very informative and I remembered why I disliked organised tours. I decided to skip the rest on offer. We were berthed in Kehl until after lunch on Day 4. Although there was a train service from Kehl, I decided the timetable wouldn’t give me enough time to justify a visit. I decided to spend the morning in Kehl instead, as this would also give me change to see a typical German town. I liked the wide tree line streets, market place with a fountain that looked like a dandelion clock and stylish houses. Unlike Strasbourg, it was quiet with very few foreign tourists. I walked across the new footbridge linking the German and French sides of the river; the boundary is down the centre. I also enjoyed the church of St. Johannes-Nepomuk with its tall white tower dominating the town. I was let down by the weather in the afternoon which turned into a steady drizzle with poor visibility.

Day 4 dawned bright and sunny again and we docked at Basel just after breakfast and had the whole day there.

There was an included city tour in the morning. I used the coach to get me into Basel but then left the group to explore under my own steam and made my way back to the boat later. Overall I was disappointed by Basel which I found a rather uninspiring place, although immaculate with no litter or obvious graffiti. Careful traffic management means there is little traffic in the city centre although there are trams zipping everywhere. Buildings were large and painted plaster. Unlike Strasbourg there were no timber frame buildings and the only really impressive building was the Rathaus in the Market Place, which had more eateries rather fruit and vegetable stalls.

The Cathedral is an impressive building from the outside, but less so inside, apart from the heavily carved choir stalls and paintings on the ceiling in the crypt. St Peter’s Church also has wall paintings and was worth finding.

Day 5 saw us at Breisach for the morning. This had been badly damaged by bombing in the Second World War and has been rebuilt, although parts of the city wall and gateways survived. Unlike many British cities, it was rebuilt in the traditional style of architecture and is a very attractive place with its brightly painted houses. St Stephen’s Cathedral is built on the top of a rock and dominates the town. From the outside this looks like a perfect C12th building. Inside, the only part to survive the bombing was the west end which still has its medieval wall paintings. The rest was rebuilt and again the modern architecture melds seamlessly into the old. Day 6 started early at Mainz at breakfast time. It was just a few minutes walk into the city centre. Again this is a very attractive large German town with some splendid buildings and the most amazing market - reputedly the best in Germany with stalls of fruit, vegetables and flowers. There was even a stall just selling different varieties of potatoes. 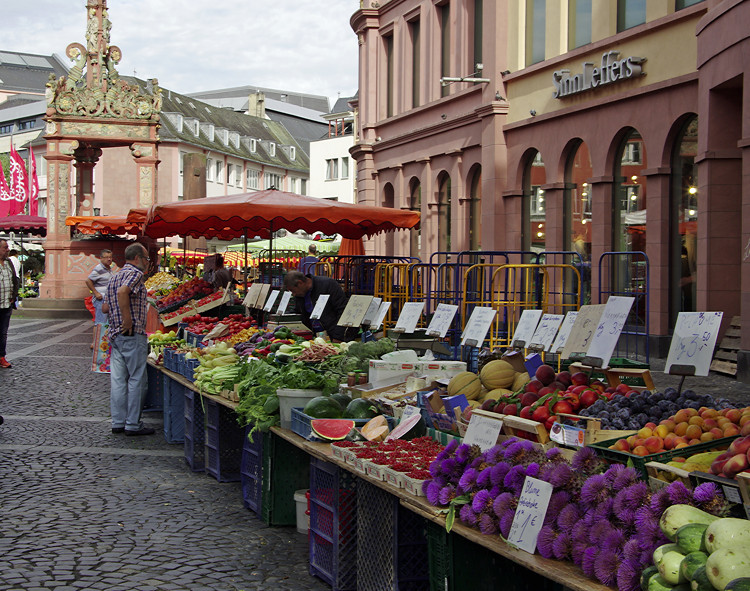 The Cathedral also has the WOW factor as soon as you walk in with gloriously carved statues and memorials on all the pillars and side altars with carved reredos. It is most unusual as it has two chancels; one at the east and another at the west. I didn’t have time to visit the Gutenberg Museum, although those that did said it was well worth a visit.

After leaving Mainz, we sailed back down the Rhine Gorge, past Boppard towards Koblenz. We should have stopped here, but all the docking areas were fully booked, so we continued to Andernach instead. A courtesy coach was put on for passengers who wanted to visit Koblenz. I asked the Titan guide what there was to see in Koblenz, he thought about this but all he could come up with was Deutsches Eck, the flat promontory at the confluence of the Moselle and the Rhine with the statue of Kaiser Wilhelm I. I decided to give Koblenz a miss, especially as the coach wouldn’t be back at the boat until 9pm. I went to explore Andernach instead.

This is a delightful walled town still with its gateways. Vegetables, fruit trees and wild flowers are planted outside the walls. It has a splendid C11th church. I slipped in during Mass and sat quietly at the back soaking up the atmosphere. We arrived back at Cologne just before breakfast on the last day and left the ship at 8.30 to begin the journey back home.

I really enjoyed the break and found it very relaxing. Unlike the big ocean cruise liners, the dress code is much more casual on river cruises and few people dressed for dinner. I decided I could get used to this sort of holiday as long as the weather allowed me to spend all my time outside.

My full report with all the pictures can be found here.
Last edited: Mar 4, 2017
http://wasleys.org.uk/eleanor/index.html

Just found this report and very timely. My wife and I, along with three other couples, just booked a Christmas Market Rhine Cruise (Basel to Amsterdam) for early December. I do not think I will be spending as much time on the sun deck as you did, but hope to capture some great winter scenes along the river.

In Strasbourg, I am hoping to find my great-great grandfather's grave. No one in our family has return to Strasbourg since my great grand father left in the 1870s. I have a few leads I need to run down between now and December to pinpoint the cemetery.

Look forward to reading full report in the very near future.
"Though we travel the world over to find the beautiful, we must carry it with us or we find it not.” - Emerson

I hope you found my report helpful. It should be lovely seeing the Rhine in winter. Good luck in trying to find your great great grandfather's grave.
http://wasleys.org.uk/eleanor/index.html
You must log in or register to reply here.
Share:
Email Share Link