This Fall was our 5th time visiting Europe (2nd time to Czech Republic, 4th time to Italy) and the first since we retired. The previous trips have all been during high season with rental cars. We decided to see if we could do a monthlong trip without a car. It took a bit more advance work planning transportation, but was well worth it. On past trips we’ve done the “must see” sights and museums. This time we would return to a few of our favorites, but also set aside time for new experiences, some with local guides.

Normally, we fly open jaw to save time and money. However, I was able to get a great price on round trip, business class SFO-MXP. Even adding in our short hop flight from Milan to Prague on Czech Airlines, it was cheaper than any prices I found using open jaw or one-way searches.

A genial young man, Michael, from Comfy Prague Transfers picked us up at the Prague airport for the ride in his Mercedes sedan to Plzen. After a little more than an hour’s drive through the countryside, we arrived in Plzen, Czech Republic, where they've been brewing beer since 1295. It is the birthplace of pilsner beer and home to the Pilsner Urquell brewery. I brew beer at home, so this was Disneyland to me. A special tour of the brewery takes you into the underground cellars where the first pilsner was brewed in open vats and conditioned in 50 hectoliter (1300 gals.) wooden barrels. They have a modern brewery above ground, but they still brew a relatively small amount of beer the same way it was done when the brewery opened in 1842. One of the brewers tapped a barrel for us and we got a taste of unpasteurized, naturally fermented history. 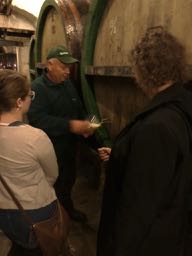 Central Plzen also has a complex network of underground tunnels, wells, and rooms dug in the Middle Ages. You can enter by a door in almost any house and come up almost anywhere inside the city walls. Over the centuries they have been used to store food, ferment beer, hide from invaders, and organize against Nazis and Soviets. We just toured the part highlighted in red (hard hat required) and that took almost an hour. 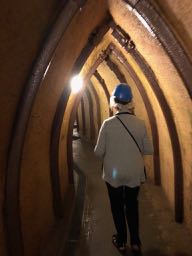 Traditional Czech food is not exactly low cal, pretty much always meat and potatoes in some form with a beer. One full meal a day was about all we could handle. That's a pork knee roasted in dark beer for 4-5 hours. It tastes wonderful and is inexpensive. Dinner for two usually ran about $25-$30. Half liters of beer go for $1.50 to $2.00. 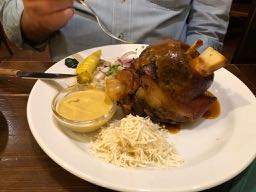 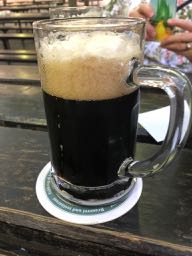 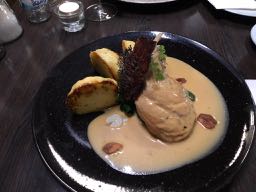 After a couple of days in Plzen we returned to Prague by train. The main station has been redone since our last visit and is a good deal easier to navigate. Coming into the main hall from the platforms, we found the DPP ticket booth and purchased our Metro passes. Then down the stairs and off on the underground to Mala Strana and the Hotel Julian. We chose the Julian again because it is away from the hustle and bustle of the Old Town, yet within a block of the tram and bus stops. The rooms are nice, the staff very helpful, the breakfasts delicious. 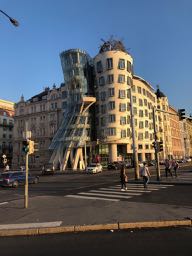 One of our many highlights was a Taste of Prague tour, making our way around the city with Jan, enjoying traditional Czech fare and gaining a deeper understanding of Czech culture. Jan grew up during the Soviet occupation and has witnessed firsthand the dramatic changes in his country. Some things we discovered over dinner: Prague has 1.25 million people, similar to San Francisco, but without the homelessness or violent crime. They have a sales tax of 21%! A few of the things they get for that: great universal healthcare, free public education through college, if you get an MA or Phd., they reimburse all expenses and (drum roll, please) three years maternity leave, PAID! Their urban transportation is the envy of any large city--light rail, bus and subway are interconnected, clean and safe. Even if we missed one, we never had to wait more than five minutes for the next to come along.

We are big fans of Alphonse Mucha. He did a lot of commercial art at the end of the 19th and beginning of the 20th century. However, his greatest works were civic art. Much of it was created to express the uniqueness of Slav culture and to celebrate Czech heritage in the face of political domination by Austria-Hungary and then Germany. He incorporated the stories of Czech history into his paintings and architecture. These are shots from his window in St. Vitus Cathedral and the Municipal House (first seat of the Czech government after the Treaty of Versailles). We were able to see part of his Slav Epic, a series of 21 monumental canvases. Sorry, they wouldn't allow photos, but you can find them online.