Ortigia, a visual and gastronomical treat

Ortigia is the historically rich island area of Siracusa in Sicily. It was founded by the Greeks and is the site of a beautiful romantic myth of antiquity, that of the nymph Arethusa and her lover Alpheus. Their union is celebrated in the Fountain of Arethusa, noteworthy because of its fresh water emerging at a few meter's distance from the sea. 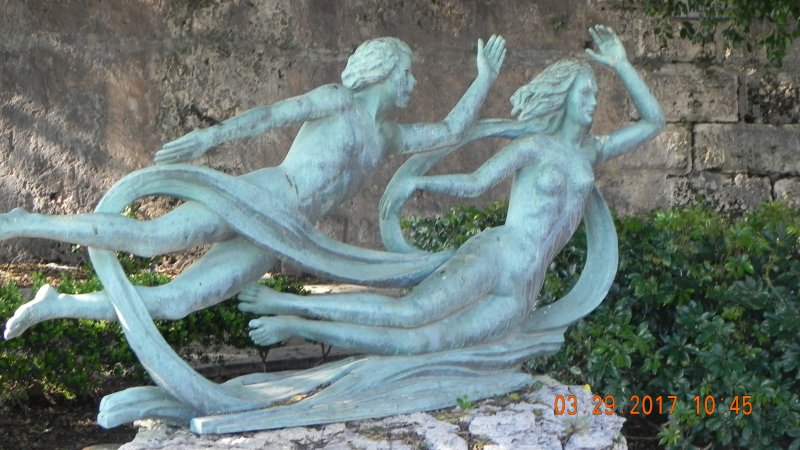 We enjoyed walking through the small medieval streets and piazzas until reaching the breathtaking beauty of the Cathedral Square, the Piazza del Duomo. We reached it at dusk and were enthralled by the luminescence of the white marble clad buildings. The Duomo has striking baroque face that dominates the square. But it is more. It has its special solid sturdy beauty. It is not a high flying gothic cathedral of cooler climes. It has the rectangular sobriety of the original Greek temple of Athena on which it was superimposed. The original temple columns were filled in to make the walls of the cathedral. This was a striking discovery for me. The next was to see the changes imposed by the Normans after their defeat of the Saracens in the 11th century a.d. It is an example of the Norman dual purpose cathedral, half place of worship, half fortress. This is strikingly evident in the crenelated roof line with defensive positions for defending archers. 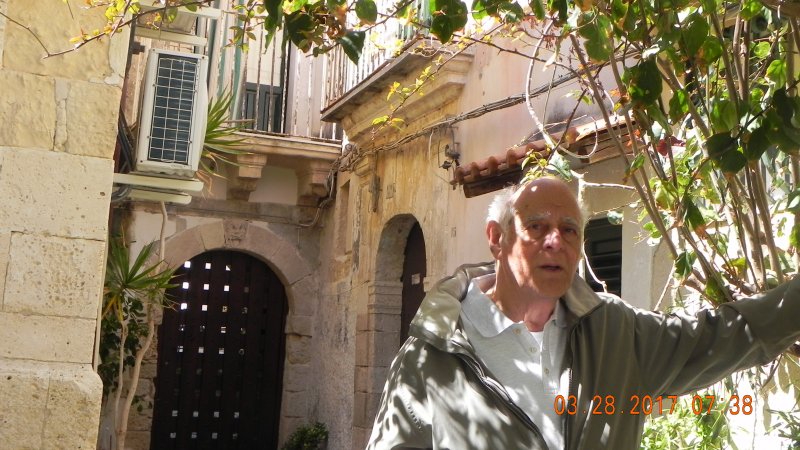 A walk through La Giudecca, the ancient Jewish quarter is a highlight of a visit to Ortigia. You peek into one flower covered courtyard after another, uncovering ancient weatherbeaten doors and perfect picture postcard angles and vistas.

Get as close as you can to island side of The Castello Maniace, a citadel and castle first built in the 11th century and finished in 1240. It’s massive presence on the tip of the island is even more impressive from the sea in a one of the many boat tours available.

As we explored Ortygia, we were lucky enough to bump into the Tavernetta di Piero. You can't miss it on Via Cavour, a lively street in the historic center of Ortigia. We entered and were greeted by the family that is the staff of the unassuming little place (Tavernetta is a diminutive noun). The first thing to comment about this local gem is the menu. In all our time in Sicily, we never saw a more complete menu which provides the chance to try all the variations of fried, sautéed, baked or boiled fish or meat dishes, as well as many vegetarian main and side dishes. Their motto describes it well: siciliana tra mare e monti, Sicilian dishes "Between the Sea and the Mountains". 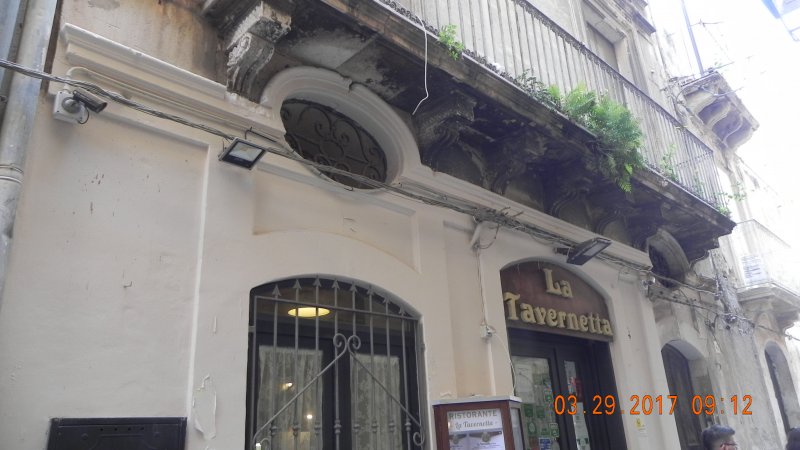 Just as in the rest of Italy, a complete meal has an appetizer, a first course the "primo piato", a second course the "secondo piato" and dessert the "dolci." For my appetizer, I had Linguine ai ricci di mare, flat linguine pasta with sea urchin. I had never eaten sea urchin. I had heard about it being very special. It was. Maybe because they were in season for our visit in late March. We had just seen a man in the market cutting them open and selling little cups filled with them. My wife had a Tuna Carpaccio; she marveled that it was so different from the canned tuna we get in the US. It was firm and cool on the palate.

My first course was paccheri (a thick flat pasta) with shrimp and a ground pistachio sauce. The shrimp were fresh and their briny taste blended well with the pistachio sauce. I learned that pistachio and almond are used in a lot of Sicilian sauces and pestos. My wife had Gnocchi mare e monti, (“sea and mountain” the same restaurant concept as “surf and turf” in the US) gnocchi with shrimp, mussels, clams, squid and mushrooms.

For my secondo piato, I enjoyed pesce spada alla marinara, not the US pizzeria “marinara tomato sauce’ but a basic plate with a generous fillet of swordfish with olives, capers, and oregano. What can I say? Fresh fish is good eating! Swordfish is popular because of its firm flesh and no bones. Eat with a clear conscience; the latest UN studies on Mediterranean fishery report that the swordfish is holding its numbers.

My wife wanted a whole fish. She had trouble deciding between having it in a white wine, lemon, mushroom, ground almond, ground pistachio or cream sauce. She settled for spigola alla griglia, a grilled sea bass. You can’t go wrong with a hot grilled fish served steaming hot with crispy skin.

We ate seafood because we were in the middle of the Mediterranean but many meat, cheese, and vegetable dishes were also available, Veal, Beef, Chicken grilled or stewed or creamed with different combinations of eggplants, onions, mushrooms, eggplants, olives, eggs, zucchini flowers. 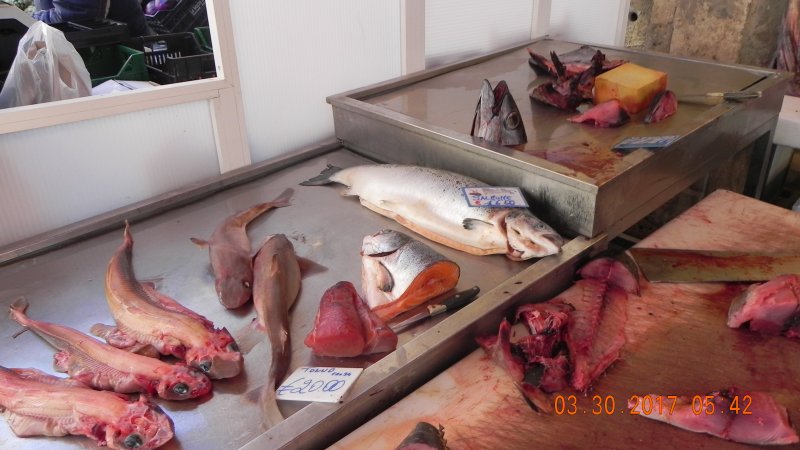 It was a great meal with a reasonable price, made even better by the new friendship with Piero and his family. Don’t miss it. Address: Via Cavour, 44, 96100 Siracusa SR, Italy. Phone: +39 0931 66385 Email: latavernettadapiero@live.it A very nice review, thanks for posting. Certainly made me look the place up, as I had not been aware that there was an island opposite Siracusa. Please add some photos of yours if you get a chance.


Frank Gerace said:
What can I say? Fresh fish is good eating! Swordfish is popular because of its firm flesh and no bones. Eat with a clear conscience; the latest UN studies on Mediterranean fishery report that the swordfish is holding its numbers.
Click to expand...

I'm afraid that on this matter, things are not that simple. For sure, small scale fishing and the related businesses are an economical mainstay for part of the population all over the world. And having a special meal on a trip abroad is part of the enjoyment of travel and of connecting with the local culture.
But sustainable fishing is a hugely complicated issue, and most of the news is very bad. Swordfish from the Mediterranean is on the "Slow Food (Fish)" list of "Not On My Plate" - meaning that the population is dwindling, and that if you can't trace the source of the fish and its fishing method (i.e. if it was caught in a sustainable method), it is better not to order it.

"Slow Fish" is trying to find the balance in sustaining the culture of fishing - FWIW, anyone interested can read what they have to say here :
http://slowfood.com/slowfish/pagine/eng/pagina.lasso?-id_pg=110
Perhaps some of the info here is not up to date, but it gives "food" for thought.
One possible solution in the challenge to make fishing sustainable will be a trace-ability and certification process, like what is done in the organic food industry.

A lot can be accomplished through collective consumer efforts, and another guide for education on this is the Good Fish Guide :
http://www.goodfishguide.org/

A general universal recommendation might be : cut down on the amount of fish you have been consuming. Maybe indeed save the consumption for that special trip abroad...

You didn't mislead at all - on the contrary, bringing up the issue of "eating with a conscience" is definitely an aspect of travel, and worth discussing.

From the same source you cited, but further down :

"Overall Assessment Results
Projection
Outlook
The assessment of Mediterranean swordfish indicates that the stock is overfished and suffering overfishing. The stock has been in this state since the late 1980s because of the large catches in the 1980s and the selection pattern which captures many immature fish. Catches of immature fish remain high and the greatest mortality is suffered by fish of age 3.
...The level of the stock to be rebuilt, is contingent on the assumption on future recruitment which is highly uncertain. In order for rebuilding to start taking place there will be a need for substantial reductions in harvest."

So while stocks are stable - as the source mentions at the beginning - these levels are relatively low, and apparently not sustainable.

I think that the same approach that is successful in crowd-sourcing - very many people chip in a tiny bit, and thus create a change where one might not have occurred otherwise - is a good strategy to reduce consumption (of anything). If everyone reduces a bit, then more resources are left. No need to preach for total and rapid change - sometimes the tortoise wins. If mankind had started implementing this slow change a century ago, in the matter of fuel consumption for example, things would have developed better, IMO.
You must log in or register to reply here.
Share:
Email Share Link