Brittany A Week in Brittany

I have enjoyed reading about your trip with its super pictures. I loved all the old timber frame buildings that have survived in the towns.
http://wasleys.org.uk/eleanor/index.html

Alecto said:
Is there still an old basset hound wandering around Cancale? He or she was there two years ago keeping an eye on things. Always crossed streets on the striped walkways and wasn't averse to a good ear-scratch! Glad you're liking Cancale and the area. I can't wait to go back and you've got me inspired! Sorry you aren't fond of oysters.
Click to expand...

We didn't see him and we walked around town every day. One day there was a small dog wandering around and I could not see who it was with. He joined us at a cafe table (to eat croissant crumbs we had dropped).

Oysters everywhere! And everyone but us was enjoying them. Lots of good fruits and vegetables to eat though!
Pauline Kenny - forums administrator
Slow Europe - Instagram

Our last day, Friday, was cool still and overcast. We checked out of the apartment and drove through Saint Malo, over a bridge on the River Rance (the bridge is a large dam), to Dinard. Dinard sits across the channel from Saint Malo. It was difficult driving into the city centre and hard to find the parking lot. It made me appreciate staying in Cancale because it was small and easily managed.

We parked and finally found the waterfront (I had to resort to google maps on my phone). The waterfront is lined by large hotels and large homes that look like they date from the early 1900s. The hotels all face the sea but we walked between them to the beach to find a nice boardwalk that runs along the whole seafront and beyond. This is the coast path. The sandy beach is large and it looks like the hotels have changing rooms lining the boardwalk.

We walked out and looked directly across to Saint Malo. We turned around when we could see some of the coast to the west.

We left Dinard and went drove back over the bridge to Saint Malo, parking on the port side so we were close to the ferry terminal. Driving through this part of Saint Malo was more interesting than arriving from the east. To the east it is modern and suburban. This area was lively with shops and people out and about.

We had about an hour before we had to get in line for the ferry so we went into Saint Malo and this time walked along the ramparts inside the town.

We went to the sandwich shop we went to on Monday and got sandwiches to take out. Then we continued walking near the walls. I was looking for the place described in the novel "All the Light you Cannot See". The sea meets the walls in the north and some of the west sides of the town. Gates go through the walls in some places. At one point we went through the walls, followed a walkway and ended up on the sand (tide was out or we would have been in water) where we walked to another entrance back in.

We were in line for the ferry by 2:15, for a 3:15 departure. They tell you to arrive an hour ahead but then you end up sitting in the holding area for about 30 minutes before they board the cars.

The crossing is two hours to Guernsey. We were the last car off the ferry - how did that happen! You go through a passport check here. You go through security before you board each ferry. They usually look in the trunk and sometimes under the hood and under the car.

Steve drove this morning because I was navigating and he drove on Guernsey too, where we are back to driving on the left and back to British time.

We had about 30 minutes and drove along the coast a bit. The town at the port is large and looks like a British seaside town. We headed north through an industrial and port area until we got to a pretty cove away from the town. Then back to port and in the ferry line.

This ferry is three hours to Poole, arriving after 9pm and we won't be home until 10:30 or so. (I am writing this on the ferry.)

I don't like these Condor Ferries. They are small and you really feel the movement of the water. The ferries are comfortable enough (we upgraded our seats to an area with slightly bigger seats). But it is a long trip, including changing ferries in Guernsey. Next time we will try Brittany Ferries. They are larger and if we go to Cherbourg the journey is only four or five hours. Now that we realise the driving is fine for us we can do longer drives instead of using the ferry to have a shorter drive as we did on this trip.

The car did not fail again after that first day but I have it booked in for service. It may be nine years old but it only has 50,000 miles on it! We don't drive much.

Added the next day. We were both tired on Friday. We didn't sleep well the night before and it was a long day of travel. When the ferry pulled into Poole at 9pm and they announced for everyone to go to their cars, we could not remember where we parked. This was our fourth ferry (2 going out, 2 going back). You remember your spot by the color of the staircase and by upper or lower deck. We both remembered where we had been parked on the earlier ferry, but had no clue for this one. None! This is not like us - we usually pay attention to things like this. There are four sets of stairs to choose from and we picked one and looked at the upper deck and the lower. The cars are jammed together and we could not see our blue VW Golf.

I went up to a woman crew member and told her we had no idea where our car was. She asked us a few questions - did you go up a ramp? Steve said yes, I said no. What color was our car? Blue - like 50% of the cars on the ferry. I told her it was a VW Golf - like 25% of the cars on the ferry. She said, I remember you. It is on the upper deck, on the other side. We made our way between the cars, which all had people in them and some were starting up so it made me nervous wedging myself between them, then up the stairs to the upper deck, and there was the car! How could she remember when we didn't?

Steve remembered that she was the crew person who directed us into the spot. I noticed that crew walk around looking at all the cars, probably checking to see if any are empty. They must radio each other with info - but she wasn't talking to her radio when we were talking to her. Magic! We got to shout out our thanks as we drove out.

An hour's drive home and we arrived at 10:30pm when it was just getting dark. What a trip!! Happy to be in our own comfortable bed! 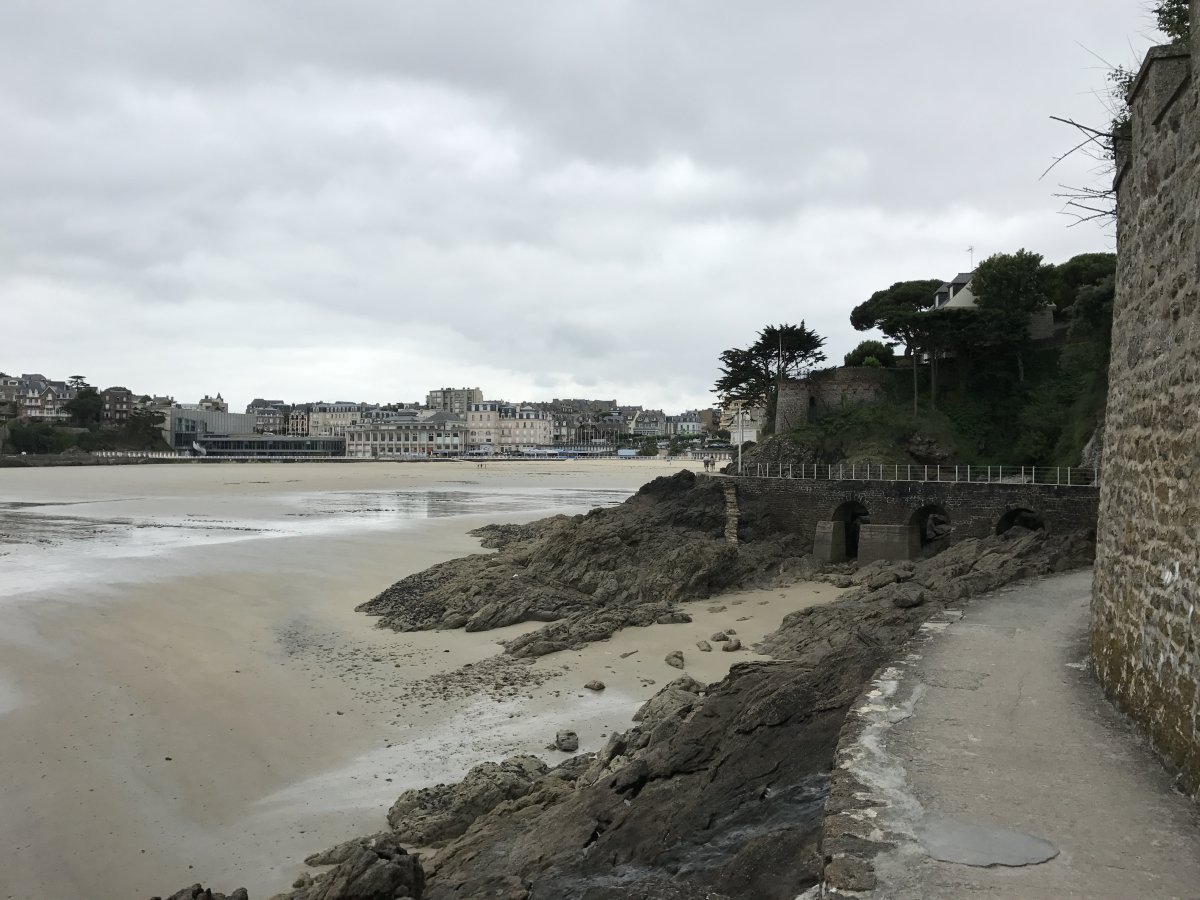 Walking the sea wall at Dinard. 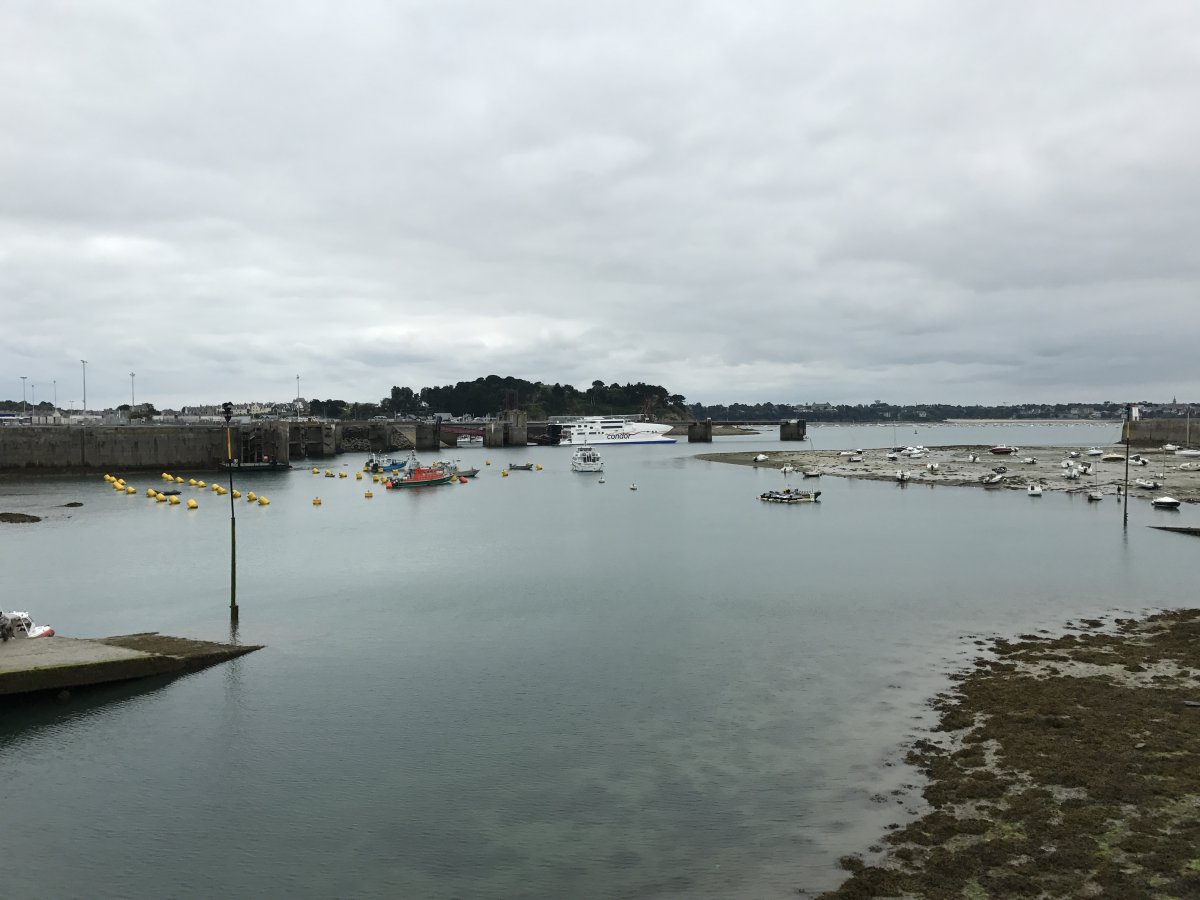 The ferry to Guernsey. The port is beside the historic center of Saint Malo. 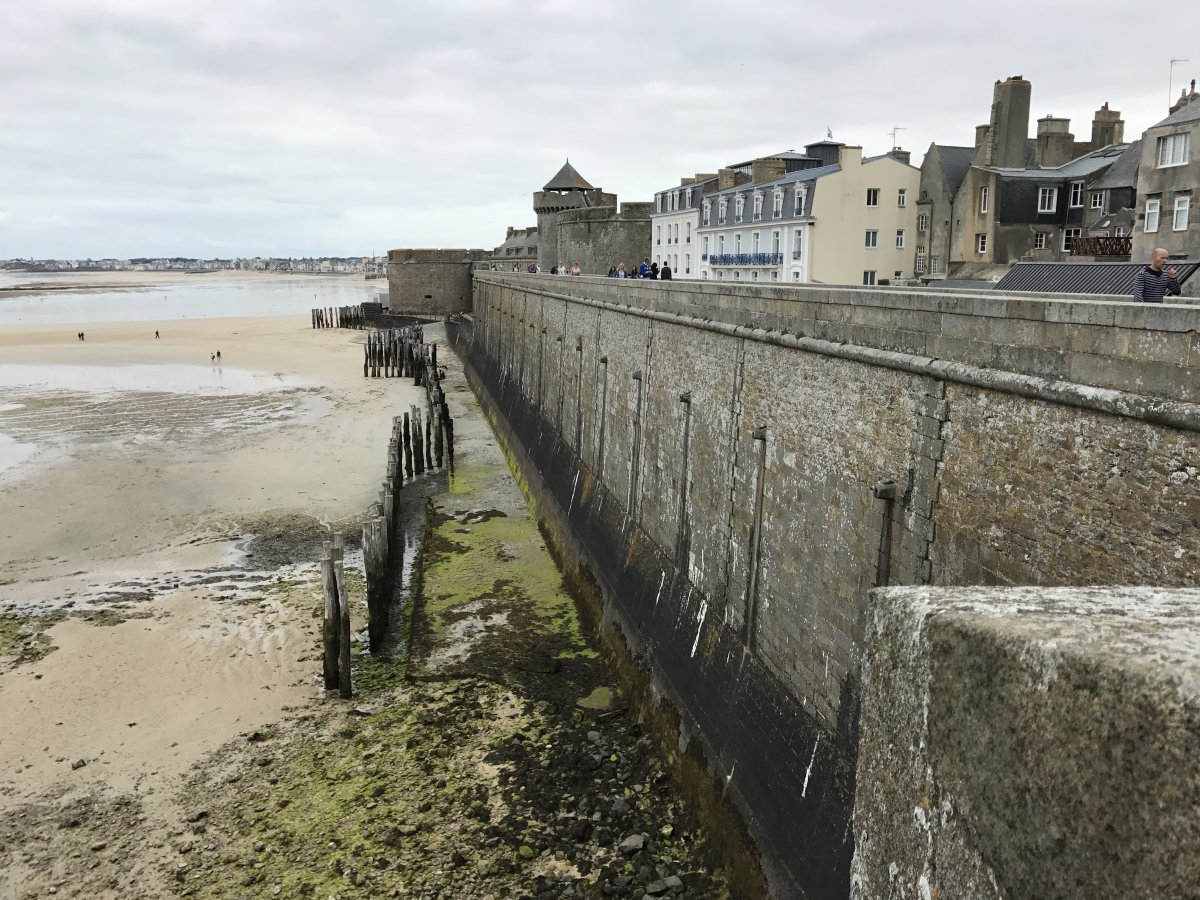 Where the sea meets the ramparts. Trying to see where a scene in the novel All the Light you Cannot See was set. 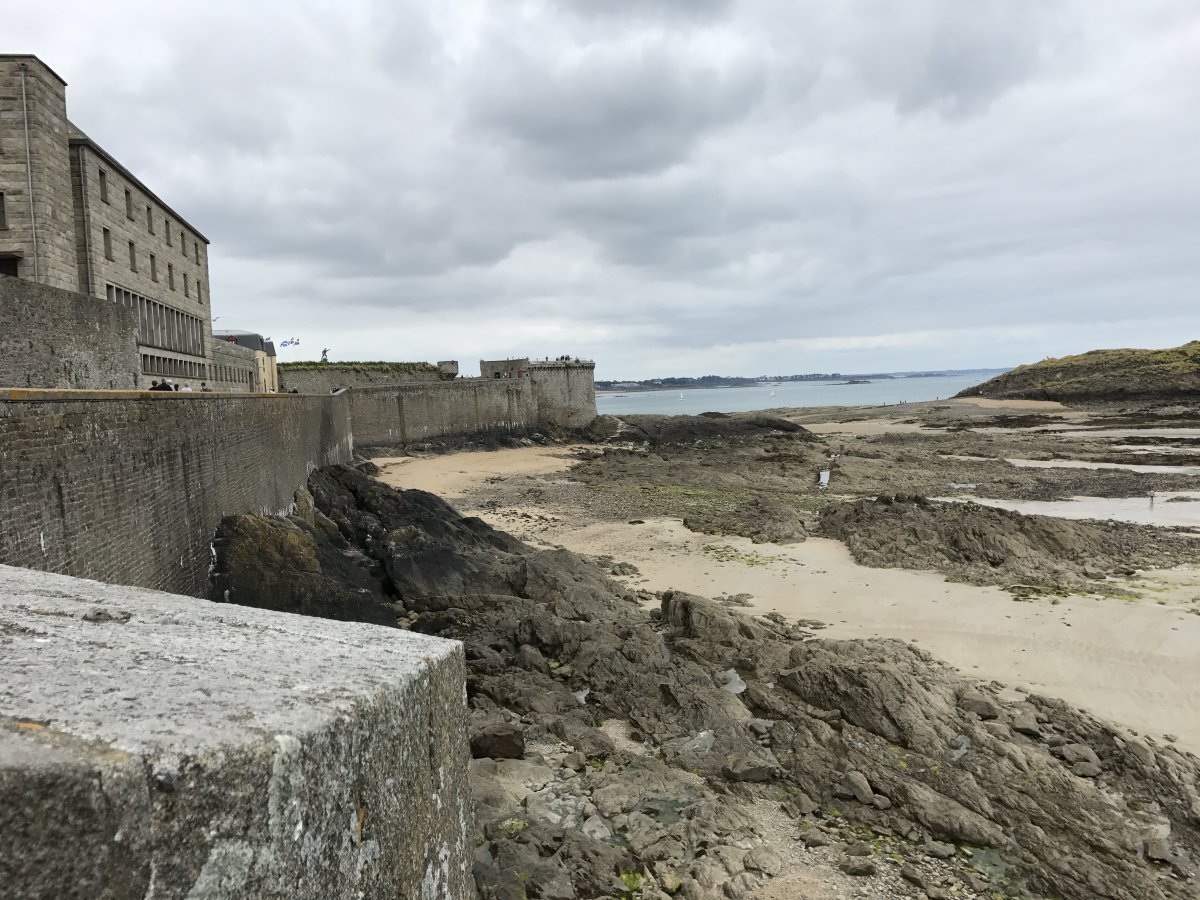 Tide is out but when in it would meet the walls. 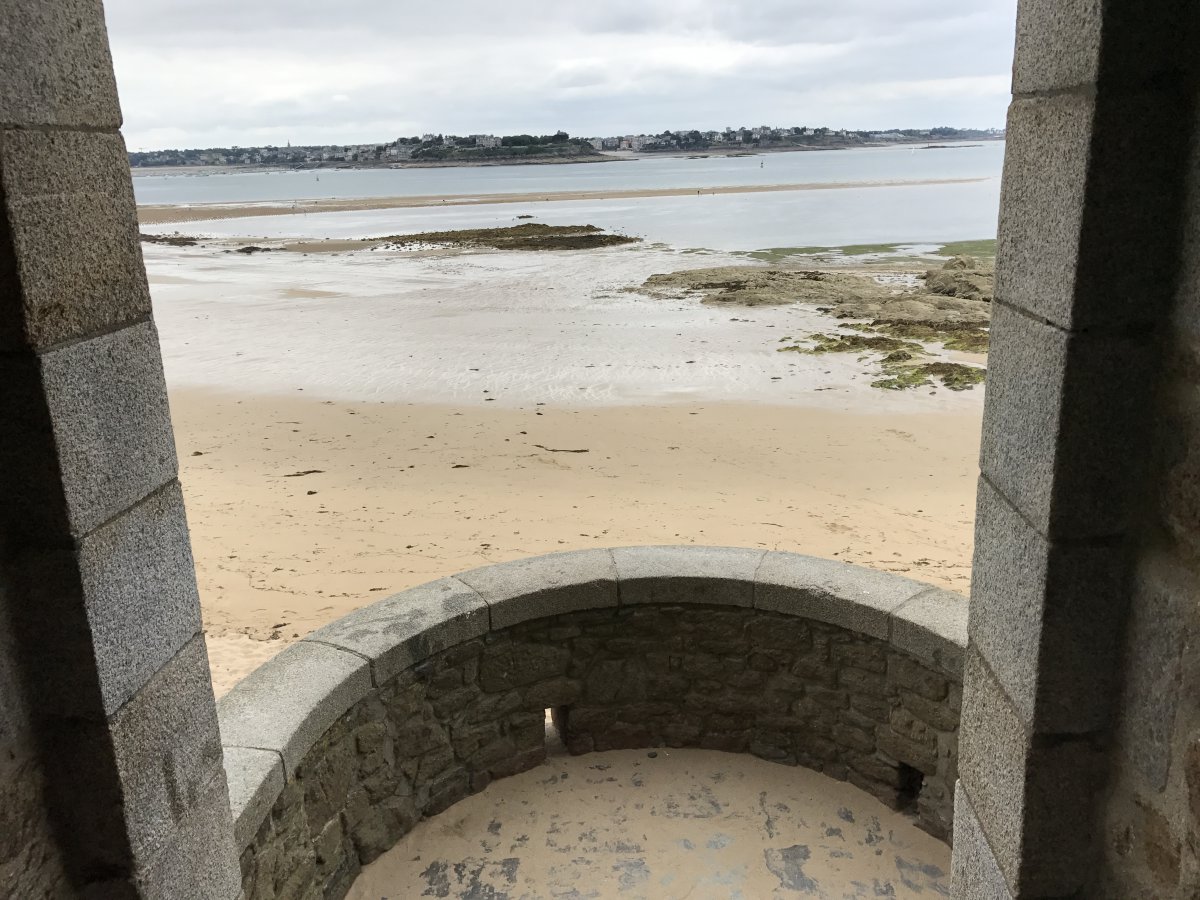 Lisa in Ottawa said:
All sounds so lovely.
Click to expand...

I loved "All the Light we Cannot See." I read that Anthony Doerr spent some time in the town while researching.
You must log in or register to reply here.
Share:
Email Share Link