One of the things I find fascinating about Europe and especially Italy are the castles. Real Castles! I take every opportunity in our travels to visit them whenever possible.

Our small mountain village does not have a castle but that does not mean you will not find them in our home region of Basilicata. Some of them date back to the time of the Lombards, but my favorites are those connected to southern Italy’s most famous ruler - Federico II.

Along the confluence of Campania, Basilicata and Puglia you will find the castles that may or may not have been constructed by Frederick; some where acquired and renovated by him, but were known as some of his favorites which he used frequently. The royal caravans and court would travel from the summer heat of Naples to the then heavily wooded district, and it is here where Frederick found some of his best hunting grounds for his famous falcons.

This area is best traveled by car and is well connected with the A16 to either Napoli or Bari and are listed in a circular route.

Melfi: The Melfi Castle is without doubt the most famous in the region. Erected by the Normans, it was later refurbished by the Swabians and Angevins. It was here, in 1231, that Frederick II issued the 'Augustales' Constitutions of the Kingdom of Sicily, the first written codified laws of the Middle Ages. It sits above the city and has a commanding view of the surrounding area. 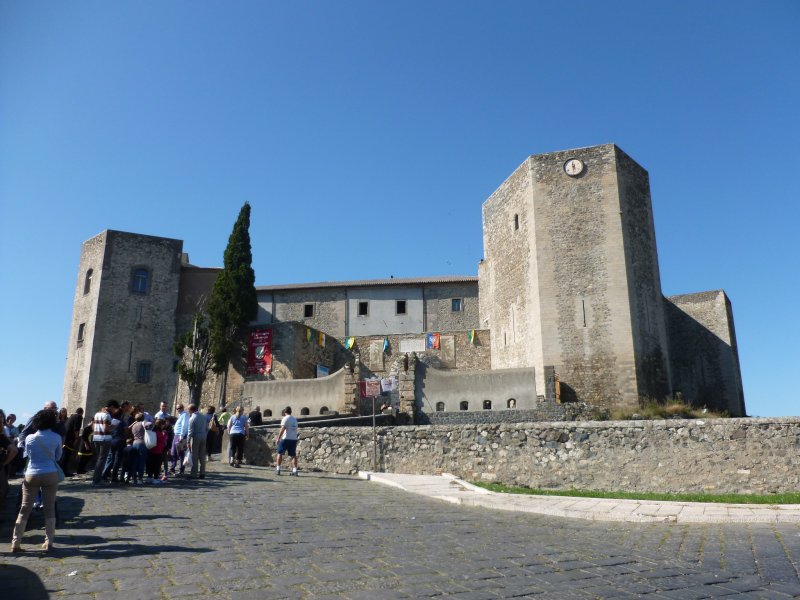 Lagopesole: While Melfi Castle is the most famous, Lagopesole Castle remains the most magical. You can still feel the spirit of the great Swabian Emperor Frederick II. It is supposed to be the last of the castles he had constructed for his own use, built between 1242 and 1250, completed the year of his death. Irsina: The old Montepeloso Castle was a Norman construction later altered by Frederick II in 1228. Today it appears much as it did in the 16th century when it became a Franciscan convent.

Hours: Interior not open to the public.

Genzano di Lucania: To the east of Genzano you will find the solitary Monteserico Castle where the Byzantines were defeated by the Normans in 1041. The castle was renovated and expanded by the Swabians and it seems that it was often visited by Fredrick II because it is the natural habitat of birds of prey, beloved by the Emperor.

Palazzo San Gervasio: Its name derives from the hunting domain of Frederick II. The Castle has been subsequently extensively renovated, but its style is still characterized by two square turrets, four mullioned windows and a three-column loggia. A small building for the stables from the same period can be seen along the side.

Hours: Currently not in use and no interior viewing

*From here you could make a side trip to Castel del Monte in Andria, Puglia. This is one of Federico’s most mysterious castles.
Last edited by a moderator: Feb 13, 2021
Click to expand...

100+ Posts · From Trivigno, Basilicata, Italy
Bryan and his wife Valerie moved to Italy in 2006 and settled in Basilicata in 2010 where they bought a house in the small mountain town of Trivigno. He helps those of Italian descent to discover their genealogy via MyBellaBasilicata.com.
You must log in or register to reply here.
Share:
Email Share Link