Ladakh takes your breath away

We spent our last few days of our holiday in Nimoo, an oasis about 45 minutes drive west of Leh.

Nimoo is typical of many of the small settlements in Ladakh and is found in a broad fertile valley with sheer bare mountain slopes. It is a large spread out settlement on both sides of main road with chortens and guest houses. 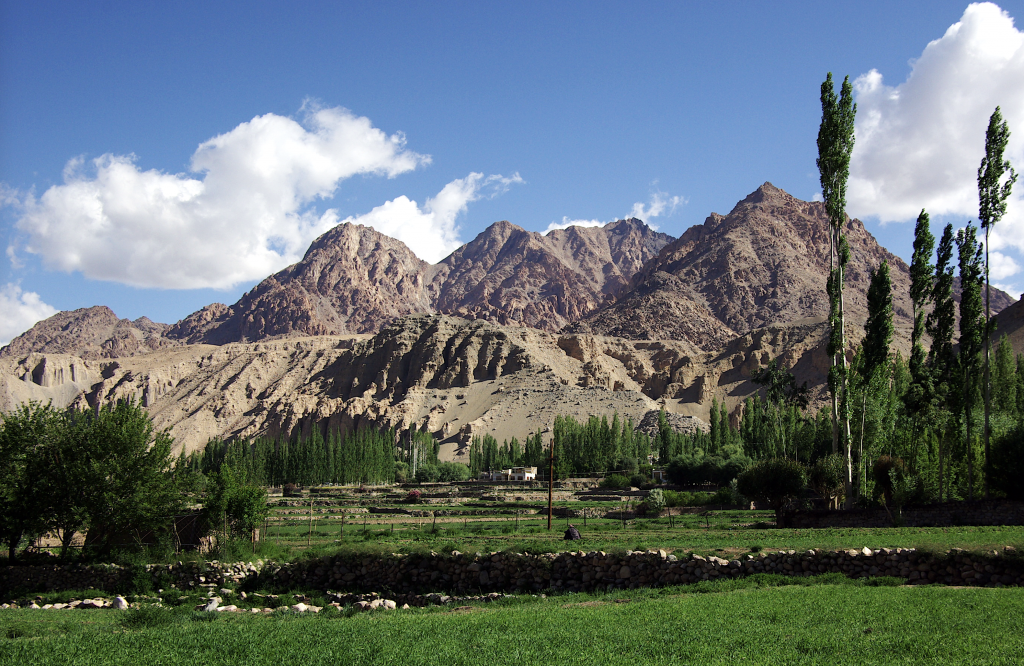 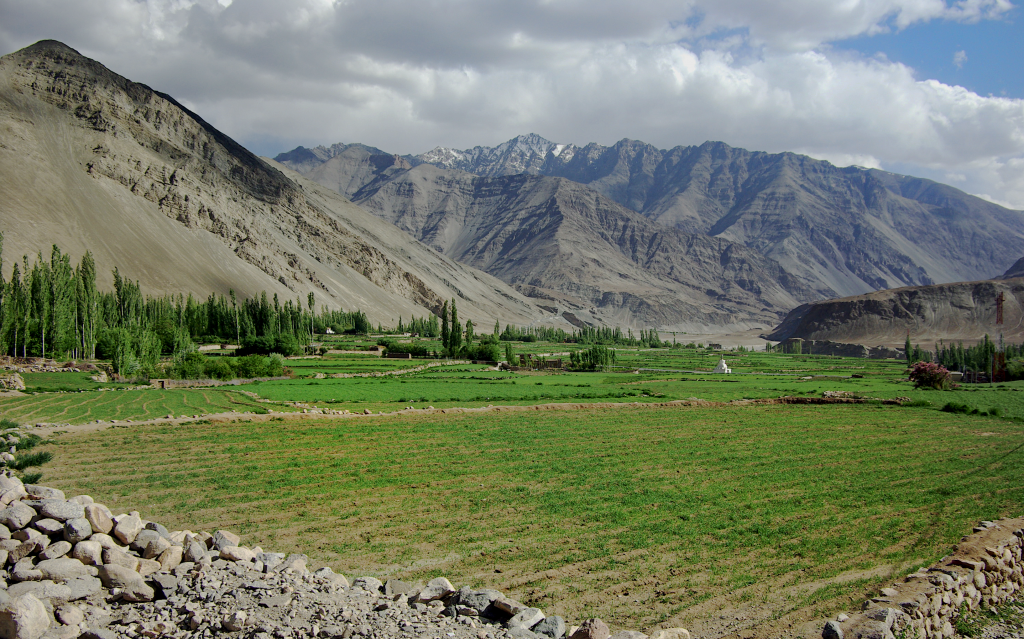 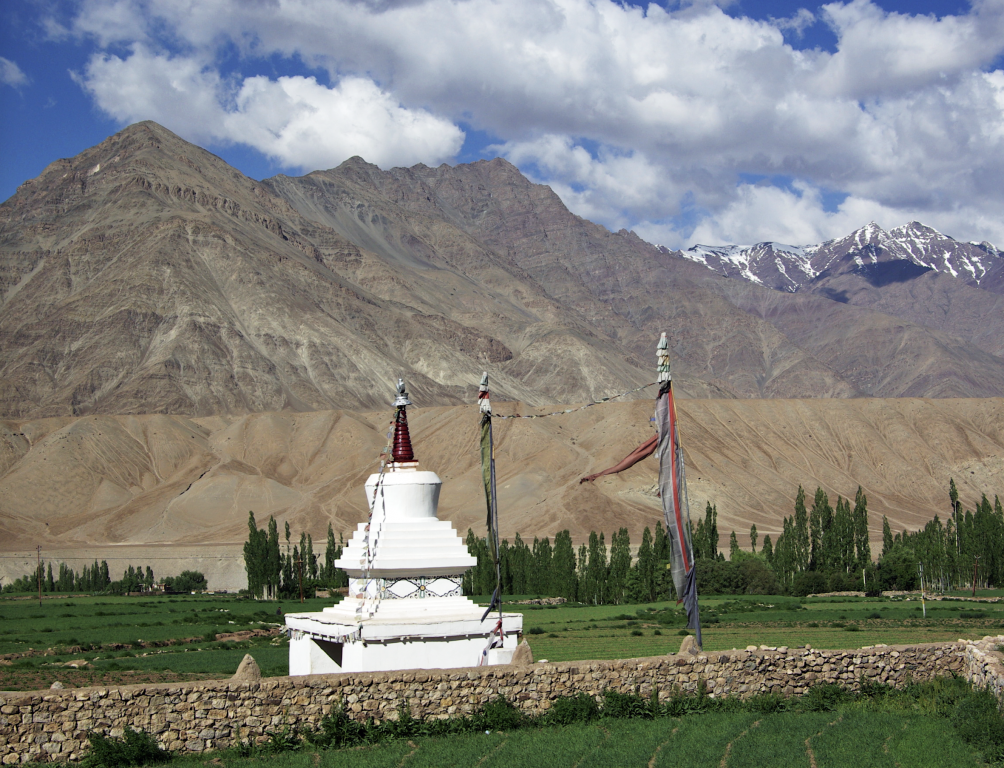 There is a small row of shops at the western end of the town. These sell dry goods and there is a German bakery, but why “German” we don’t know. There are several cafes and restaurants. All have an outside seating area and some provide a canopy. This is a good place to sit and watch the world. 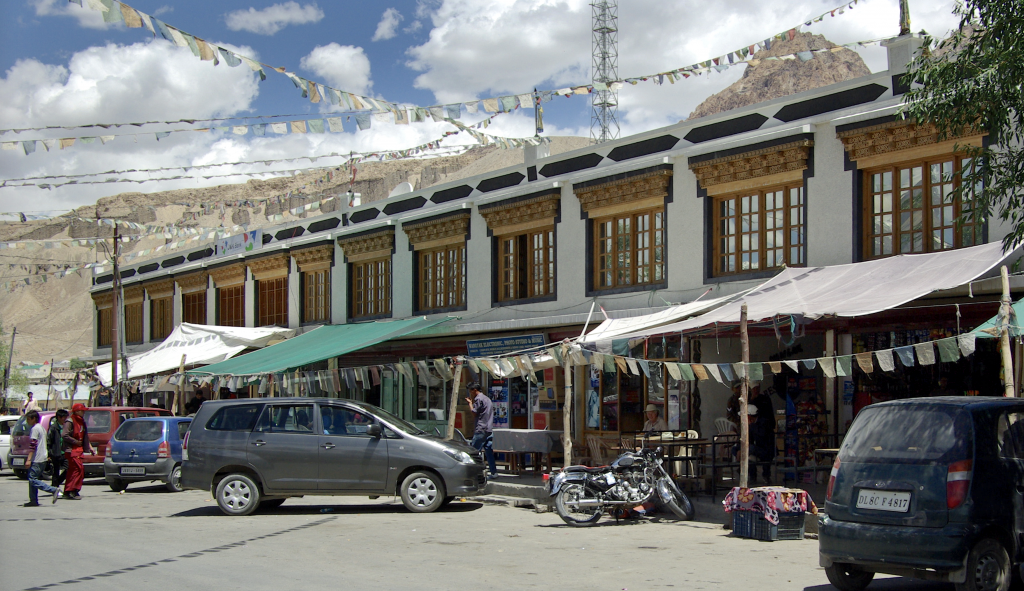 It is a disperse settlement of mud brick houses many with yards for animals, and narrow mud streets. 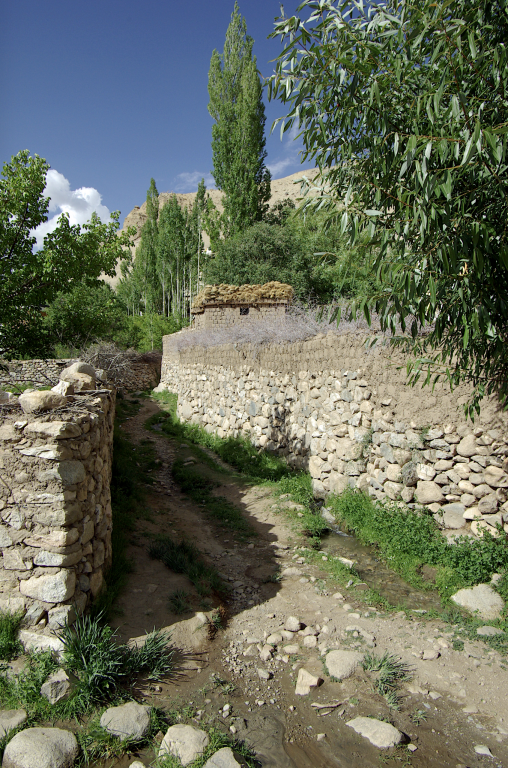 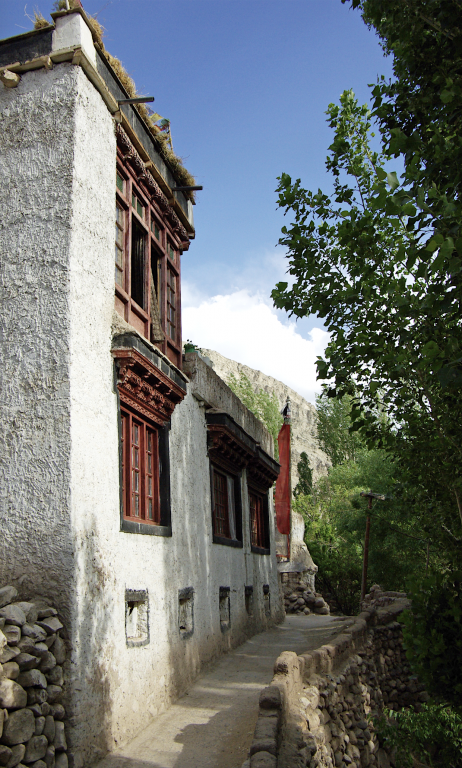 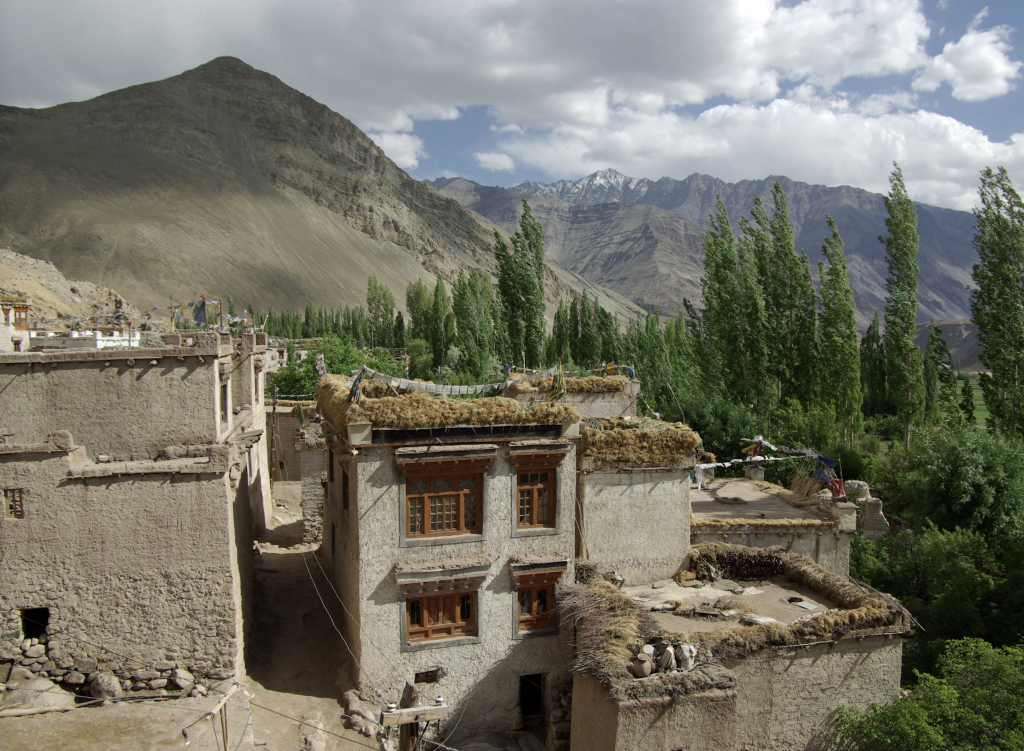 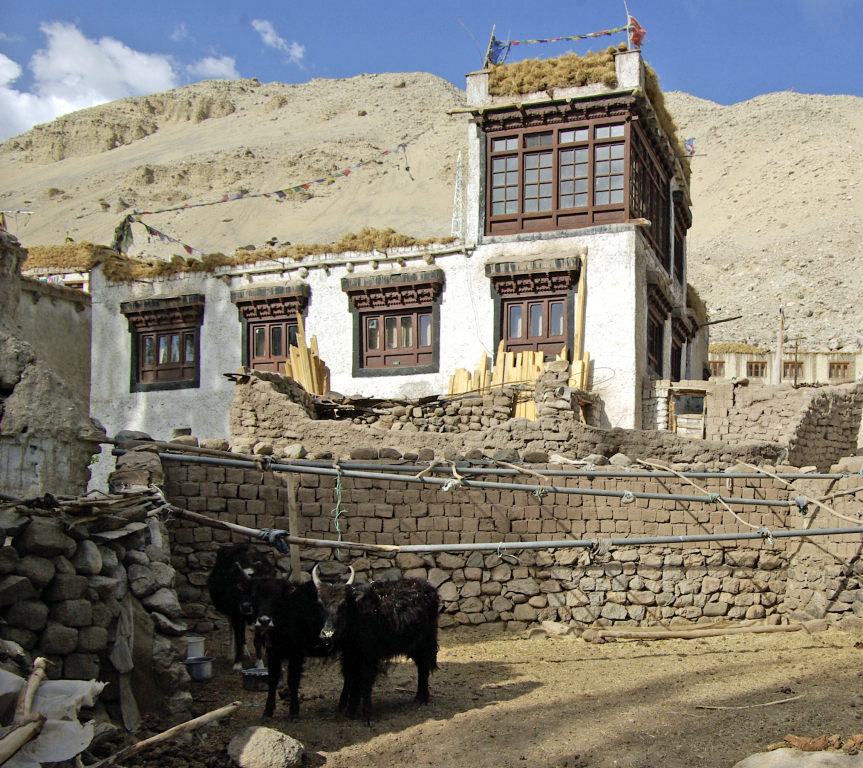 We stopped at Nimoo Village House which overlooks the village and is reached by a long drive round the top of the settlement, at the base of the dry rocky mountainside. 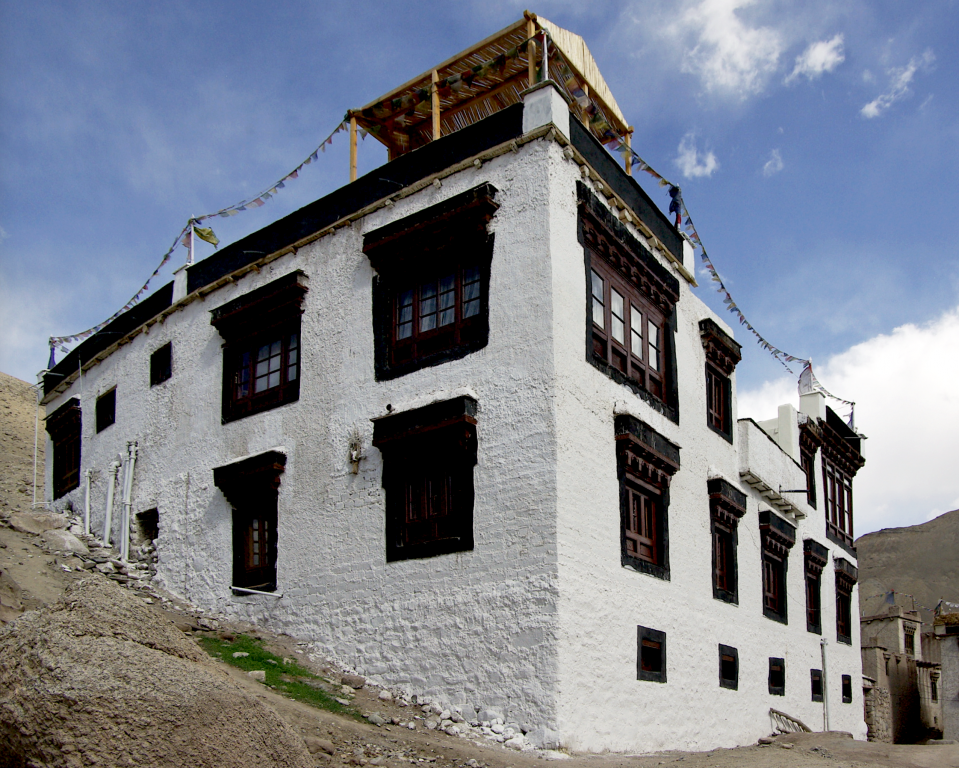 Entry is either by dropping down the side of the house and through a highly carved doorway onto the ground floor with kitchen or entry from road level through a doorway which lead to the courtyard on the first floor. Stairs off the passageway lead to the roof top with canopied lounging area.

The courtyard had tables and chairs and we had breakfast here. The rooms were built round three sides of it. There was a small lounge with floor cushions and books on Himalaya flowers and animals. Steps led up to the family shrine.

We had a big bedroom with large windows on two sides. One looked across rooftops of next house and down a narrow dusty alleyway lined with houses. The women used to sweep the alleyway every morning. The other looked down on the cow shed and yard with two cows and across the fields. 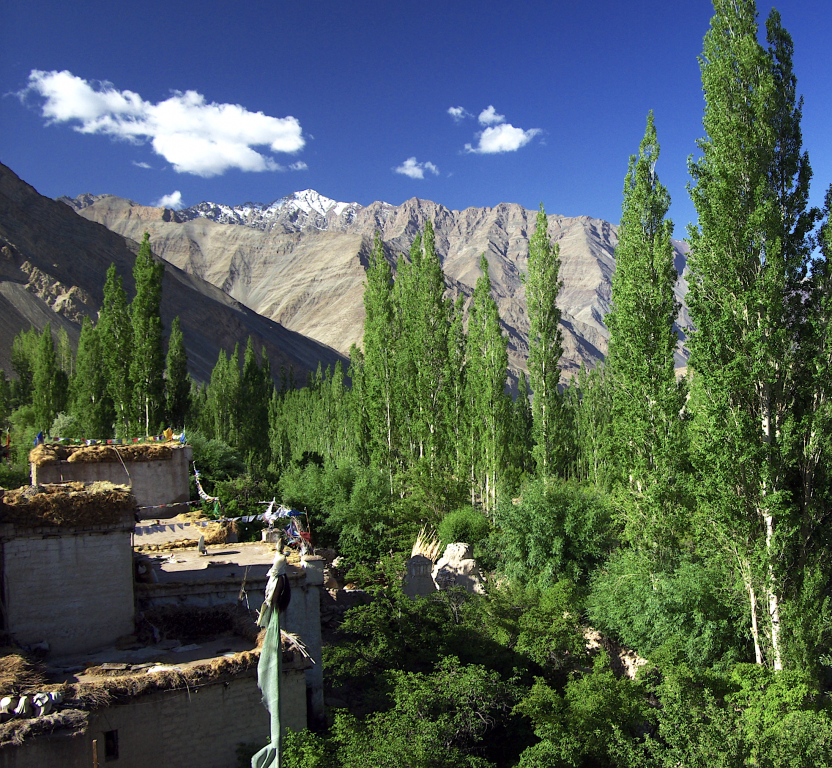 There was a large kitchen area with big stove used in winter for heating and cooking. The walls were lined with shelves containing cooking pots, bowls, spoons etc. There was a very small working area with two gas rings, fridge and a table where cutlery was kept.

We had a cookery session arranged with chef. We had hoped would give us an insight into Indian cooking techniques but he had decided to serve a Chinese style meal that evening. We watched him make soup and dimsum stuffed with cabbage, onion and carrot mix.

One of the great advantages of the Nimoo house is that you can walk from it. We went down the side of house and out past cow shed to pick up the irrigation channel with house walls on one side and walled orchards on other. his left the trees and ran out into fields. Many are quite large and look as if they are ploughed. Children were coming home from school across the fields. All were smartly dressed in well kept uniform. There were no mobile phones and none were eating.

Very few houses have a water supply to the house. All water has to be collected from pumps or the irrigation channels. One of the first jobs for the children when get home is to collect water.

We spent a full day relaxing around Nimoo.

Our guides had arranged for us to visit the local school. Unfortunately the children were taking exams so we couldn’t see them at work. We had chance to meet the Head teacher, a very shrewd woman, and learn about the school. There are 29 children and they have specialist teachers for each of the different subjects. The teachers are allocated to the village by the government and move every two years. They learn Ladakhi, Hindu, Urdu, English, Maths, Science, History and Geography, but no art or music. The day is divided into 35 minute periods. At the end of the year they have an exam, which they have to pass before they can move up to the next class.

We were asked if we wanted to do some archery and said yes. This was on a rough patch of ground at the edge of the village. The target was printed on back of a cardboard box propped up against pile of earth. It was not as easy as expected. The bows are very stiff and it takes a lot of effort to pull the string back far enough to release the arrow. Otherwise it falls at your feet. Michael managed a lot better than I did - as long as he remembered to let go of the arrow… The guides then had a go among much laughter. They did much better than us and did managed to hit the target… occasionally.

We enjoyed walking through the fields and watching families at work. Most of the work is traditionally done by hand and involves all the family. It is a very fertile area with apple and apricot orchards. Irrigation channels bring melt water down from the mountains and these carry water via a network of sluices to all the fields. There is a lush growth of weeds along the channels and this is cut for fodder for the animals. There were also clumps of blue irises. Stanzin, one of our guides, came from Nimoo so we were taken to visit his family’s garden. This was surrounded by a tall stone wall. Entry was through a small metal doorway. Inside the ground was divided up into small plots each surrounded by a low earth wall. Planting is very dense and the plots are very productive. There were several apricot trees and the tools were carefully hung off the branches of the trees.

It was a delightful place and very quiet. We were taken to meet Stanzin’s grandparents who lived in a large house above the garden. Through the gateway was the yard and a pen for the cows. In a corner was a wood burning stove to cook outside in hot weather. We climbed the steps into the the kitchen which is also used as the main living area. There was a small stove providing heat and a cooking area with a gas burner. In another corner was a TV set and potted plants. Cushions round the walls were used for sitting.

Mains electricity arrived 15-17 years ago. Before that solar panels were used which were provided by the government.

We were warmly welcomed and offered black tea, dried apricots and traditional biscuits. These are a bit like rounds of pastry with lines cut across the top. They are baked in the open fire outside. They are placed in a metal container and covered with hot embers. They are plain, but very good.

We were also offered a drink of Chang, the homemade beer. This was served in a small bowl. A blob of butter was put on the edge of the cup for good luck. A large teaspoon of tsampa (roasted and ground barley) was sprinkled on the chang before drinking. It was light and refreshing although the tsampa gave it a roasted flavour. As guests we were given two helpings. We were assured it was not very alcoholic, but the afternoon seemed a bit hazy afterwards.

This was one of the highlights of our trip to Ladakh and a great way to finish the holiday.
Last edited by a moderator: Oct 2, 2020
http://wasleys.org.uk/eleanor/index.html
J

Hi Eleanor - thanks very much for the great report! I found it very interesting, especially the agricultural aspects.

For some reason, many of the photos don't load on my computer. I even kept the window open for half an hour, to no avail. I don't know if this is a problem with the limits of the site's software, or something on your end. This isn't the first time I've encountered this with your reports, and it's a pity, because the photos are half of the fun...
IAC, there were enough photos that did surface, so that I got great views of what you saw.

The problem was on our server. This thread has a lot of photos and was not able to show them all. It has been fixed. I changed a few posts to display photos a different way thinking that was the problem but it wasn’t. I’ll change them back.
Pauline Kenny - forums administrator
Slow Europe - Instagram
You must log in or register to reply here.
Share:
Email Share Link