Bavaria A Visit to the Bavarian Forest

The Bavarian Forest is an almost unknown area of Central Europe. Tucked away in the south east of Germany, it is part of the largest range of forested mountains in the region and the largest area of wilderness between the Atlantic and the Urals.

The autobahn from Frankfurt to Vienna passes along the Danube Valley, within view of these mountains, but few visitors turn off to explore the dense forest, tumbling streams and pretty villages. Indeed, for most of the second half of the twentieth century, the roads up into the mountains came to a "dead end" at the Iron Curtain - the border with Czechoslovakia, as it was called then.

Partly because of its remote location and the fact that the border prevented through traffic for decades, this area is also one of striking unspoiled beauty, much of it untouched by human development for many years. Bohemian Forest is the geographical name for the whole area, divided in postwar years between the Bavarian Forest and Bohemian Forest on each side of the border, each containing a National Park.

Even before the Iron Curtain, the area has seen more than its fair share of history, as it separated the Kingdom of Bavaria from the Habsburg Empire. Traces of this history remain to be visited today: paths along the medieval trading routes, glass production, ruined castles, beautiful churches and the summer festivals celebrating cross border raids by Hussites and Austrians.

Within 24 hours of arriving in the picture book pretty village of Bayerisch Eisenstein, we had crossed the border to take a look atthe Czech Republic. And that's how it goes with most visitors here: the fascination not only of a border which can be crossed on foot but also a border which was once the fault line separating Eastern and Western Europe, democracy and communism, the free market and the centrally planned economy, freedom and restrictions. 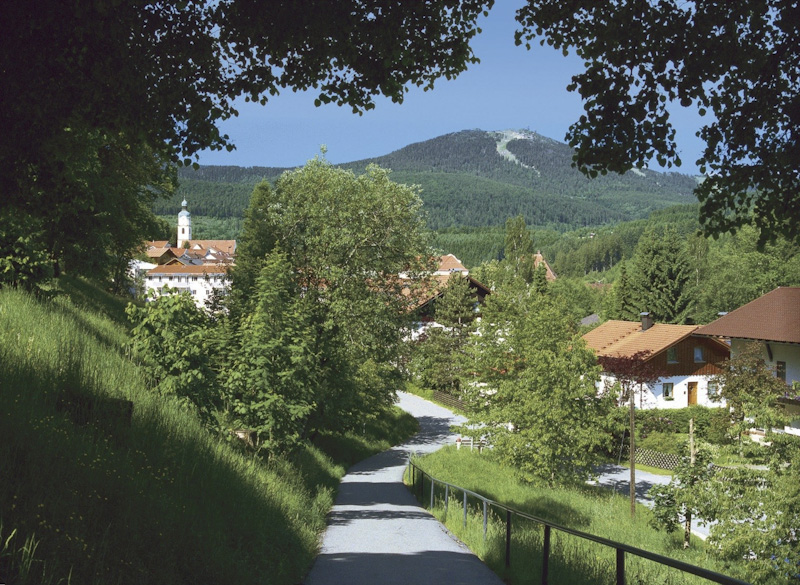 Getting to the Bavarian Forest

Road: The Bavarian Forest lies between the A3 Regensburg-Passau autobahn and the Czech border.

Air: The Bavarian Forest is most accessible from Munich airport but can also be reached by road and rail from Prague, Nuernberg, Linz and Salzburg airports.

Rail: There is a railway station in the village of Bayerisch Eisenstein, served by the Waldbahn on the German side. The Waldbahn takes visitors from the mainline station in the Danube Valley, winding up through the foothills and mountains of the Bavarian Forest, until reaching the border. On the Czech side train speeds are held back by the lack of development of the line during the Iron Curtain days and the trains meander down through the Bohemian Forest mountains to Klatovy and Plzen and eventually Prague.

The railway station and excellent bus services let visitors come by train from the airports and explore the area by public transport. Some British visitors even make the whole journey from London by train: breakfast in London, dinner in Bayerisch Eisenstein!

The Village of Bayerisch Eisenstein

Bayerisch Eisenstein is the ideal starting point for exploring Bohemia, the area between the border and Prague, as well as southeast Germany, and even across the border into Austria.

Apart from the wide range of day trips which can be made, the village itself is the perfect holiday location:
Two National Parks for the Price of One

The Bavarian and Bohemian Forests are on your door step if you stay in Bayerisch Eisenstein. Both are easily accessible and completely free of charge. The area is crisscrossed by long distance hiking trails including one from the Baltic Sea to the Adriatic!

But the forests are also ideal for less strenuous walking, including reaching the delightful woodcutters cottage at Schwellhaeusl for lunch with a gentle walk along the river. Even better, many of the pathways through the forest (all of them well signposted) are ideal for push chairs andwheelchairs, allowing everyone to enjoy the peace and beauty of the forest. There are also numerous mountain biking trails. You can take the train to a further point in the forest and walk or bike back. At Neuschoenau, more than 40 species of indigenous animals and birds can be seen in large natural enclosures, including brown bears and beavers, lynx and wolves.

The forests and rivers form the basis for a wide range ofoutdoor activities: archery and high wire parks, summer toboggan runs, canoeing and many more.

And there are winter sports: alpine skiing and snowboarding, cross country skiing, tobogganing and snow show walking. All-in-all, activities for every time of year.

Day Trips to the East

We love setting out across the border into the Czech Republic to meander along the country roads in any direction. Even without any particular destination in mind, we always enjoy the pretty villages, many of them substantially unchanged for more than 50 years, the babbling streams with occasional canoeists, the once grand towns and larger villages, a reminder of the riches brought by the small scale mining of gold and other minerals in centuries past, and the ruined castles. Small museums provide fascinating insights into the varied history of the area.

Klatovy is the nearest small town with an impressive square at its centre and an unexpected corner of lovely Art Nouveau buildings. Plzenis a major city but still untouched in its centre by Western retailing. The range of decorated buildings to admire is simply amazing and the huge square at its centre is the scene of a variety of seasonal markets.

Even Prague is within reach - how cool can it be to be able to go from your home to Prague for the day?

Heading north from the border brings us to the delightful town of Domazlice and further still to the famous 19th century spa towns, playgrounds of the European aristocracy.

To the south is the fascinating UNESCO World Heritage site, Cesky Krumlow. When we first came to the area it was hard to see the beauty underneath the scaffolding and builders rubble. Now it has been restored to its full glory, with the unique castle towering over the old town tucked in the multiple bends of the river. It's less renovated neighbour, Prachatice, once an important terminal for the transport of salt from Southern Bavaria to Bohemia, is altogether quieter and also well worth a visit.

Day Trips to the West

You can't head out of the forest and into the rest of Germany without encountering the Danube, once part of the Northern boundary of the Roman Empire and one of Europe's greatest waterways. This section of the Danube is very peaceful with a number of wildlife areas and sanctuaries. Cyclepaths meander along the banks and boat trips can be taken from Regensburg, Deggendorf and Passau, varying from a 40 minute tour of the town at Passau to a cruise to Budapest and beyond. Along the Danube are castles and monasteries galore.

There is the town of the three rivers, Passau, where the Ilz and the Inn flow into the Danube, which its castle, where (President) de Gaullewas imprisoned in the 1st world war and glass museum with the largest collection of Bohemian glass in the world. And the preserved medieval UNESCO World Heritage site of Regensburg with its ancient stone bridge, narrow alleyways and Roman ruins.

Salzburg and Munich can also be visited for the day.

Just about every weekend during the summer there is somekind of event to visit. Every town and village has at least one festival during the summer, some of them last for a week, celebrating beer and music, local sports and customs. Then there are the medieval re-enactment festivals - celebrating the salt trade or past battles or ransacking of castles. In winter there are horse and sledge races and après ski.

Where to Eat and Drink

We have some excellent places to eat in the area: Poeschl-Stuben in Bayerisch Eisenstein and the Waldbahn-Hotel in the nearby town of Zwiesel are ones we can strongly recommend!

Beer is the "national" drink of Bavaria and there are plenty of small, local breweries in the area, including the "steambeer" made at the Dampfbrauerei in Zwiesel.

The traditional cuisine of the area is based on pork in various forms and several different varieties of dumpling. Fish from the lakes and rivers also feature prominently on local menus. These days, the better restaurants also have a selection of vegetarian dishes.

Bayerisch in German translates to "Bavarian" in English. The town Bayerisch Eisenstein means Bavarian Ironstone or Iron Ore (but no one uses the English translation of the village name).

Der Bayerischer Wald Arberland - Holidays in the heart of the Bavarian Forest, site in English.