Provence Arles and the Roman Amphitheater

The Arles Amphitheater (Les Arènes d'Arles) was built in 90 AD. It is 136 meters (446 ft) long and 109 meters (358 ft) wide and seats up to 30,000 people. Originally three tiers of arches, only two remain, each with 60 arches. It is still in use today for bullfights and other events. The city of Arles sits on the Provence side of the River Rhone. It was a large center during the Roman Empire and there are several Roman sites to visit.

The Arles Amphitheater is open for visits. It is located in the historic center of Arles, surrounded by medieval lanes. In the middle ages a small town was built inside the Amphitheater. This was removed in the 19th century to restore the Amphitheater to its former glory. 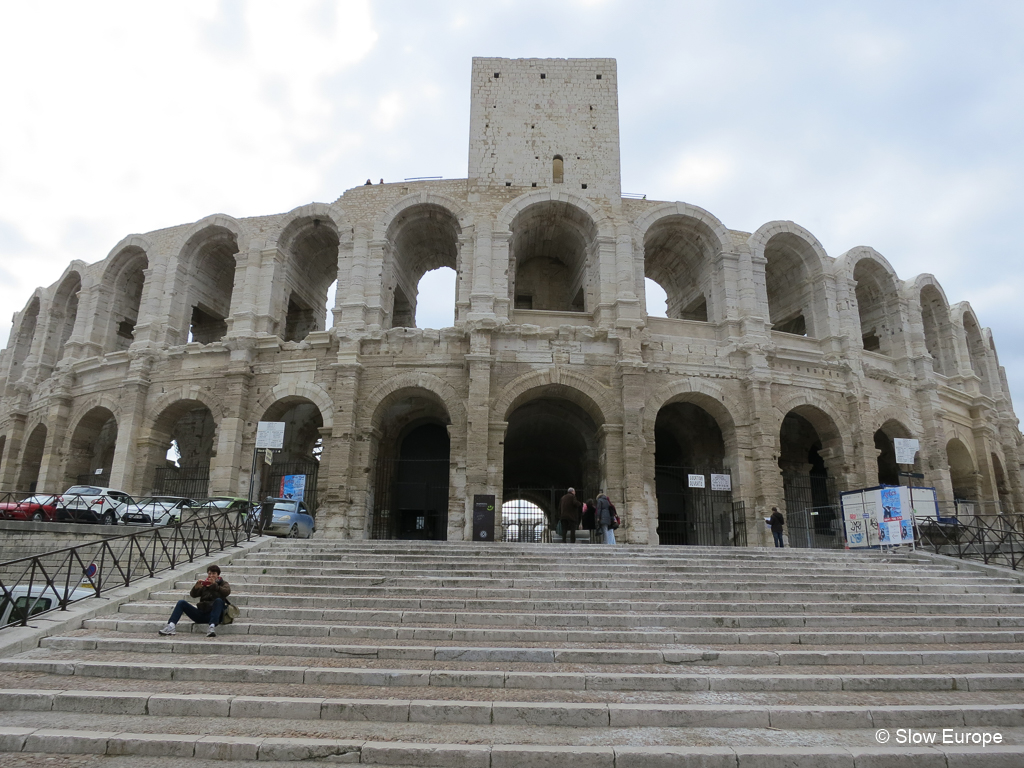 Other Roman Sites in Arles

Roman Theater (Théâtre Antique) - Across from the Amphitheater. The remains of a semi-circle theater facing a stage. Two full columns remain. You can tour the site, but you can also see enough of it from the street.

Place du Forum - This was the Roman Forum, but only two columns remain (in the outside wall of a hotel). The cafe made famous in a painting by Vincent Van Gogh is in this square.

Cryptoporticus (Cryptoportiques) - An underground area built in Roman times perhaps for storage. Enter in the Mairie (City Hall) in the Place de la Republique. Interesting but not essential to see.

Baths of Constantin (Thermes de Constantin) - Remains of Roman baths. These were once part of a large villa on the edge of the river. Not much to see now.

Alyscamps - Burial ground created by the Greeks and Romans. It was used by Christians from the 4th century onwards. At one time it was very large, but much was destroyed. A lovely long road, lined by (empty) stone tombs remains. People used to float their dead down the River Rhone for collection at Arles and burial here. Vincent Van Gogh painted this scene.

Arles Archeological Museum (Musée Départemental Arles Antique) - Modern building with a beautiful display of Roman statues, stone carvings, glasswork and mosaics. This is a very good museum. It is just outside the historic center.

Other Sites in Arles

Saint Trophime Church and Cloister - Detailed carvings of a "Last Judgement" scene on the front of this Romanesque cathedral from the 12th to 14th centuries. Separate entrance to the Cloister. 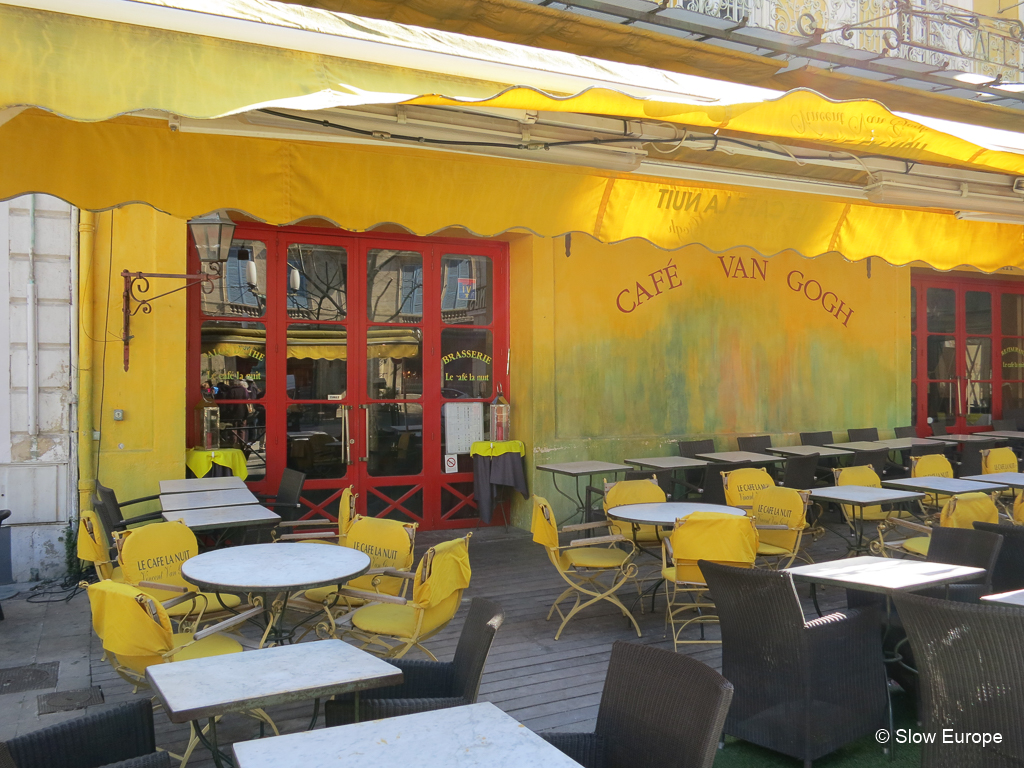 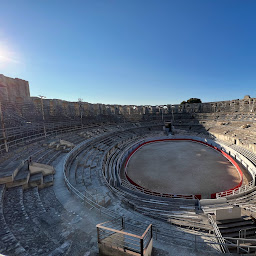 Photos from our visit in March 2013. We spent a few nights in Arles followed by a week in Nimes. 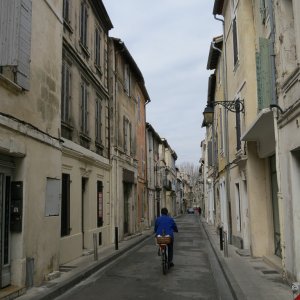 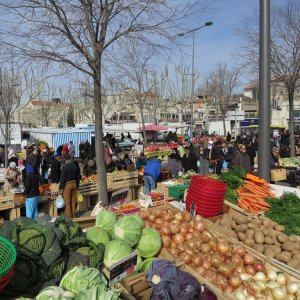 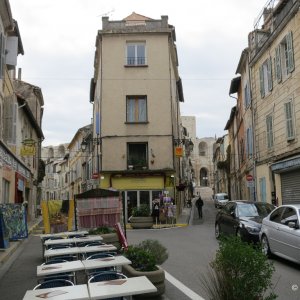 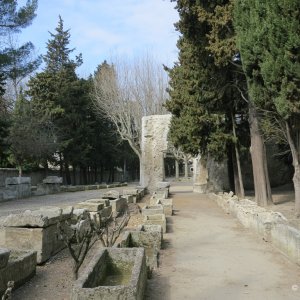 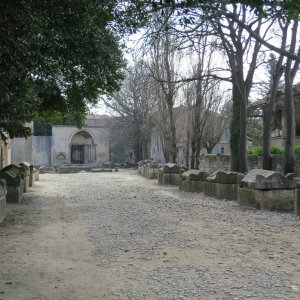 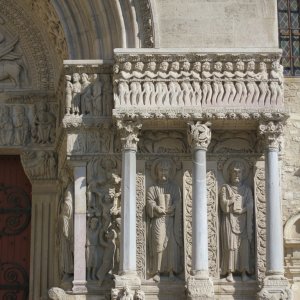 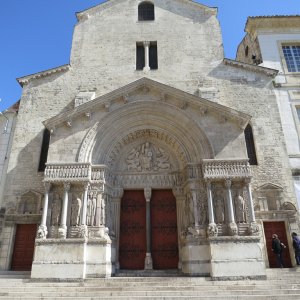 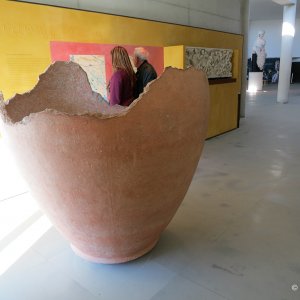 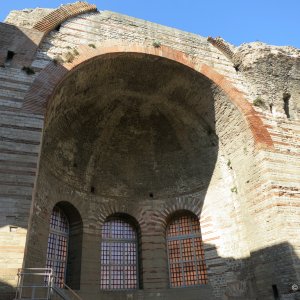 Provence, Arles and the Roman Amphitheater