Regions and Departments of France 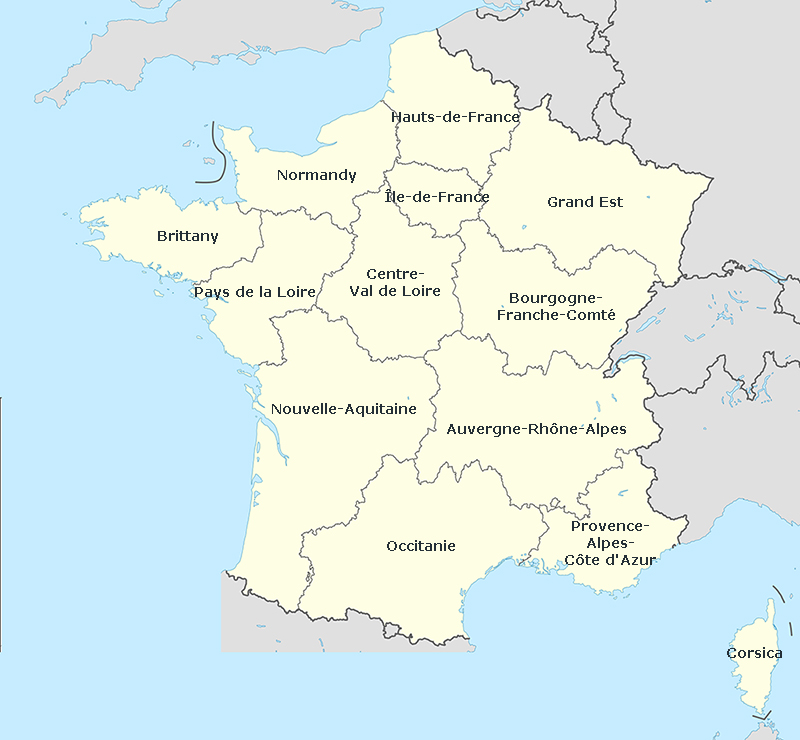 The thirteen regions of France. Base map from Chessrat at English Wikipedia, CC BY-SA 3.0, via Wikimedia Commons

The Thirteen Regions of France as of 2014

In 2014 France made an administrative change to the regions, reducing from 22 regions to 13 by combining some regions into super regions. This is very confusing for those of us who had memorized the previous regions (me!). Some regions are the same but several super regions were created combining two or more of the old regions. I have noted this below.

Starting in the north-western corner of France and going south, the new regions (French name after English version) and their relation to the pre-2014 regions:

Hauts-de-France: This new region combines two of the old regions - Nord-Pas-de-Calais and Picardy. This is the north-western corner of France and contains many of the WWI sites.

Normandy (Normandie): This region has not changed. The main tourist attractions are Mont Saint-Michel and the WWII sites on the coast.

Brittany (Bretagne): This region has not changed. Brittany is know for its beautiful coastline and the stone alignments at Carnac.

Île-de-France: This region has not changed. It includes Paris and the surrounding areas.

Centre-Val de Loire: This region has not changed. Here you will find the Loire Valley, vineyards and chateaux.

Pays de la Loire: This region has not changed. This is a popular coastal area.

Nouvelle-Aquitaine: The new region combines three of the old regions - Limousin, Poitou-Charentes, Aquitaine. Dordogne with its castles and prehistoric cave art is in this region.

Occtanie: This new region combines two of the old regions - Languedoc-Rousillon and Midi-Pyrénées. This region borders Spain and the Mediterranean. Carcassonne and Nimes are in Occtanie.

From the northeast corner of France:

Grand Est: This new region combines three of the old regions - Alsace, Lorraine and Champagne-Ardenne. Strasbourg, one of the EU centers, is in Grande Est on the German border.

Auvergne-Rhône-Alpes: The new region combines two of the old regions - Auvergne and Rhone-Alpes. Lyon and Mont Blanc are in this region.

Provence-Alpes-Côte d'Azur: This region has not changed. The Luberon in the heart of Provence is a popular tourist destination.

Corsica: This region has not changed. This island in the Mediterranean is famous for its beaches.

Wikipedia - Regions of France
Wikipedia - Departments of France - This page has a good map showing the 96 departments and the regions each belongs to.

Note: This article will be expanded to include more basic travel information for France. I wanted to post it now because this 2014 change in the France regions still has me confused.
Last edited: Apr 6, 2021
Click to expand...