The Pont du Gard, an ancient Roman bridge, is part of the Nîmes Roman Aqueduct that carried water from Uzès to Nîmes. The bridge, which crosses the River Gardon, is essentially three bridges built one on top of the other to reach the required height. The lower bridge has six arches, the next has 11 and the top has 36 small arches (originally there were more on the top). The channel of water ran on the top of the bridge. Edwin Mullins in "Roman Provence" says "The Pont du Gard has been widely recognized as the largest and the greatest of all Roman bridges". It is a UNESCO World Heritage Site.

Location: France - Occitanie - Gard - Vers-Pont-du-Gard
This is a popular tourist attraction and can get busy in the summer. The main visitor center and parking lot is on the east side of the river, but there is parking on the west side also. You can walk across the Pont du Gard.

We first saw the Pont du Gard from the air as our flight was coming into Marseilles airport. It was easy to spot even from that distance. We visited the Pont du Gard on two trips and I would happily visit again. This site is magnificent.

There are hiking trails that start at the Pont du Gard and go south along the river and up into the woods. There are also hiking trails to the north. Distances from Pont du Gard walking north: Uzes 18.3km, Collias 6.7km, Castillon du Gard 4.2km. For a short, interesting hike, walk north towards Vers-Pont-du-Gard to see the Pont de la Lone. 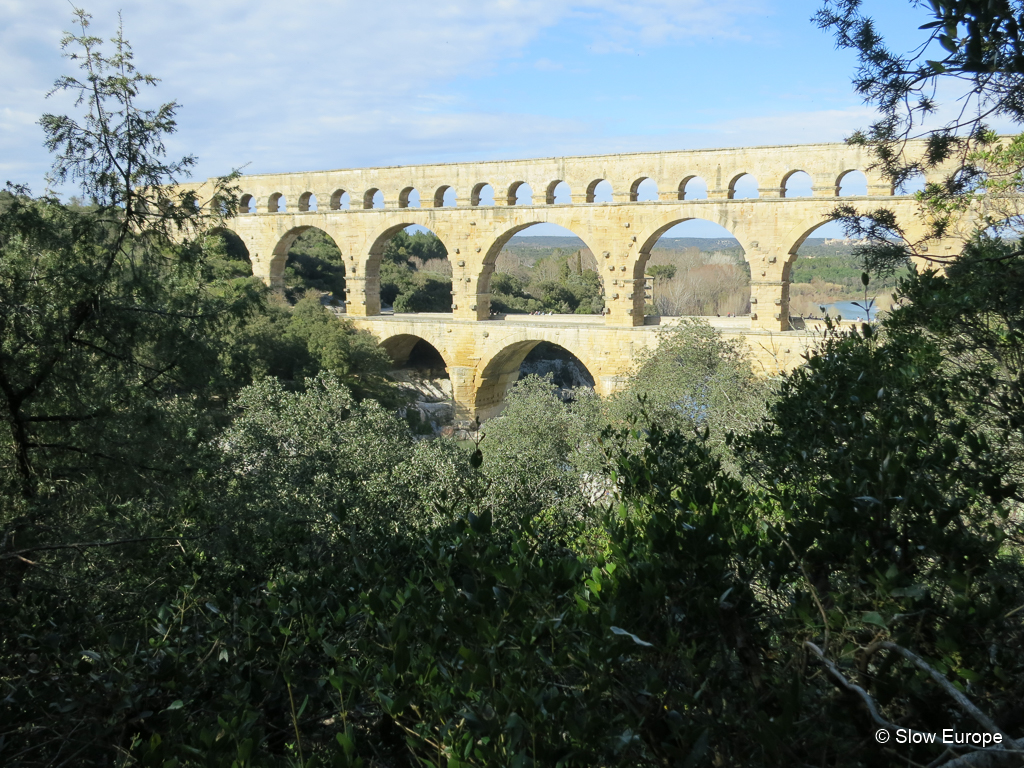 Finding the Remains of the Nimes Roman Aqueduct

The Nîmes Roman Aqueduct was 35 miles long (50km) with 17 bridges and three tunnels. 90% of the aqueduct ran underground. The elevation at the start in Uzes was 56 feet (17 meters) higher than at the end in Nimes, but that was enough to cause the water to flow.

There are several spots between Uzès and Nîmes where you can find remains of the aqueduct. This is a list of some of them from north, where the aqueduct starts in Uzes, to south, where it ends in Nimes. See the Photo Gallery for photos of these parts of the aqueduct.

Pont de Bornegre - Remains of a triple arched bridge and the tunnel that carried the water. Park at the hamlet of Bordnegre (different spelling from bridge - north off the D981 road to Uzes) and walk on a path towards Uzes. In a few minutes you come to a river and see the remains of the bridge and tunnels.

Pont de la Lone - Long stretch of arches that carried the aqueduct on top. Park on a rough lane off the D227 road to Vers-Pont-du-Gard (signed Chemin Font Menestiere), just past the main road to Uzes. Follow the trail markers to Fontaine de Misserand. The aqueduct remains are a bit further on.

Pont Roupt - A long bridge with 37 surviving arches that carried the aqueduct. It is 1km from the Pont du Gard. Follow the walking trail on the northern end of the bridge signed to Pont Roupt.

Pont du Gard - Long bridge. The best preserved and most interesting remaining part of the aqueduct. It is 160 feet high (48.8 meters) and 902 feet long (275 meters) on the upper level. South of the Pont du Gard are the remains of another small bridge for the aqueduct.

St Bonnet - The church in this town has stones taken from the aqueduct. The vaults in the church imitate the design of the Pont du Gard.

Sernhac - Remains of two tunnels that carried the water (each 60m long). Find them on a lane north of Sernhac, just before the A9 autoroute.

Castellum Aquae in Nimes - The end of the aqueduct, where the water was distributed to the city. 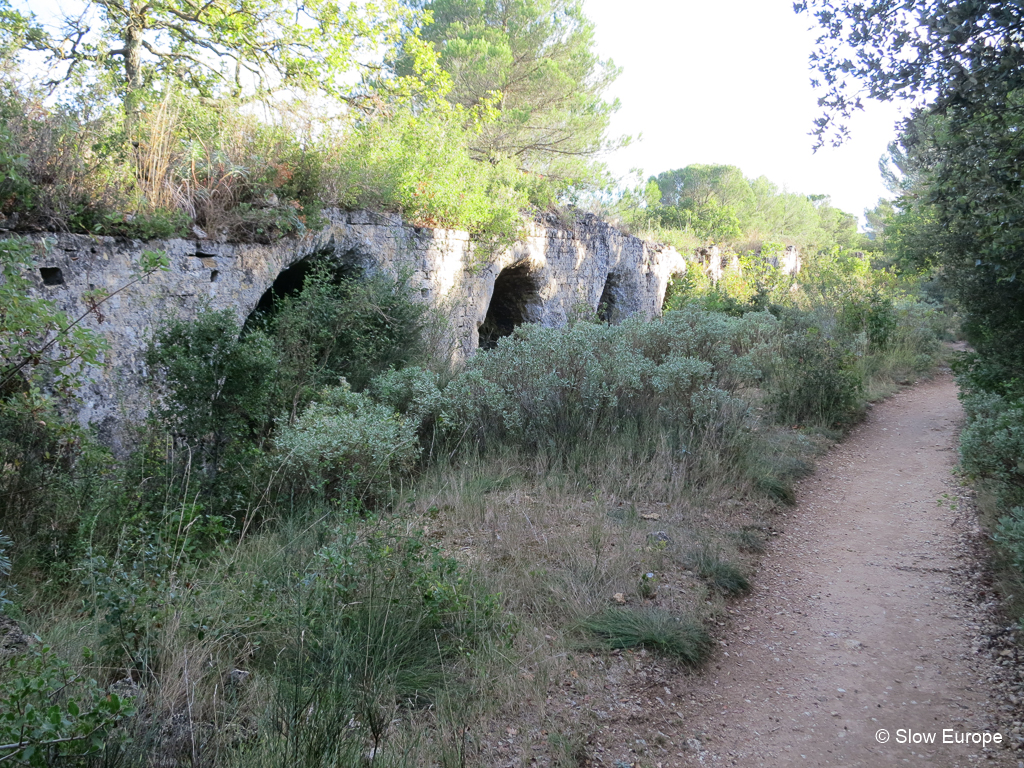 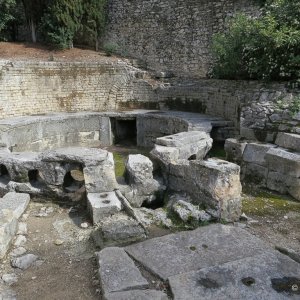 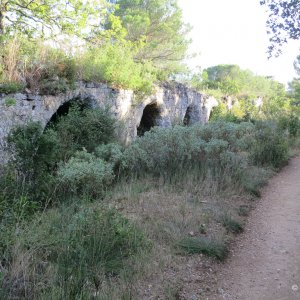 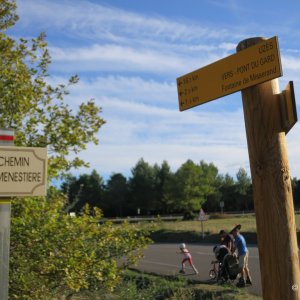 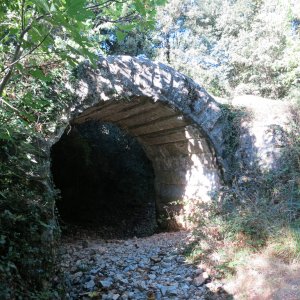 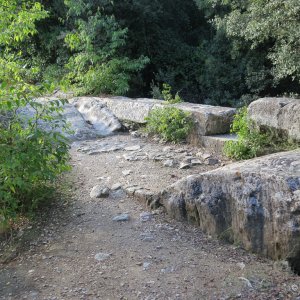 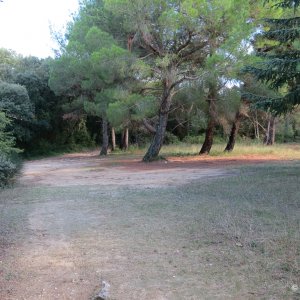 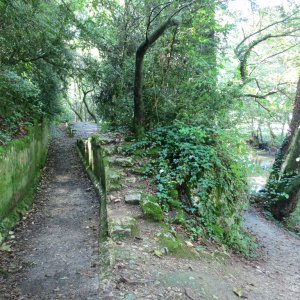 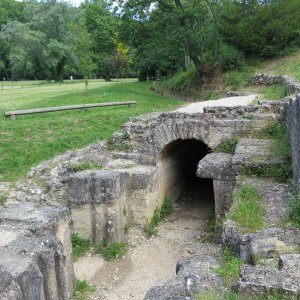 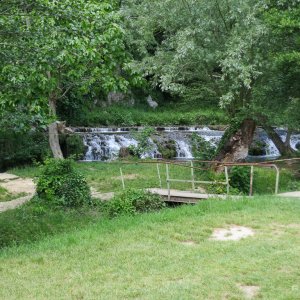 The Pont du Gard, an ancient Roman bridge, is part of the Nîmes Roman Aqueduct that carried...
Click to expand...