Cotswolds Roman Sites in the Cotswolds

Cirencester, the "capital of the Cotswolds", is a busy Cotswold market town with roots in Ancient Rome. When the Romans conquered Britain in 43 AD they built the town of Corinium, second only to Londinium (London) in size. Corinium became Cirencester and there are still Roman remains in the town and throughout the Cotswolds.

If your time is limited, Chedworth Roman Villa is the best site because it is large and well preserved.

Chedworth Roman Villa is the remains of a grand Roman Villa built in the the 4th century AD (one of the largest in England) with well preserved mosaic floors. The mosaics were recently restored and now have walkways above them. There are remains of several rooms of the villa including bathhouses, latrines and the underfloor heating system. The villa is in a beautiful setting in the Cotswold countryside near the village of Chedworth, north of Cirencester.

Chedworth Roman Villa can be busy in the summer and on Bank Holiday weekends. Combine this with a visit to Cirencester for the Corinium Museum to see what the Roman Empire was like in this area.

Location: England - Gloucestershire - Cheltenham
Located north of Chedworth. It is easiest to get to from the A429 near Fossebridge. Do not drive into the village of Chedworth.
Parking at the site is not well signed. As you enter the lane to the villa, look for a lane to your left that goes to a large parking lot.
Shop and cafe on site. Good pub nearby in Chedworth - the Seven Tuns.

Walking: This is a good area for walking. The Roman Villa sits above the River Coln. Footpaths take you along the river or into Chedworth Wood and across farm fields to the village of Chedworth. Chedworth Wood is a good place to see bluebells in the spring (May). The Corinium Museum, located in the center of Cirencester, displays many of the Roman artefacts found in the area, including some very good mosaics. You can also visit the remains of the Roman Amphitheater on the edge of town.

Cirencester is one of my favorite towns in the Cotswolds with many independently-owned shops, coffee shops and restaurants. Cirencester has a well preserved medieval center and a beautiful church with a perpendicular porch, fan vaults and interesting tombs. Parts of the church date from the 12th century. Cirencester Park has an elegant "broad ride", a tree-lined wide path leading to the countryside.

Location: England - Gloucestershire - Cirencester
Park in one of the many parking lots in Cirencester. Leave time to explore this beautiful and historic market town. 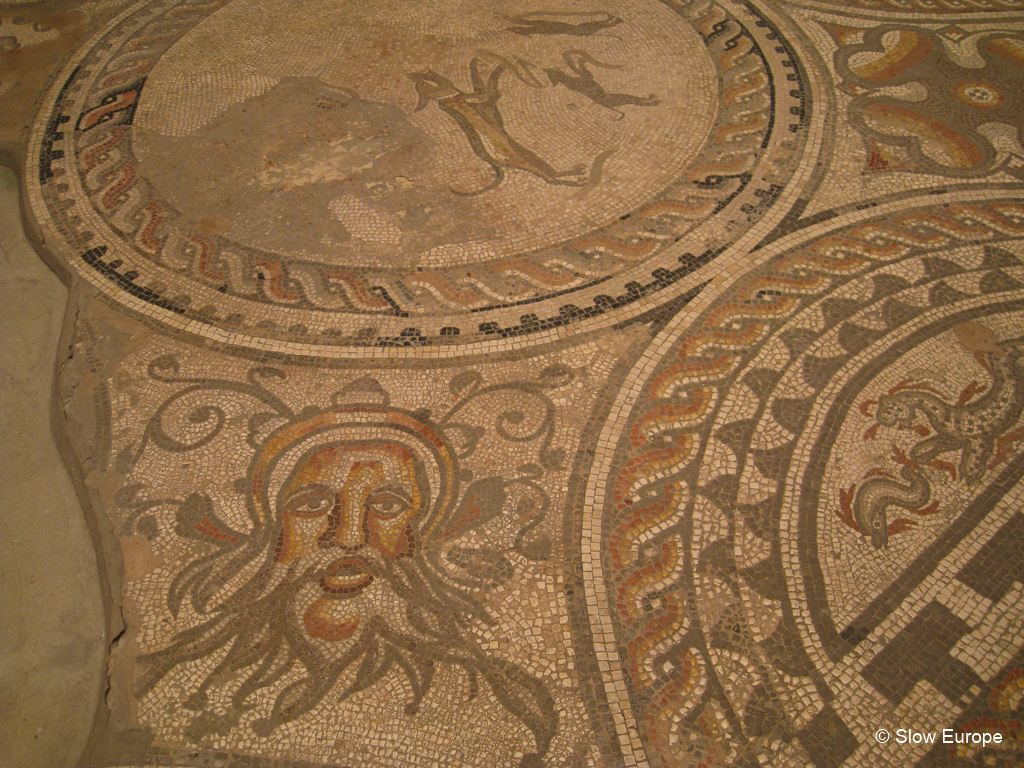 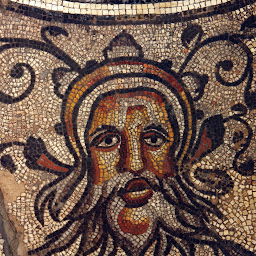 The Cirencester Amphitheater is one of the largest amphitheaters in Britain. It was built in the 2nd century on the outskirts of the Roman city of Corinium. The amphitheater sat 8,000 people. It was abandoned when Saxons captured the town in 577 AD. It has not been excavated fully - you can see in the photo that it is grassed over - but you can walk into it and get a good feel for what it once was.

Location: England - Gloucestershire - Cirencester
Located on the west side of Cirencester, next to the bypass highway. There is a sign from the highway. Coming from Stroud, it is just after the first roundabout, but on the other side of the divided highway, so you have to go to the second roundabout (with the Waitrose), and do a U-turn so you are coming back on the road and then turn left on Chesterton Lane. Follow that road about 1/2 mile and then take a left Cotswold Ave (easy to miss the sign for this turn). The amphitheater is on your left before the bridge over the highway. Park on the road.
Or access from town on Sheep Street. Once over the highway, turn right on Cotswold Ave. It is on your right.
It is always open. The Great Witcombe Roman Villa, once the center of a nobleman's country estate, was built in the 2nd century AD, radically modified in the 4th century, and abandoned in the 5th century. It is located in the Cotswolds, south of Cheltenham and not far from the Roman town of Gloucester.

​
Location: England - Gloucestershire - Brockworth (GL3 4TW)
The villa is just off the Cotswold Way, a long distance walking trail, between Birdlip and Cooper's Hill and makes a nice place to stop and have a picnic. It is a 30 - 45 minute walk from Cranham.
If driving, from the A46 south of Cheltenham, take Cirencester Rd east towards Witcombe (south of the A417), then you see a small "Roman Villa" sign pointing to the right. Follow the signs to a marked parking lot, then a short walk to the Roman Villa. 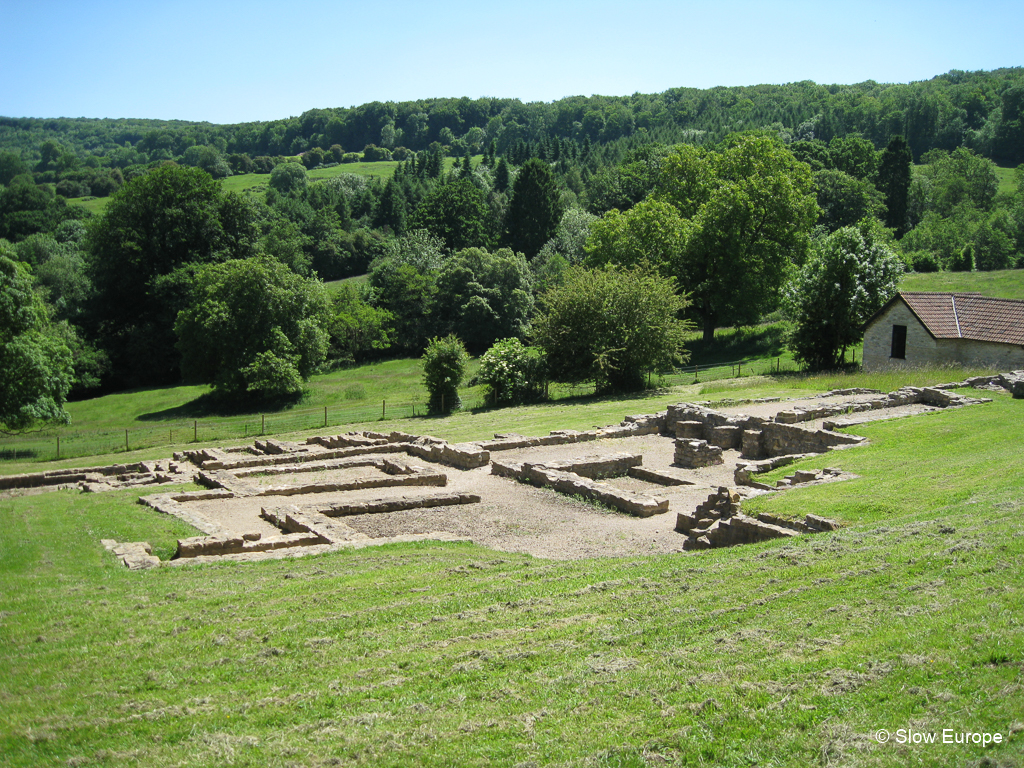 Both Fosse Way and Ermin Way are now modern roads, but parts of Akeman Street have not been developed.

Fosse Way: The Fosse Way linked Exeter on the south coast to Lincoln in the north east, passing through Bath, Cirencester and Leicester. Most of this Roman Road has been paved over and is in use as a modern road. In the Cotswolds the A429 follows what once was the Fosse Way (and is referred to locally as the the Fosse Way). The A429 goes through Moreton-in-Marsh, Stow-on-the-Wold, Northleach, Fossebridge (where the Chedworth Roman Villa is), to Cirencester where it crosses Akeman Street and Ermin Way. From Cirencester, the main road no longer follows the Fosse Way.

Ermin Way: Ermin Way linked Gloucester and Cirencester to Silchester. Much of the route of the road is now covered by the modern A417, A419 and B4000 roads.

Akeman Street: An important Roman Road that ran from Cirencester to Bicester and beyond, runs through the Leach Valley and is accessible in this area. Akeman Street did not become a road in modern times, as did many of the other Roman Roads, so you can still walk along it easily (some parts are minor roads or bridlepaths). You can hike from Eastleach to a spot where you walk along the remains of Akeman Street.

Map of Roman Roads in Britain Sasha Trubetskoy has created maps of Roman Roads in Britain and throughout Europe in a modern transit map style. These are beautiful makes that make the complicated Roman Road system easier to understand.

In the churchyard in Woodchester, a village in the southern Cotswolds, south of Stroud, is a section of Roman Mosaics from a villa that was here during Roman times. BUT you can't see them! They used to uncover them every ten years, but this practice has stopped. 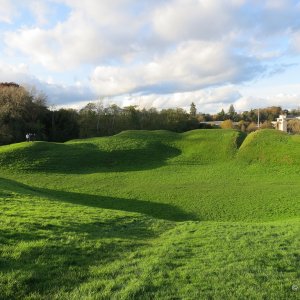 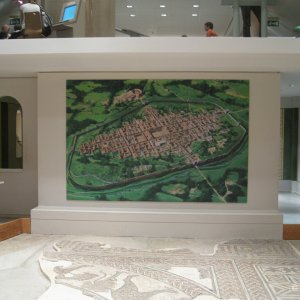 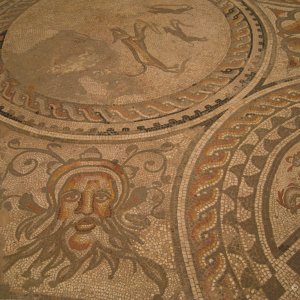 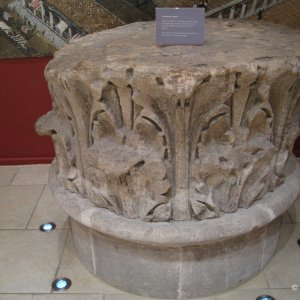 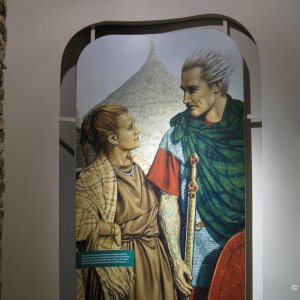 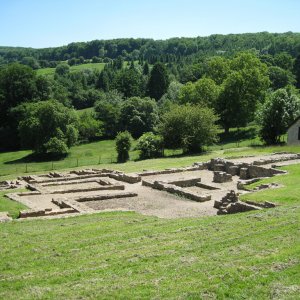 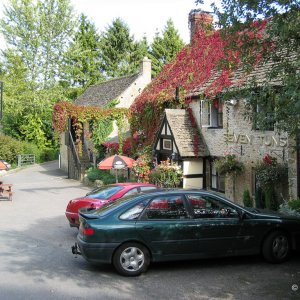 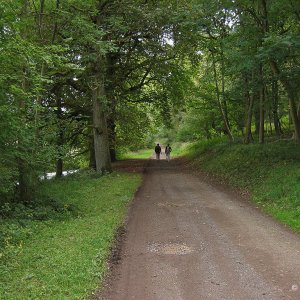 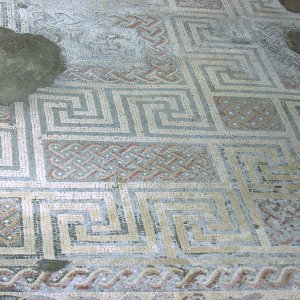 Cirencester in the Cotswolds was the second largest city in Roman times.
Click to expand...