Bath is a beautiful small city set in the River Avon valley south of the Cotswolds (population 88,000). First there were the Druids who settled here because of the natural hot springs. Next came the Romans whose bath complex remains at the center of town. The Bath Abbey was built during the Medieval period. Bath expanded in Georgian times when it became a spa town where people came to "take the waters", the same waters that drew the Romans there. The author Jane Austen was a resident during those times and "Persuasion" was set in Bath. Modern Bath is a thriving city and popular tourist destination. You can soak in the natural hot springs water at the Thermae Bath Spa, with pools filled with the same water the Romans and Georgians enjoyed.

Bath is an easy day trip from most Cotswold locations by car but there is enough to see and do to keep you busy for a week. You don't need a car in Bath, so could arrive by train from London.

This article is an overview of my favorite things in Bath. There is much more to see and do than I have listed here.

2000 years ago this was the town of Aquae Sulis (Latin for Waters of Sulis). The Romans used the natural hot springs water to create a large bath house. The remains are in the center of Bath, beside the Abbey, in the same building as the Pump Room. This is the main tourist attraction in Bath and can be crowded, but it is well worth seeing. The museum has displays showing what life was like when the Romans lived there. You walk down through the museum, through the remains of the Roman buildings, to the open-air baths. They are well preserved and beautifully presented. 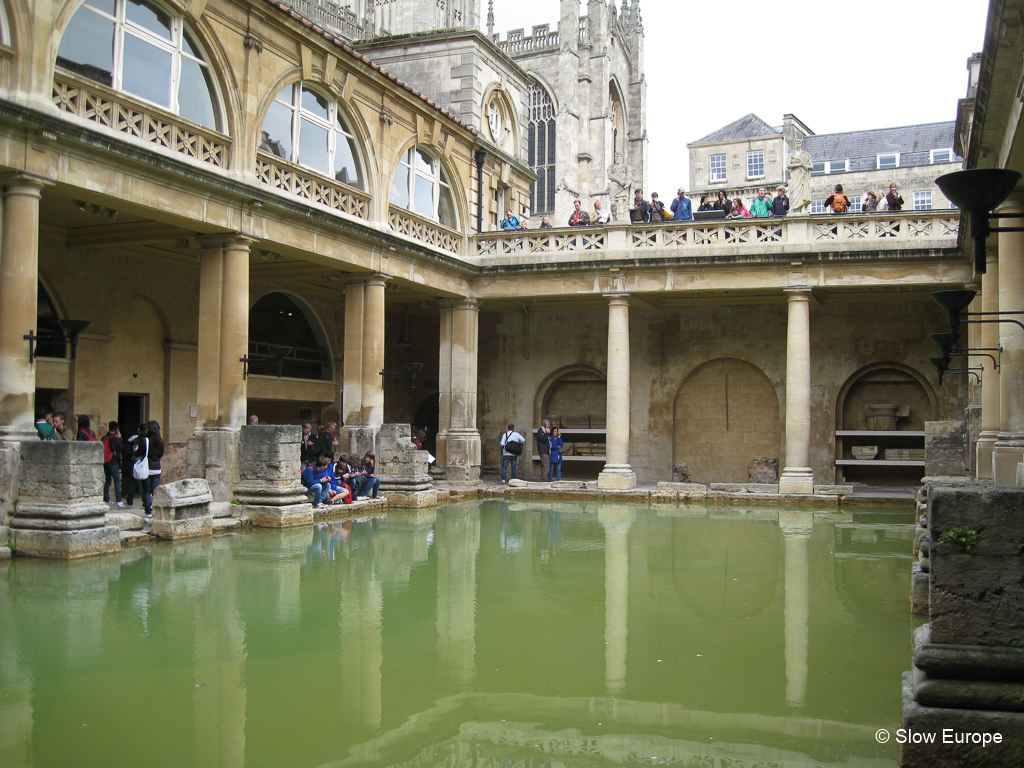 The stone floors and columns are as they were in Roman times.

Bath Abbey
The main historic church is located in the heart of Bath, near the Pump Room and the Roman Baths. The current building was started in 1499 and is the last of the great medieval churches of England. It is not designated as a "cathedral" because the nearby Wells Cathedral covers Bath and Wells.

Many of the streets and squares of Bath were laid out by John Wood, the Elder, and in the 18th century the city became fashionable and the population grew.

The Pump Room
The Pump Room has been a meeting place since 1796. When most Georgians "took the waters" they did not bath in them as the Romans did, but instead drank a glass of the water. You can still drink the Bath waters from a fountain at the back of the Pump Room (small charge) but the water does not taste nice. You can have morning breakfast or afternoon tea at the Pump Room.

Jane Austen
The Jane Austen Center: 40 Gay Street in Bath. This is not the house she lived in, but is similar, and is a nice museum with a good Austen-oriented gift shop. Jane Austen lived at 25 Gay Steet (now a dentist office), higher up the hill towards the Circus. She lived in a few other locations in Bath.

Queen's Square, The Circus and The Royal Crescent
The best sites in Bath are free and open 24 hours a day. I love this walk through the Georgian sites.

Start at Queen's Square at the foot of Gay Street. This was designed and built by John Wood the Elder in 1729 to 1739. Walk up Gay Street, past the Jane Austen Center, to the Circus, a circle of perfect Georgian houses. The Circus was designed by John Wood the Elder and built by his son in the mid 1700s. The acorns on the roofline of the Circus remind us of the Druids who settled Bath (Princes of the Hollow Oak).

Turn to the left in the circle, take the first left and walk another block to the Royal Crescent, a half circle of 30 Georgian houses. The Royal Crescent was designed by John Wood the Elder and built by his son from 1767 to 1775. The large lawn in front of the Royal Crescent is separated from the public gardens by a “Ha-Ha”, a deep ditch that keeps the "animals" from getting onto the lawns, but is not visible when viewed from the houses, so they see lawns turning into fields with no barrier.

From the Royal Crescent I like to walk onto a pathway that goes behind the houses on the Circus. These houses are even more interesting from the back. One of the gardens is open for visitors. 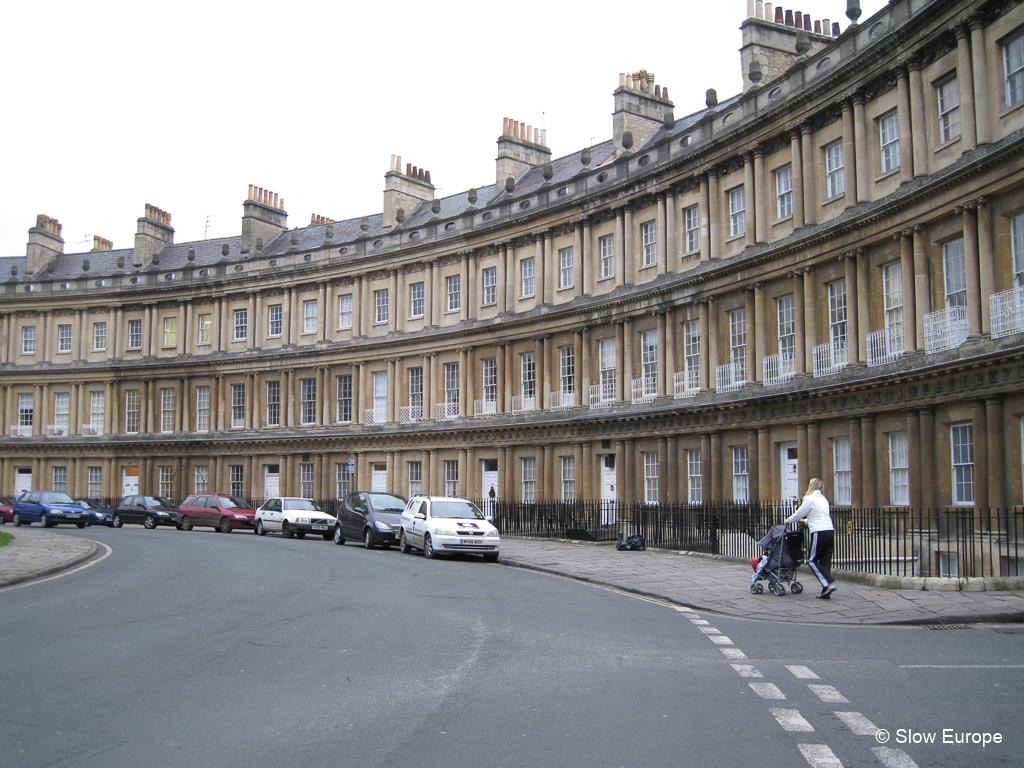 The Circus on a winter morning.

Number 1 Royal Crescent
Tour a Georgian house on the Royal Crescent and see what life was like in the 1700s. The house is beautifully preserved and there are people throughout the museum who will talk to you about the house and history. Closed in winter.

Prior Park
The building is not open to the public, but the 18th century gardens with a Palladian Bridge are a National Trust property. No parking on site; take a bus from Bath or walk. Catch the bus near the Train Station (10 minute bus ride to the Prior Park entrance) and it saves you walking up the hill. Once you get into Prior Park, you walk back down the same hill (inside the park) and then back up again to leave. Beautiful views of Bath and lovely gardens. You can get onto the Skyline Trail from the bottom of the park.

Thermae Bath Spa
This new spa using the natural hot springs in the center of Bath has been a long time coming, but it finally opened in 2007. The Spa is just behind the original Roman Baths. There is a large indoor pool on one level and a large outdoor pool on the rooftop. You can buy a ticket for two hours that gives you access to both pools plus wonderful steam rooms. (I thought the spa was nice, but the natural hot springs water was not hot enough! They cool it for Health and Safety reasons.) Thermae Bath Spa website

There are many more museums and theaters in Bath. It is fun to explore the shops in the small lanes around the Bath Abbey. Look for Abbey Green, a beautiful square near the Abbey and the North Parade Passage in the center of Bath.

The main tourist office is in the town center, behind the Abbey. This is a large office that does hotel booking and offers travel information. You must pay for the main Bath Guide and map. There are no public restrooms here, but they are nearby in the Roman Baths/Pump Room (enter the Pump Room and turn left in the hallway - restrooms are between the Roman Baths entrance and the Pump Room entrance). Bath is an historic Georgian town on the southern edge of the Cotswolds, England (United Kingdom). From www.sloweurope.com. 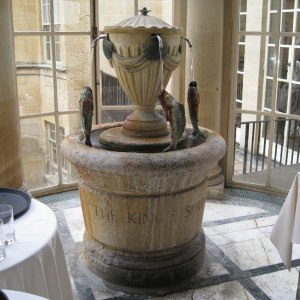 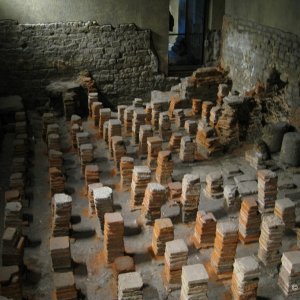 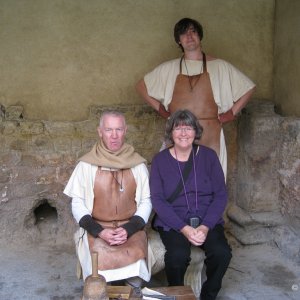 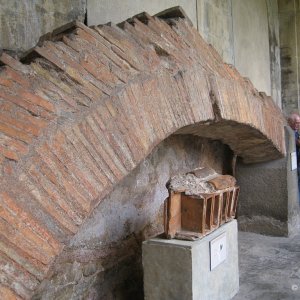 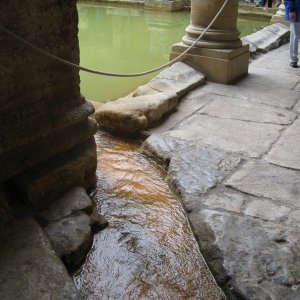 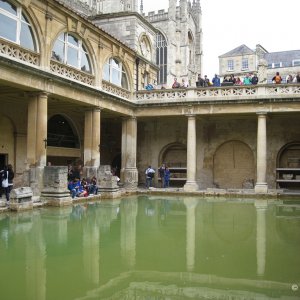 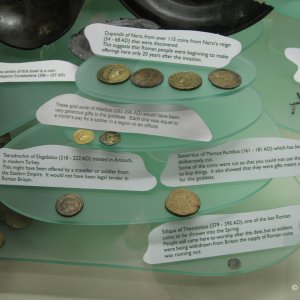 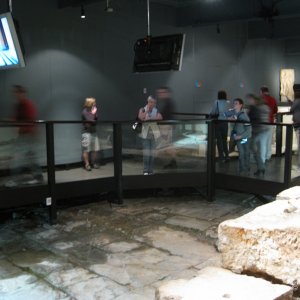 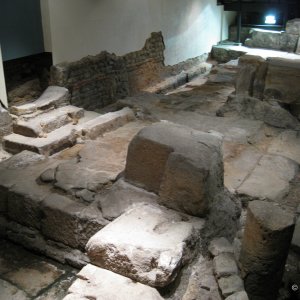 Remains of baths built by the Romans in the center of Bath.
Photos of Bath in the Winter 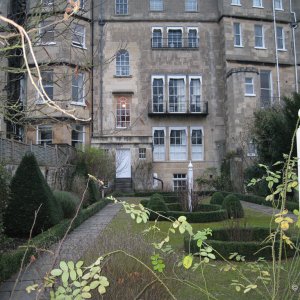 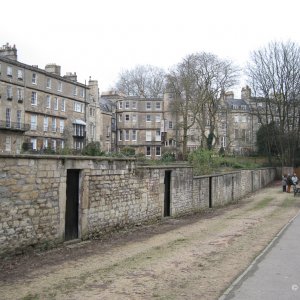 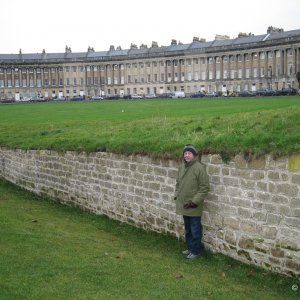 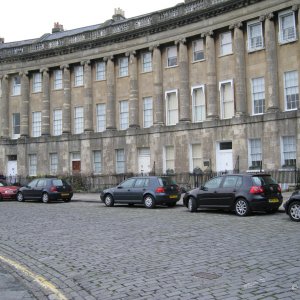 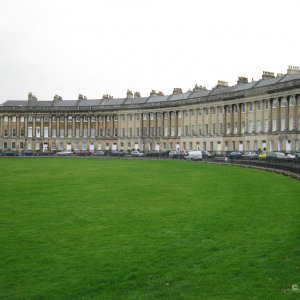 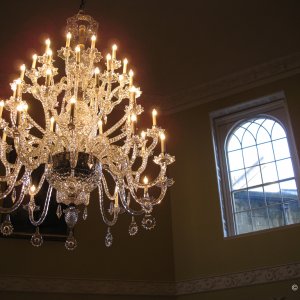 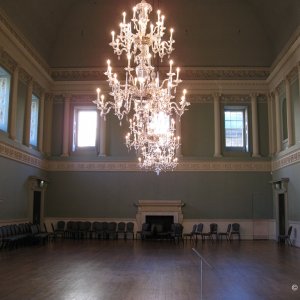 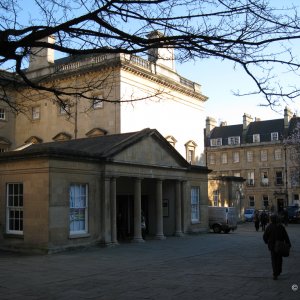 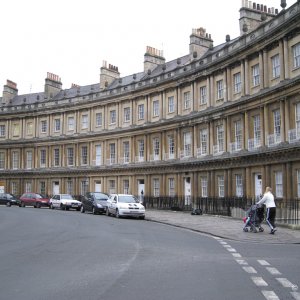 There is no direct bus or train service from the Cotswolds to Bath, so you must drive for your day trip. From Stroud, it is an easy 40 minute drive south on the A46 (the Bath Road). From Stow-on-the-Wold, it is a 1hr 15min drive.

Bath Park and Ride: The Lansdown Park and Ride lot on the northern edge of town, by the racetrack, offers parking with frequent buses into the center.

City Car Parks: There are many large parking lots in the center and they are well signed. We parked at the Avon Street Car Park (by the river at the end of the High Street) for £7.00 for six hours. It would have been more expensive for four adults to do the Park and Ride, but we got caught in rush hour traffic leaving the center (the bus would have avoided that, or if we knew our way better, we might have been able to avoid it).

See below for an easy way of parking in Bath if coming from the north.

Traffic is thick in Bath and parking is notoriously hard to find. The best way to deal with this is to either use a Park and Ride or, if you are driving to Bath from the Cotswolds, use the Charlotte Street Car Park.

The Charlotte Street Car Park is in central Bath, near the Royal Crescent and The Circus. Using these directions you can park there without driving on Bath's busy central streets. It is a very quick in and out for Bath. Note that you enter the car park from the western entrance off Marlborough Lane, not the main entrance.
Google Map