We have letter boxes in the US, but most of us put our outgoing mail in our mailbox, put up the red flag and the mail carrier takes it when delivering the day's mail. In England the Royal Mail delivers to your front door but does not take outgoing mail. Instead we walk to the nearest red letter box. These are scattered throughout towns, sometimes built into a garden wall or the wall of an old house.

It is called the "Royal" Mail because originally it was only used by Royals. King Charles I opened it up to non-Royals in 1635. The 1840 Postal Reform created a universal affordable postage rate and stamps making the Royal Mail accessible to everyone.

To mail a letter you went to the nearest collection centre or you could wait for the Bellman to walk down your street, swinging a bell to announce his arrival and collect your outgoing mail.

The writer Anthony Trollope, who worked for the Post Office, introduced the first letter boxes to England in 1855. He had seen them in France and Belgium during his travels. This saved you the long walk to a collection centre and instead you could deposit your mail in a letter box closer to home.

The first letter boxes were free standing Pillar Boxes. A few years later the Wall Box was introduced, boxes fitted into existing walls, and after that came the Lamp Box, boxes attached to lamp poles and other poles. They are always red.

Now I notice the cypher on letter boxes. The only one I have not found is from Edward VIII. He reigned for less than a year before giving up the throne and only a few letter boxes were manufactured with his Royal Cypher. 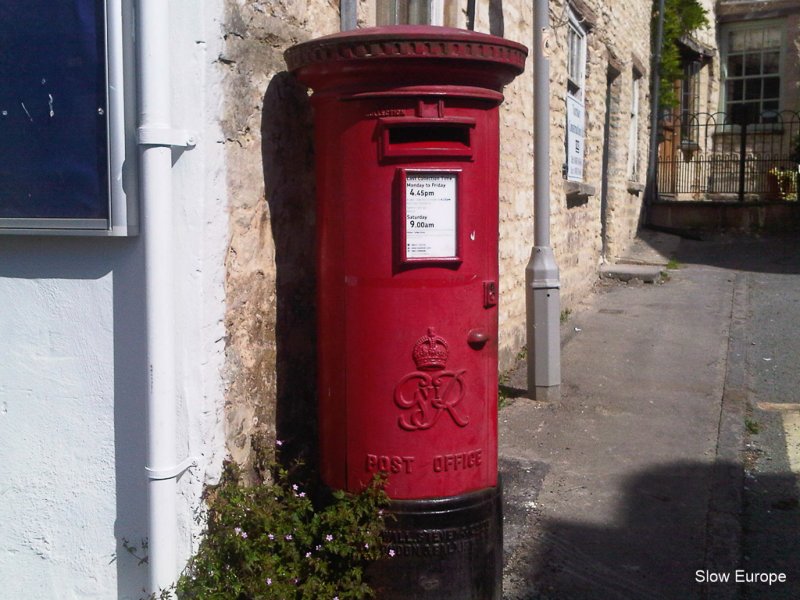 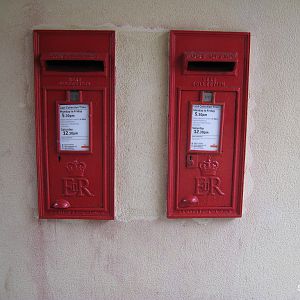 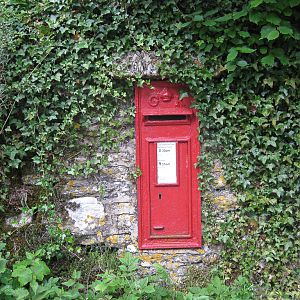 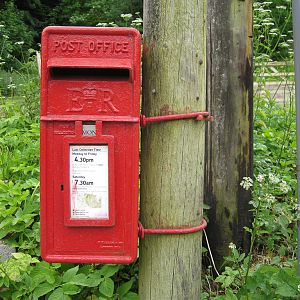 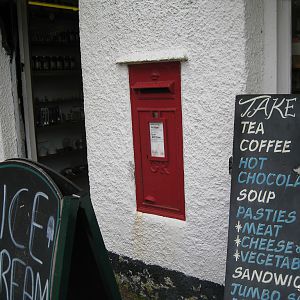 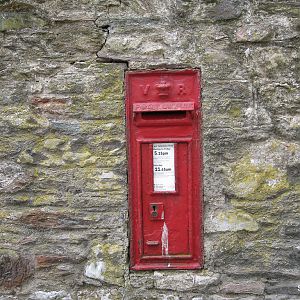 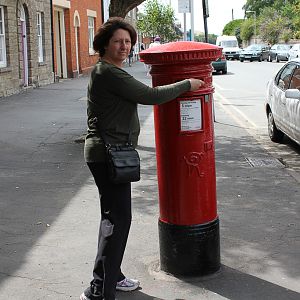 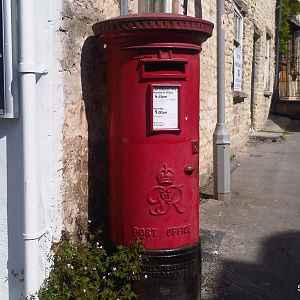 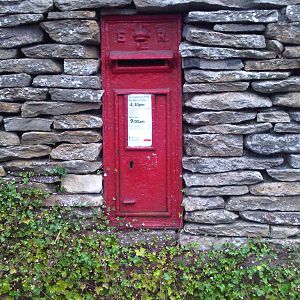 When we holidayed in the depths of rural Northumberland, the post man would collect letters when he delivered the mail and take them back to the sorting office. It could be a bit hit and miss depending how often he had letters to deliver...
http://wasleys.org.uk/eleanor/index.html

Contest 2019 Winner!
This is fascinating to me and Pauline thanks for the background on the mailboxes, but now I have to ask a question. (Remember this is coming from the other side of the Atlantic)

Does the same hold true for phone booths? When in Malta we saw this phone booth on Gozo. I was amazed there was still a phone booth, because they are few and far between in the states, but it had a crown on the booth. I remember wandering if that meant something. The crown is above the "P" 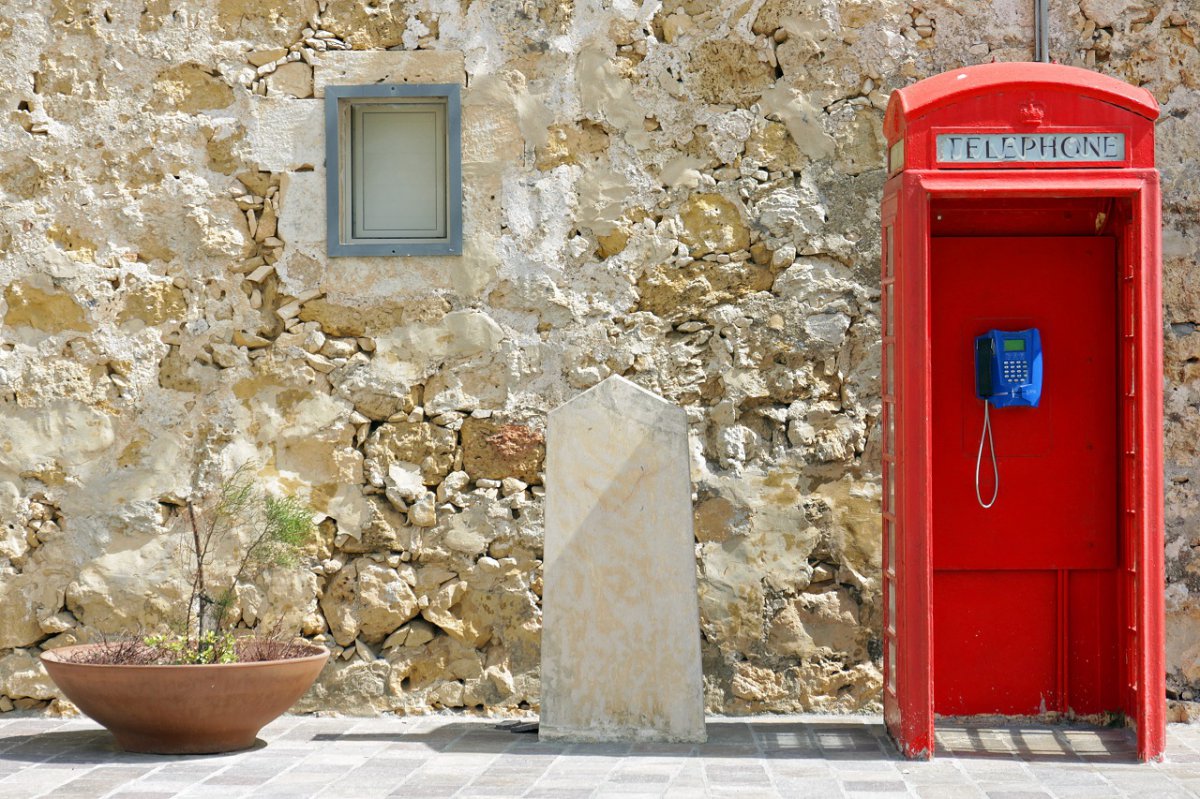 Last edited: Jun 26, 2017
"Though we travel the world over to find the beautiful, we must carry it with us or we find it not.” - Emerson

Traditionally all our phone booths used to be red with a crown on them. Apart from some which have been preserved in 'heritage sites', they have been replaced by characterless plastic boxes. With the increasing use of mobile phones, there aren't as many of these as there used to be. You can read about the story of the British phone box here.

Avoncroft Museum of Historic Buildings near Bromsgrove in the West Midlands is home of the National Telephone kiosk Collection. This has examples of nearly all the different telephone boxes that have been produced. One even had a small post box with dispensers for ha’penny and penny stamps on the back of the box.
http://wasleys.org.uk/eleanor/index.html

Contest 2019 Winner!
Thanks for the links on the phone booths.
I guess things are changing everywhere. I snapped this shot a few years ago in Portsmouth.
The old and the new!
Classic Phone Booth - The Lipstick Building "Though we travel the world over to find the beautiful, we must carry it with us or we find it not.” - Emerson

I took this picture of a mailbox in Provence...I loved the color! We are so used to red post boxes in Britain that it always suprises me to see yellow ones elsewhere.
http://wasleys.org.uk/eleanor/index.html

Eleanor said:
We are so used to red post boxes in Britain that it always suprises me to see yellow ones elsewhere.
Click to expand...

Yes, I agree about the red being more typical. I think that is why I found this yellow box so attractive. Contest 2019 Winner!
And the picture spawns another question...
What does the "GR" stand for?
If it was GBR - I would say Great Britain

Breaking News
Just went back reviewed the thread... King George Mailboxes have a GR - Correct?
"Though we travel the world over to find the beautiful, we must carry it with us or we find it not.” - Emerson

Correct. The mail boxes have the initials of the King or Queen., starting with VR. If you are lucky, you might even find a rare Edward VIII box.

To commemorate British and Irish gold medal winners at the 2012 Olympics and Paralympics, various post boxes in the home towns of the medal winners were repainted gold - the first occasion in modern times that the colour of post boxes in the United Kingdom had been changed from their traditional red. This was originally intended to be a temporary measure, but after positive public response it was decided to keep the boxes gold. You can find out where they all are here.

We used to have a morning and late afternoon collection from out post box. Now it is just morning.

Long gone are the days when we used to have two deliveries. If you posted a local letter in the morning, it was delivered on the afternoon post.
Last edited: Jun 27, 2017
http://wasleys.org.uk/eleanor/index.html

We lived in England for six months in 1988 and I remember those twice a day deliveries!

Looks like the closest gold box is on Portland. I'll check it out.
Pauline Kenny - forums administrator
Slow Europe - Instagram

The crown is on the old phone boxes because telephones were introduced as part of the public service offered by the Post Office, a situation which (apart, for some reason, Hull, where the local council installed the service and used white telephone boxes) survived until the 1980s.

In Ireland, the old pillar boxes were retained at independence, complete with the original royal ciphers, but painted green.
"Outside they found a lovely cariage lined with olive green cushons to match the footman and the horses had green bridles and bows on their manes and tails. They got gingerly in. Will he bring our luggage asked Ethel nervously.
I expect so said Mr Salteena lighting a very long cigar.
Do we tip him asked Ethel quietly.
Well no I dont think so not yet we had better just thank him perlitely." (Daisy Ashford, The Young Visiters)

In 1902, Hull Corporation (which later became Hull City Council) was granted a licence under the 1899 Telegraph Act to operate a municipal telephone system in the area. There were a number of other municipal telephone companies around the UK, but they were all ,with the exception Hull, gradually absorbed into the Post Office Telephone department, which later became British Telecom (BT).

The service was run by the local council and its charges were a fraction of those charged by BT. Kingston Communications (KCOM) still provides all the telephone services and broadband in the area. Hull still retains its white telephone boxes and has no BT landlines.
http://wasleys.org.uk/eleanor/index.html

A photo from today of that George V letter box near us showing it in summer. I just returned from Niagara on the Lake, Ontario which has a very strong British flavor. I saw this in a store and had to take a picture for this thread. I thought they were fairly lifelike.

Going back to the traditional red phone box, we found this (still working) example in La Roche-Maurice in September 2011... I was reading this thread again, while moving it to the new articles forum, and remembered that we saw an old British letter box in Jerusalem! It was in the Jewish Quarter of the Old City. It must be left over from the British Mandate days (1920-1948), before Israel became a country, when the British ran the area. It is very faded but it looks like it is in use. I did a search and found other images of British letter boxes in Jerusalem.