Writers and artists.
The author Jane Austen (1775 - 1817) wrote six perfect novels: Sense and Sensibility, Pride and Prejudice, Mansfield Park, Emma, Northanger Abbey, and Persuasion. They are not simply romance novels, although who will marry well is always the main plot, but are also witty commentaries on life at the end of the 18th century. Her observations on society are as valid today as they were when she wrote the novels. If you have not read any Jane Austen, do yourself a favor and start with Pride and Prejudice, my favorite. In the UK in 2017, Jane Austen was put on the £10 note, replacing Charles Darwin.

Jane Austen did not travel far in her short life (she died at age 41), so you can easily visit the main sites connected with her in the south of England. I am a Jane Austen fan so we hunted out these sites over several years of trips to the UK. I probably said a few too many times "I am walking where Jane Austen walked!" It is an amazing feeling to walk into the same church that she walked into over 200 years ago or to see the desk that she wrote at.

Jane Austen was born in Steventon, Hampshire in 1775 and lived there until she was 26. After her father retired as the village rector, the family moved to Bath. Her father died there and Jane, her sister Cassandra and her mother moved to Chawton where their brother gave them a house. Jane lived the last eight years of her life in Chawton 12 miles from Steventon where she was born. When Jane became ill, she moved to Winchester and died there in 1817. She is buried in Winchester Cathedral.

Steventon is a small Hampshire village, west of Basingstoke. Jane Austen was born there in 1775 and lived there until she was 26 (1775 - 1801). Her father was the village rector and the family moved to Bath when he retired. The house Jane Austen and her family lived in was destroyed soon after they left, so there are no remains, but the church where her father was the rector is still standing. Follow the signs for the church from the main street in the village. You can walk out into the nearby fields where their house was. 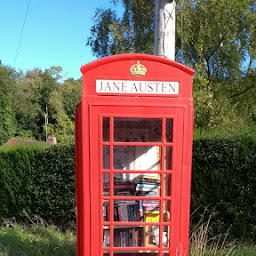 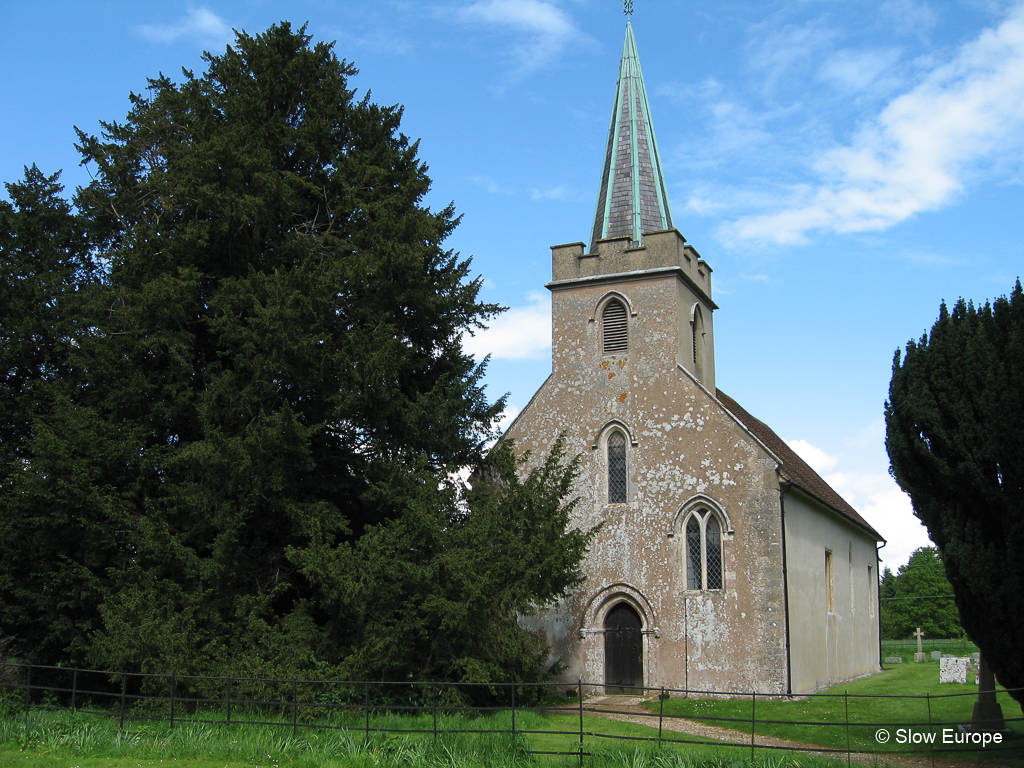 Jane Austen's father was the rector of this church in Steventon.

Jane Austen in the Cotswolds

Adlestrop in the Cotswolds might be the setting for Jane Austen's novel "Mansfield Park". Jane Austen used to visit her uncle who was the rector. You can visit the church and the see nearby rectory (Adlestrop House) where she stayed. 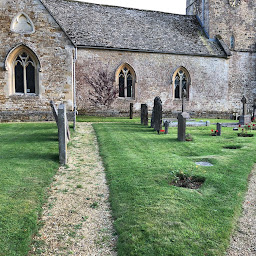 Lyme Regis in Dorset is the setting for part of Jane Austen's novel "Persuasion". In a pivotal scene a character falls from steps on The Cobb. These steps are the Grannys Teeth, about mid-way along The Cobb, and are still there (and still a bit dangerous). The Cobb was built in the 13th century and clad with Portland stone in the 19th century. In 1804 Jane Austen stayed at Hiscott's Boarding House which is now The Tree Cups Hotel at 18 Broad Street. Persuasion is Jane Austen's last completed novel. She began it soon after she had finished Emma and completed it in August 1816. Persuasion was published after her death. 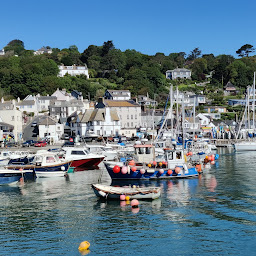 When her father retired as the rector in Steventon part of the family moved to Bath. Jane, her mother, father, and sister Cassandra lived at 4 Sydney Place for three years from 1801 - 1804. From there they moved to Green Park Buildings for one year. Her father died in 1805 leaving them in financial difficulties. They took rooms in 25 Gay Street and then at 7 Trim Street before leaving Bath in 1806.

The Jane Austen Center at 40 Gay Street is a museum showing her life in Bath. There is an excellent gift shop and the museum shows what a house in that era looked like. Jane did not live in this house but lived nearby at 25 Gay Street which is now a dentist office. Jane, her mother, father, and sister lived at 4 Sydney Place for 3 years.

In 1806 the family left Bath and moved to Southampton where they shared a house with Jane's brother Frank and his wife. They lived on Castle Square which backed onto the Town Walls. The house is no longer there. We have not been to this Jane Austen site but hope to see it someday soon. After their financially difficult years in Bath and Southampton, Jane's brother Edward gave them a 17th century house in the village where he lived in the manor house. Jane lived there with her mother, sister Cassandra and family friend Martha Lloyd. Chawton is only 12 miles from Steventon where Jane was born.

The house they lived in was given to the Jane Austen Society in 1949 and turned into a small museum. On display are her writing table, some of her jewellery, a quilt made by Jane with her mother and sister, and some of her letters and music books. She worked on all her books in this house; some were written earlier and edited there for publication (Pride and Prejudice, Sense and Sensibility and Northanger Abbey), some were written while she lived there (Mansfield Park, Emma, and Persuasion).

When she became ill, Jane Austen moved from Chawton to Winchester and died there in July 1817. She is buried in Winchester Cathedral.

Jane's mother (died 1827) and sister Cassandra (died 1845) are buried in the graveyard beside the Chawton Church, about a 10 minute walk from the Jane Austen House (you can see the gravestones). Behind the church is Chawton House, the large estate that her brother Edward owned. This house is now open to the public and holds a unique collection of early women’s writing circa 1600 – 1830.

Location: England - Berkshire & Hampshire - Chawton
There is a very nice gift shop in the house.
For the Jane Austen devotee, combine this with a visit to nearby Steventon where she was born and Winchester where she is buried. 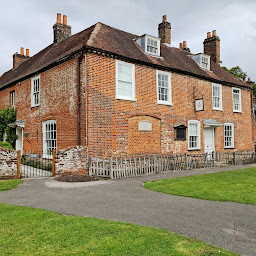 Jane Austen lived briefly at 8 College Street in Winchester before she died in 1817 (41 years of age). She is buried in Winchester Cathedral. Her gravestone is in the aisle of the cathedral, near a memorial to her that was set up in more recent times. 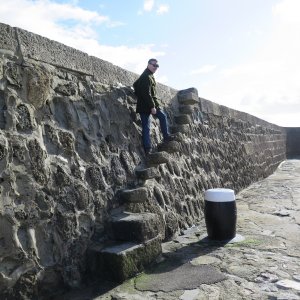 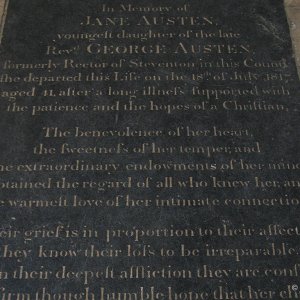 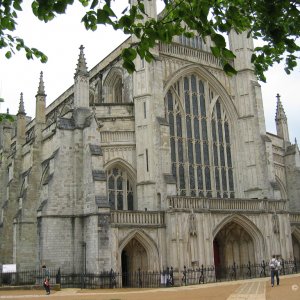 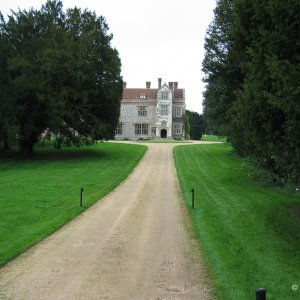 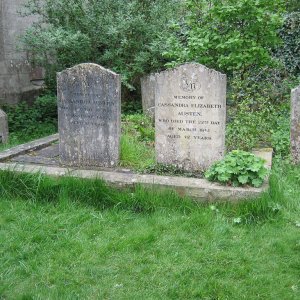 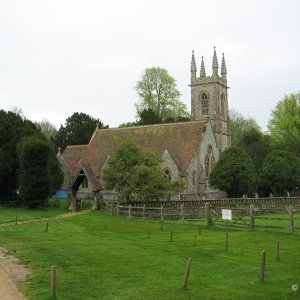 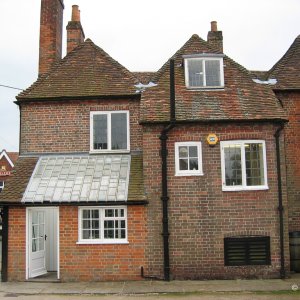 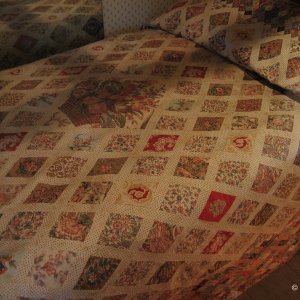 My wife Liz is a Jane Austin enthusiast and we visited many of the related sites in 2015: I added a timeline to the bottom of the article and corrected some typos.
Pauline Kenny - forums administrator
Slow Europe - Instagram
You must log in or register to reply here.
Share:
Email Share Link