Israel A Walk Through Jerusalem by Amos Oz

We are going to Jerusalem next week and I am reading the Amos Oz novel Tales of Love and Darkness. In Chapter 7 the family walks from Kerem Avraham, a poor neighborhood north of the city center, to Talpiot, an affluent neighborhood outside the city, south of the German Colony. The novel is set in 1940's Jerusalem. In the novel the family was walking (on the Sabbeth) to visit their famous literary uncle, Joseph Klausner. The book is partly autobiographical as Oz's uncle was Joseph Klausner.

Here is an article about Klausner and the street.
Times of Israel - On a small Jerusalem street, a historic literary rivalry
Nobel laureate S. Y. Agnon and historian Josef Klausner were once grouchy neighbors in Jerusalem's Talpiot. And they're not the only major figures with echoes in the leafy neighborhood

From the article: Relations between famous author S.Y. Agnon and his neighbor up the street, eminent historian Josef Klausner, were strained at best.

Indeed, in his autobiographical novel A Tale of Love and Darkness, Klausner’s nephew Amos Oz writes: “A polite but Arctic chill fell momentarily on the little road if the two of them ever happened to meet…They would raise their hats an inch or so, give a slight bow, and probably each wished the other from the depths of his heart to be consigned for all eternity to the deepest hell of oblivion.”

Thus after Klausner departed this world, and the street that they lived on was renamed in his honor, Agnon – not known for his modesty — complained to a neighbor: Can you believe me living on Klausner Street?!” To which the neighbor replied, “Would you rather Klausner was living on Agnon Street?”

The Walk
I took notes from the book and searched for places on Google Maps and came up with what I think is the walk. I will update these notes when we do the walk ourselves. In the novel he says the walk is 6 - 7 kilometers.
Google Map 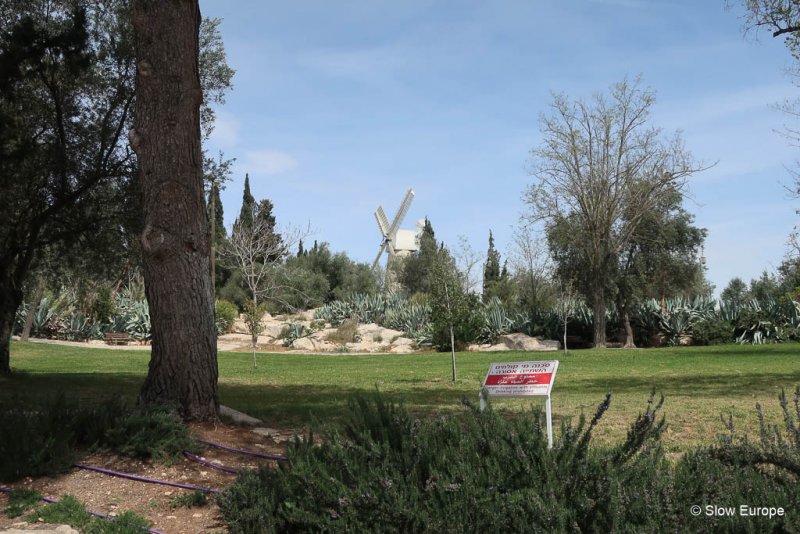 What a great way to appreciate a book, and kudos on the detective work.
I think I can help a bit with the places that were not clear to you :

1) Geula Street - this street changed its name at some point, and is now Malchei Yisrael Street ("Kings of Israel Street"). You indeed have crossed it on the path you marked out.

2) Talitha Kumi building - a beautiful building built in 1868, that served as an orphanage for Christian girls, and was destroyed in 1980, amidst much public and professional protest. There are only symbolic remains left, near the junction of King George and Ben Yehuda streets. You'll go past this remnant and notice it, as it is quite conspicuous, and has a busy bus stop beside it (the wall with the clock) :
https://goo.gl/maps/XDh7ztmqh7H2

3) Shiber's Pit - nowadays called Gan HaSus ("the Garden of the Horse", because of the statue there). Located between Ben Yehuda, King George, Be'eri, and Mordechai Aliyash streets :
https://goo.gl/maps/czoBrdWV1Vv

Thanks! I’ll update the notes when I get back. And lookout for those buildings.
Pauline Kenny - forums administrator
Slow Europe - Instagram