I was invited to join the family for two week holiday on the Isle of Man in August 2018. They were renting a self catering property in Port Erin at the southern tip of the island and there was a spare bed for me!

We had a very comfortable bungalow on Droghadfayle Road which was next to the level crossing. This was great for the two engine mad grandsons who disappeared to wave to the trains as soon as they heard the bells on the barriers. They were also allowed to take themselves to train spot on the station and most mornings were waiting for the “railway museum to open so they could go and play engine drivers on the loco in there.

Port Erin also has a lovely sandy beach – great for running off steam at the end of the day. It also has a large branch of Shoprite, the excellent local supermarket chain, as well as a small co-op. It also has a very good chippie and Chinese take away too. What more could you want?

As well as the steam railway to Douglas, it has an excellent bus service which starts early and ends late. Go Explore Cards give free transport on all buses, trains and trams. This worked really well as I could go off and explore by myself without depending on the family for lifts. I de3finitley got my money;'s worth!

We had a wonderful time and there is plenty to occupy all ages and interests. It is anorak Heaven with the steam railway, Manx Electric Railway and “Snaefell Mountain Railway, Groudle Glen Railway and horse trams along the Prom in Douglas.

The Isle of Man sitting in the middle of the Irish Sea isn’t very large - 30 miles by 10 miles but it punches way above its weight. It has the lot from rocky coastlines, sandy beaches, wooded glens, bare swept mountains and fertile farmland. 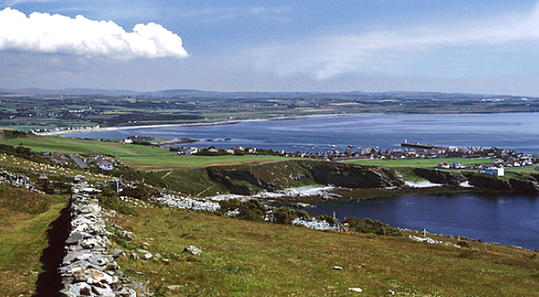 It feels very different to the UK as the Celtic and Norse influence are still strong. Place names are different

There are ruins of all sorts to explore, old churches with with carved crosses and the industrial heritage with Great Laxey mines as well as good museums for when the weather is bad.

It is a very laid back place. People are friendly and helpful. Drivers slow down to let you cross the road. You are not aware of graffiti or litter. Crime is low too. In many ways it is like stepping back into the gentler world of our youth. And that is before you add in the history and culture.

The island was settled from the Stone Age and there are the remains of their burtial cairns scattered across the island. It was a steep climb up to Meayll Circle, but was definitely worth it.

Christianity arrived early brought by Celtic missionaries in the C5th, building tiny keeils across the island and their remains can still be found often in isolated places across the island. Christian burials were marked by a carved stone crosses. The earliest were a simple carved cross but gradually these became more elaborate with beautifully carved wheel heads and shafts. The wheel cross in the churchyard of Old Lonan church is still standing where it was first erected 1500 years ago and best seen in the afternoon light. The Vikings arrived in the C9th, first as raiders but later settled and married the local Celts. Gaelic remained the language of the home but the Vikings introduced Norse place names and government. Tynwald is the oldest parliament in the world. Castle Rushen in Castletown is one of the best preserved Medieval castles in Europe. St Patrick’s Isle in Peel is the site of the original cathedral and was later fortified as a castle. There may not be much left of Rushen Abbey, but the gardens are a lovely place to drop out on a sunny day. I enjoyed joining a debate in the old House of Keys in Castletown and a guided tour of the Tynwald building in Douglas. There is also the industrial heritage too with the remains of lead mines all over the island. The biggest and most profitable was the Great Laxey Mine with its impressive waterwheel used to keep the mine free of water. The Lady Isabella Wheel is still the largest working waterwheel in the world. Fishing, especially for herring was also important and Moore’s Kippers in Peel is the only place still traditionally smoking herring over wood chippings. Just follow your nose to find them... Their kippers are taste completely different to the mass produced offerings on sale in the supermarket. When the Isle of Man Steam Packet began running regular steam ship services in the C19th, the island quickly became a major holiday resort for Victorian visitors who arrived in their hundred of thousands every year. Railways were built to open up the island to tourism and small fishing villages soon developed into major holiday resorts with splendid hotels built to accommodate them. Many are now subdivided into self carering apartments. 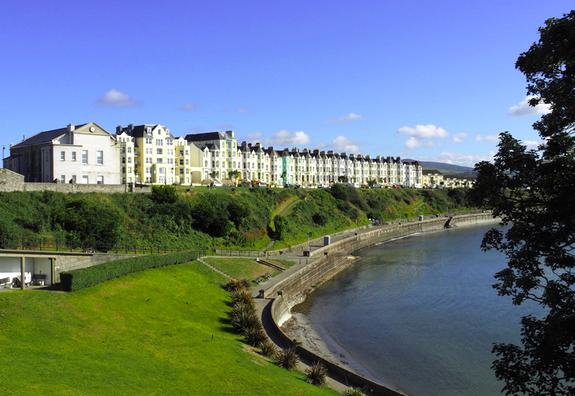 The Manx Government promoted 1993 as the ‘Year of Railways’ which attracted transport enthusiasts of all ages to the island. They still attract many visitors and are a popular way to explore the island. The Steam Railway between Douglas and Peel as well as the Manx Electric Railway from Douglas to Ramsey and the Snaefell Mountain Railway still run, using the original locos, power cars and carriages. I had many happy trips on them and they run through some of the best scenery on the island. Horse trams are a fun way to travel along the prom in Douglas. The Isle of Man is firmly back on the tourist map and visitor numbers have increased as people have discovered the island. Douglas, the capital, is still the major holiday resort, closely followed by Port Erin with its sandy beach and Peel, often referred to as the sunset city. As well as these, there is Ramsey which is largest town in the north of the island and Castletown in the south which was the original capital and was relatively untouched by Victorian tourists. All have their own particular character and all are worth visiting.

Milntown House and Gardens (#5) near Ramsey is the only stately home on the island open to visitors. The gardens are wonderful. Cregneah Folk Museum on an isolated plateau in the south of the island was the last place Manx language survived into the C20th. Over the years several properties have been acquired by the Manx National Trust and are now open as a museum depicting life over 100 years ago. I spent a long time in Harry Kellyh's cottage talkinbg to the staff aboiut the way of life. Do try the bonnag in the cafe. The Grove Museum in Ramsey reflects life of a wealthy C19th Family. The delightful Groudle Glen Railway was built to carry Victorian holiday makers to a zoo in the cliffs. The polar bears and sea lions are long gone but the railway has been lovingly restored and is run by volunteers. The homemade cakes on a Sunday afternoon are some of the best on the island. There is plenty of good walking with three long distance footpaths and shorter walks through the wooded glens. Again each are very different I avoided the high adrenaline activities like surfing, kayaking, abseiling, gorge walking. We also avoided the popular TT weeks and Grand Prix when roads are closed and bikers test their machines to the extremes at speeds of up to 200mph. ear. Roads are closed when races take place and speeds can reach up to 200mph. It is pretty scary - and that is just the spectators!

The Isle of Man really does cater for everyone AND finally, don’t forget to say “hello" to the Little People when you cross the Fairy Bridge on the A5... My trip report for a holiday in 2019 can be read here.
Last edited: Dec 17, 2022
http://wasleys.org.uk/eleanor/index.html
You must log in or register to reply here.
Share:
Email Share Link