This is a lovingly restored narrow gauge railway that used to carry Victorian holiday makers down a wooden glen to a small zoo in the rocks below. 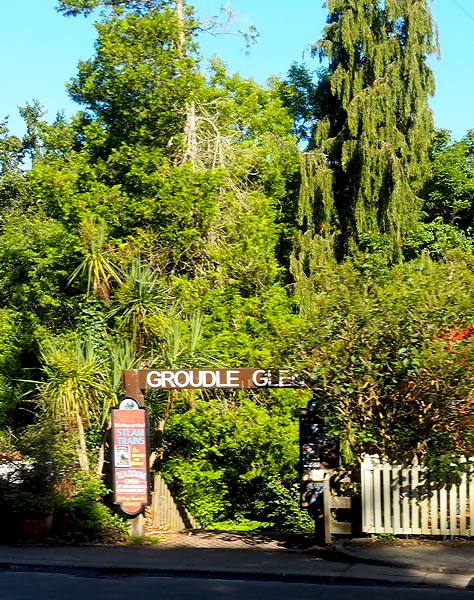 At the end of the C19th the Isle of Man was undergoing a tourist boom. Groudle Glen was originally a remote hamlet of a few houses with a steep valley running down to a small harbour. A large hotel was built at Groudle Glen next to the Douglas and Laxey Coast Electric Tramway (later the Manx Electric Tramway).

Richard Maltby Broadbent who had a family farm near by, opened up Groudle Glen as a tourist attraction. It was promoted as the ‘Fernland of Mona’ and Broadbent planted hundreds of trees on the bare hillside.

Visitors paid a fee and could explore the rustic paths and bridges along the glen with attractions like lily ponds, dance floor, bowling and croquet greens, bandstand and various stalls. 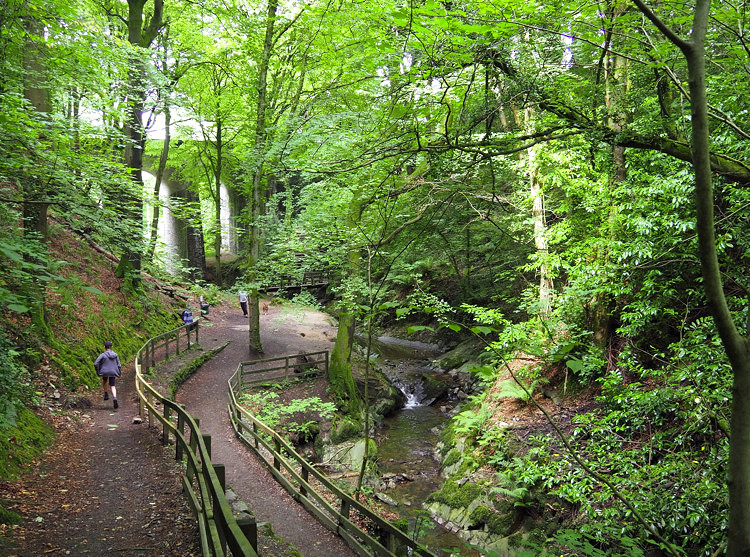 Later a waterwheel was added along with fairy lights. A rocky inlet at the headland was dammed and closed off with iron bars and sea lions were introduced here as a mini zoo. Later two polar bears were added. A bridge across the inlet let visitors admire the sea lions and polar bears. There were tropical birds as well as brown bear cubs which tourists could take for a walk.

As the popularity of the zoo increased, Broadbent came up with the idea of a narrow gauge railway which would run down the glen to the headland.

The line was completed by 1896 running from Lehn Coan near the hotel. It climbed up out of the glen and round the top of the cliffs to the zoo terminus station. A small steam engine, Sea Lion, was bought from Bagnalls of Stafford. The railway was an immediate success and extra coaches were needed. In 1905 a second steam loco, Polar Bear, arrived and more coaches. A passing loop was constructed allowing a two train service to be run.

The line closed during World War One and the animals were ‘released’. The line eventually began running services again in 1920. The sea lions were reinstated but not the polar bears. The line was now owned by a local business man, Alfred Lusty, who decided the two steam engines were causing problems and would be too expensive to overhaul. He purchased two four wheel battery electric locomotives which were named Sea Lion and Polar Bear to replace the steam locos.

Trains continued to run until the outbreak of the Second World War. The locos were greased up and put into storage with the coaches. The sea lions were released. By 1946, the railway had suffered from vandalism. The engine shed had been broken into and brass fittings stolen. Maintenance records and other documents had been destroyed.

The line reopened in 1950 with Polar Bear and six coaches. Sea Lion was stripped for spares and left rusting in the open air. A landslip made part of the line unsafe between the Headland loop and the zoo terminus.

Trains ran as far as Headland but only during the evening as the driver worked on the Highway Board steam roller during the day. The glen attractions were still there, although the glen was becoming overgrown.

In 1959 there was a bad vandal attack on Polar Bear and no trains could run. In 1961 the line reopened again with a patched up Polar Bear. There were plans to return Sea Lion to the makers for a major overhaul, only to discover the firm had closed down. Passenger numbers dwindled and the railway closed after the 1962 season. A tree fell on the engine shed and vandals pushed at least one coach down the side of the glen.

The line was scrapped in the 1970s and the rolling stock sold. Polar Bear was sold to Brockham Museum Association in 1966 and was transferred to Amberley Museum and Heritage Centre in 1982. She is still there. Sea Lion moved to the Midlands Steam Centre in 1981.

By 1979 all evidence of the railway had disappeared.

In 1982, an enthusiastic band of volunteers from the Isle of Man Steam Railway Supporters Association decided to reopen the line. They bought track, points, locos and carriages from a narrow gauge railway from Dodington House near Bristol which had gone into liquidation.

Restoration work began from Headland and Santa Special trains ran in 1983 between Lime Kiln Halt and Headland. The track was then continued to Lhen Coan, reaching there in 1986. The station platform, engine and carriage sheds have been rebuilt. 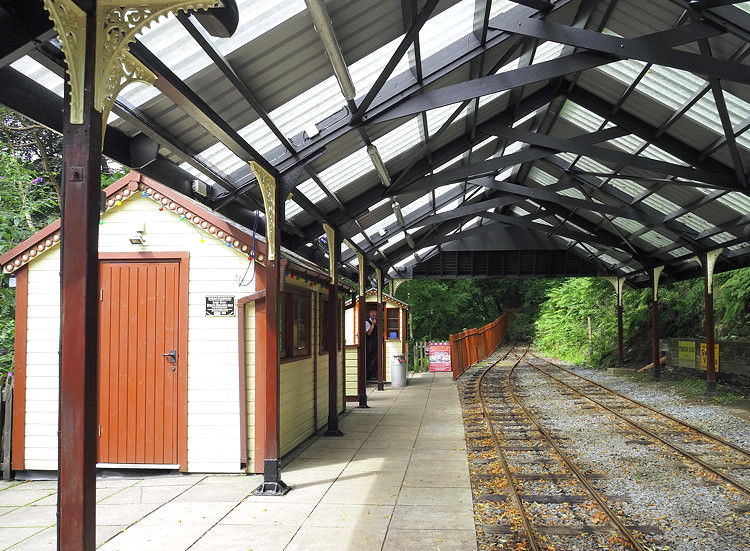 The railway acquired more track from the Stoke on Trent Garden Festival after it finished in 1986. Advice was sought about extending the railway to Sea Lion Rocks and the civil engineer advised this could be done by rebuilding further inland from the original trackbed. This stretch of track was officially opened in 1992 with a run round loop. The original track can be seen at the end of the station. A new cafe was built, which serves some of the best (and cheapest) home made cakes on the island on Sundays. Sea Lion was returned from the Midland Steam Centre. She was stripped down and restored to working order and operated alongside the two diesels, Dolphin and Walrus. In 1998 Annie appeared on the railway. This had been built by a Groudle Glen volunteer as a replica of a 0-4-2T Bagnall built in 1911 for the Gentle Annie tramway in New Zealand, and is mechanically similar to the original Polar Bear. In 2003, a battery electric loco was purchased and named Polar Bear. Another recent arrival is Maltby, named in honour of the founder of Groudle Glen. This is a diesel loco built to resemble a steam engine. She originally worked at Clacton Holiday Camp and featured in the TV sit com ‘Hi Di Hi’ before arriving at Groudle Glen in 2007. She has been carefully restored at the workshops of the North Bay Railway in Scarborough. She is used to pull the last train of the day. Brown Bear, a replica of the original Polar Bear, now at Amberley has been built by the railway an entered service in 2019. Another new steam locomotive, Otter, built by the North Bay Railway Engineering Works in Darlington also joined the fleet in 2019. Lhen Coan station is reached by a ten minute walk following the river down the glen and a steep climb up to the station. From here, the track runs through woodland. Line Kiln Halt is an intermediary station with the remains of a lime kiln. Paths drop down to the pebbly beach at Port Groudle and the holiday cottages.

The railway now swings out onto the open hillside and the passing loop at the site of Headland Station before arriving at Sea Lion Rocks. At Sea Lion Rocks it is possible to see the remains of the sea lion and polar bear enclosures. This may only be a short run but it is great fun.