The only electric mountain railway in the British Isles With increasing numbers of visitors to the Isle of Man and the opening of the electric railway to Laxey, plans were drawn up for a tramway up Snaefell, the highest mountain on the island. The route was first surveyed in 1888 by George Noble Fell, with plans to use a central third rail (the Fell Rail) for propulsion and breaking.

Although approved by Tynwald, the railway was not built until 1895. The five mile track took just seven months to build and was opened on 21st August. It was an immediate success with 900 passengers per day for the rest of the season.

The system was built as an electric railway with power supplied by overhead wires as it was found the cars could cope with gradients as steep as 1:12. Cars were fitted with Fell breaking equipment as an additional safety precaution for use on the down trip, and the third rail is clearly visible between the tracks. The gauge is 3’6” which allows for the extra rail.

There is no winter service as the overhead wires on the exposed upper part of the route are taken down to avoid damage from icing.

Five of the original cars are still in use. The original livery was Prussian Blue and cream, with Snaefell Electric Tramway painted on the sides. 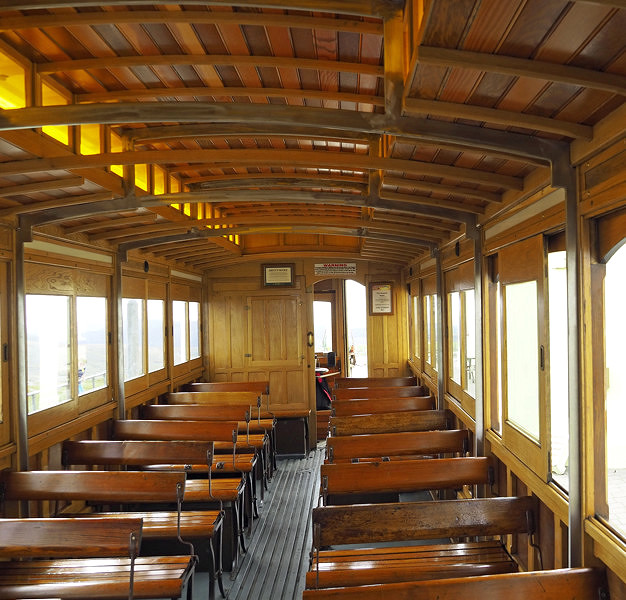 The railway also has a four-wheeled wagon used to carry supplies to the summit railway station, which has no road access. The wagon is propelled in front of the first morning car which delivers the staff to the summit, and remains at the summit during the operational day, returning behind the last tram. There is no water at the summit so everyday a tram delivers a bowser of drinking water for the restaurant.

The Snaefell Mountain railway shares a terminus with the Manx Electric Railway at Laxey. The rustic wood building with a corrugated iron roof dates from when the line opened. The stone build sheds housing the rolling stock were rebuilt at the end of the C20th. 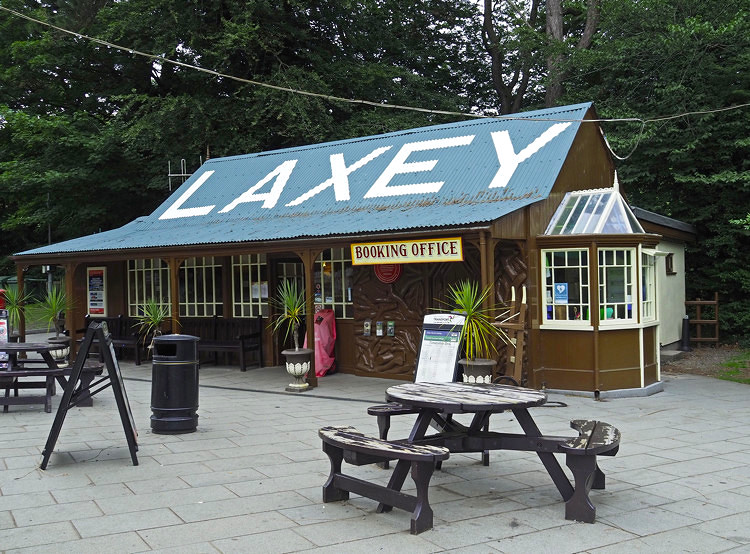 Leaving Laxey the line passes Dumbell’s Terrace and begins to climb. There are good views across the valley to Lady Isabella wheel. Pictures were taken through the glass, hence the ‘soft’ focus. The line runs along a ledge cut out of the open hillside and supported by a stone buttressed wall. There are views across the valley to Agneash and back down to Laxey. The valley sides get increasingly steep and the remains of the Snaefell mine can be seen at the head of the valley with leats supplying it with water. Lower down the valley is the remains of the weigh bridge. This was a completely separate enterprise to the Great Laxey Mines. Lead taken by horse and cart to Laxey and then exported by boat to England for smelting. The remains of the original power station with its rusty boiler can be seen just below the line. The line crosses the A 18 at Bungalow Station, the only intermediate station on the line. This was built in 2002 to replace a small waiting shelter. During the TT races, trams terminate on either side of the road and passengers connect by means of a footbridge.

Beyond Bungalow station, the line loops round the side of Snaefell with views up Sulby Glen to the reservoir and across the flat plain of the north of the island, as well as North Barrule. The original summit building was a wooden style chalet but this was replaced by a larger castellated building. This was gutted by fire in 1982 and replaced by the present rather characterless building, with a cafe. The summit is flat and grassy with a trig point with direction finder. The Civil Aviation Authority also have a transmitter mast and station at the summit.

There are spectacular views from the summit on a clear day and England, Scotland, Wales and Ireland are visible as well as the north of the island and back down the valley to Laxey. But the weather can change very quickly up here. The cloud can roll over and obscure the views. Eleanor said:
The railway also has a four-wheeled wagon used to carry supplies to the summit railway station, which has no road access
Click to expand...

Refreshing to hear of a place that has no road access to its highest summit! Hope things stay that way....

I'm sure it will. There would probably be an major outcry if it was suggested!
http://wasleys.org.uk/eleanor/index.html
You must log in or register to reply here.
Share:
Email Share Link