At the southern end of the island, Port Erin is a small settlement around a beautiful enclosed sandy beach, protected by Bradda Head to the north and the Mull peninsula to the south. On a clear day

On a clear day, there are views across to the Mountains of Mourne, nearly 30 miles to the west. 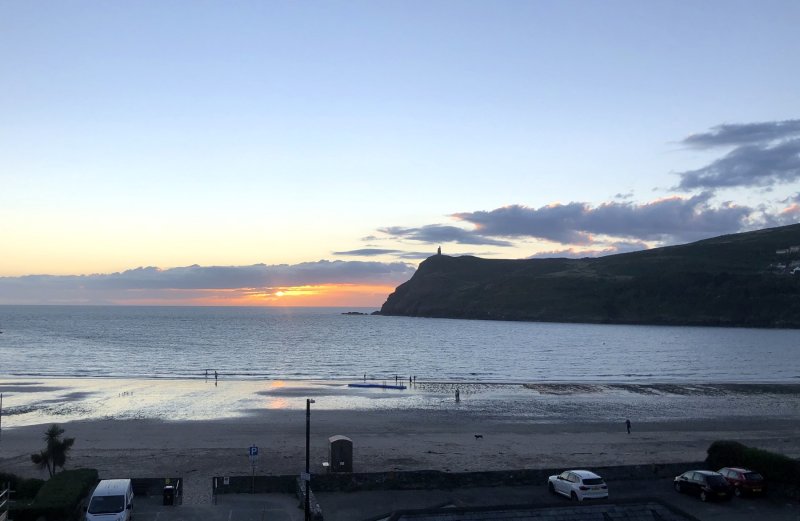 Before the arrival of railway in 1874, Port Erin was a small settlement with a few houses along Shore Road, and scattered dwellings on Bradda Head. The population earned their living from fishing, subsistence farming and mining. The shallow bay provided easy landing for the fishing boats.

A vein of copper ran through the Bradda headland and was mined in the C18th and C19th. The remains of the engine house, adit and entrance shaft of the South Bradda Mine are still visible on the shore below Milner’s Tower.

Construction of a breakwater began in the 1863 as it was hoped this would mark the start of a new ferry service between Port Erin and Holyhead, and provided the incentive for the Isle of Man Railway Company to extend their line from Castletown to Port Erin. Unfortunately this was destroyed during a severe storm a few years later and was never rebuilt. The remains of the breakwater can be seen at low tide and are marked by a buoy. The ferry service never materialised, although the railway did arrive in 1874.

This brought Victorian holiday makers to Port Erin and it was the choice for the more well to do visitors. Splendid Victorian hotels appeared above the beach. Smaller guest houses soon appeared as well as a shopping area. An open air swimming pool was constructed at the base of the cliffs and was unusual at the time as it allowed mixed bathing. It closed in 1981 and is now looking very dilapidated. 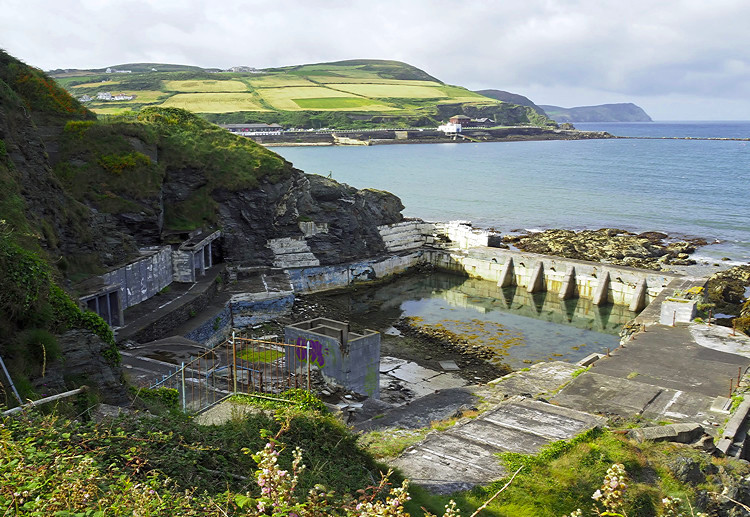 William Milner, a wealthy C19th Birkenhead safe maker, spent part of the year in Port Erin and retired there. He set up a number of charities to help local residents, particularly poverty stricken fishermen. He was responsible for building the first hotel (Falcon’s Nest), St Catherine’s Church, a terrace of cottages along the sea shore and his own private residence “The Rest”. The tower on top of Bradda Head was erected by public subscription in his memory, although Milner ended up financing much of the project. It is said to resemble the key to one of his safes. Tourist numbers dropped during both World Wars and, during the Second World War, many of the hotels were used to house women and children of ‘enemy aliens.’ Tourism revived after the war but declined again in the 1960s and 70s with the arrival of affordable foreign holidays Many of the hotels were closed, turned into flats or pulled down. Fishing and mining is long gone and Port Erin is now primarily a dormitory settlement for Douglas. It is sufficiently far from Douglas to remain a thriving centre with a good shopping centre and a large branch of Shoprite. In the summer the holiday spirit revives.

Milner’s Tower stands proud on Bradda Head and is a short walk along the beach and up through Bradda Glen. Climb the 40 steps to teh top for views of the surrounding countryside. To the south, the Mull Peninsula protects the small harbour with its Art Deco RNLI station, dating from 1924 and one of five on the island. The coastguard and Harbour Master are based in small buildings by it. Close by was the University of Liverpool Marine Biology Research Station which closed in 2006. The Shona boat trips to the Calf of Man and the Sound leave from here. Beyond, the Raad Ny Foillan, the Coastal Footpath, is a dramatic walk along the cliffs to The Sound. Port Erin in the terminus of the Isle of Man Steam Railway which runs during the summer months. The splendid 1904 red Ruabon brick station building is in the centre of the town and with the bus terminus outside, is now the transport hub for people arriving by public transport. With its attention to detail, it has been described as the “most beautiful building in the town”. The platform is shorter than in its Victorian heyday and the sidings are now the bus depot for Bus Vannin. The engine shed and water tower still survive. The excellent small museum is in the former goods shed. This has two steam locos as well as wagons, ticket office, other artefacts, as well as lots of information about the different railways. St Catherine’s Well on the Promenade, is the site of a natural spring which flows under the roadway onto the beach. The early Irish missionaries built a small chapel (keeill) near it and the well became known for its healing properties. The Keeill has long disappeared under the waves,
When William Milner died in 1874, he left a plot of land near the well, along with £1000, to build a new church in memory of his wife Jane. It would save parishioners the walk to Kirk Christ, the parish church between Port Erin and Port St Mary. The church was to be dedicated to St Catherine.

St Catherine's Church was built using Manx Slate and opened in 1880. It was a simple building, based on the C13th Gothic style and was extended at the west end a few years later when more seating was needed for the summer influx of visitors. A small tower was added on the south west side. This contains two bells. The larger one was the fog bell at the Chicken Rock lighthouse until 1909. The inside of the church is very simple and has changed little since it was built. Kirk Christ Church, the original parish church, is a simple whitewashed building on the edge of Port Erin. It was restored in the C19th and is still in use. It has some rather nice C19th stained glass windows, including one to William Milner. Just beyond the church is the entry to Ballachurry Nature Reserve. This was originally arable farmland which became a nature reserve in 2007 when work began to ‘reclaim’ the land by planting trees to form a mix of woodland, scrub and open glades. Two ponds were dug to encourage wildlife. There is an information board and a circular walk around the reserve. On the outskirts of Port Erin, just south of Ballafesson Road is the remains of a C11th or C12th motte, which was possibly one of the three castles built by Magnus Barelegs.