At just over 15 miles long, this is the line between Douglas and Port Erin is the only railway line to survive on the Isle of Man. The introduction of a regular steamship service between Liverpool and the Isle of Man opened up the island to tourism. Soon visitors were arriving in their thousands and Douglas developed rapidly as a tourist resort with hotels being built along the Promenade.

In 1871, the Isle of Man Railway company was formed to open up the rest of the island to tourism and plans were drawn up for railways from Douglas to Peel and Castletown. Construction began in 1872 and the line to Peel, running along the central valley, was soon opened and an immediate success.

The line to Castletown cut across the lie of the land and was more expensive to build as it required heavy earth works and structures with steep gradients between Douglas and Port Soderick. The line eventually opened to Castletown in 1874 and was later extended to Port St Mary and Port Erin.

Later a line was opened from St John’s, on the Peel line, to Ramsey. All the lines were single track with passing places. Trains were steam hauled.

Passenger numbers fell drastically during the First World War, but recovered in the interwar years, although they faced increasing competition from local charabanc companies. With road improvements, many people were switching to the buses.

The railways were busy during the Second World War moving materials to build airfields in the north of the island and transporting servicemen. Many hotels and guest houses were used to house ‘enemy aliens’.

After the war, with the advent of the family car and mass foreign tourism, tourism numbers never recovered and passengers on the railways continued to fall. Services ceased in 1966 and the Douglas to Peel Line and the St John’s to Ramsey lines were both closed. The Douglas to Port Erin line reopened but just running a summer service. The line was sold to the government in 1978 and is now run as a heritage railway, still using the original locos and carriages.

Douglas Station was originally a wooden structure built on land reclaimed from the the River Douglas. This was replaced by the splendid red Ruabon brick building with its ceremonial arch, built between 1887-1913. As well as ticket offices, it housed telegraph and parcels office as well as general and ladies’ waiting rooms, refreshment rooms and a bar. At its height, one hundred trains a day arrived and left from the station which had separate platforms servingd the Peel and Port Erin branches. 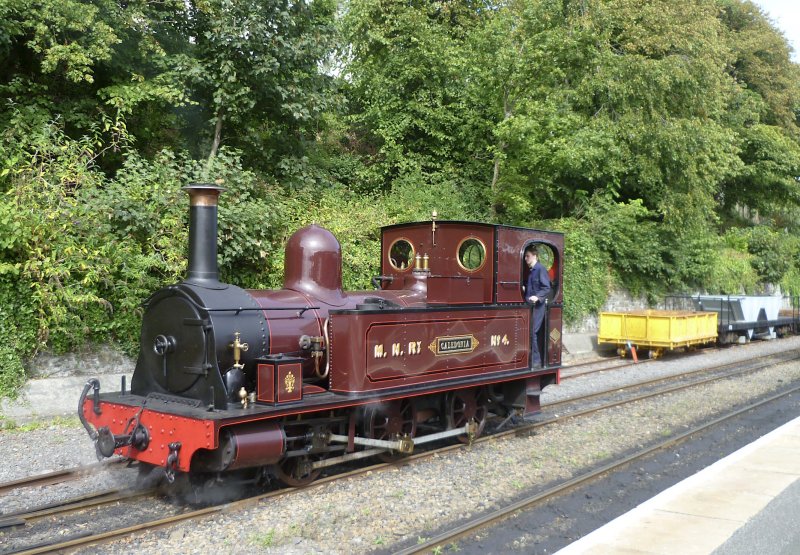 Beyond the station are the sheds, workshop and water tower. 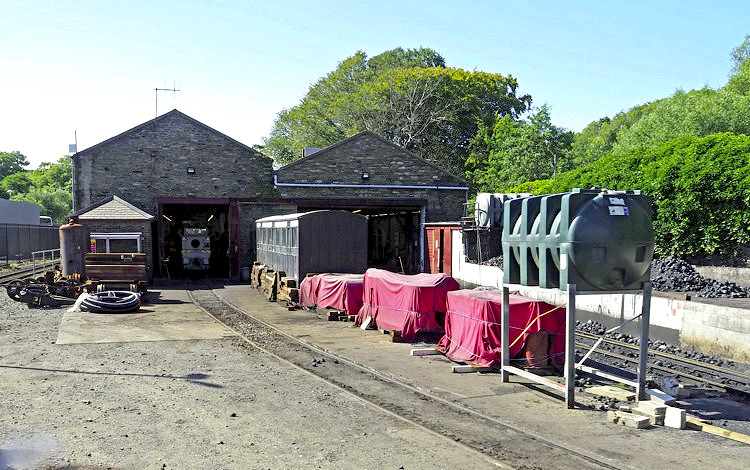 The line climbs up through the Nunnery Woodlands past an industrial estate and Okell’s brewery before swinging out onto the open hillside beyond Kewaigue with views across farmland to the Marine Drive and the sea. The first station on the line, and also passing point, is Port Soderick. The original wooden station building was replaced by the current grandiose station building in 1898, with refreshment room and booking office. The station master and his family lived on the first floor. Visitors got off here for the short walk down through the glen to Port Soderick beach with its walkways across the rocks, paddling pool and amusement arcade.

The station building is now a private residence and the station is now unmanned with a small wooden shelter. After Port Soderick, the line climbs through the Crogga Estate woodlands with distant views of the sea, before reaching the summit of the line at 588’ and beginning to drop down to Santon Station. This still retains its original wooden station building with corrugated iron roof. This now an unmanned halt but, until the 1960s, served as an important cattle loading dock for the area. Beyond Santon, the railway runs through undulating farmland with more distant views of the sea as Ballasalla is approached. Ballasalla was originally an important station with a goods yard, good shed and a cattle dock for traffic going to Ballasalla market. The original station buildings on the north side of the track were demolished so the land could be developed commercially. The sale funded the construction of new platform buildings on the southern side. There is a small water tower at the end of the platform. After Ballasalla, the line follows the Silverburn to Castletown. The small request halt at Ronaldsway was opened in 1967 to serve passengers for the airport.

Castletown is where trains pass and exchange tokens. The station buildings are built from the local limestone and it also had a large good’s shed. There is a brief glimpse down the river to Castle Rushen. After Castletown, the line cuts inland past the tiny request halt of Ballabeg to Colby. This is again an area of fertile farmland with hedges and trees, with views across to South Barrule.

Colby Station is on the southern edge of the village and has a small wooden shelter. The railway runs south of the A7 with the long linear settlement of Colby Level. As the line turns south, there are glimpses of the Shore Hotel and Gansey Bay. To the north, the cleft down to Fleshwick Bay can be seen.

Port St Mary Station is another splendid red Ruabon Brick building about half a mile from the town and next to the Station Hotel. It is the only large station to be built without a passing loop, as it was so close to the terminus at Port Erin. The station building is now unused and has been for sale for many years. The terminus at Port Erin is less than a mile away. Again the station buildings reflect the importance of Port Erin as a holiday resort. The splendid 1904 red Ruabon brick station building is in the centre of the town and, with the bus terminus outside, is now the transport hub for people arriving by public transport. With its attention to detail, it has been described as the “most beautiful building in the town”. The sidings are now the Bus Vanin storage depot and a new carriage shed has been built on the far side of this.

The engine shed and water tower are still in use. The stone built good’s shed is now the museum. It is a bit like the Tardis - it doesn’t look very big from the outside but is a lot larger than you might think. It contains two locos, carriages, wagons, artefacts and a wealth of information and pictures about the different railway lines that once served the island. There is a simulator allowing you to drive a diesel from Port Erin to Port St Mary and also shunt at Douglas Station.

Staff are friendly and informative and it has a good little shop too.