England was populated in prehistoric times and many burial tombs, stone circles and hill forts remain. The Roman conquest of Britain started in 43AD during the reign of Emperor Claudius. They built roads, towns and villas in the countryside and the remains of many have been preserved. The medieval history is everywhere, in the castles and historic houses. The industrial revolution also left sites that are interesting to explore today.

There is more to see in England than just London. We hope these travel articles will inspire you to get out into the English countryside.

Popular areas to visit: The Cotswolds in Gloucestershire and Oxfordshire, Devon and Cornwall in the southwest, the Lake District and the Yorkshire Dales.

United Kingdom, Britain, Great Britain - What's What?
Why are there so many names for the UK?

The United Kingdom, Britain, Great Britain - what do you call that cluster of islands west of northern Europe?

Wikipedia - Terminology of the British Isles: This article explains this all in more depth.

The United Kingdom is made up four countries (England, Scotland, Wales, Northern Ireland) and these countries are made up of counties which are grouped into official regions. We list our articles for England by the regions listed below. 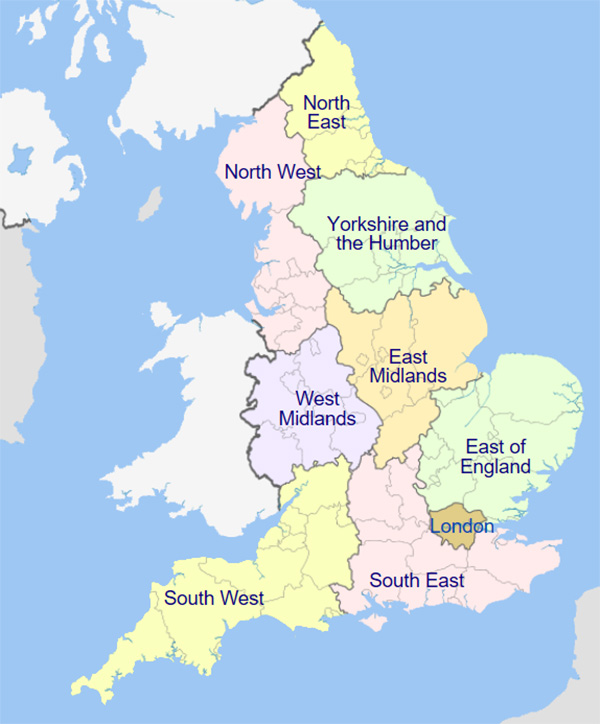 North East - Northumberland, County Durham, Tyne and Wear, and the area of the former county of Cleveland in North Yorkshire

Cotswolds - not an official region, but a popular tourist area mostly in Gloucestershire and Oxfordshire.

We group the rest of the UK and Ireland by country.

Scotland - includes all counties in Scotland

Wales - includes all counties in Wales

Ireland - not part of the United Kingdom but we put it in this section.

See maps for regions of each country at the bottom of this page.

Maps of the Regions of the United Kingdom and Ireland 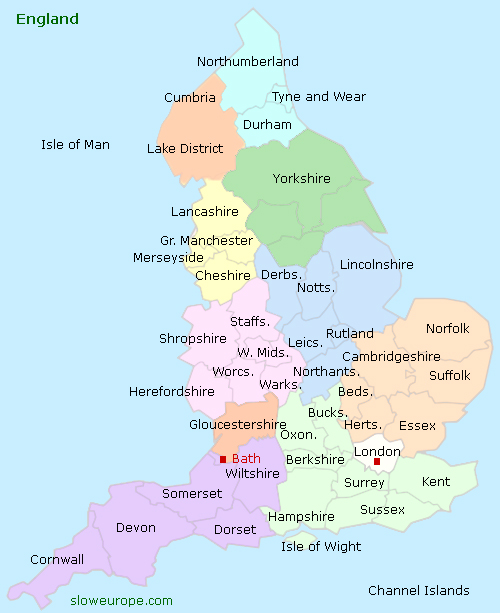 Contest 2019 Winner!
But note in that Wikipedia article:

In the media, particularly in the U.S., I see Britain used as synonymous with the U.K., such as this in today's New York Times:


Existing European Union insurance policies should stay in place after Britain leaves the bloc because the process of dividing them into British and EU contracts would be too complex, Lloyd's of London Chief Executive Inga Beale said.

The Lloyd's of London insurance market, which started life in Edward Lloyd's' coffee house in 1688, derives around 14 percent of its business from Europe excluding Britain.
​
When the NYT lists currency exchange rates, I think they say "Britain (Pound)."

It is so confusing! I am not sure what letters sent to me from the US should list for country!

I updated it to:

Contest 2019 Winner!
I'm hoping that people in the U.K. or otherwise more familiar with the matter will weigh in: I'm taking it that the preferred usage is Great Britain for the one island, and Britain to be more synonymous with the full U.K.

I had a discussion in SlowTrav on the matter, and was directed to this video, which may tell you more than you want:
View: https://www.youtube.com/v/rNu8XDBSn10

Today I tackled organizing our resources (travel notes) for the UK and Ireland. Originally I pre-fixed them by county, but there are way too many counties, so I set up pre-fixes for the official regions instead. I listed these in this resource which I set to always be listed at the top of the UK and Ireland resources.

I updated all our resources to have the correct region. Hopefully this will let us find information more easily. @Eleanor , could you check them over since you have contributed the most resources to this section? Thanks!
Pauline Kenny - forums administrator
Slow Europe - Instagram