Possibly one of the most important hillforts in England - and yet no-one knows about it!


Standing up to 100m high, the wooded Worlebury Hill dominates the northern edge of Weston-super-Mare. It is the site of one of the most significant hillfots in England with its three Bronze Age ditches and seven Iron Age valla (walls and ditches). You won’t find anything about it on the Weston Super Mare website and it only merits a small mention on the North Somerset one. It isn’t signposted from the town although there two information boards at the site. It seems to be ignored and unloved by the local council but is cared for by a dedicated band of volunteers who been working over the last few years to remove the undergrowth and expose the archaeology. 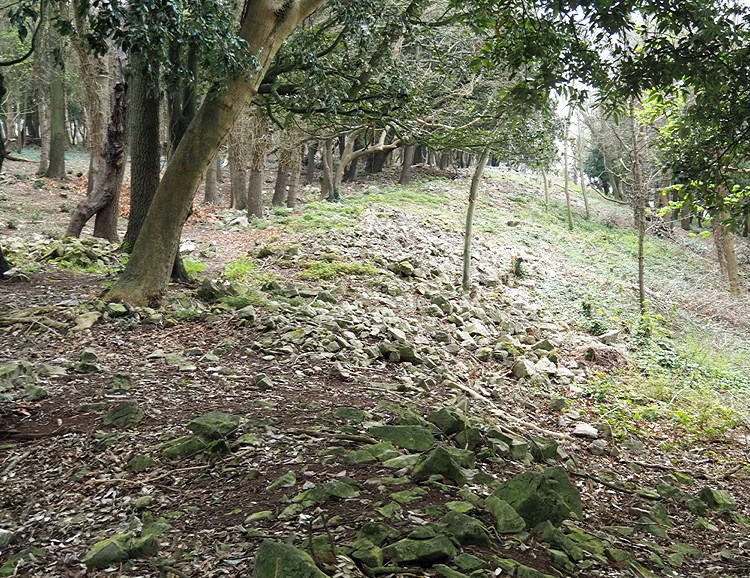 The hill is surrounded by steep slopes on three sites and was originally open grassland which would have had excellent views across the surrounding area.

Being limestone, it is surrounded by massive dry stone walls, unusual in English hill forts. It dates from around 600BC and was built on an earlier Bronze Age settlement. It was probably abandoned before the Romans arrived.

The seaward tip was settled first and the stone ramparts enclosed an area of about 10 acres. It was inhabited by the Dobunni tribe who occupied area with their main base near Gloucester. It is thought that the chief and his immediate family lived inside the fort, with the rest of the population scattered along the hillsides, which were covered with small field systems. There was no water supply on top of the hill and water would have been collected from springs lower down, possibly through passages cut down through the cliff face.

There were three entrances through the walls, one at the western tip which is accessed from steps from Camp Road. Another on the southern wall near the modern access from Trinity Road. The third entrance was at the eastern end of the camp. This was not protected by steep sides and was defended by a series of seven valla, as can be seen on the plan taken from here. 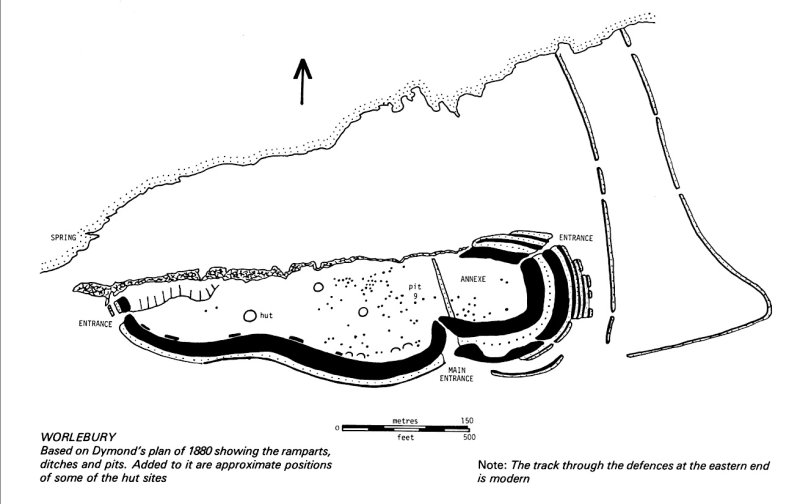 The stone walls were probably stood about 5m high and would have been a formidable defence. The modern entrance cuts through these. The outer valla were dug out oif the bedrock rather than piling up loose stones to forn the walls. Beyond are two of the Bronze Age ditches, which cut off the peninsula. The top of Worlebury hill was traditionally used for grazing sheep from prehistoric times, with their dung being used to fertilise the fields on the lower slopes. In the 1820s, the area was fenced off and planted with trees by the local landowner John Hugh Smythe Piggott. These were felled for timber in World War One. The trees now seen are self-set secondary growth. They include a lot of Holm Oak which is a mediterranean species that thrives in the maritime conditions. Being evergreen, nothing grows under it. The trees are shallow rooted and subject to wind blow damage. The council now have a license to fell these trees and the volunteers are planning to return the top of the hill to its original grassland with wide diversity of flowering plants. Yellow rattle, a partial parasite on grass roots, is being used to weaken the grass and encourage the regeneration wild flowers. The remains of hut circles can be seen. There are also about 100 stone lined grain pits found inside fort. These are were 2m in diameter and nearly 2m deep. Evidence of barley, spelt wheat, oats, and brome have been found inside them. They would have been sealed over with an air tight clay seal when full to prevent the growth fungi, with the grain stored for the following year. After a few years, mould would get established in the pits, so new ones would be dug and the discarded ones were probably used for rubbish. Broken shards of cooking pots have been found. There is also a large rectangular pit of unknown function, which is often inaccurately described as a ‘Roman temple’.

The remains of eight bodies have been found in the grain pits. The soil is too shallow to dig graves. These have sword marks on their skulls which could be evidence of an execution.

The hill is popular with local dog walkers and despite the trees, the hill is still a good view point with views down across Weston-super-Mare.