Barnard Castle, or Barney as it is affectionately called by the locals, is a thriving small market town at the mouth of Teesdale. Although it has a Morrisons behind the market place, it still manages to retain many small family owned shops. It still has a weekly market as well s monthly farmers market. There are plenty of places to eat as well as some good antique shops. GlaxoSmithKlein have a large factory on the edge of the town and is a major employer.

The town grew up round the Norman castle which stands high on a bluff at the top of the town overlooking the river.

The town still retains its wide main thoroughfares that were traditionally used for the market as well as cobbled streets, twisting lanes and narrow passageways.
It still has a medieval feel to it. 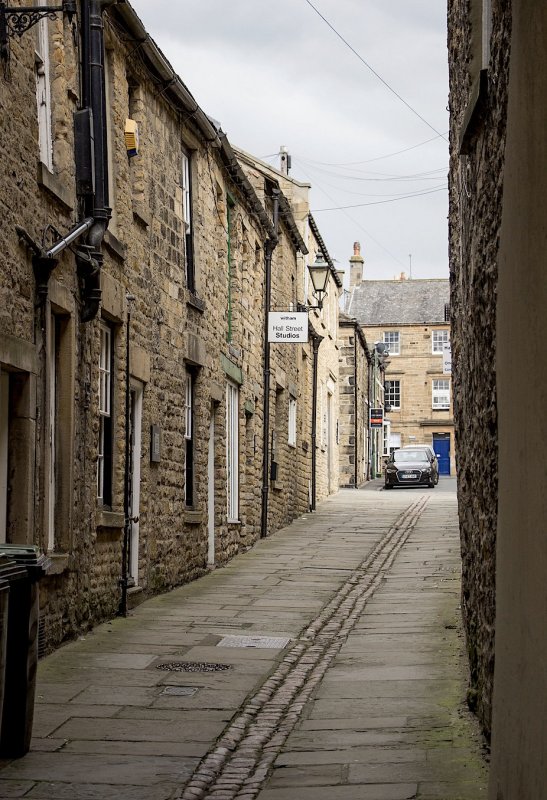 At the bottom of Horse Market, the broad main shopping street, is the Market Cross or butter mart. The octagonal building dates from 1747 and was built to replace the old tollbooth. Butter and other dairy produce was sold from the ground floor, while the upper room was used as a courthouse. Originally the base was closed off with heavy wooden shutters. It now serves as a roundabout. Close by is St Mary’s Church which was built at the same time as the castle. On the edge of the town is the amazing mock French Château built in the mid C19th by John and Josephine Bowes who lived in nearby Streatlam Castle and had links to the Bowes Lyons family, to hold their eclectic collection of fine art, porcelain, furniture and paintings. The Bowes Museum is a major tourist attraction drawing visitors in to the area.

We always enjoy visiting Barney with its stone buildings and slab roofs. It has very much the feel of an upland town and is gateway to some of the best scenery in England with Stainmore, Teesdale and Weardale all within a short distance. The castle at Barnard Castle is one of the largest castles in the north of England, set high above the River Tees. Guy de Baliol was granted land here by William Rufus and built a wood and earthwork fortification. This was soon replaced by a stone castle. When John Baliol, King of Scotland was defeated by Edward I, ownership of the castle passed to the Nevilles, Dukes of Warwick and then by marriage to Richard III. The estate was forfeited to the crown after the unsuccessful Uprising of the North in the C16th. It eventually passed into the ownership of the Vane family who used stone from Barnard Castle to rebuild Raby Castle, leaving it a ruin.

The castle is made up of four wards and surrounded by a curtain wall with towers. The outer ward to the south was the largest and contained the Market Gate which was the main entrance from the town. This contained the manorial farm and the chapel containing the tombs of the Baliol family. In the mid C14th the outer ward was abandoned apart from the chapel, making the castle smaller and cheaper to run. Now all that remains are a few bumps in the ground and views across to the town. The main entrance now is through the north gate into the Town Ward. This was a place of refuge for the townsfolk and contained a number of permanent buildings, now ruined foundations along the side of the walls. This contains the sensory garden. The Middle Ward linked the three other wards of the castle and served as a fortified entry area or barbican through which all visitors to the castle had to pass. It also contained stables and accommodation for the castles officials.

The Inner Ward was the core of the castle containing the keep on top of a motte, great chamber, great hall and kitchens. It is surrounded by a deep ditch, now crossed by a modern wooden bridge. The keep was the main living quarters until the Great Chamber was built in the C15th. Below the keep is the undercroft which was used for storage and contains the well. The bakehouse and kitchen were separate to reduce the risk of fire. They have a separate stone lined cistern to provide them with water.

The castle is tucked round the back of Horse Market and not visible from the town itself. The best views are from the bridge across the River Tees.

The Castle is in the ownership of English Heritage.
http://wasleys.org.uk/eleanor/index.html

St Mary’s Church is a large and attractive building on the corner of Newgate and Horse Market, near the Butter Market. It has a tall battlemented tower at the west end with battlemented nave and side aisles. The first church was built at the start of the C12th by Bernard Balliol who built the castle. This has been rebuilt and extended over the years and only the north aisle arcades remain of Balliol’s church. The south arcade is early English from about 1300. The north transept was added around 1380 and is decorated style. Richard, Duke of Gloucester, widened and extended the church in 1480 and added the clerestory windows. By the end of the C18th, the church was in a poor state of repair and in need of restoration.

Entry is through the south door under the tower, into a porch which contains a lot of memorials on the walls. The Norman south door is now blocked off and is the disabled toilet... An arcade of round pillars with round arches separates nave and north aisle. The south arcade is later and has octagonal pillars and pointed arches. 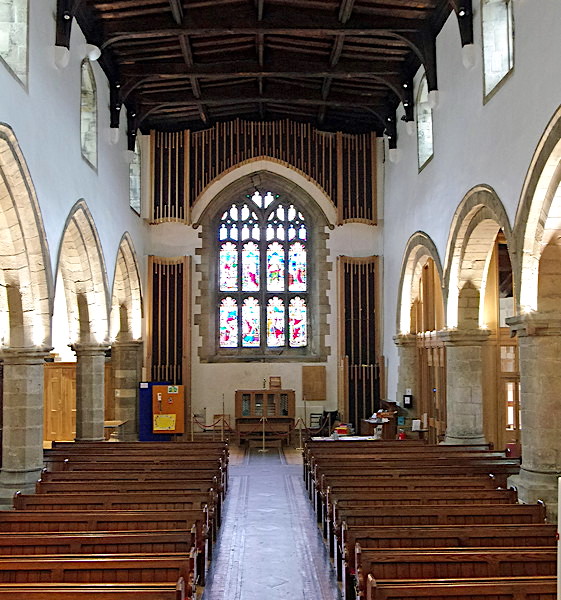 A flight of steps leads up under the pointed chancel arch into the chancel. The carved heads on the arch are thought to be Edward IV and Richard of Gloucester. The Yorkshire rose is carved on the stones round the arch. By the chancel arch is an open carved wood pulpit on a stone base. The chancel feels quite dark weigh its low dark wood roof and panelling around the bottom of the walls. On the north wall is a bread cupboard which was used to store bread to distribute to the poor. The font in the north aisle dates from 1485 and is made from local stone. The carvings have defeated attempts at interpretation and may be emblems of medieval guilds. On the north wall are two recessed arches containing an effigy of Robert Mortham, vicar of the parish and remains of medieval carved grave slabs. Near by is a stone carving representing St Anthony with his ‘dancing’ boars. St Anthony was a C3rd bishop and saint who spent time as a hermit in the Egyptian desert. His symbol was a pig, possibly representing the Deadly Sin of gluttony which he had overcome. There is another legend where the boar resisted the Devil’s bidding and defended St Anthony, so it may signify his spiritual purity and resistance of temptation. Very true Ian - I was debating about whether to include a comment about that or not..... It certainly put Barnard Castle on the map.
http://wasleys.org.uk/eleanor/index.html
J

Eleanor said:
Very true Ian - I was debating about whether to include a comment about that or not..... It certainly put Barnard Castle on the map.
Click to expand...

Well, I had to google that one. What a story! And the limited edition beer is the icing.

Everyone in the UK would have picked up the reference and 'doing a Barnard Castle' became part of the language. There was a lot of ribbald comment about the person in question who rapidly became despised by all.
http://wasleys.org.uk/eleanor/index.html
You must log in or register to reply here.
Share:
Email Share Link