One of the oldest libraries in Europe

Although each of the Oxford Colleges has its own library, the Bodleian Library is still at the heart of Oxford life. Not only is it one of the oldest libraries in Europe, it is one of the few libraries in Britain which receives a copy of every book and magazine published in Britain. It is very much a working library, although it is also popular with film makers. Harry Potter fans will recognise Duke Humphrey’s library and the Divinity school which was used for the infirmary.

It is not one building, but a series of buildings set around Old Schools Quad. Entry to the quad is free but there is a charge to go in the Divinity School. The other buildings can only be visited as part of a guided tour.

I signed up for the 60 minute tour which visited the Divinity School, Duke Humphrey’s Library and the Radcliffe Camera, rather than the Convocation House. The guide was excellent, very knowledgeable and a member of staff. We were given a clip on microphone to wear over our ear to listen to the guide and to cut down on noise in a working library.

The best entrance is through the Great Gate off Radcliffe Square with its massive wooden doors with the coats of arms of the different colleges.

The ticket office is just inside the doorway and it leads into the Old Schools Quad. As its name suggests, this is a quadrangle built in the early C17th with teaching rooms on the ground floor and reading rooms above. The university paid for the first two floors and Thomas Bodley provided the funds for the third floor. The shop is in one of the corners. The Divinity School is directly opposite the Great gate and reached through the Proscholium. The Divinity School was built in 1424 and took 60 years as fund kept running out. It was the first teaching room for the university. It could hold up to 300 students who stood in the main body of the hall The teaching staff sat on raised benches at one end and there was a teaching box used by the person conducting the session. The door at the far end leads into the Convocation House. The glorious fan vaulted ceiling was designed by William Orchard who later went on to design the fan vaulted ceiling in King’s College Chapel, Cambridge and St George’s Chapel in Windsor. The bosses and carvings represent donors who gave money for building the school. Sir Thomas Bodley’s personal strong box is displayed in the room. It contained the deeds of his properties and endowments. On the front were painted the arms of the University as well as his own. The intricate locking mechanism covers the whole lid and was further reinforced by two padlocks. After Bodleys’ death, the chest continued to be used as a safe until 1774. There were very few books available to the students and those were hand written, large and very heavy. Duke Humphrey, the younger brother of Henry V was a great collector of books around Europe and left his collection of over 300 books to the University. The Duke Humphrey library was built above the Divinity School to house this collection.

It is reached up a splendid wooden staircase with a large Benefactor’s Board hanging on the wall. Top of the list is Duke Humphrey in 1439 followed by Thomas Bodley in 1606.

Edward VI ordered all the books in the library to be burnt as he regarded them as Catholic books and therefore heresy. In 1559, the library was empty and in poor condition with rain dripping through the roof and holes in the floors.

Thomas Bodley was lecturer in Ancient Greek at Merton College when he was head hunted by Queen Elizabeth I to act as her spy in the Low Countries. He was so successful that he was appointed Ambassador to all Europe, with the highest authority of the Queen. He was a very powerful man.

He came back to Oxford in 1598, tired and ready to retire. He was shocked by the state of the derelict library and wrote a letter to the Chancellor asking if he could restore the library, fill it with books and pay for a librarian. Gifts of books poured in from his many friends across Europe and within a year the library was finished and fully stocked. An extension was added in 1610.

Books were now printed rather than hand written and the Stationer’s Company in London had the monopoly to print books. Bodley struck a deal with them that the library would be given one copy of every book they printed. This still happens to day.

Photography is not allowed in the library. It is a stunning building. The outer room has a gallery running round at first floor level, supported on wooden pillars. The panels of the wooden ceiling are painted with the open book of Oxford university. Behind is a long rectangular room with stacks of books at right angles to the walls. In front of each are small reading desks, now with electric sockets for computers. Again the panels on the ceiling are painted with the open book.

The tour ended in the Radcliffe Camera, the splendid neo-classical building built in the mid C18th to house the Science Library of the University. 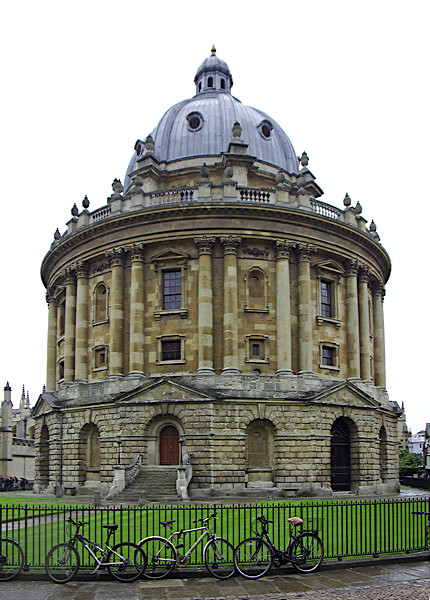 This was funded by the estate of John Radcliffe whose statue can be seen above the door of the reading room. He was a very successful doctor of medicine practising in London with a number of high profile patients including William III and Queen Anne. He was charging £40/hr for his consultations. When the Bodleian Library ran out of space in the mid C19th, the Radcliffe Camera was little used. The science library moved into a new building and it became a reading room for the Bodleian Library.

Inside it is a circular room with tall pillars supporting the first floor reading gallery and the lovely plaster ceiling.

This is a very worthwhile visit and a chance to see parts of the university which are not open to the public.
Click to expand...

while I didn't go inside I did walk around and take photos. Beautiful architecture!! thank you for your wonderful report!!

It is definitely worth going inside if you have the chance. Duke Humphrey's library is wonderful.
http://wasleys.org.uk/eleanor/index.html
You must log in or register to reply here.
Share:
Email Share Link