There is something special about stone circles and no visit to the Outer Hebrides is complete without visiting Calanais, which has been described as perhaps the most exceptional prehistoric monument in the west of Scotland..

Standing on a bare ridge above Loch Roag, Calanais Stone Circle is a prominent landmark in all directions, with the stones standing silhouetted against the sky line. On a sunny day against a blue sky, they look benign. In the midst of a thunderstorm with lightening flashing, they seem to absorb all the fury and energy of the storm, becoming threatening and sinister. On a clear moonlit night, they are quite magical and you can almost feel the spirits of the ancestors moving around the stones. On a clear moonless night, they may be lit up with a display of Northern Lights, the Merry Dancers.

There are myths surrounding the stones. The C17th islanders knew the stones as 'fir bhreige', or false men. One story says the stones are petrified giants who refused to convert to Christianity. Another that the stones were men enchanted by a sorcerer. Folk tradition also refers to the Shining One who walks the length of the avenue on Midsummer morning, blessing all who witness this.

It is a stunning site. As well as the main circle, there are other smaller and less well known circles in the surrounding area.

Seen from above, it is much more than a simple stone circle. There is a central circle of thirteen stones round a tall central monolith. 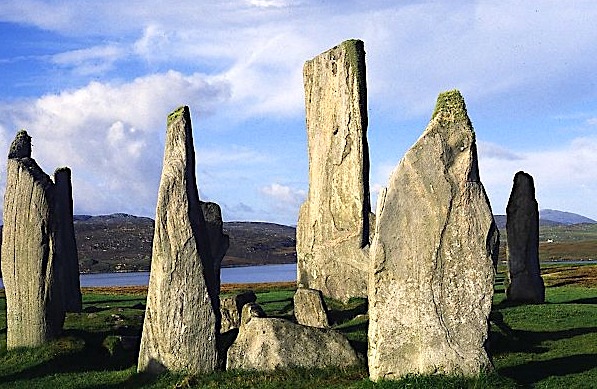 Four avenues of stones radiate out from here. The climate changed many years later, becoming a lot wetter which encouraged peat development. The site was no longer used and many of the stones were buried deep in the peat. The peat was cleared away in 1857 by Sir James Matheson who owned the land, revealing them in their full splendour again.

The stones are massive slabs of Lewisian Gneiss, which is one of the oldest rocks in the British Isles. The tallest stones are up to 10’ tall and it must have taken a massive effort to bring and erect them here. Each stone is slightly different with quartz, feldspar and specks of mica reflecting the light.

The stones are freely accessible at all times and are in the care of Historic Environment Scotland. The site never gets that busy unless a rare tourist bus arrives. Chances are you will have the place to yourselves, especially if you visit early or late in the day. The Visitor Centreis privately run and has a shop, cafe and interactive exhibition about the stones.
Click to expand...