Cheddar is a busy tourist town at the base of the Mendip Hills. Visitors flock here for the dramatic gorge and the caves. Even its name comes from the old English word for a deep dark cavity. There is good walking and plenty of tourist shops and tea rooms.

Away from the main street, it is still quiet and unspoilt. 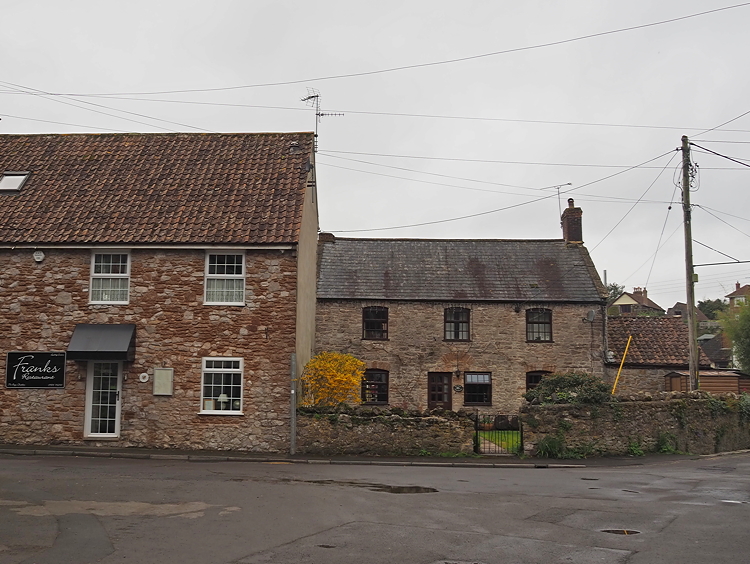 Its wealth came from farming and particularly cheese making, with cheeses being stored in the local caves to mature. Tourism really took off with the arrival of the Railway in the C19th. This was popularly called the ‘Strawberry line’ as it carried strawberries grown on the south west slopes.

Cheese is still made in the village by the Cheddar Gorge Cheese Company who have a shop selling many different varieties of Cheddar cheese from cave matured to vintage along with designer specialist flavours. This is the place to come to sample the cheese before buying. Somerset is also known for its cider, and next door was Legbender cider shop, selling bottled and draught cider.

The River Yeo flows through the centre of the town, arising from the depths of Gough’s Cave. The water is very clear with weeds growing on the base. It is a haven for wildlife with dippers, kingfishers and even otters. In the C17th and 18th centuries, there were several watermills along the stream and their weirs can still be seen. Cheddar Gorge can be seen as a large gash in the limestone hills above the town. The near vertical cliffs are up to 400’ high. It was formed by melt waters during the last ice age. The Yeo river carved out many underground caves, which are now open as tourist attractions. A narrow winding road makes its way through the gorge and is a dramatic trip. It is almost impossible to photograph the gorge from a moving vehicle. There are good views up the gorge from the coach park near the bottom. There are a few other pull offs as you drive up. Goats can be seen grazing on the steep hillsides.