Visitors to North Wales speed along the A55 and through the Conwy tunnel without a glimpse of the town. Long gone are the days of bottlenecks through Conwy when all traffic had to negotiate Telford’s narrow suspension bridge. Congestion improved when a new road bridge was built in 1958 and this is the dramatic entrance to Conwy. Now traffic completely bypasses the town through the tunnel.

This is a shame as Conwy is one of the best walled towns in Britain and still maintains its medieval street pattern. Small pleasure boats now bob about along the quay. Conwy is a thriving place with a lot of small family owned shops along Castle and High Streets catering for both locals and tourists. We can recommend Edward’s Butchers and Deli on High Street adjacent to Plas Mawr. They have a good range of pork pies, sausage rolls and pasties for lunch as well as filled rolls. Alternatively there is Conwy Bakery on Castle Street.

Watch out for seagulls when you eat, as they’ll steal the food from your hands as husband found out after only one bite of his pasty. Alternatively there are plenty of pubs.

Pavements are narrow and there is a one way system in operation round the town. There is short term parking by the castle with long term parks outside the walls.

There is plenty to attract visitors to the town. It is dominated by the castle built on an outcrop of rock overlooking the river. A World Heritage Site, this is one of the great castles built by Edward I to subjugate the Welsh. The inner buildings though roofless, still stand to their original height giving an impression of what the castle must have been like when built. 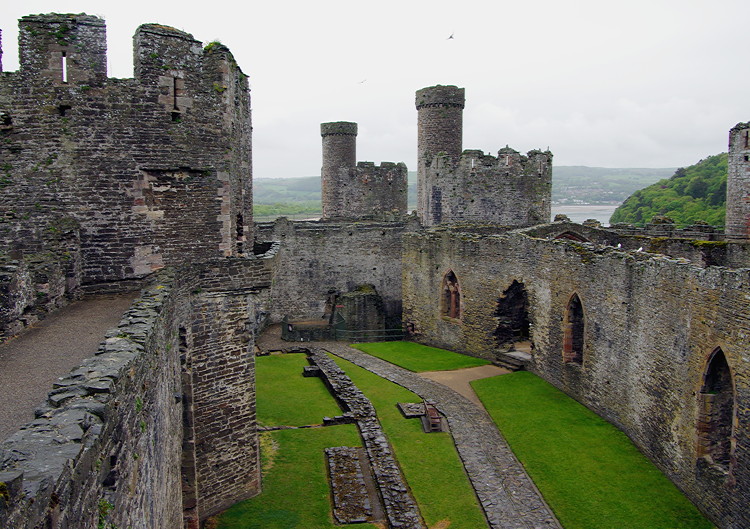 Conwy has a complete set of town walls with twenty one towers, as can be seen on this model inside the castle. Parts of the walls are accessible and make a lovely walk with views of the castle and town. Don’t miss the bank of twelve latrines by the Mill Gate. On Castle Street is Aberconwy House, the oldest house in Conwy, with stone base and timber frame upper storeys. it originally belonged to a wealthy merchant, later becoming coffee shop, bakery and a temperance hotel. Now in the care of the National Trust, it has a NT shop on the ground floor and furnished upper rooms.

Plas Mawr is the splendid large white house on High Street and is one of the best preserved examples of an Elizabethan town house. This was built as a statement of wealth by Robert Wynne and has been beautifully restored by CADW. The internal plasterwork is particularly good. Wynne is buried in the church set in a small graveyard is in the centre of the town. this is kept locked, although a key can be obtained from the vicarage. Conwy is also famous for its three bridges. The first was built by Thomas Telford in 1826 to replace the dangerous ferry crossing. It was one of the first suspension bridges to carry road traffic. The end supporting towers were built to match the towers of the castle. Part of the castle had to be demolished to attach the cables to the rock. 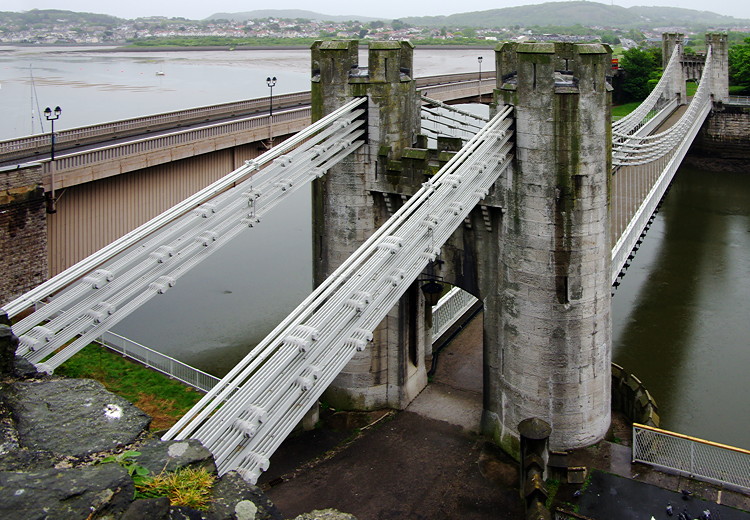 The bridge and the small toll house is now in the care of the National Trust. The toll house has been furnished as it might have been in the C19th and is open for visitors.

Next to the suspension bridge is Stephenson’s railway bridge, opened in 1849. Made of wrought iron, it was the first tubular bridge to be built and the only surviving example. Following the example of Telford, the ends of the bridge were designed to look like castle keeps. Trains still use the bridge, although it has had to be reinforced with extra pillars beneath the bridge. The 1958 road bridge is an elegant example of a bridge typical of its time.

It is quite easy to spend a whole day in Conwy. As well as the above attractions, there is the Royal Cambrian Academy of Art, an art gallery with a changing series of exhibitions during the year.

On the quayside is the smallest house in Britain, unmissable with its red paint and a poplar photo shot for tourists. The house was lived in until 1900 and the last inhabitant was local fisherman Robert Jones who was 6’3” tall.

For those wanting a longer walk, there is always the walk up Conwy Mountain.

And when you have exhausted the delights of Conwy, there is the Victorian sea side town of Llandudno to explore...

The short term car parks only allow four hours with no return within an hour. If intending to visit most of the attractions, it makes sense to use on of the long stay car parks.
Last edited by a moderator: Feb 17, 2021
Click to expand...

We enjoyed our visit here very much! July, 2016 Great pictures. Do you know why the Welsh Dragon flag was flying at half mast?

I love Conwy. I first visited the castle nearly 60 years ago and fell in love with it. To a young child walking into it, you could still imagine it was still lived in. There is still the same sense of excitement even now each time I visit...
http://wasleys.org.uk/eleanor/index.html

Hmmm...I do not remember why the flag was hanging half mast. Something is “nibbling” at my memory, but I just cannot pull it up. My husband may remember...I can ask him when he gets home tonight.
We loved the Welsh castles...especially Conwy and Caerphilly Castle. My husband is fascinated by castles...I cannot even count how many we stopped to see during our 12 day visit.

There are some wonderful castles in Wales. I also like Caerphilly and particularly its leaning tower which defied the Cromwell army's attempts to blow it up.

Have you visited Beaumaris with its moat and possibly the best example of a concentric castle?

The best web site for people wanting to visit the Welsh Castles is this one. It has information and pictures on every Welsh Castle from splendid ones like Conwy to those that are just a mound in the ground....
http://wasleys.org.uk/eleanor/index.html

We have not been to Beaumaris, but I will make a note of that one for a future trip. We did cross over the bridge, but only visited the small town with the longest name...Llanfairpwllgwyngyll. My cousin and her husband from Llanelli were driving that day, so we just let them decide on the stops. I am not sure when we will get back to Wales. We will be in Oxford in October (our daughter’s British wedding reception...her fiancé is from Oxford) and London, but will not get to Wales this trip...all my Welsh relatives are coming to Oxford for the reception. But when we do go back, your suggestions will be great to have!
Is the website you referred to the one at the bottom of your post?

Stupid me, I forgot to add the link to Castles of Wales website. Thank you for pointing that out.

There are a very few Welsh Castles on my website (most of the ones we visited were in pre digital times and I don't have pictures). It covers castles, stately homes, gardens and churches across England, Wales and Scotland. it is very much a work in progress and each time I visit somewhere new with the camera I add another page.

Llanfair PG (the shortened and more easily remembered and pronounced name for Llanfairpwllgwyngyllgogerychwyrndrobwllllantysiliogogogoch ) is actually a Victorian con...The name was invented for promotional purposes in the 1860s to encourage visitors. Beddgelert and the legend of Gelert date from the same time, being invented by the landlord of the Goat Hotel to encourage visitors.

Llanfair PG is the longest place name in Europe. Like many Welsh place names it is descriptive. In this case "Saint Mary's Church in the hollow of the white hazel near the rapid whirlpool and the Church of Saint Tysilio of the red cave".
http://wasleys.org.uk/eleanor/index.html

Oh, lovely...it is wonderful to have that link! And interesting tidbit about the origination of that town’s name. My cousin and her husband are Welsh speaking...they only speak Welsh among themselves and their family. Sometimes when driving, we would be talking and they would revert to Welsh without thinking! They attempted to teach me a few Welsh phrases, but I seriously could not get my tongue around the words. Even the road signs threw me on occasion when we were driving and I tried to tell my husband where to turn. See a screenshot I took of our Garmin! I just told him to take Exit 16A! 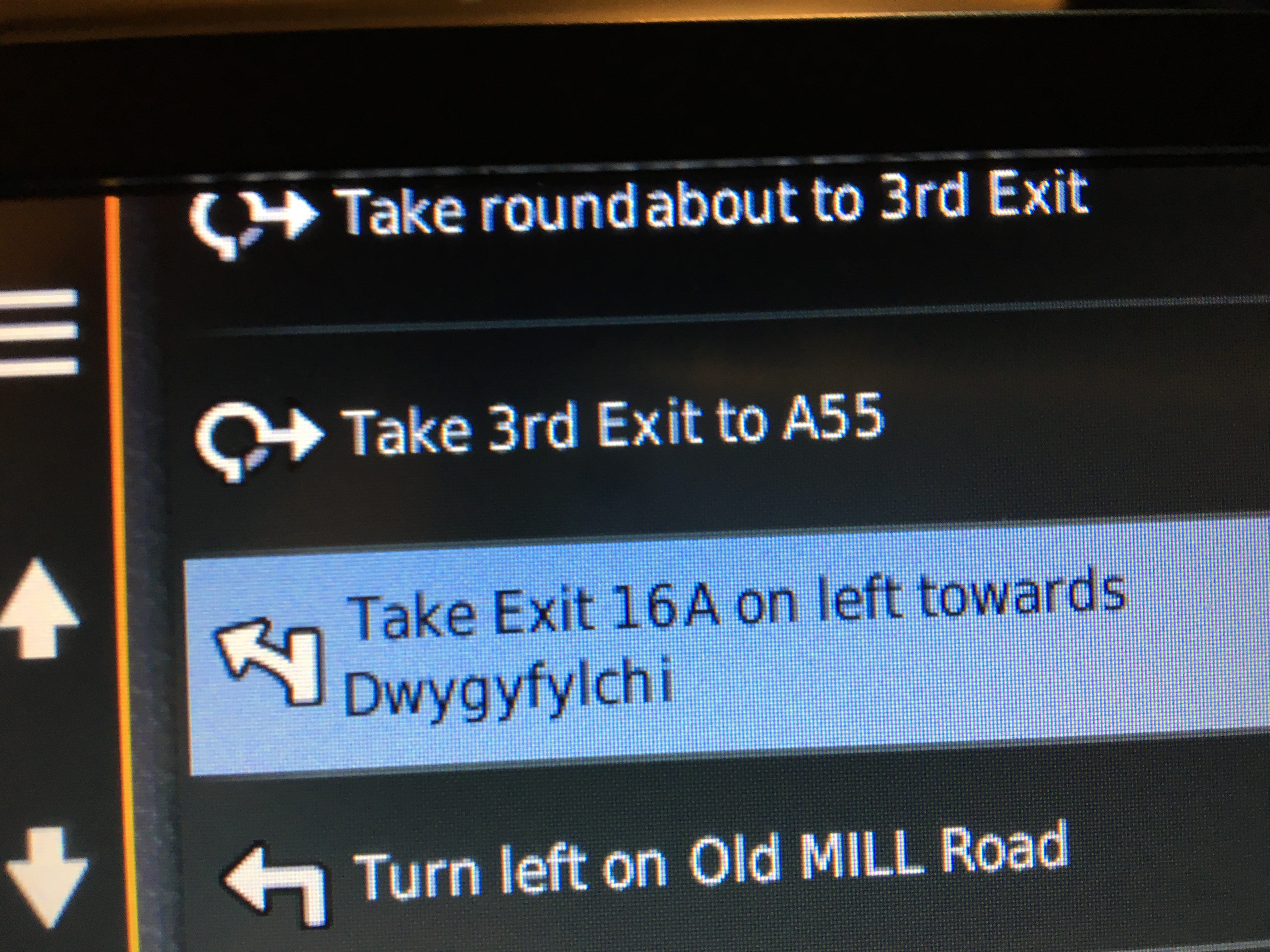