Worts, worms and plain British spirit - a trip round an old distillery


North east Scotland is big whisky country and there are dozens of distilleries. Some like Glenfiddich are well known names. Others are smaller and produce whisky for the named blends. Many offer tours.

Dallas Ddu Distillery is different as it is closed and no longer distils. Now owned by Historic Scotland, it is possible to wander round by yourself with the audio guide, take photographs and get into places not normally visible on the guided tours. 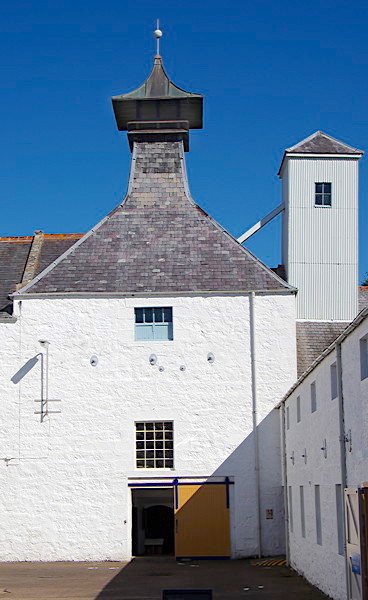 The distillery was built in 1898/9 to supply malt whisky for the Roderick Dhu blend. With its pagoda roof, it was typical of the many small distilleries being built at the time. It changed hands several times during its history before finally closing in 1983, when a prolonged drought caused water supply problems.

It employed around 15 men, including maltmen, mashmen, stillmen, warehousemen and the cooper. The men were expected to turn their hand to anything from unloading barley and shovelling peat to rolling out the barrels. An exciseman was employed by Customs and Excise not the distillery, although the latter had to provide him with a house and office.

Dallas Dhu is signed out of Forres, down a pleasant country lane and is an attractive place of whitewashed buildings with slate roofs, surrounded by trees. It has a large car park indicating it is popular with visitors but there were few around when we visited.

There are information boards around the site and white or yellow footsteps to follow, as well as an audio guide. The distillery grew over the years and the visit involves a lot of backtracking. 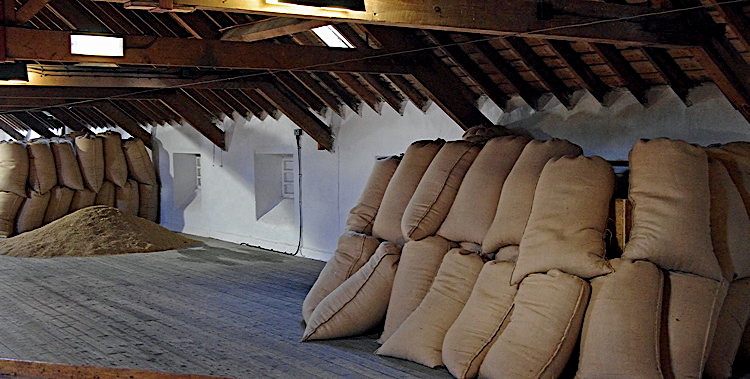 The BARLEY LOFT is a long building with a wood beam roof. Barley in sacks was brought in by rail or road and was stored here in heaps. Openings in the floor led to a conveyor and hoist which took the grain to a dressing machine on the malting floor which removed impurities and the outer husk. It was then taken back to the barley loft and put into two large steel tanks at the end of the shed, where it was soaked for sixty hours to begin germination. 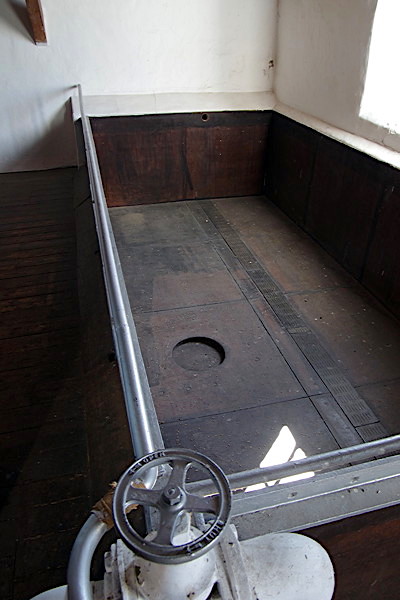 The grain was then shovelled through doors in the bottom of the tanks to the MALTING FLOOR below. The soaked barley was spread out and left to sprout. Raking and shovelling helped break up the grain and aerate it. This process took a week and starches began to break down into sugars. The grain was now referred to as green malt. Two elevators with chains and buckets took the green malt to the DRYING KILN in an adjacent building. The green malt was tipped from the elevator and down a pipe in the roof of the kiln and onto the drying floor. A fire of peat or coke was used to dry the grain and the moist air escaped through the ventilators in the pagoda roof above. Dampers controlled the temperature and a deflector above the drying floor helped spread out the hot air. There is a walkway round the kiln and peat and coke was stored next to it. 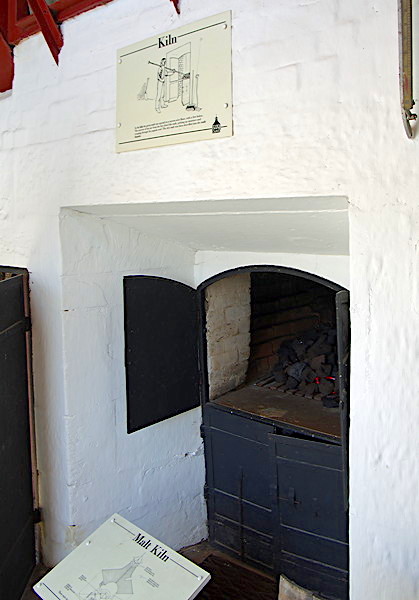 Next door is the METER ROOM with the electrical controls for the distillery. This was originally the stationery steam engine house in the days when steam power was used to drive the machinery. Next to this is the MILL ROOM. The dried malt was weighed and then crushed between steam rollers to form grist. This was raised by another elevator to the top of the MASH HOUSE which contains a large copper tun. Grist and water were mixed in this to complete the conversion of starch to sugars. The spent husks were rinsed twice with water to remove all traces of sugars. The husks were removed through the bottom of the mash tun and were sold to local farmers as cattle feed.

The hot sweet liquid, known as worts, was pumped through a COOLER made of metal plates. Once cool, it was put into wooden vessels in the TUN ROOM. This has six big wooden wash backs which held about 3900 gallons each. Yeast from the yeast store was mixed with warm water in a stainless steel tank before being pumped into the the cooled worts to start fermentation. Alcohol and carbon dioxide were produced and the surface became very frothy. Fermentation stopped after two days and the alcoholic liquid, the wash, was ready to distill. A stationery boiler produced steam to heat the stills. The alcoholic wash was pumped into the first still or wash charger and was heated. The vapour of alcohol and water produced was cooled by passing through spiral copper pipes called the worm, in a large wooden vat of cold water outside the still room. The resulting product called ‘low wines’ was collected in a tank in the receiver room. It was then pumped into the second still and was distilled a second time. The first and last distillates were collected for redistilling. The rest, the ‘middle cut’ was the potential whisky and was known as ‘Plain British Spirits’. This was collected in another vat in the receiving room. In the RECEIVING ROOM is the spirit safe. The still man could test the percentage of alcohol in the ‘low wine’ and decide when to stop distilling. From the receiving room the ‘Plain British Spirit’ was pumped into a large wooden vat in the FILLING STORE at the end of the still room. The brewer’s office was in here. The whisky was run into casks. The amount in each was measured and recorded. Two sizes of barrels were used, the hogshead held about 52 gallons and the butt about 110 gallons.

The barrels were then taken to the BONDED WAREHOUSE, a series of long white rectangular buildings. These provided a cool, dark space where the casks were stacked and matured for a minimum of three years. The shop stocks a good range of different whiskies. We weren’t offered and didn’t ask for a free dram. I understand this is a blended whisky as there is very little Dallas Ddu whisky left now and its rarity makes it very expensive.

The post code for Dallas Ddu Distillery is IV36 2RR and the grid reference is NJ 035566.