The Dartmouth Steam Railway runs seven miles from Paignton to Kingswear, along the spectacular Torbay coast before crossing the peninsula to follow the River Dart to Kingswear. The line was built by the Dartmouth to Torbay Railway and opened in 1864 serving the holiday resorts of Goodrington Sands and Churston. There was a short branch line from Churston Junction to Brixham. It later became amalgamated into the Great Western Railway and stations are still painted in GWR colours of chocolate and cream.

At Kingswear, it was connected to Dartmouth by a passenger ferry, as the logistics of a building a bridge were too challenging and expensive. Dartmouth Station with its floating landing stage, was the only station on the rail network not to have a railway line. The Brixham branch was closed as part of the Beeching cuts in 1964 as it was mainly seasonal holiday traffic. The line to Kingswear struggled on with the Ministry of Transport proposing closure in 1967. The Dart Valley Light Railway Company, a private heritage company, who run the South Devon Railway between Totnes and Buckfastleigh succeeded in buying the line in 1972. An independent station was built adjacent to the main line station, on the site of the old sidings. The company ran their first trains the following year.

The railway is now run by the Dartmouth Steam Railway and River Boat Company and now run a service from mid February to the end of October with Christmas services from the end of November and December. Unusual for heritage railways, it is a commercial operation and doesn’t rely on volunteer labour, being run entirely by paid staff. As well as owning locos and railway stock, the company also owns a fleet of vessels, including the paddle steamer, Kingswear Castle, that run regular ferry services on the River Dart as well as a regular foot passenger service between Kinsgswear and Dartmouth.

As well as the return ticket between Paignton and Kinsgswear they offer a variety of steam and cruise options. Paignton Station is the operational base with engine shed, watering and coaling facilities. 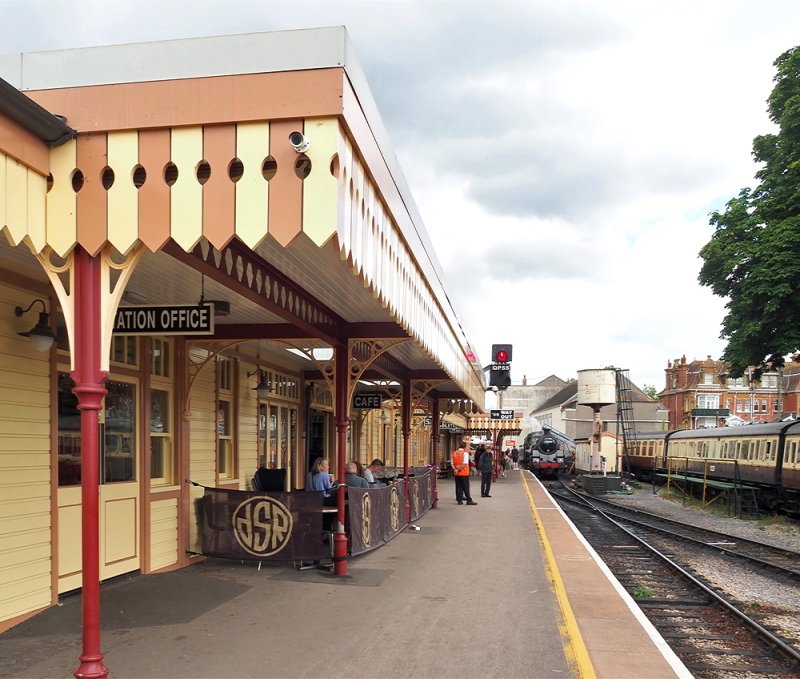 The line passes through the town to the small station at Goodrington Sands. The line runs above the long sandy beach lined with beach huts. The line climbs steeply over the headland with views of Saltern Cove. Rocks are old red sandstone and appear deep red in the sunshine. They also give a brown red sand. There are views across the sweeping expanse of Broadsands Beach as well as views back to Torquay or forward towards Brixham. Churston is the line’s summit and trains pass here. The locomotive workshop is here along with a turntable. Trucks can often be seen in the sidings. The line now begins to drop through fertile farmland to the tiny Greenway Halt used by visitors to Greenway, home of Agatha Christie. After passing through a tunnel and Long Wood, the Railway picks up the River Dart and follows this to the terminus at Kingswear. There are views across the river, busy with boats, to Dartmouth and the Royal Naval College set high above the town. Kingswear is an attractive station with an all over canopy. At the far end of the station is the engine shed and newly purchased loco 3803, awaiting its return to service. The large signal box controls signalling for the line. A passageway leads down to the foot ferry to Dartmouth.
Last edited: Jun 25, 2022
http://wasleys.org.uk/eleanor/index.html

Kingswear is an attractive small settlement on the banks of the River Dart, opposite its larger and better known neighbour, Dartmouth.

Brightly coloured houses spread up the hillside above the river and it is popular with the boating fraternity with a large marina.

Kingswear is connected to Dartmouth by a passenger foot ferry which runs from Kingswear Station to Dartmouth Station (now a restaurtant). Two vehicle ferries run seven days a week all year. The Higher Ferry avoids both town centres. The Lower Ferry runs from a slipway just below Kingswear railway station. This Ferry is unusual as it is operated using a floating platform pushed along by a tug, and the only one of its type. Kingswear Castle near the mouth of the river, was built at the end of the C15th as an artillery fort to protect the harbour from the threat of French invasion. It was one of the first artillery forts to be built in Britain. The river was an important trading and fishing port. A castle had been built on the Dartmouth side of the river and this was built to complement it. Between them they were state of the art defence, with a huge chain laid across the river as an extra deterrent.

Kingswear Castle was armed until the early C18th when it fell into ruin. It has now been restored and is let as a holiday house by Landmark Trust.
Last edited: Jun 25, 2022
http://wasleys.org.uk/eleanor/index.html
You must log in or register to reply here.
Share:
Email Share Link