Elgin Cathedral is a magnificent ruined cathedral in the centre of Elgin. Dating from the C13th, it was built to replace an earlier cathedral near the Bishop’s Palace in Spynie. This had once been an important religious community surrounded by a wall with four gateways through it. The Pans Porte on the east side still survives. The cathedral was at the centre of the complex. All of the church dignitaries had a manse in the precinct surrounded by a garden. Now the only one to survive is across the road from the cathedral. Often wrongly called the Bishop’s House, it was the Precentor’s manse. The cathedral was built at the end of the C13th. It was damaged by a fire in the late C14th after being attacked by Alexander Stewart, the Wolf of Badenoch. It was rebuilt and extended in the C15th and C16th. The cathedral was abandoned after the Reformation as the congregation moved to the parish church of St Giles. The lead was striped from the roof, the bells removed and much of the interior was robbed for building stone. The Chapter House survived as it was used as a meeting place by the townsfolk. The central tower collapsed on Easter day in 1711, demolishing much of the nave.

In the C19th, the site was cleared up and stabilised. The south choir was reroofed in the C20th. It is now in the care of Historic Environment Scotland.

It is possible to see most of the outside of the building, including the splendid west doorway, from outside the railings. It is however worth paying to go into the site as there is a lot of detail to see as well

The double west towers still stand to nearly their original height. At the base is an elaborate double doorway with carved pointed arches set in a larger archway of pillars and pointed arches. 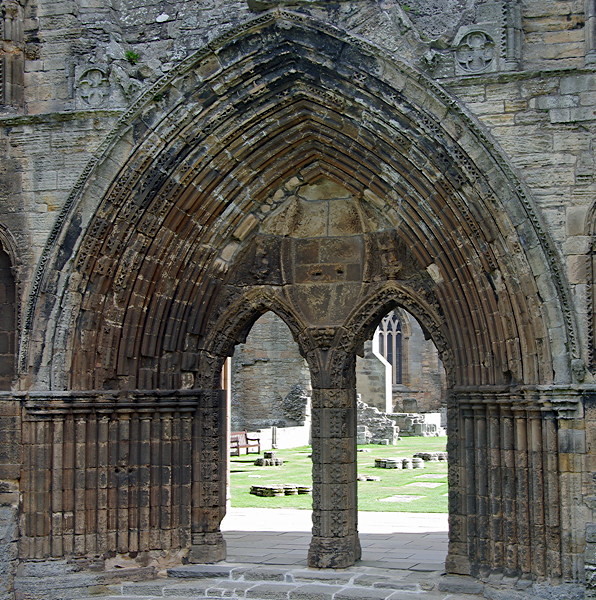 There is a small exhibition in the south west tower about Elgin cathedral. A spiral staircase leads to the top of the tower. It is worth climbing just for the view.

Inside there is little left of the nave apart from two windows on the south wall and part of the south transept beyond. There are a few old tomb slabs set in the grass and the bases of the central pillars.

The splendid east end with choir still stands to nearly its full height with two rows of tall thin lancet windows and a blank round window above. On the south side is a vaulted aisle. The north aisle is roofless with the chapter house off it. Nothing is left of the cloisters. On the west wall of the south transept are the remains of three carvings of bishops. There are two wall tombs under ogee arches with the carving of a knight and remains of arcading on the walls. In the north transept, there are another two wall tombs; one with a carving of a knight, the other with a bishop. On the west wall is a small square stone with an inscription with two small shields with a grinning face between them.

The large choir has the remains of a sedillia on the south wall. On the north wall is the remains of the tomb of Bishop Archibald which may also have doubled up as an Easter Sepulchre, which held the host between Good Friday and Easter morning. The walkways round the top of the walls is still visible, with open pointed arches with cross carvings between the pillars. On the floor are more old grave slabs.

There are more old grave slabs in the south aisle, many with coats of arms and skull and cross bones. There are two free standing tombs. One has a knight in armour with his sword at his side. The second is a now headless bishop. On the north wall are two wall tombs under ogee arches with carvings of bishops. On the south wall is a monument to Henrietta, Duchess of Gordon 1682-1710 who was married to Alexander, Marquis of Huntley of Huntly Castle, and bore him five sons and seven daughters. Below the inscription is a lion. At the top is a cameo of Henrietta held by a young boy and a coat of arms.

The octagonal chapter house off the north aisle has a central pillar with small shields carved round the top. This supports a complicated vaulted ceiling with carved bosses. Round the walls is a stone bench. There are old memorials on the walls between the pillars, many with lain inscriptions. 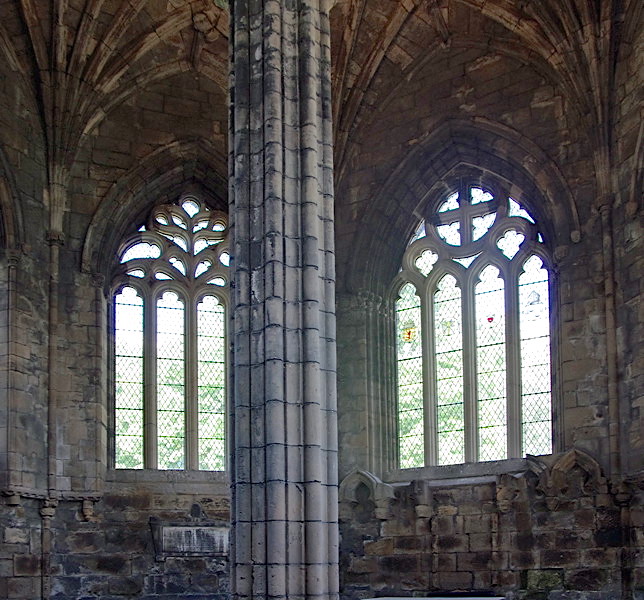 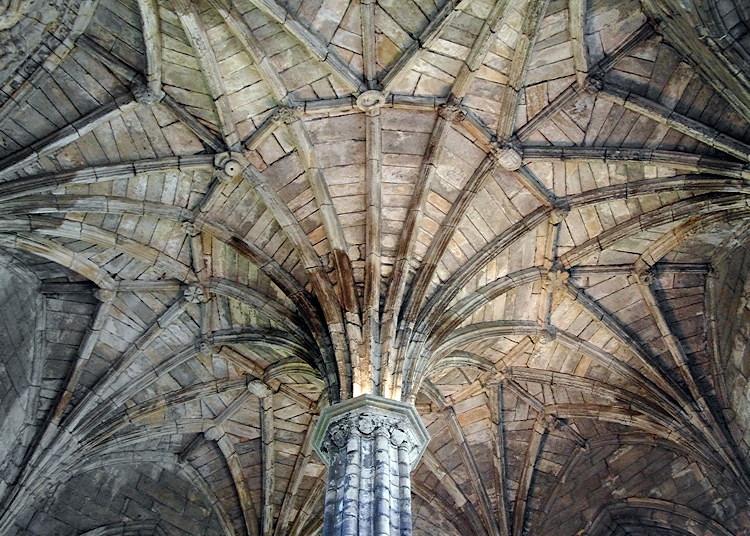 It is worth spending time in here and looking as there is a lot of detail from flower heads carved round the door arch to tiny heads at the base of the window arches. And finally, don't miss the Pictish cross slab stone, standing in the nave near the north transept. The front has a small Celtic cross with the remains of figures round it. At the base are four entwined serpents. On the back is a double dic with a Z-rod. below is an engraved crescent with a V-rod. Below this is a hunting scene with men on horseback, although this is now badly eroded and it is difficult to make out detail.