One of the largest Cistercian abbeys in Britain

Fountains Abbey is one of the largest and best preserved of the ruined Cistercian Abbeys in England, and a World Heritage site. 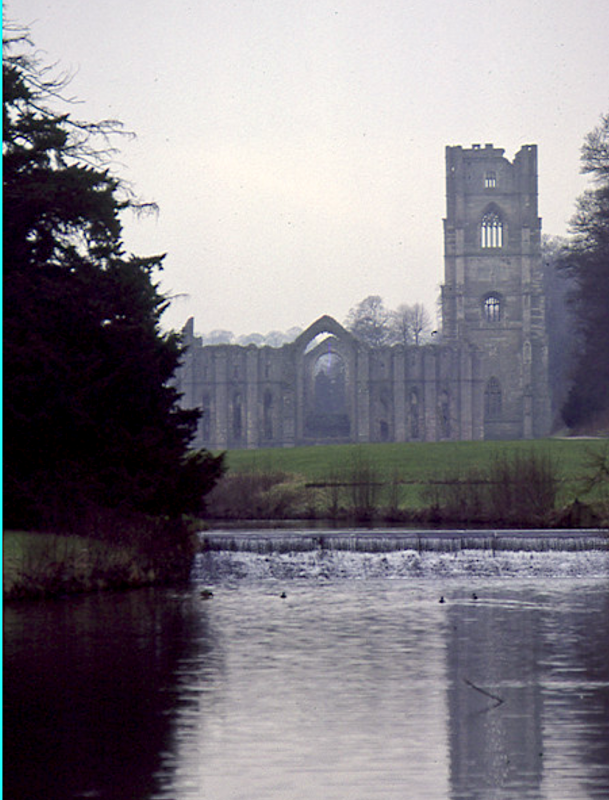 It was founded in 1132 on the banks of the River Skell, by a small group of Benedictine Monks from St Mary’s Abbey in York, who were wanting to live a devote and simple life. It was an ideal site with in a sheltered valley with a supply of timber and stone for building and abundant springs. Within three years it became a Cistercian Monastery and the centre of missionary work in the north of England. Lay brothers performed the routine jobs around the monastery allowing the monks to dedicate their lives to the service of God.

Fountains Abbey became one of the great Yorkshire abbeys owning vast areas of land. Its wealth was based on sheep and lead mining along with cattle rearing, horse breeding and stone quarrying. 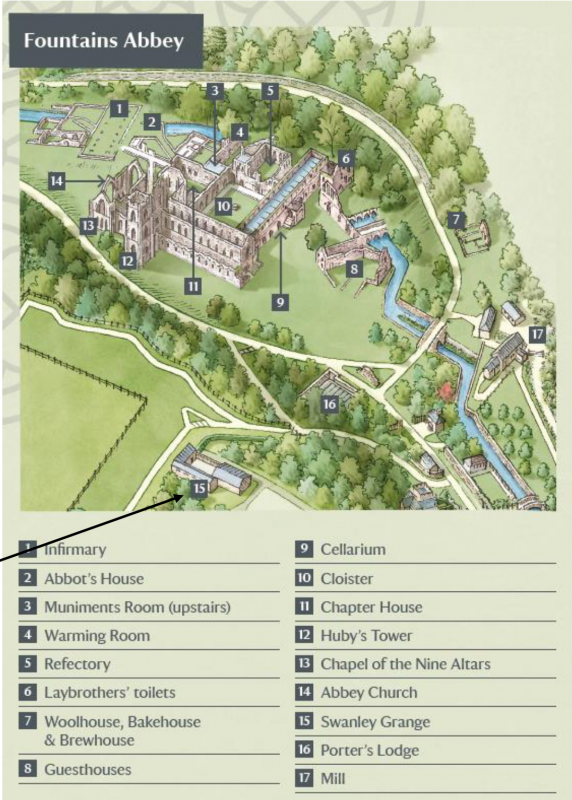 It went through a difficult time in the C14th with as series of bad harvests, the Black Death and increased raids by the Scots. The number of monks declined and abbey granges were farmed by tenant farmers rather than lay brothers.

Fortunes recovered and by the time of the Dissolution of the Monasteries, Fountains was the richest Cistercian monastery in the country. The abbey was dissolved in 1539 and the monks were dismissed with pensions. The estate was sold to a wealthy merchant, Sir Richard Gresham and remained in private hands until the 1960s when it passed to West Riding County council and then the National Trust.

Most of the buildings date from the C12th. The nave is C12 with sturdy round pillars and round arches and still stands to its full height. 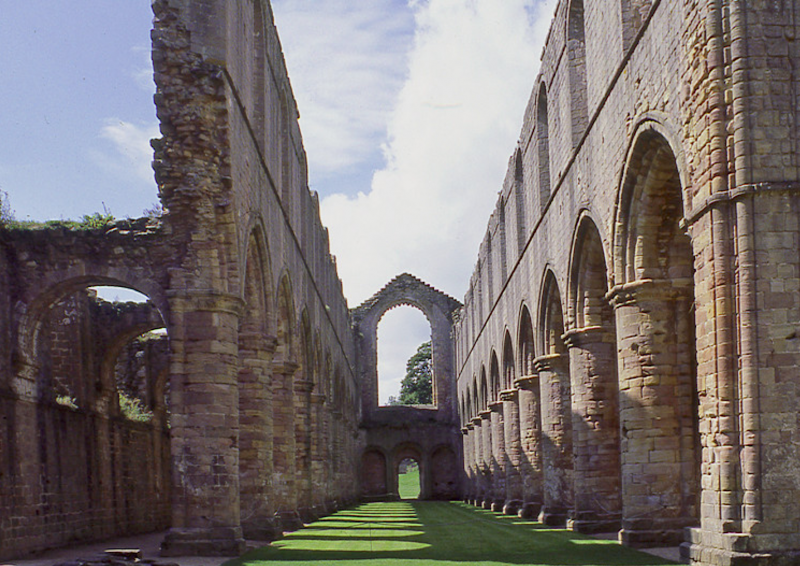 It is flanked by side aisles. The roof has gone, but the ribs of the vaults survive. 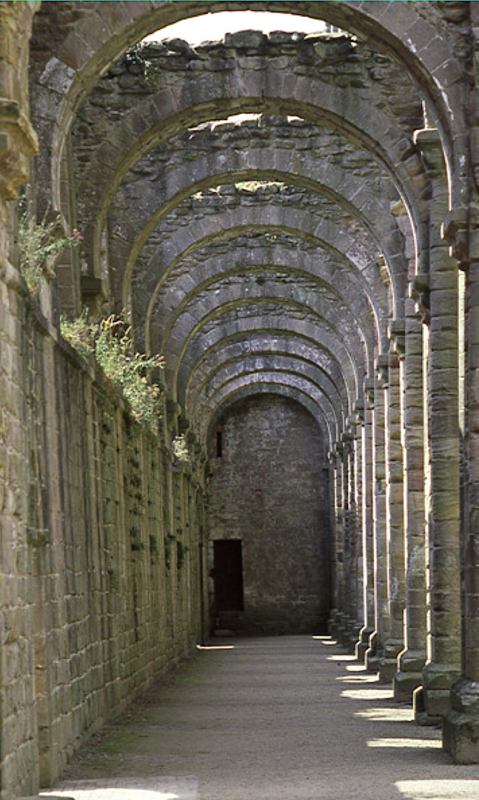 The Abbey church was enlarged in the C13th during a massive building programme.The tower over the north transept, dates from the C15th, and is a very different style of architecture to the nave. 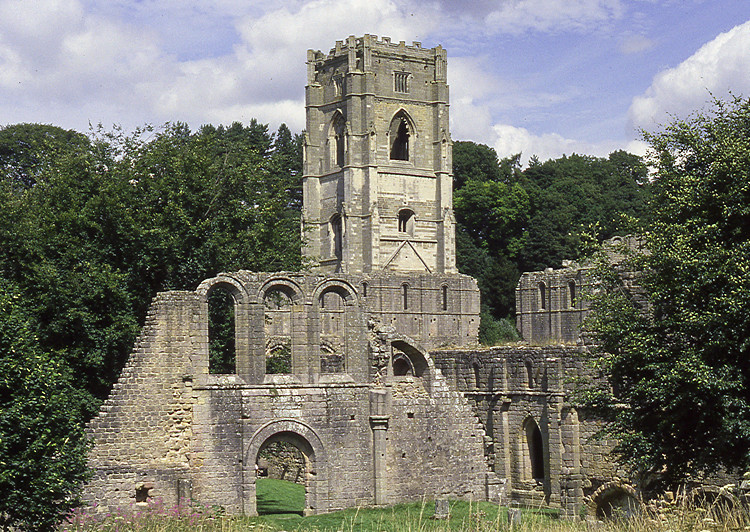 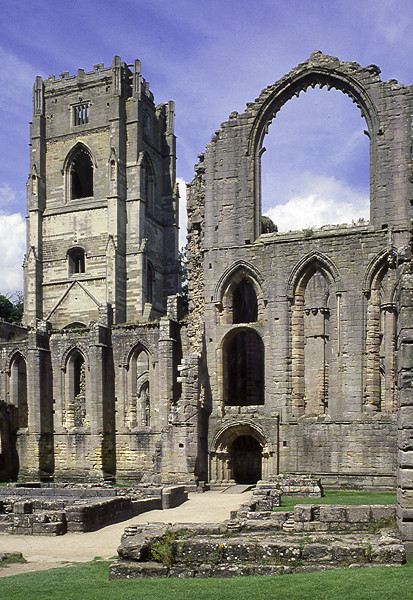 Most of the rest of the buildings survive as low walls, apart from the undercroft or cellarium. 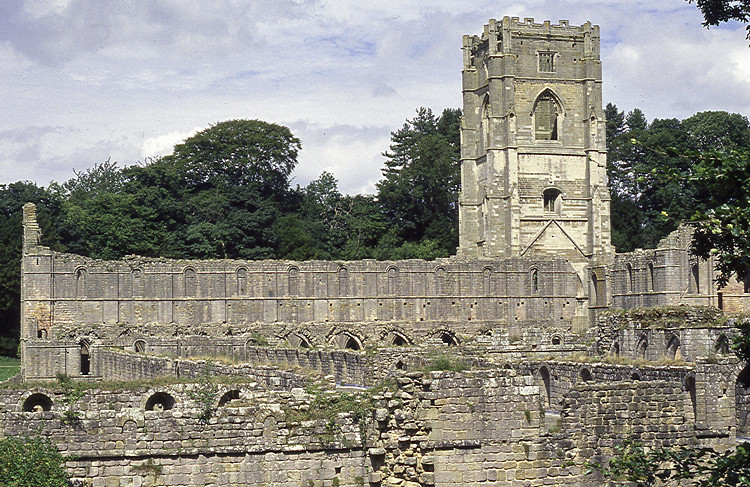 The vaulted undercroft supported by a central row of columns was used for storage at the north end. It’s size reflects the importance of the abbey. Thirteen tons of wool were produced each year. Most of it was sold to Venetian and Florentine merchants. Above would have been the lay brothers dormitory. 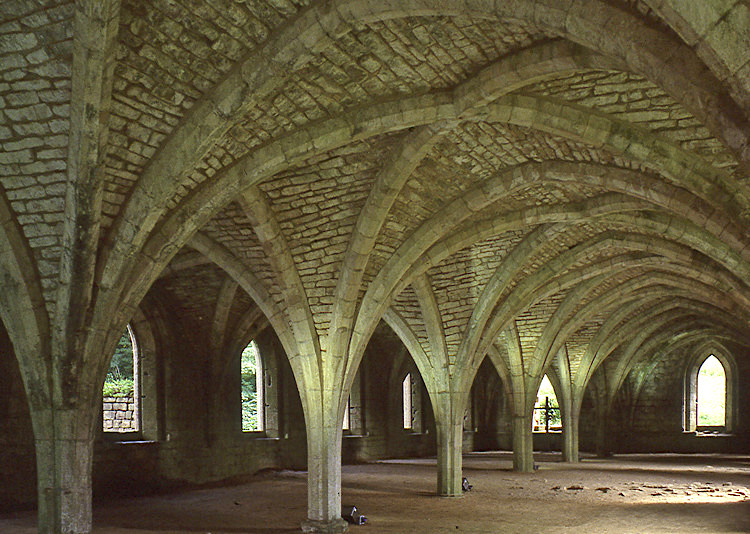 Fountains Mill dates from the C12th and is one of the oldest buildings on the estate, grinding grain for the abbey. It survived the dissolution of the monastery and was in continuous use until 1927. It was completely restored in 2001.

Fountains Hall is typical Tudor building, constructed using stone from the abbey ruins at the end of the C16th. this is now in the care of the National Trust and has an exhibition about the site as well as holiday flats. 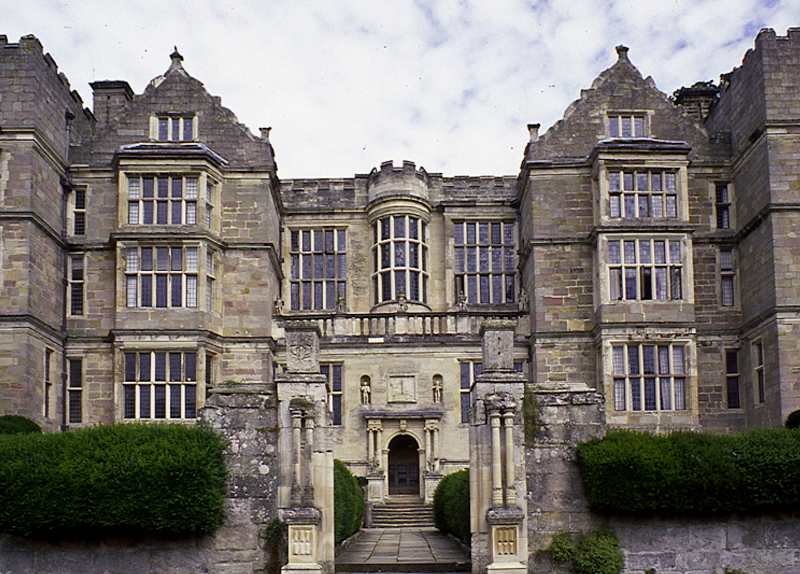 In the C18th, John Aislabie inherited the Studley Royal Estate and turned the wooded valley of the River Skell and the ruins of Fountains Abbey into a spectacular Georgian Water Gardens, with lakes, classical statues banqueting houses and and follies. The deer park is unchanged since medieval times and is still grazed by herds of red, fallow and sika deer. Nothing remains of Studley Royal House, the Medieval manor House which stood in the deer park. St Mary’s Church in the deer park is Victorian and the work of William Burgess. It is in the care of English Heritage.

There is a series of walks taking visitors round the grounds. This is probably the best walk for those wanting to learn about the development of the estate and its significant landmarks.

Fountains Abbey is in the care of the National Trust and there is a large and impressive visitor centre with a restaurant. There is also a tea room by the lake and a cafe in the mill.