Huntly is a very nice Scottish Town which has has maintained a range of small family owned shops. The dark grey stone houses are neat and well cared for. Dean’s Shortbread have their factory in the centre of the town with a viewing platform, good shop and excellent cafe.

The castle is to the north of the town, surrounded by trees with glimpses of the River Deveron glittering a deep blue in the sunlight below, and with views across to the distant heather covered hills. It is reached through a splendid archway with a clock tower and along a tree lined avenue. 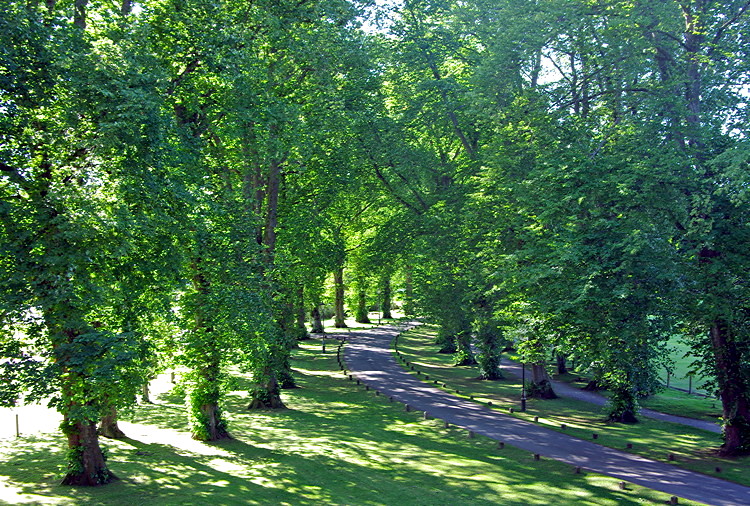 There has been a castle here since the C12th and the original grass covered motte can be seen next to the castle. This guarded the strategic crossing point where the Rivers Bogie and Deveron met and would have had a wooden tower with a palisade around it. This was replaced in the C15th by a stone tower house but this was burnt down during power struggles between the Gordons and the Black Douglases. Only the foundations remain. The castle was rebuilt and extended in 1550 by George Gordon, Earl of Huntly, who was Chancellor of Scotland and one of the wealthiest men in Scotland. The castle was eventually finished in 1606, with separate accommodation blocks for the Earl and his Countess. It was surrounded by formal gardens.

As a statement of power he left his inscription along the windows of the south range. Along the top is carved “George Gordon First Marquis of Huntlie” and below “Henriette Stewart Marquesse of Huntlie”

The second marquis was executed in 1645 for backing the Royalist cause and the castle was uninhabited. It was occupied by government troops during the 1745 Jacobite Rebellion but then fell into disrepair and was used as a source of building stone.

Even though ruined and open to the sky, it is a splendid L shaped building with a tall round tower with adjoining great hall on the south wall. The main entrance is in the east range. Close by are the remains of the medieval road to the castle which was in use until the C17th.

Around the outside of the castle are the grassy banks of the ravelin (detached artillery fortification) built during the Civil War.

A simple round archway leads into the courtyard. All that is left of the C15th castle are the foundations on the north side of the courtyard. This was built on the bailey of the C12th castle. The grassy bank of the motte is beyond. In front are the remains of the C17th stables. Larger cobbles in the floor mark the stalls for the horses which were bred much smaller then. 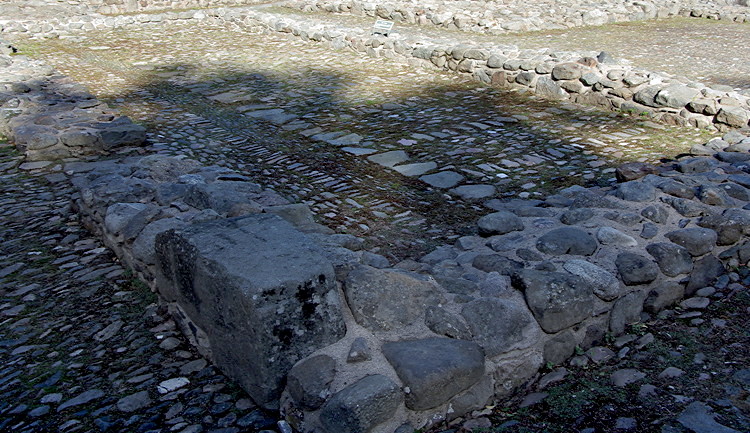 To the north is a square stone building which was the kitchen and brewhouse. Each person ate two large loaves of bread a day made from barley and oats grown on the estate and drank about a gallon of ale a day.

Entry into the 1550 building is through a splendidly carved doorway in a small round tower in the middle of the south range. The square doorway has four small shields carved along the lintel with three deer hounds between them. Above is the coat of arms of George Gordon and his wife Henrietta Stewart. Above that is the Royal Coat of Arms of James VI alongside those of his wife, Anne of Denmark. Above are the initials of James and Anne with the royal crown and crest of Scotland. The panel above had a depiction of the crucifixion with the image of the risen Christ in the roundel above. These were defaced by the Covenanting Army in 1640 as popish imagery. At the top is Archangel Michael triumphing over Satan - the victory of good over evil. Inside the doorway, stone steps lead down into a corridor with three vaulted storage rooms off. At the far end, round a right angle bend, is the pit prison complete with models of two ‘prisoners’. Perspex on the walls protects graffiti scratched in the wall plaster by prison guards.

Inside the doorway, steps lead up to three vaulted ground floor rooms. These were the kitchen, still with its open fire and the servants’ quarters. The room at the far end with a small fireplace and beneath the Earl’s bedroom, was possibly the steward’s room and had a spiral staircase to the upper floors.

A modern spiral staircase leads to the upper floors. The earl had his quarters on the first floor; his wife on the floor above. Each had three rooms and a privy. The main room was the main reception room. Beyond was the great chamber which was more private and only important or privileged guests were allowed in here. Beyond was the bed chamber, in the round tower.

In the Earl’s apartments, fragments of a decorative plaster frieze, protected by perspex, can be seen at the top of the wall of the great hall. There is a superb carved fireplace which is one of the best in Scotland. Supporting the lintel are two knights in chain mail. In the centre of the lintel is a monogram of the initials of George Gordon and Henrietta Stewart. On either side are their coats of arms and their mottos. Above the lintel is a quotation from Romans 8 v 28 “TO THAES THAT LOVE GOD AL THINGIS VIRKIS TO THE BEST”. Above is the Royal Coat of Arms of Scotland from after the Union of the Crowns with the unicorn and a wyvern. The triangular obelisks on either side had the names of George Gordon and Henrietta Stewart carved on them. The defaced panel above the Royal Coat of Arms was probably a religious scene. The staircase continues up to the second floor and wooden galleries allowing access to the rooms. The fireplace is less splendid than that in the Earl’s quarters, with medallions with images of George Gordon and Henrietta Stewart. The shield in the centre had the coat of arms of the respective families and their mottos. The castle is in the care of Historic Environment Scotland.
Click to expand...