Markenfield Hall is a medieval moated manor set in the midst of farmland just to the south of Ripon. Surrounded by C18th agricultural buildings, it is a rare survivor of a C14th building which is still lived in today.

There has been a house on this site since the Domesday Book. The earliest parts of the house date from the C13th with the undercroft and great hall above. The building was extended in the C14th when Henry II granted the Markenfields a licence to crenellate.

The family were Catholics and the Hall was one of the centres for the Rising of the North in 1569 which planned to replace Elizabeth I by Mary Queen of Scots. After the failure of the rising, Sir Thomas escaped to the Low Countries where he died in poverty. The house and estate was confiscated on the grounds of High Treason. The Hall became a tenanted farmhouse with an absentee landlord. The tenants had neither the means or the inclination to modernise or improve the house. It remains as one of the most complete surviving examples of a house of that age.

In 1761, the Hall was bought by Fletcher Norton, a descendant of Sir Thomas, who became Lord Grantley of Markenfield. He never lived in the Hall which was in poor condition and partially open to the elements. He reroofed the Hall and made it water tight, thus saving it from further ruin. It continued as a tenanted farmhouse until the 1980s when the 7th Lord Grantley began a programme of restoration and came to live in the house. His wife remarried after his death and she and her husband have continued the restoration and live in the hall.

The buildings are surrounded by a wall and a moat with ducks and black swans. There is a bridge across to the C16th gatehouse, the only entrance. Through it is the courtyard with the Hall at the far end and a later L-shaped block to the right of it. 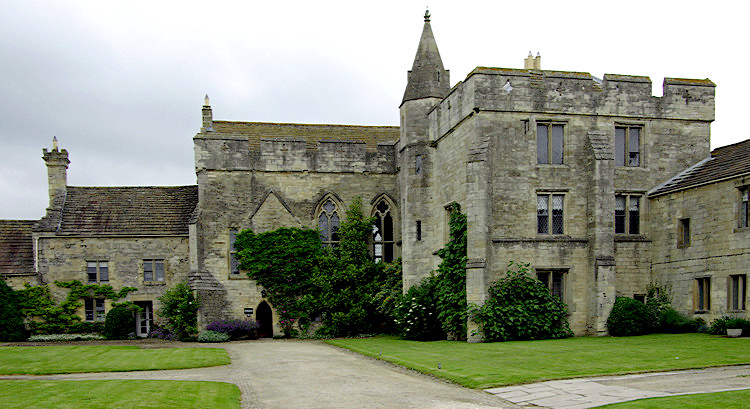 A wooden doorway leads into the UNDERCROFT which had a big log fire burning in the old fashioned cast iron range. This has thick stone walls and stone ceiling. Originally used for storage, this was the tenant farm kitchen. The cast iron range dates from 1840 and was in use until 1950. A doorway in a corner led to the latrine. The undercroft is now used as a reception room with chairs around the fire, wall cupboards and the ticket desk. There are plans of the estate on the walls. Off it is a smaller room, still with its stone vaulted ceiling. It still has a shallow stone sink and is used as a utility room by the family with washing machine, freezers, table and storage space. A doorway, referred to as the Dog’s Entrance, leads into the orchard. Beside it is the huge log store for the fires.

A modern wooden stair case leads up to the first floor. This would originally have been reached by an external staircase. The large room was originally the Great Hall but is now the LIBRARY. There is a small wood burner in the massive fireplace with comfortable settees around it. The bare stone walls are lined with bookcases. These are cleverly designed with night storage heaters hidden behind metal grilles in their base. Family portraits hang on the walls. Through an archway with carved heads at the sides and a heavy wood door, is the CHAPEL. This was built after the undercroft and great hall. Mass would have been said here daily by the resident Chaplain.

The private rooms of the Markenfields were beyond the chapel and there was a squint (now widened to form a narrow doorway) to the right of the altar. The family could hear and see Mass while sitting comfortably beside the fire in their private room.

Near this doorway is a beautifully carved double piscina with the Markenfield coat of arms. The vessels used during mass could be washed in one bowl and the priest’s hands in the other. On the wall is a large portrait of Sir Richard Norton of nearby Norton Conyers, who was standard bearer to the ill fated Rising of the North. Near it is a photograph of the Banner of the Five Wounds of Christ which was the flag used by the Rising. The original is in Arundel Castle. After the Rising, the chapel was disused and was in fact used as a grain store in the C19th. It has been restored and is now back in use, furnished with a simple altar. There is a memorial to the 7th Lord Grantley in one of the arches on the north wall. Although it is still a Catholic Chapel, Anglican services are also held here. The tour ends with the FOUR POSTER BEDROOM, which was originally part of the solar. The fireplace and window seats date from 1310. On the hearth are medieval tiles. The four poster bed with cream drapes is early C19th. Other furniture includes a big wardrobe and chest of drawers. In the walls are china plates with paintings of birds on them. There are also two paintings of a bird in a cage. It is a very ‘lived in’ room with books piled everywhere.

Markenfield is a delightful house. And very much a hidden gem. Check the website for opening times. It is open on selected days between April and October.