Mold is a small and attractive town on the River Alyn , overlooked by the Clwydian Hills. It used to be one of the main routes to North Wales, but is now bypassed. 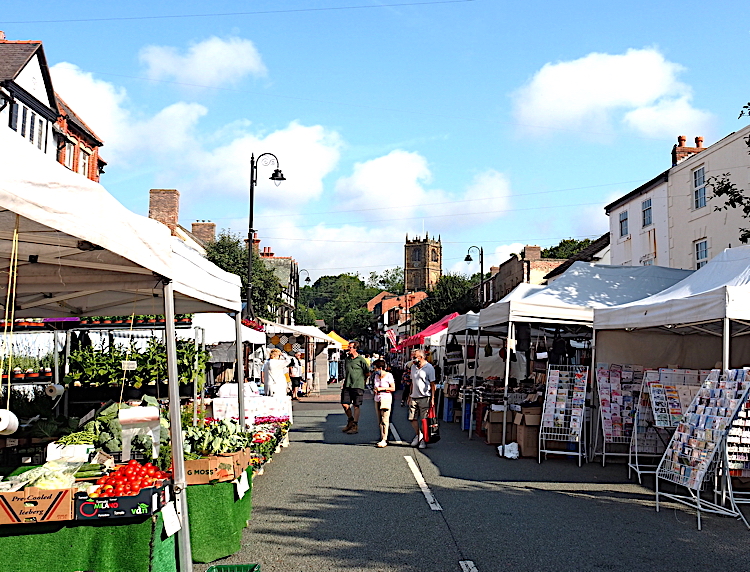 A motte and bailey castle was built here in the late C11th and was one of the early castles built by the Normans to consolidate their hold on Wales. 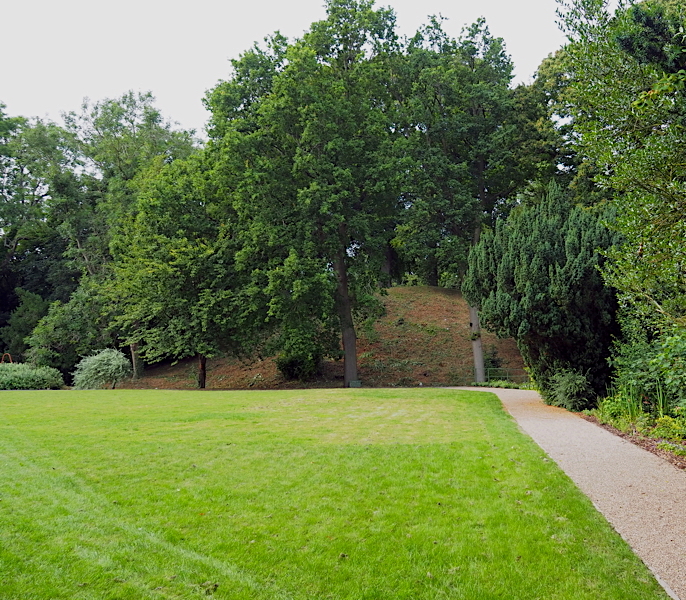 A town grew up round it and the houses round the base of the Castle on Bailey Hill are some of the oldest in Mold. 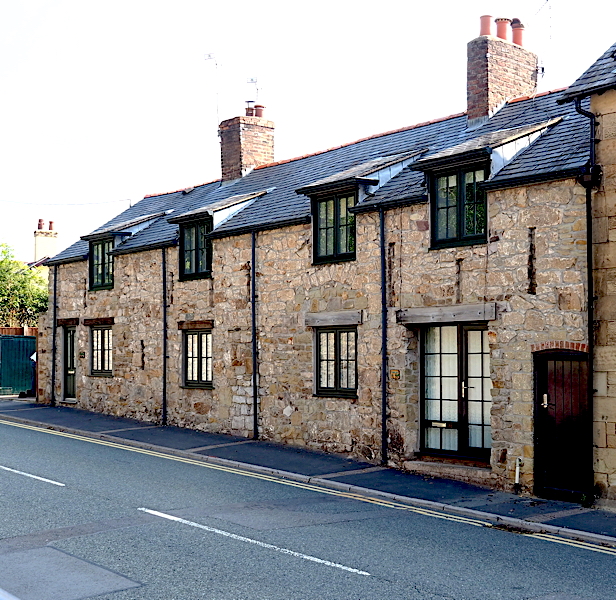 With the end of the Welsh Wars in the C14th, traded grew rapidly between the Welsh and English merchants. The town had a weekly market and two annual fairs. Drovers brought their livestock to be sold here.

By the late C15th the lordship had passed to the powerful Stanley Family and the Parish Church of St Mary was built by Margaret Beaufort, wife of Lord Stanley and mother of Henry Tudor, in thanksgiving for his victory at the Battle of Bosworth. It replaced an earlier church. It took over one hundred years to build and is thought to be one of the finest ecclesiastical buildings in Wales. The tower dates from 1773. The church was restored in the mid C19th by Sir Gilbert Scott. Unfortunately it was locked when I visited as pictures suggest the interior is equally as impressive as the outside. 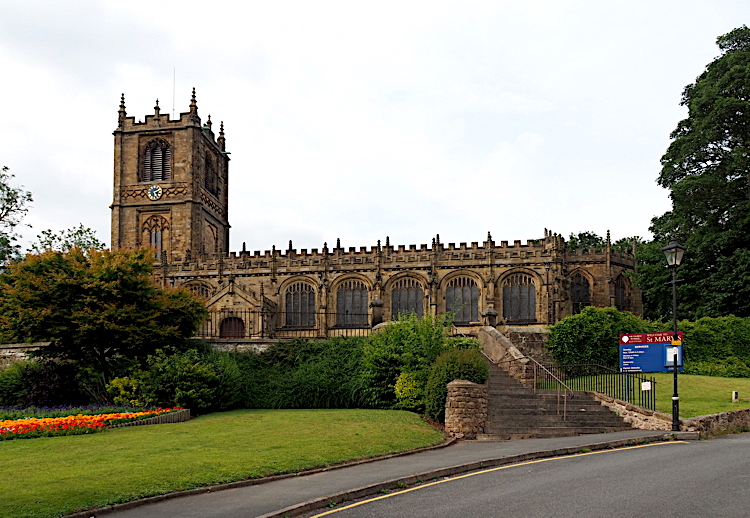 It is still surrounded by a large graveyard. 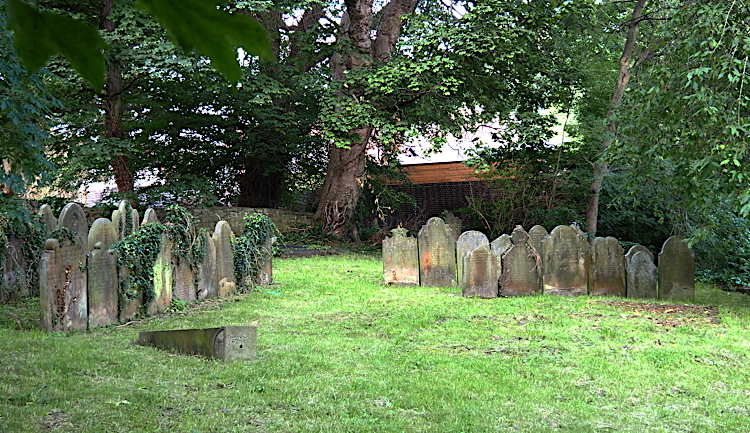 In the churchyard is the Tomb of Richard Wilson, a notable landscape artist, who was a founder of the Royal Academy and influenced both Constable and Turner. 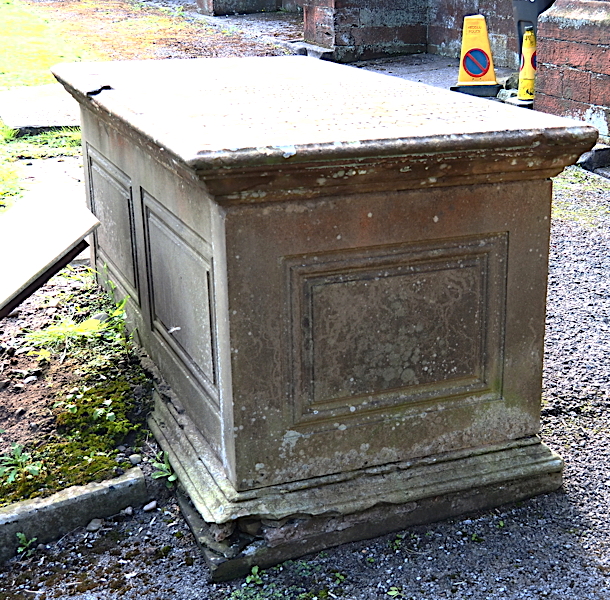 Mold flourished in the C18th with the discovery of coal. It became the administrative centre for the area and the Quarter Sessions were based in the town. The town grew rapidly and many splendid buildings were erected.

Methodism was strong in Wales and over 80% of the population worshipped in non-conformist chapels. The largest was the Bethesda Welsh Presbyterian Chapel on New Street. It is a splendid building with a classical portico with columns. Dating from 1863, it replaced an earlier chapel on the site. School rooms were added to the rear in 1893 as education and particularly biblical knowledge was highly prized. 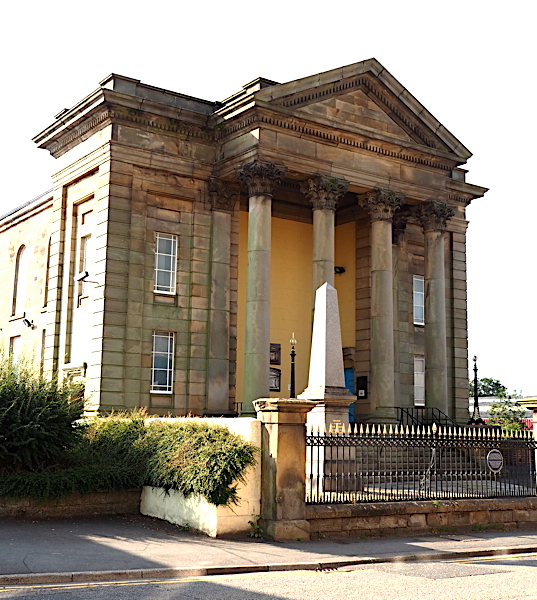 Pendref Welsh Wesleyan Methodist Chapel at the top of High Street is now the King’s Christian Centre. Built in 1827, it is a fine example of Georgian architecture. 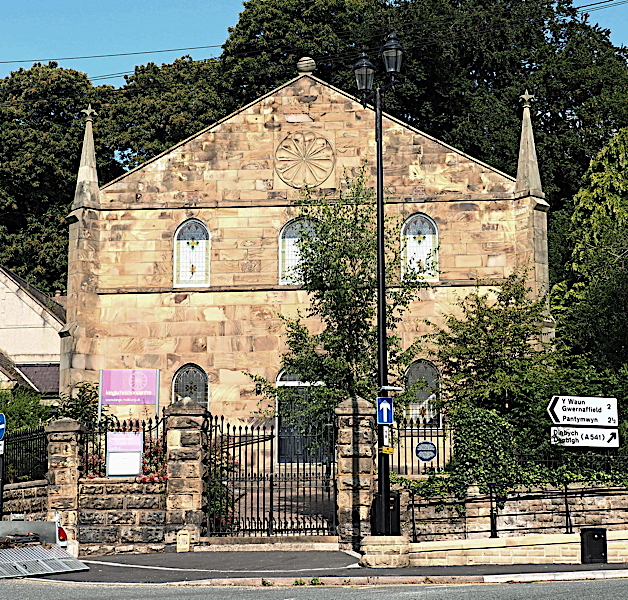 The cross roads in the centre of Mold has always been the focal point of the town. A fountain and clock were erected here in 1864 to commemorate the death of Prince Albert. The fountain was removed in 1884 as it was considered to be a traffic hazard and ‘a resort for idlers’. The clock was moved to the Assembly hall.

Apart from this, the view has hardly changed. High Street and Wrexham Road are still the main shopping streets and it also has an indoor and weekly street market. 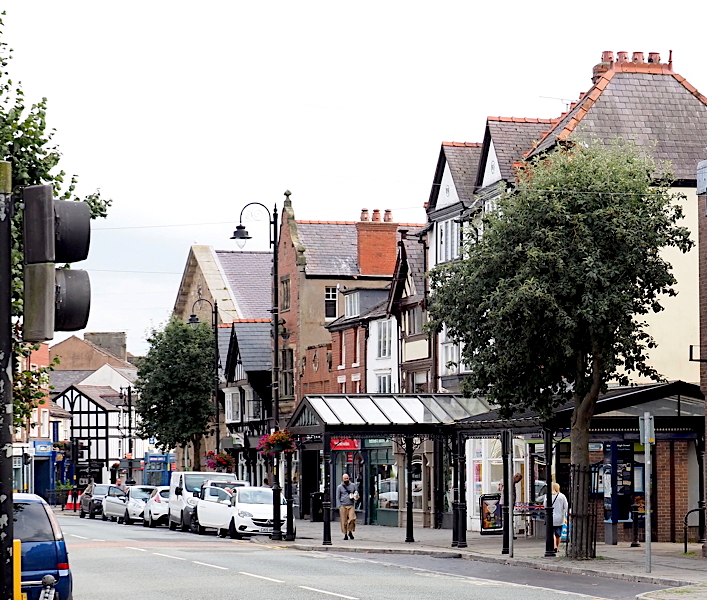 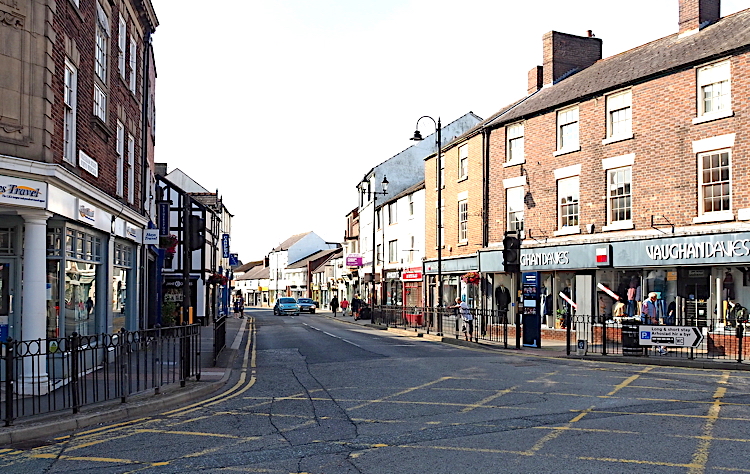 Many of the buildings date from the C19th, and there are examples of wealthy town houses. 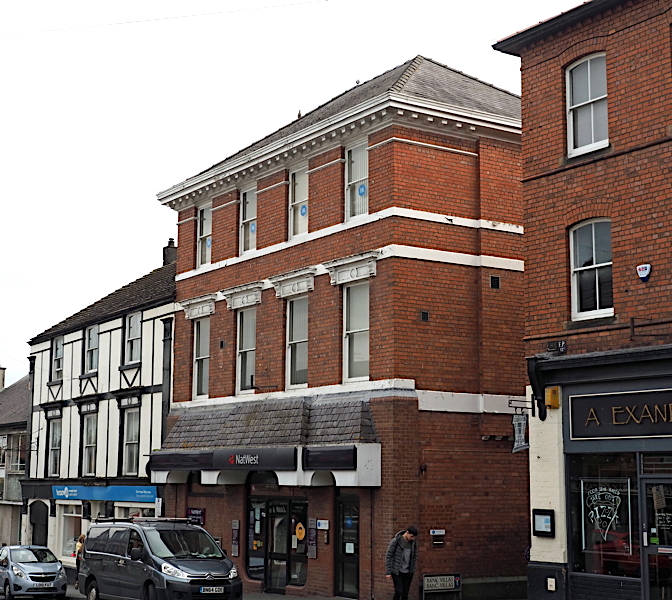 The splendid timber frame Dolphin Pub was built in 1900. 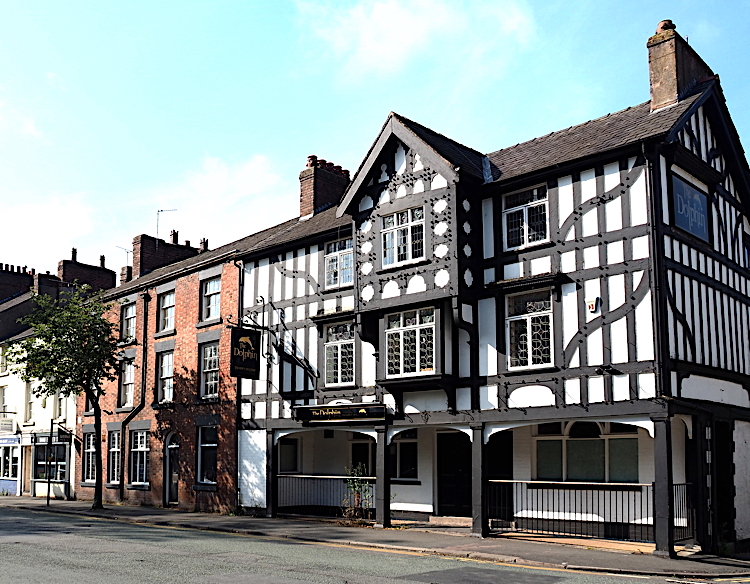 The Old Assembly Hall at the Cross dates from 1849 and replaced the Old Leet’s Hall, where the manorial court was held. This was the focal point of Mold with a an indoor market on the ground floor and rooms for meetings and concerts above. It is now Lloyds Bank. 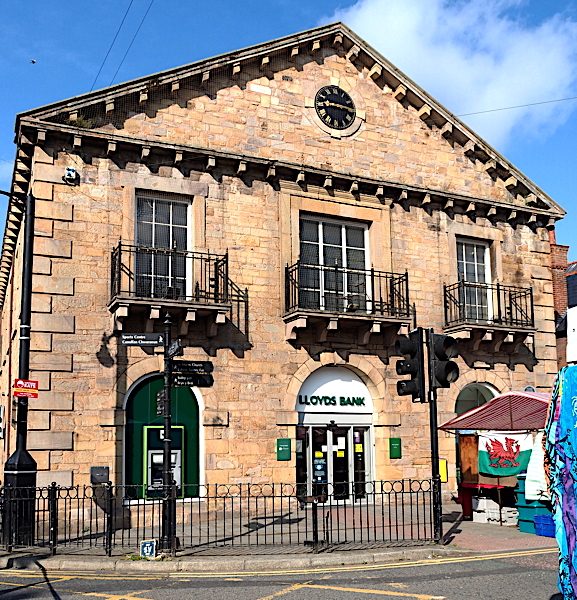 Mold Town Hall on Earl Road was built in 1911 and is a fine example of Neo-baroque architecture. Peter Roberts, a local manufacturer of rubber goods and a pioneer in the development of the pneumatic tyre donated money towards its cost. The massive new County Offices are on the outskirts of Mold. 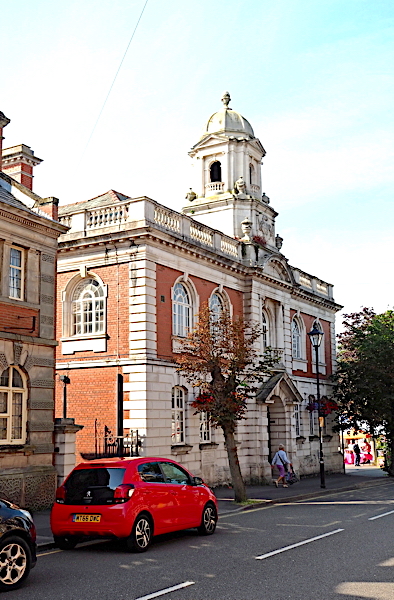 Mold’s most important claim to fame was the discovery of a Bronze Age cape here in 1833 by workman digging a new road. This is the largest piece of prehistoric goldwork found in Britain. It is made from the equivalent of 23 carat gold, weighs one kilogram and was created from a single ingot of gold. It fitted over the shoulders and upper arms and is thought to have been used in religious ceremonies. It has been carefully restored and is now in the British Museum . A replica can be seen in the Mold Museum.

Mold has a vibrant cultural life with many different festivals during the year. Theatr Clwyd on the edge of Mold next to County Hall was built as an Arts and Educational Technology Centre and is now one of Britain's leading regional theatres. As well as hosting visiting companies and artists, it also puts on work all over Wales.

The Clwydian Hills and Dee Valley to the west of Mold are an Area of Outstanding Natural Beauty and are planning to become a Dark Skies Area.

Cars and visitors rushing past on the bypass don’t realise just what they are missing!

Mold still has the largest and best surviving street market in North Wales. On Wednesdays and Saturdays, High Street is full of market stalls. As well as clothes, crockery and other household good, there is a very good butchers, cheese stall, delicatessen, speciality bakers and fruit and vegetables. 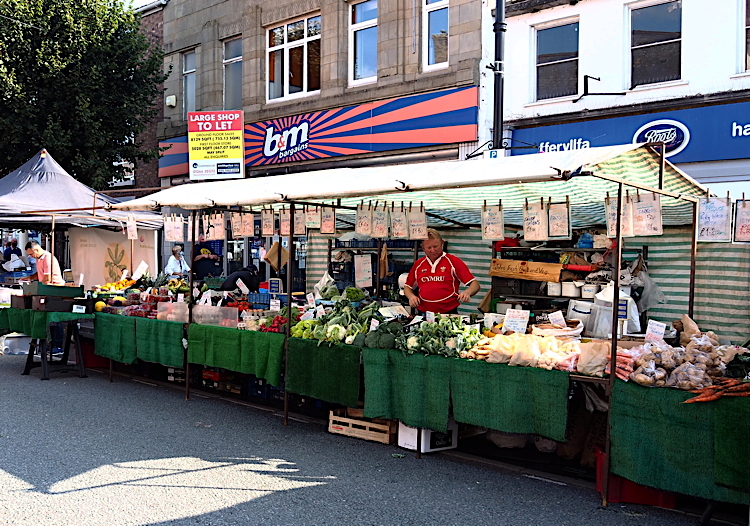 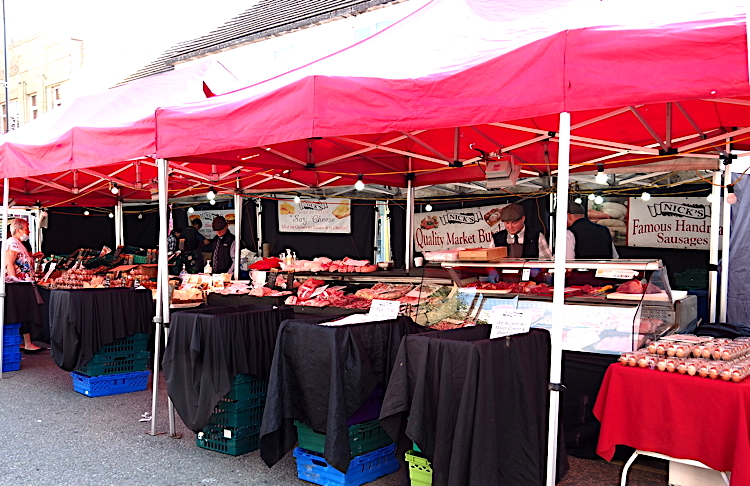 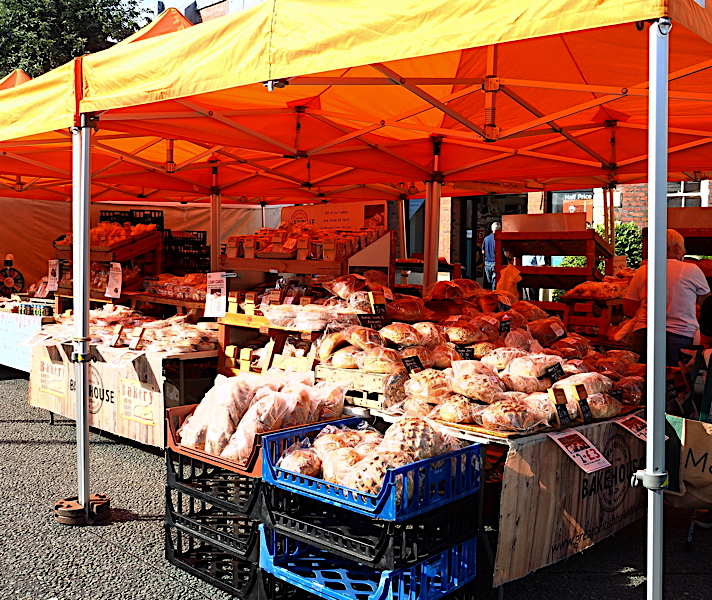 There is even a small ‘overflow’ market in David Owen Square off Earl Road. 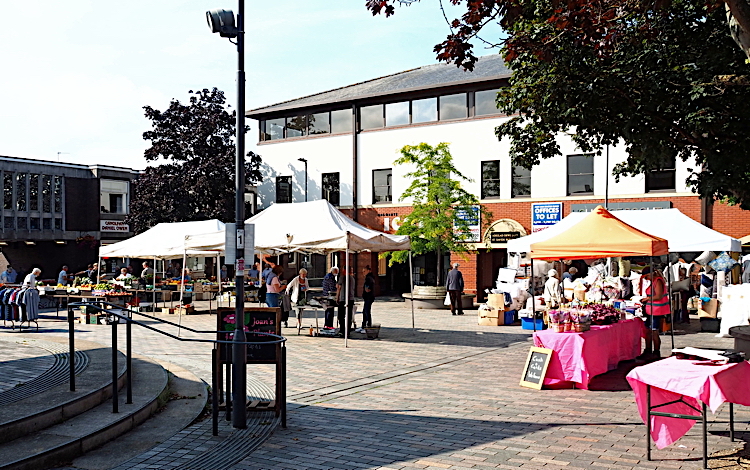 The daily indoor market is close by in the Daniel Owen Precinct and a bi monthly Farmers’ Market in held in St Mary’s Church Hall on King Street. There is also Livestock Market on Mondays and Fridays.
http://wasleys.org.uk/eleanor/index.html

Bailey Hill is a wooded mound at the end of High Street and is the site of a Norman Motte and Bailey Castle.

Dating from around 1100, it was one of the largest castles built in the Alyn valley by the Normans to consolidate their hold on Wales. The motte was constructed on a glacial mound and the flatter areas below it became baileys, or fortified yards. Buildings are thought to have been wood as there is no evidence of stone buildings. 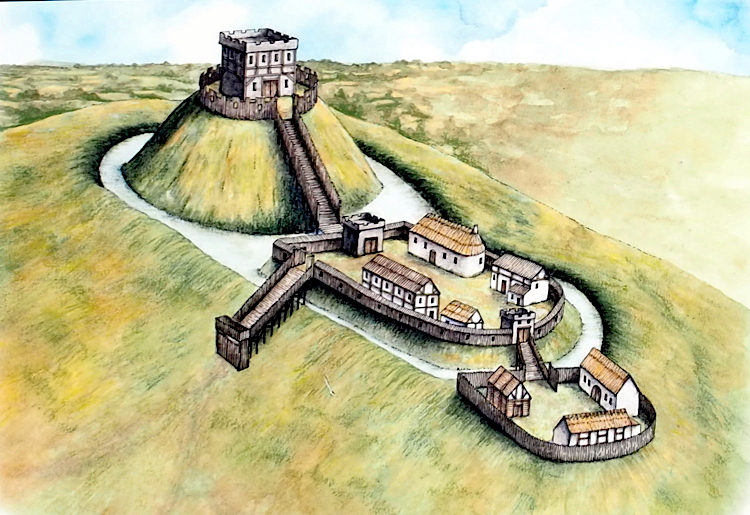 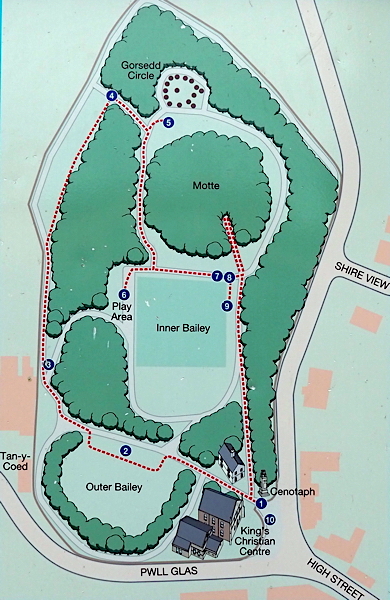 The site changed hands many times as power fluctuated between the Welsh and Norman-English. The castle was no longer needed in the C14th and by the time of the Civil War in the mid C17th , only the abandoned earthworks were left.

The site was purchased by Mold Council in 1870 and turned into a public park, with tennis courts and a bowling green. The area had been getting run down and a Heritage Lottery Fund grant has been used to regenerate Bailey Hill by promoting its historical importance and also as a green space that can be enjoyed by all the community.

Entry is through a splendid double gateway by the war Memorial and there are information boards here. The white cottage had been the custodian’s cottage. 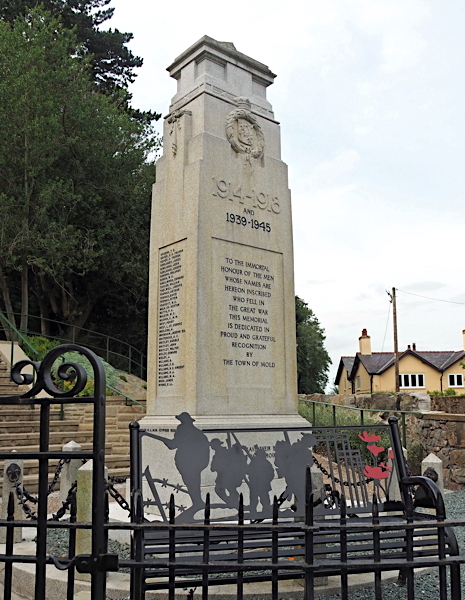 The outer bailey had been used as tennis courts but is now a small green area surrounded by mature trees with glimpses of the Clwydian Hills. 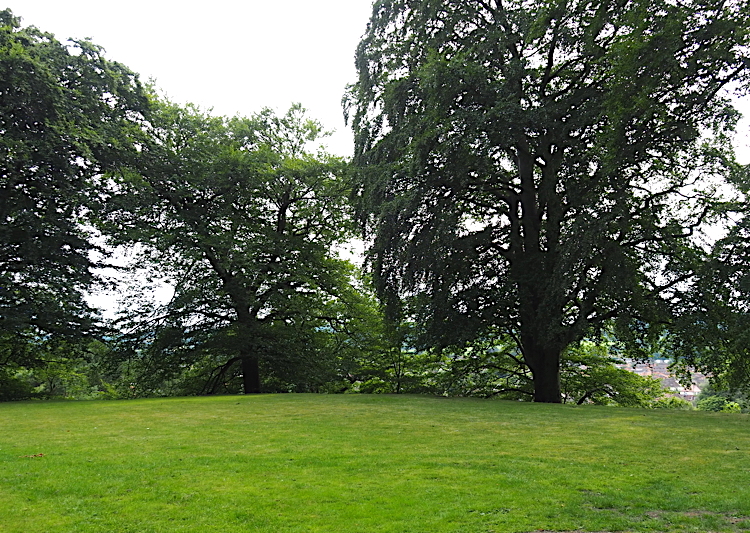 A steep curving path leads up to the middle bailey. This had been levelled and turned into a bowling green, with a pavilion on a raised terrace at the end. Now it is another green area with a few seats on the terrace. 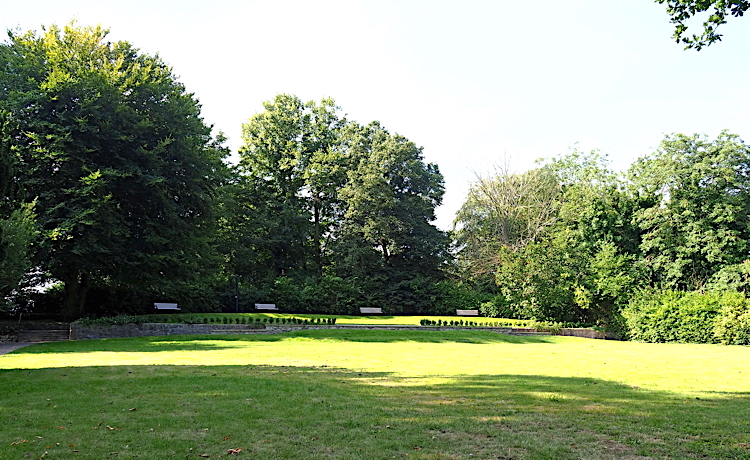 Stone steps give access to the top of the motte. This is a rough area surrounded by mature trees. 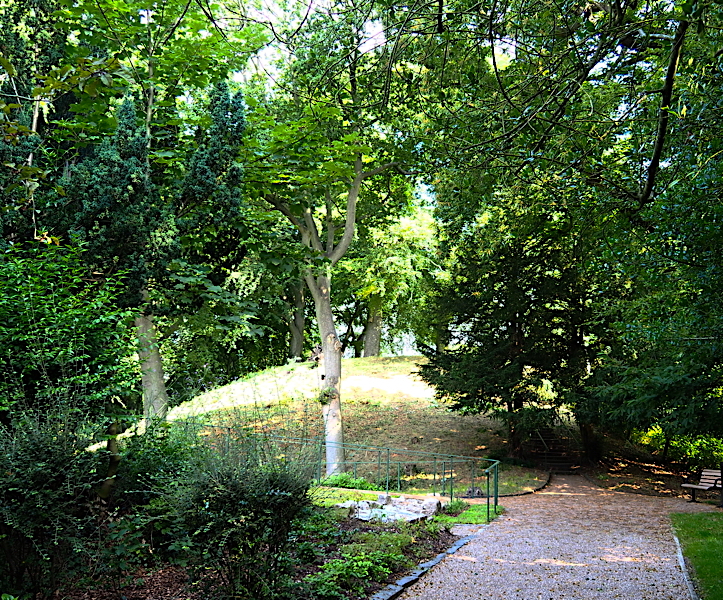 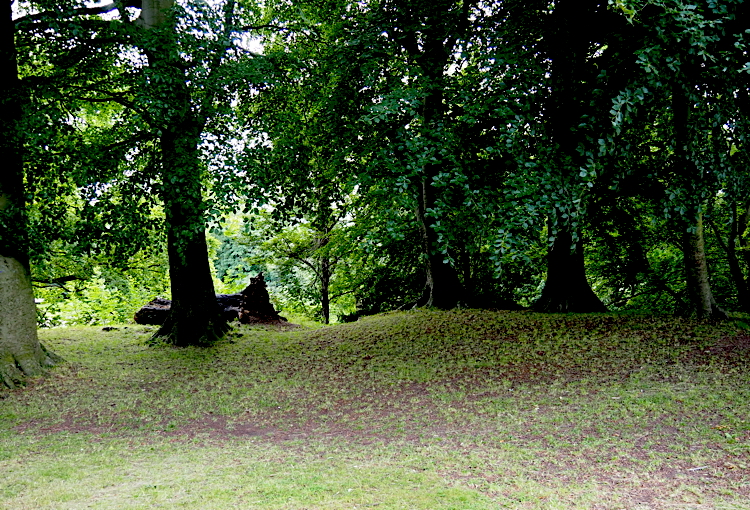 To the north of the motte is the Gorsedd Stone Circle built for the 1923 National Eisteddford . 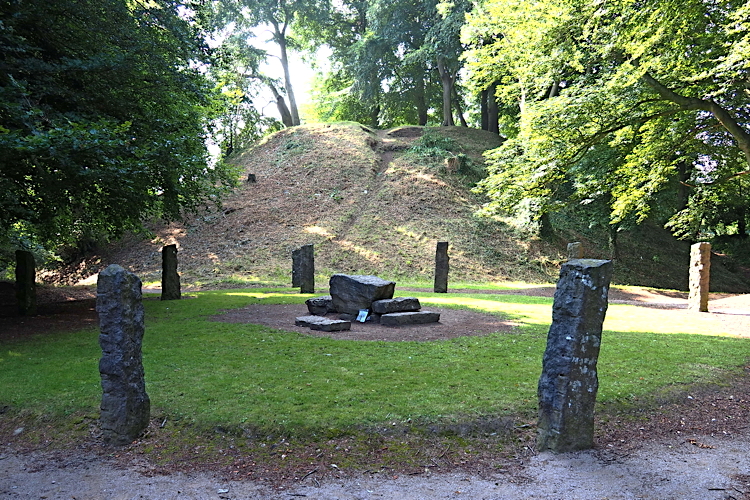 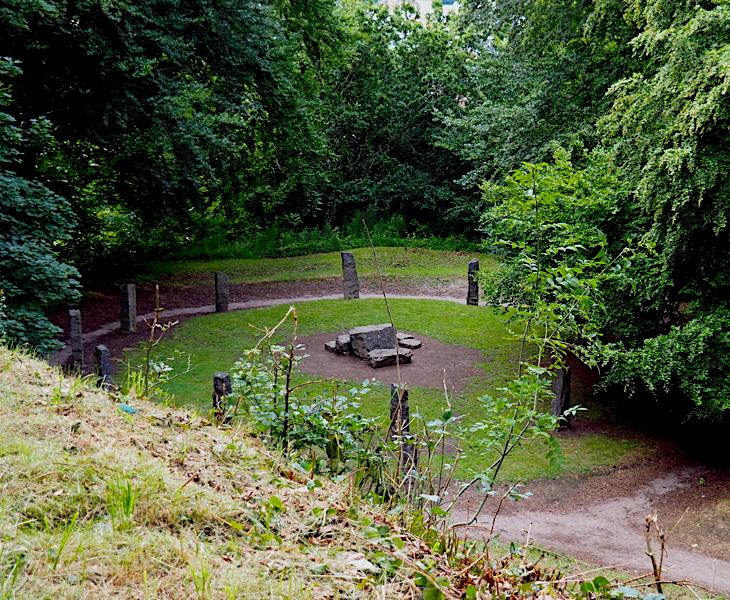 Bailey Hill is popular with locals as a free space to walk and enjoy. It is worth searching out by the visitor too.
Last edited: Oct 1, 2021
http://wasleys.org.uk/eleanor/index.html
You must log in or register to reply here.
Share:
Email Share Link