One of the great ruined abbeys of Yorkshire

The Cistercians knew how to pick their sites and Rievaulx Abbey in the North York Moors is one of the best. It is a delightful setting on the River Rye at the edge of a small village of attractive old stone houses and set against the steep wooded hillside. It is one of the most complete and best preserved of the great Yorkshire Abbeys and walking around the site it is possible to get an impression of the size and magnificence. 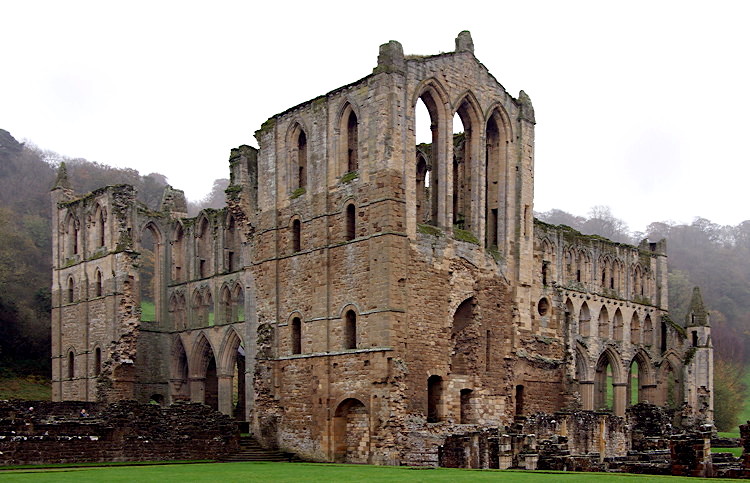 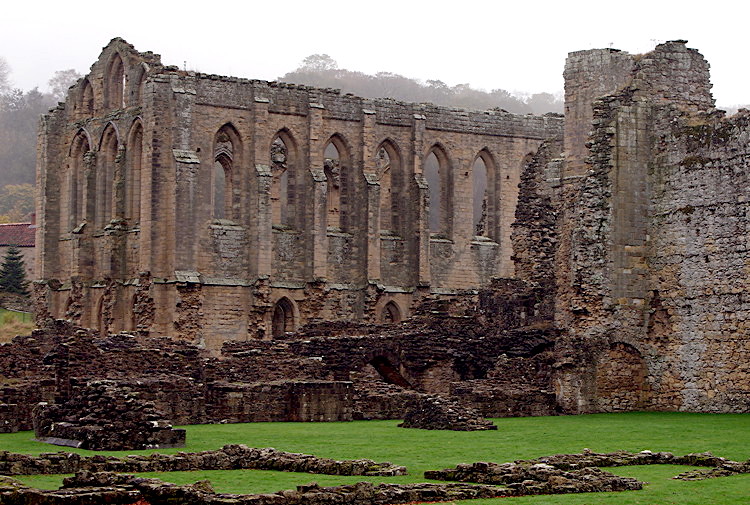 The Abbey was founded in 1132 and was the first Cistercian Abbey in the north of England. It was intended as a base to spread the Christian message across the north of England and into Scotland. The remote location was ideal for the Cistercians who led a simple life of prayer and self sufficiency with as little contact with the outside world as possible.

After the Dissolution of the Monasteries, Henry ordered the buildings to be stripped of lead and other valuables. The ruins passed into the hands of the Duncombe Family who were responsible for the building of the terraces above the river bank with the two Grecian style temples, now in the care of the National Trust.

The site is dominated by the massive cruciform church, at the top of the site. The nave has been robbed out for building stone but the chancel and transepts although roofless, still stand to their full height, as does the refectory and one wall of the infirmary. 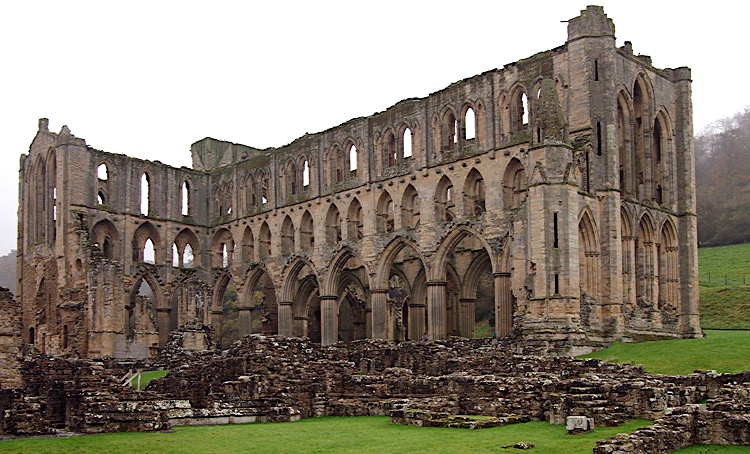 The chancel of the abbey is awe inspiring with its pointed arches and tall lancet windows with the remains of carving round them. The lower parts of the transepts are Norman with round topped windows. Looking at the west wall, the join between the Norman and Early English periods is particularly noticeable. The north transept was built later as the top windows are more elaborate. 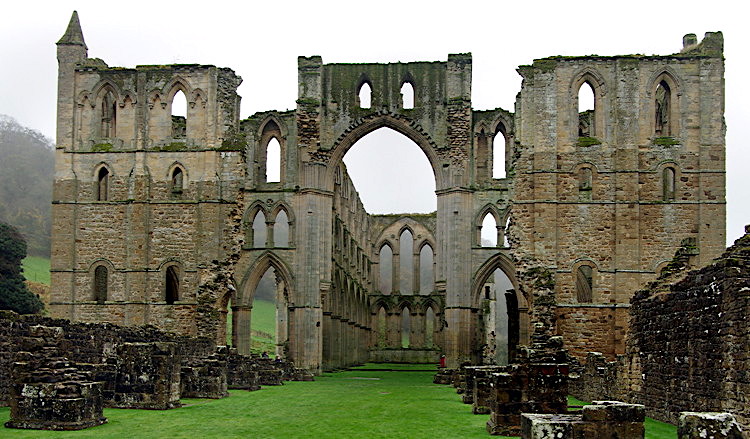 Only the chancel arch survives. Nothing is now left of the central tower. The foundations of walls of the nave and the square pillar bases are left. There are some medieval tiles at the west end. 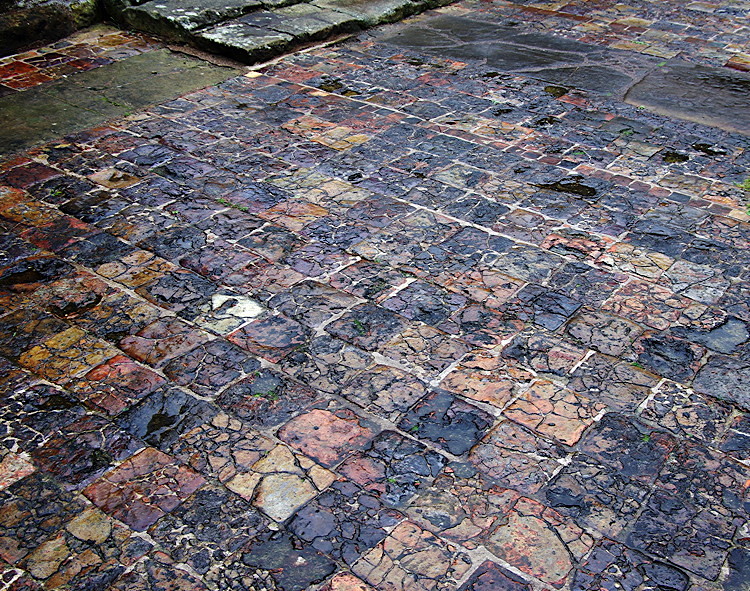 The cloisters are off the south wall of the nave. Not a lot is left, apart from the central grassy square and a small section of arcading with double pillars with carved capitals and low round arches. The blind arcading on the south wall can be seen outside the refectory. To the west of the refectory were the kitchens and the base of the ovens can still be seen. The refectory is now an empty shell but was originally a very tall building with tall lancet windows with blind arcading round them. Beneath it was the undercroft with the remains of the vaults. 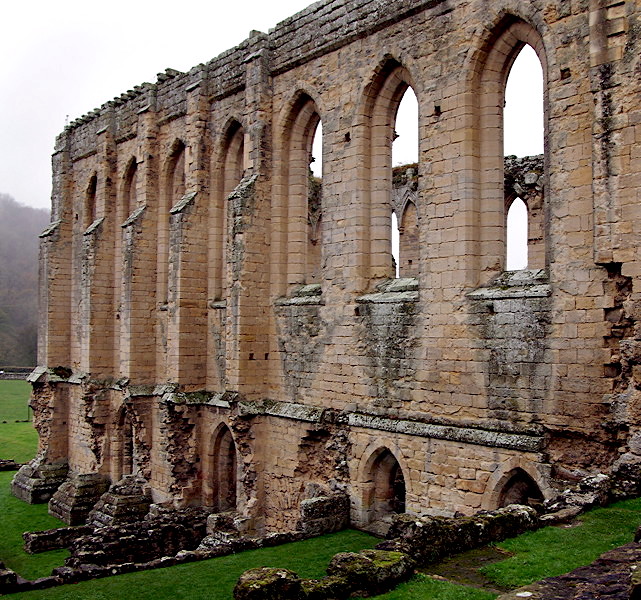 Next to the refectory was the warming house still with the brick base and back of the fireplace. On the far side, steps lead down into the day room with a big fireplace and the remains of a central pillar supporting the roof. The monks dormitory was above it.

Beyond it is the smaller infirmary cloister with a bit of reconstructed arcading. All that remains of the infirmary is an outer Norman wall. Steps lead up to a doorway with the remains of a carving above. 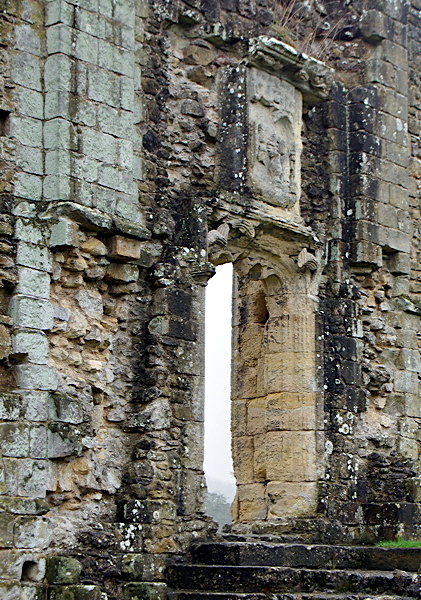 The apsidal chapter house was on the east wall of the Cloisters. Now just the foundations remain, with grave slabs in the floor. By the entrance is the remains of the shrine of Abbot William 11331-45. Beyond the infirmary buildings is a rabbit warren of rooms with low walls and steps. These include the Abbot’s kitchens, complete with drains, cistern and fireplaces. The main drain still runs under the infirmary and day room.

This is a delightful site, a lovely place to drop out in the sunshine and dream as there are plenty of seats or picnic tables around the site. Even on a dull misty day it is still atmospheric. There is a museum with information about the abbey and the monks, covering farming as well as archaeological finds from around the site. There is a small shop and the tea room has excellent cakes.

The Abbey is in the care of English Heritage. There is a charge to park but this is refundable when visiting the abbey.

The above pictures were taken on a dull rather misty February morning. The following were taken on a glorious afternoon at the start of June... This is the view from the road leading to the Abbey. The chapter house with the large refectory building behind. All that is left of the cloister arches. Medieval tiles on display in the visitor centre.