An extravagant private chapel of an arch Royalist who clung to the old ways...

Rug Chapel is a lovely setting among the trees and surrounded by a garden with roses, lavender and herbs.

From the outside it is a very plain building, with a small bell cot above the west end. Nothing prepares you for the magnificence of the interior where every available bit of wood is carved and every surface painted.

The chapel was built as a private chapel for Colonel William Salesbury in 1637. He was a staunch Royalist, scorning Puritan simplicity and wanted a chapel full of high church decoration. It escaped a Victorian makeover and is a rare survivor of a chapel from this time. 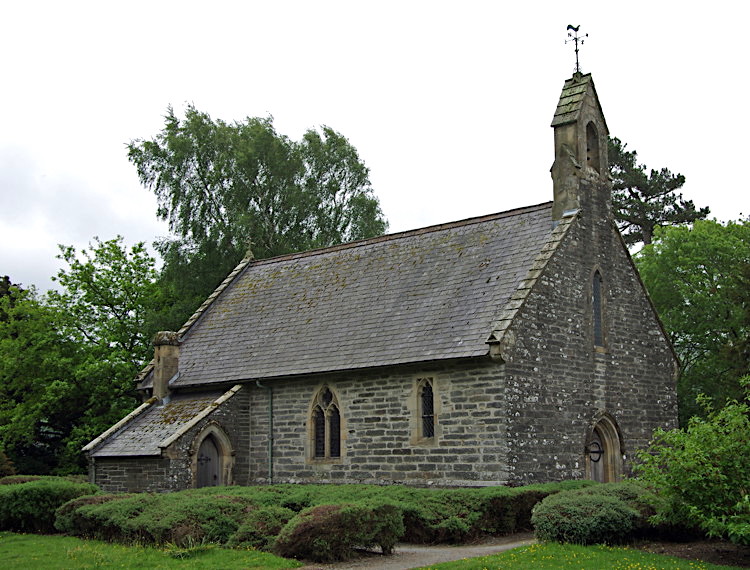 By the door is asimple stone octagonal font with a wooden cover with a large metal cross and an inscription in Welsh round the rim. Steps lead up to a gallery across the west end. This gives good close up views of the painted wood ceiling. Hanging from the ceiling is a wooden chandelier with candles and angels on the top. There are simple wooden benches in the nave with a single rail as a back support. The seats are carefully dovetailed in to a long piece of wood along the nave which forms a ‘door step’ into the pew. Intended to reduce draughts around the feet. It is also a trip hazard for the unwary. This has a series of animal carvings under the pew benches. The lower part of the nave walls are covered with wooden panelling which has four scrolls with a flower motif along the top. 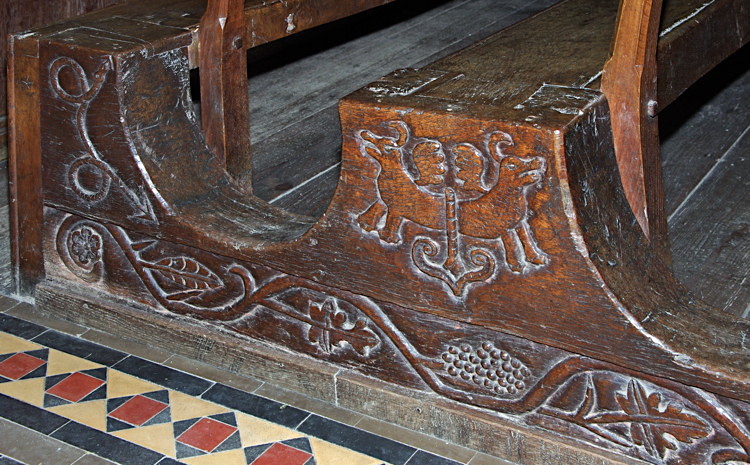 Separating nave and chancel is a rood screen. Beyond is a bannistered altar rail with a simple wooden altar On either side of the chancel are large ‘four poster’ style choir stalls with a canopy above them. These have carved fronts and painted panels. 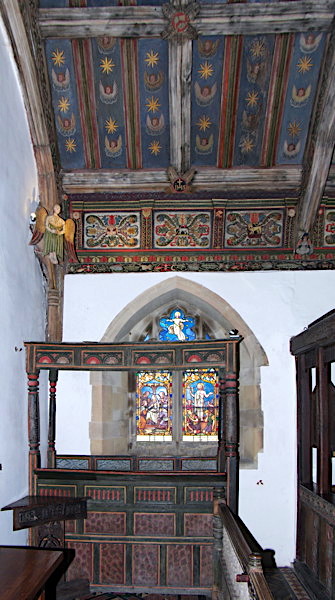 The chancel ceiling above is painted blue with images of cherub heads and stars. 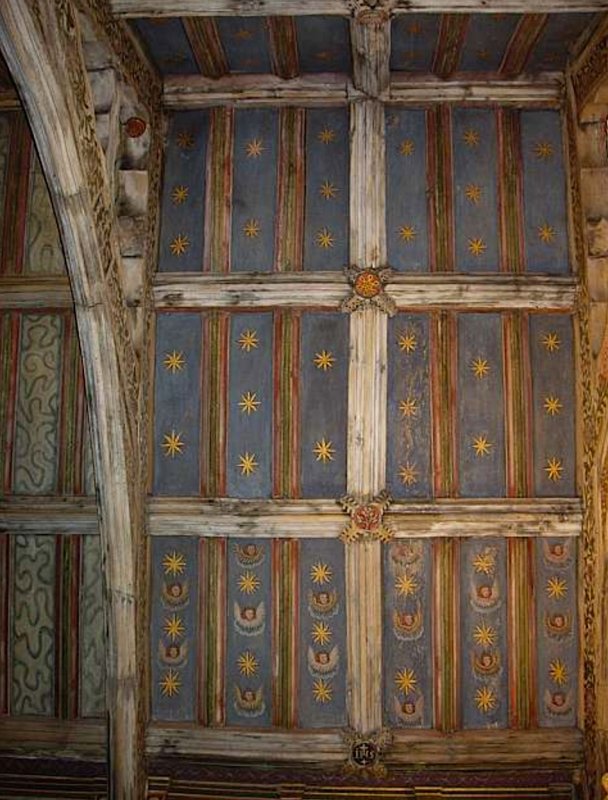 The wooden beam ceiling of the nave has carved and painted beams with scrolls and red or white roses with foliage. Between the beams the nave ceiling has a painted abstract swirl pattern. In the corners of the choir are cut out figures of angels and there are more on the beam ends in the nave. These have either red and blue robes or yellow and green. Their wings are yellow with red and blue horizontal stripes at the bottom. There are memorial slabs on the walls and a splendid painted monument on the north wall of a skeleton and a skull set in a portico with pillars. With a Welsh inscription, it reminds the congregation of their own mortality. The stained glass windows are C19th. The large east window features Christ in Glory with saints, kings and bishops around him and angels above. The double window in the south wall of the chancel has a scene of the Nativity and one of the risen Christ surrounded by Roman soldiers. Another window in the south wall has images of angels and beneath is written “Rock of Ages Cleft for me”.

It is a lovely church and a real delight inside and well worth finding. It is now in the care of CADW and open during the summer months. The ticket also includes entry to Llangar Old Church a short distance away which has C14th and C15th wallpaintings.

Virtual tour of the Rug Chapel
Click to expand...