Seen from the A9 Ruthven Barracks stand silhouetted against the skyline, on a natural mound of sand and gravel deposited by melting ice. They are the smallest but best preserved of the four barracks built in 1719 after the 1715 Jacobite rising. 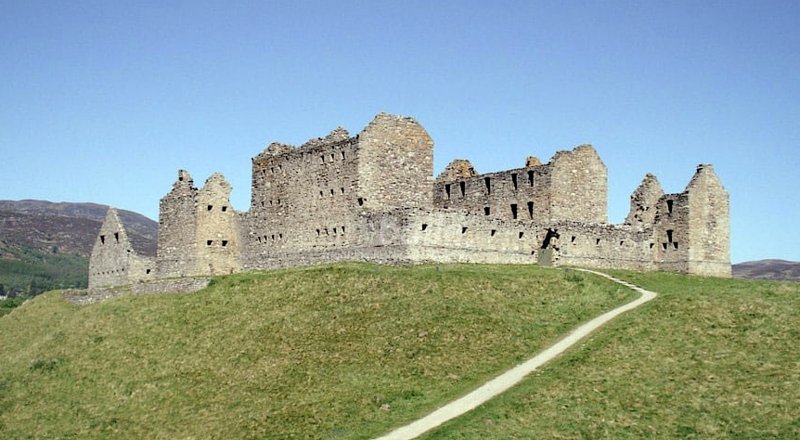 The site has a chequered history. A wooden castle was built on top of the mound by the Comyns in the 1200s and it was the chief seat of the Badenoch lordship as it controlled passageway through the glen. In 1306, John Comyn was killed by Robert the Bruce which triggered a civil war and lead to the fall of the Comyns. In 1371 it became the property and power base of Alexander Stewart, Earl of Buchan and a grandson of Robert the Bruce, better know as the "Wolf of Badenoch". There is a story that one night a lone horseman dressed in black approached the castle and challenged the Wolf of Baddenoch to a game of cards (or chess). The Devil (for it was he) won and the following morning the castle was a smoking ruin with no-one left alive. More prosaically, the castle was seized and destroyed by the Earl of Ross in 1451.

The castle was rebuilt in the late 1500s by the Earls of Huntly. It was a centre of military activity in the C17th and during the Civil War was garrisoned first by Cromwellian troops and later by Royalists. The castle was besieged and burnt down again by Viscount Dundee in 1689. It was left as a ruin.

After the 1715 Jacobite uprising, the castle was demolished and two new barrack blocks were built. They had a commanding view across the surrounding countryside.

The barracks were designed to house 120 troops with separate officers accommodation. In 1724 General Wade began building a network of military roads throughout the highlands and used the barracks as a centre for troop movements. The stable block was added to house 28 horses of the dragoons who patrolled the military roads.

In August 1745, about 200 Jacobites attacked the barracks. They were seen off by Sergeant Molloy with a force of 12 Redcoats. The Jacobites returned in force in February 1746 on their way back north from Derby with artillery and the garrison surrendered.

The Jacobites regrouped at Ruthven after their defeat at the Battle of Culloden. There was a message from Prince Charles Edward Stewart saying he was fleeing the country and they should disperse and save themselves as best they could. Before leaving, they torched the barracks. The remains are pretty much as the Jacobites left them. The exterior walls remain, but little of the interior structure, flooring or roofing survives.

The barracks are surrounded by a stone wall. There were no heavy guns and the barracks were defended by soldiers either firing through ground floor gun loops or from the top of the parapet.

Inside is the cobbled parade ground. On either side are two large barrack blocks, now open to the sky. 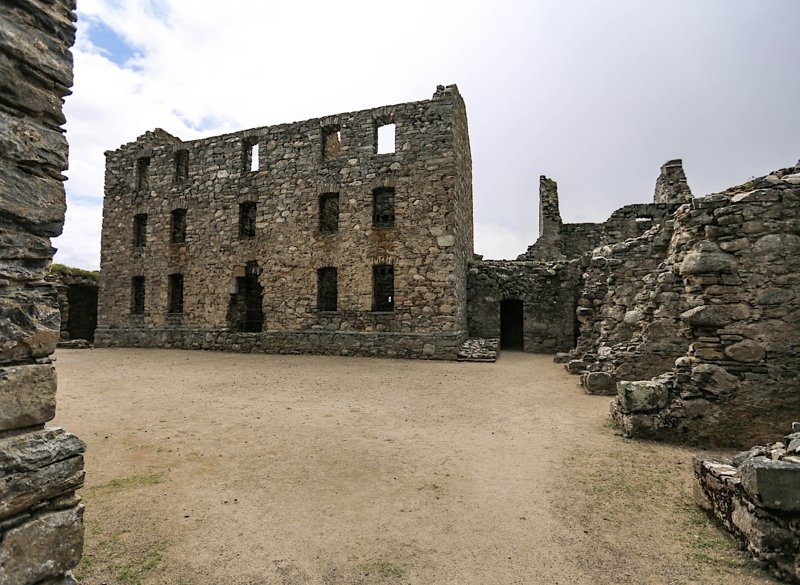 These were three storeys high and had a central doorway leading to a passageway. Low archways lead into the storage rooms on ground floor level. The barrack rooms were above. There are no internal structures left. Holes in the walls mark where floors were and there are the remains of fireplaces. There were six rooms each accommodating ten men sleeping two to a bed. All cooking was done in the barrack room and stores were kept either in the basement or in the lofts.

The latrines were in a separate building outside. External stairs on the sides of the barracks led to the parapet. The well was in a corner of the parade ground.

In opposing corners are two tower houses which provided accommodation for the officers. The bakery and brewhouse was beneath one and the prison cell and guard room beneath the other.

A postern gate was added in 1743 to give access to the stable block. This was divided into two by an internal wall and had four entrances. A stair led to the hay loft and tack room.

The barracks are in the care of Historic Environment Scotland and are freely accessible during daylight hours.
Click to expand...