Reputed to be the smallest ancient cathedral in Britain, there has been a church on this site since the C6th when St Kentigern built a church and monastery here. When he returned to his native Scotland he left it in charge of his favourite pupil, Asaph. A new cathedral was built in the C12th, but was destroyed by the armies of Edward I in 1282. It was rebuilt, only to be burned by Owain Glyndŵr’s troops in 1402, who left it in ruins. The existing building is largely C14th. The tower had to be rebuilt in 1714 after the top was damaged in a storm. This explains the difference in stonework. There was a major restoration, especially of the chancel area by George Gilbert Scott in the C19th 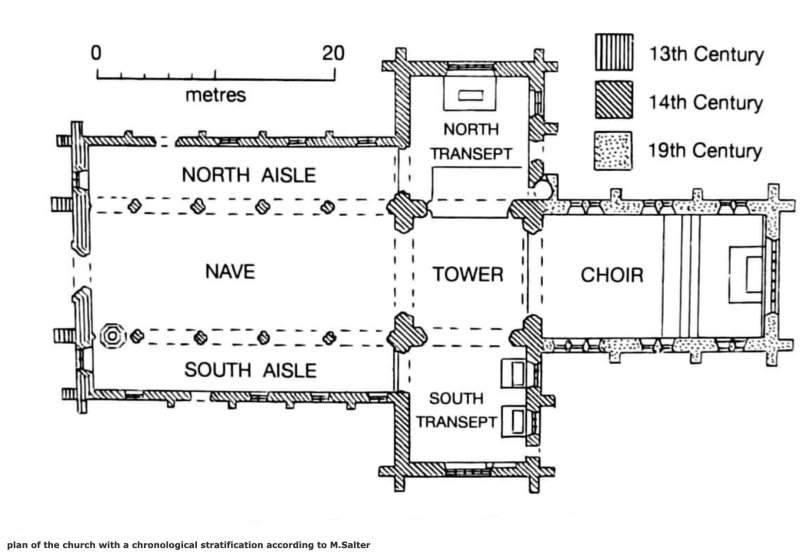 From the outside it is a small cruciform building with a big central battlemented tower with a gold weather vane on the top. 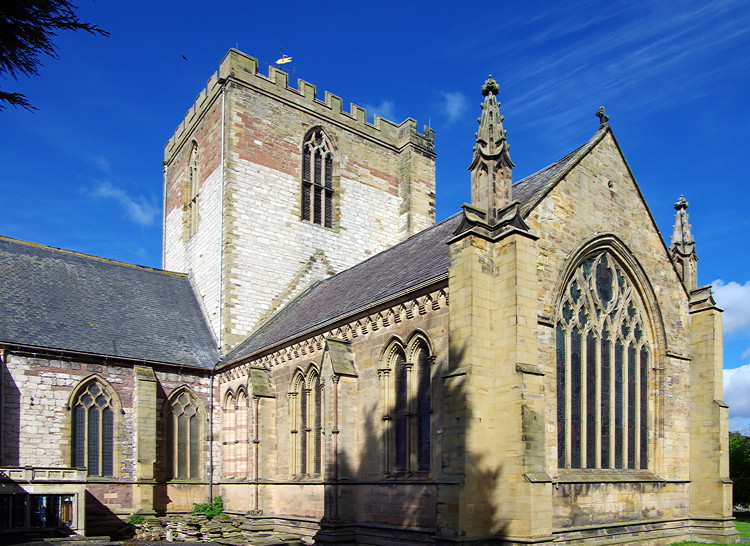 Entry is through the west door which is flanked by two large table tombs. Inside is a glass door, which reflects the graveyard and trees against the stained glass east window. Inside it is a large rather plain building with bare stone walls and an arcade of pointed arches separating nave and side aisles. The nave roof is C14th and was restored and redecorated for the Investiture of Charles as Prince of Wales in 1968. It has painted bosses and the beams are supported on painted bases and carved corbels. The crossing vaults are supported by painted angels holding shields. At the back of the church is the font which was desecrated during the Civil War and used as a watering trough by Cromwell's soldiers. Half of the carving around the bowl have been restored. Next to it is an old wooden chest and a big statue to the memory of William Davies Shipley 1745-1826 who was Dean and Chancellor to the diocese for more than half a century.

On the south wall of the nave is a lovely C13th tomb slab with a hound chasing a hare. Next it it is a tomb with an effigy of a bishop thought to be Anian 1268-93 who was responsible for rebuilding the cathedral after destruction by Edward I's armies.

The south transept is large and has a macabre crucifix, on the east wall by Michele Coxon. Called 'The Naked Man' this caused a bit of a furore when it was placed in the church about 2000. We much preferred the tiny C16th Spanish Madonna, set in a glass niche in the transept pillar. Tradition has it this was washed up from the Spanish Armada as it fled from English ships. 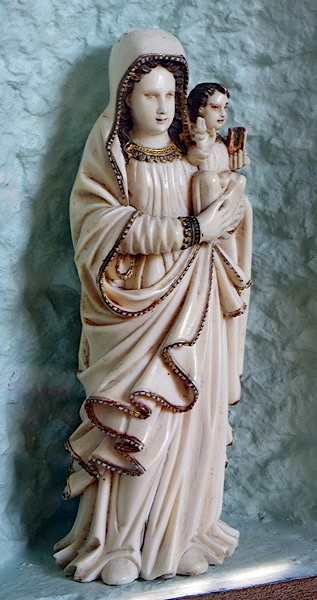 Compared to the nave, the chancel is much more impressive. The massive medieval choir stalls date from 1482 and are the only ones of their kind that have survived in Wales. They have misericords as well as carved arms with griffins, pelicans and other beasts. The back row has the names of the canons painted on the seat backs and are set under crocheted pinnacled canopies. These were faithfully restored by Scott and he was also responsible for the design of the splendid Bishop's chair with carved lion arm ends, painted canopy with two angels holding shields. Behind the high altar is a carved reredos of Derbyshire alabaster. In the centre is Christ carrying his cross to Calvary. On either side is an arcade of blind ogee arches with carvings of angels or foliage between the arches. Above, the east window dates from 1864 and shows the life and teaching of Christ. A the top is Christ in Majesty, Below in the centre is the ascension into Heaven. On the left are scenes from his life including the nativity, baptism, carrying his cross and rising from the dead. On the right are stories including Jesus appearing to the fishermen and the foolish virgins. The east window above is a asplenduid example of C19th stained glass. The north transept contains the Translator's Chapel, which commemorates the men who were responsible for translating the scriptures into Welsh in the C16th & C17th. A glass case contains examples of early Welsh Bibles, including an original 1588 edition of the William Morgan Bible. William Morgan was Bishop here from 1601-4 and was responsible for producing the first translation of the Bible into Welsh. The Translator’s Monument in the churchyard was erected in 1892 to mark the tercentenary of the translation of the Bible into Welsh. Along with Morgan, there are statues of the other translators.

On the north wall in the chapel is the memorial to the dead of World War 1 with a knight in a red cloak receiving the blessing from a bishop in green and white vestments with gold trim. Beside it is a small memorial with the names from WW2. In the North wall of the nave is the stained glass window depicting St Asaph and St Kentigern. Behind their images are scenes from their lives. St Asaph is bringing coals to warm Kentigern. St Kentigern illustrates the legend of the fish and the ring.

The great west window has images of St David and St Edward with their badges above them. At the sides are the badges of the other bishops of Wales; Llandaff, Bangor, Swansea, Brecon and Monmouth.

"Asaph/Asaf" is a biblical name, and quite a popular name in Israel. It is basically the Hebrew word for "collect". The biblical figure is not particularly prominent. This is the first time I've seen the name in a Christian context of veneration, so the cathedral and the story piqued my interest.

Here's the story with regards St. Asaph, according to Wikipedia :

"...Kentigern would frequently pray standing in the icy cold river. On one occasion, having suffered very severely under this hardship, he sent the boy, Asaph, who was then attending him, to bring a brand of blazing wood to burn and warm him. Asaph instead brought him live coals in his apron, and the miracle revealed to Kentigern the sanctity of his disciple. So when the old man was recalled to Strathclyde, after the Battle of Arfderydd, in 573 Asaph was consecrated bishop to succeed him, and became the first Welsh bishop of the see."

Thanks @Eleanor for your many posts about places and landmarks, I don't dive deeply into all of them, but I always find some nice tidbits like this in some of them.

Thank you for that information Joe. I too am intrigued by snippets of (seemingly useless) information. Something I hadn’t realised is that there the parish church in St Asaph is dedicated to St Asaph and St Kentigern. It is just a short distance from the Cathedral on High Street.
http://wasleys.org.uk/eleanor/index.html
You must log in or register to reply here.
Share:
Email Share Link