St Johns is often described as the historic and cultural heart of the Isle of Man. It is a small village on the A1 which cuts through the central valley joining Douglas and Peel. It is an important location at the crossroads of the A1 and the A3 Castletown Ramsay Road. The arrival of the Douglas to Peel railway line and later branch to Ramsay, both now closed, at the end of the C19th led to rapid growth of the settlement.

As an integral part of its historical significance, St Johns has the only Manx speaking primary school, Bunscoill Ghaelgagh, on the island.

St Johns was the site of one of the original Viking Tynwald sites which were scattered across the island. With its central location, itt became the main site in 1471. The ‘Hill’ is of unknown date and is an artificial four tiered mound about 250’ in diameter and 12’ high. It may have been built on the site of an old tumulus or barrow.  

It is connected to the C19th Church of St John by a long processional way lined with flag poles. A Celtic cross style war memorial is on the north side of the path.

Tynwald was important as laws passed were read out here and this was the only way to let the common people know what the law was. Every family would make sure that at least one member was present. Anyone could present a petition about a grievance which was handed to the clerk to be presented to Tynwald. In medieval times, Tynwald would have also been the site of a fairground with booths, stalls and side shows.

Although Tynwald now meets regularly in Douglas, there is a ceremonial meeting of Tynwald every year on July 5th. Following a church service, the sword bearer, Lieutenant General and Lord Bishop, followed by Legislative Council and Members of the House of Keys process to Tynwald. The two chairs on the top tier are for the Lord Lieutenant and Bishop, with the Legislative council grouped round them. The Members of the House of Keys are on the middle tier. The title and brief summary of all the laws passed is read out. There is time for people to present petitions and public officials are sworn in before the procession returns to the church.

Although the present church building, or to give it its official title, the Royal Chapel of St John the Baptist, dates from the mid C19th, there is documented evidence of a chapel here by the mid C16th. By the late C17th, the chapel was in a ruinous condition and was rebuilt. The building was also used as a court house. By the late C18th it was again in poor condition and was completely rebuilt in the mid C19th with money provided by the British Government and also from a public appeal. It is a typical C19th Gothic style building. It is now the parish church although the members of the House of Keys and Legislative Council still meet in the church on Tynwald Day. The Tynwald coat of arms are displayed on the gallery at the back of the church. 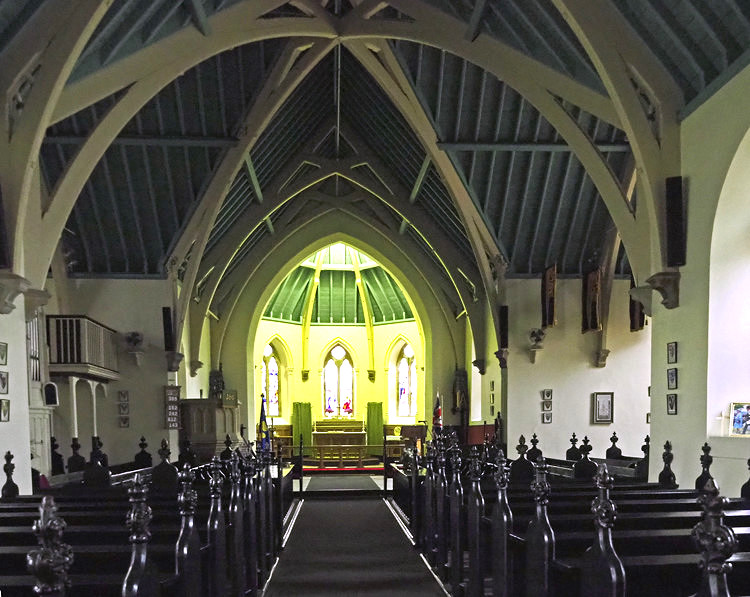 On either side of the chancel are the chairs used by the Bishop and the Lord of Mann or in their absence, the Lieutenant general. The stalls used by the Legislative Council are by the chair of the Lord of Mann. The Members of the House of Keys sit in massive stalls in the crossing, with their names. In the south porch is the remains of a C10th cross found when the new church was built.

On the northern edge of the village on Glen Mooar Loop Road is Tynwald Mill, which was originally a traditional woollen mill. Now long closed, this is been developed into a craft centre, with shops, cafes and children’s playground. It is a popular with the shopaholics and described as the Island’s only department store.

Next to the St John’s Church is Tynwald National Park and Arboretum which opened in 1979 to commemorate the millennium of Tynwald. Each of the seventeen parishes donated trees and shrubs which over the years have grown into large specimen trees. It is an attractive area with a lake with ducks. 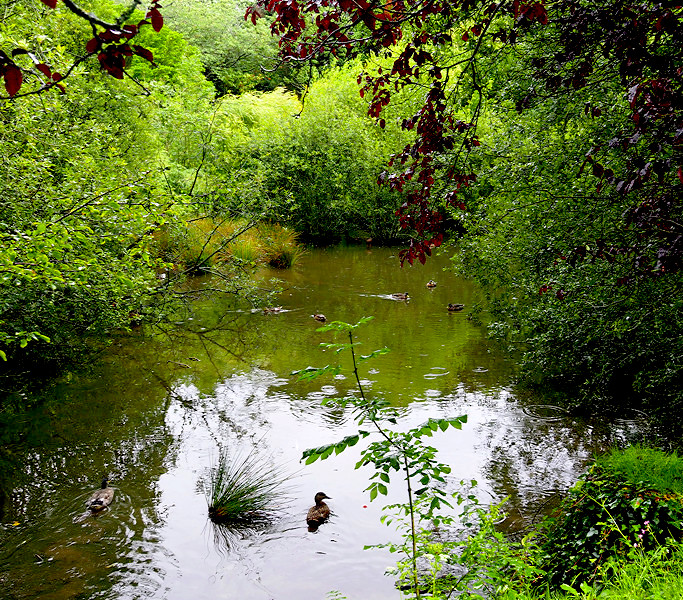 Across the road is the old pinpound which was a small fenced enclosure where straying animals were impounded until claimed by their owner after paying a fine. The term ‘animal’ included chickens, ducks and even swarms of bees. Now it displays four stones, all that are left of Ballaharra chambered cairn dating from around 2500BC. These were discovered when Ballaharra sandpits were being extended in 1971 and donated to the German Parish Commissioners. They were erected here as part of the 2000 Millennium Project. Also part of the 2000 Millennium project is Cooil y Ree, signed off the A1 opposite the pub or the unclassified road opposite Tynwald. This small area was developed as a parkland area to celebrate the history of the Island and its culture and looking to its future. This started out as a good idea but somehow just doesn’t succeed.

There is an information sign by the wheelchair friendly path opposite Tynwald which drops down through an overgrown glen to a large open area at the bottom. A long tree lined avenue is described as the “Avenue of Time’ and intended to form an extension of the processional avenue between Tynwald and St John’s Church. Vegetation on either side was intended to represent the thickets gradually cleared during the Celtic and Viking eras. They are now reverting to natural scrubland. The splendid wallaby is part of the ‘Wallabies Gone Wild Trail, designed to raise awareness and funds for the Isle of Man Hospice. In the side of the bank just down from the entrance on the unclassified road is all that is left of a Bronze Age Burial cist, sometimes referred to as Follagh y Vannin. It would originally have been covered by a circular mound. All that can be seen are the surrounding stone slabs revealed when the roadway was made.