Better known as the Marble Church, this is the gleaming white spire seen from the A55 Expressway and is a local landmark for miles around.

When it was first built, St Margaret's Church was called the ‘Pearl of the Vale’. Now it is better known as the Marble Church, not from its colour (which has turned grey over the years from pollution) but because fourteen different sorts of marble were used in its construction. It took four years to build and cost £60,000. 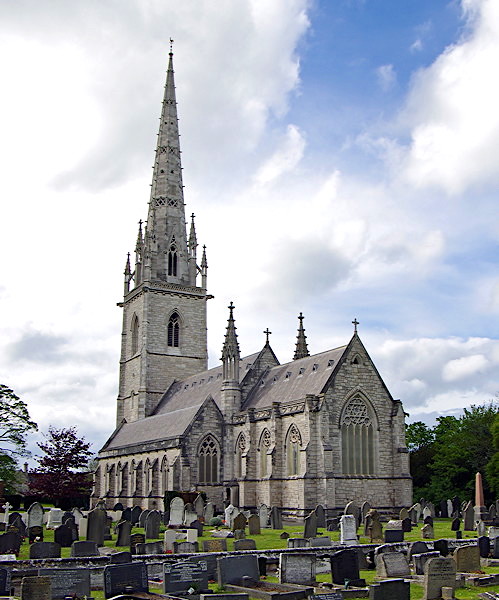 In 1829, Margaret Williams, third daughter of John Williams, 1st Baronet of Bodelwyddan, married Henry Peyto, 16th Baron Willoughby de Broke of Compton Verney in Warwickshire. After his death in 1852, she returned to North Wales with a keen desire to see Bodelwyddan created as a separate parish from its neighbour St Asaph, with its own church. This, she decided, should be a fitting memorial to her dead husband. No money was spared during its construction which involved the work of top craftsmen of the time. She had the enthusiastic support of her brother Hugh, who had just succeeded to the Bodelwyddan baronetcy. They commissioned John Gibson, a pupil of Sir Charles Barry who had worked with him on the new Houses of Parliament. St Margaret’s is regarded as his most successful work.

The church was built from local limestone which was dressed by local men. Sir Hugh sourced the oak needed from his estates. The church was consecrated in 1860.

It is described as Victorian decorated Gothic style with a tall tower flying buttresses, spire and pinnacles everywhere. It is a very elegant church, heavily buttressed and with a decorative frieze around the top of the chancel. The round window at the west wall of the tower has the coat of arms of the Bodelwyddan baronetcy and carved portraits of Lady Margaret and Sir Hugh.

It is entered through the west door beneath tower. The inside is stunning. The nave pillars are red Belgian marble and have elaborately carved capitals with fruit, flowers and foliage. Above are smaller red marble pillars. The corbels are carved with the initials of Henry Peyto Willoughby de Broke and Margaret Willoughby de Broke. The hammer beam roof was made without the use of screws or nails. 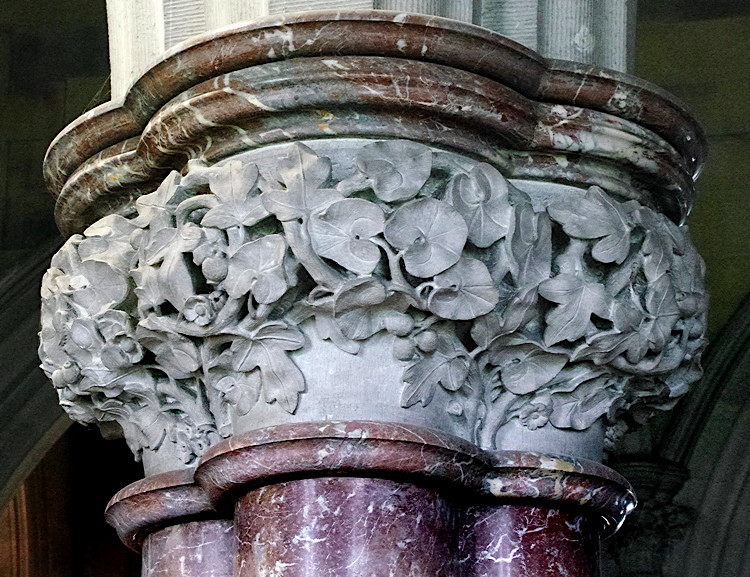 At the ends of the side aisles are beautiful round stained glass windows; the work of Michael O’Connor who was perhaps the best known glass painter of the time.

The lectern is most unusual as it is an eagle perched on top of a craggy rock. Look carefully for the tiny plants carved in the crevices. It was commissioned in memory of Sir Hugh by his children. At the back of the north aisle is the white Carrara marble font with the carvings of the two young daughters of Sir Hugh holding a large shell. 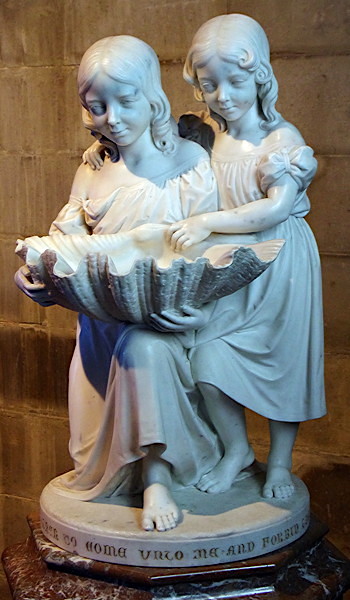 The altar at the end of the south aisle serves as the war memorial chapel. There are the memorials to the dead of both World Wars and the Falklands War on the walls. Behind the altar is a wood reredos with a carving of the Virgin and Child. The O’Connor window above it has the coat of arms of St Asaph, a bishop’s mitre and the Royal Coat of Arms with VR 1859.

Sicilian marble steps lead up into the chancel which is much more elaborate than the nave. Double wall wall pillars of rich red Griotte marble with black Kilkenny marble have carved capitals. The main beams are carved and there are carved bosses with foliage designs. Around the base is a narrow carved frieze. The chancel arch has two angels each holding a book with the texts “I will dwell in thy tabernacle for ever” and “I know that my Redeemer liveth”. 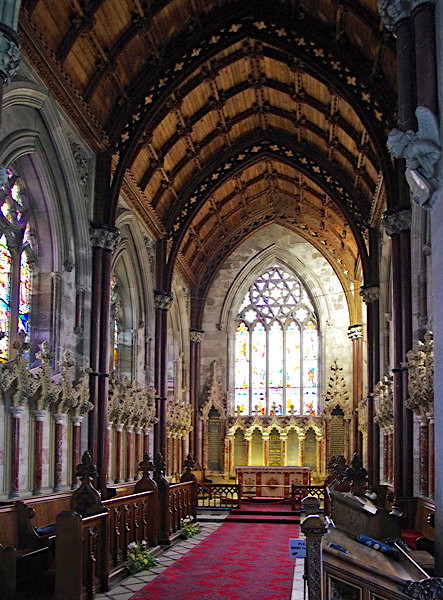 Round the walls is a blank arcade of white marble with crocketted and pinnacled ogee arches with choir stalls in front. The arcading continues below the east window to form the reredos. The central panel has IHS with a quote from St John’s gospel “If any man sin we have an advocate with the Father, Jesus Christ the righteous and He Himself is the propitiation for our sins”. On either side are the Creed, Lord’s Prayer and Ten Commandments. The east window is again by O’Connor and has Christ in Majesty at the top surrounded by angels. Below are sleeping centurions and the women visiting the empty tomb. Round the edge are the four evangelists. Along the bottom is the entry into Jerusalem, Last Supper, the disciples asleep in the Garden of Gethsemane and Christ carrying his cross on the way to Calvary.

In the churchyard are over one hundred war graves from the First World War, including many Canadians who died while stationed at nearby Kinmel Park Military Camp, mainly from pneumonia and influenza.

Most people rush by on the A55 with hardly a glimpse. That is a great pity as it is a magnificent church, as impressive inside as well as out. No money was spared during its construction, which involved top craftsmen of the time. It is definitely worth visiting.