Tobermory in the Isle of Mull was made famous by the children’s TV programme “Ballamory’. It is a popular destination with its brightly coloured houses along the shore.

The tiny distillery on the edge of the town is one of the oldest in Scotland, dating from 1795. Known as Ledaig distillery, which was the oiriginal name of Tobermory, it has had a chequered history and has closed down and reopened several times. It closed during the First World War when many of the men were off fighting. It also closed during the period of American Prohibition as whisky manufacturers were unable to export to America. It eventually reopened in 1970 for a few years before closing again. The distillery warehouses were sold off and converted into flats. In 1993, it was bought by Burns Stewart Distillers, who also own Deanston distillery in Perthshire, Bunnahabhain on the Isle of Islay and began producing whisky. In 2013 it was purchased by Distell who have carried out much needed maintenance and replaced the stills. As well as producing whisky, it also now makes Tobermoray Gin. 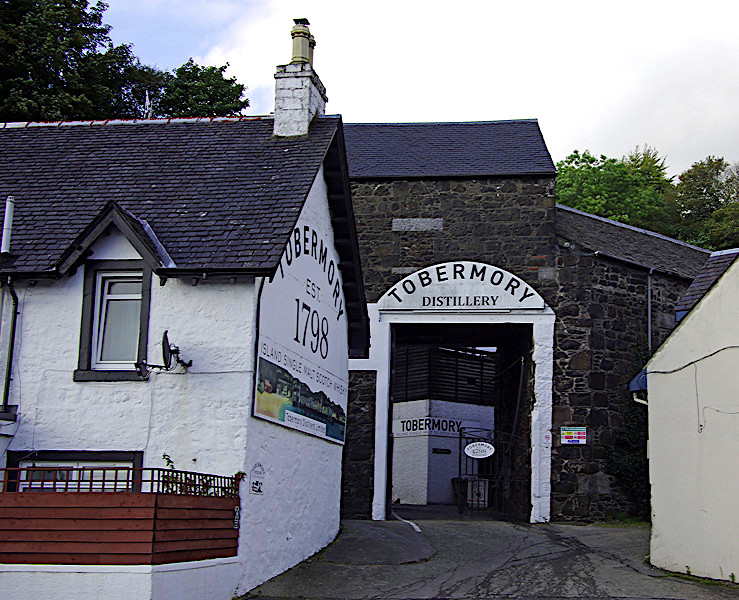 It is now a popular tourist attraction in Tobermory with its small visitor centre and shop. It also runs tours throughout the year. The tours last about 45 minutes and are run by enthusiastic and knowledgeable guides. In high season booking is recommended as only limited number of people can go round the distillery at a time. Photography is not allowed around the site. The price of the tour depends on whether you wish to sample just Tobermory single malt whisky or both Tobermory and Ledaig. It is worth paying the extra as they are very different.

It is very much a craft product produced by traditional means. The distillery can make up to 1 million litres of whisky a year, compared with the 14 million litres produced by larger distilleries like Glenfiddich. It produces two very different whiskies. Tobermory is unpeated and is a very approachable whisky with almost a taste of orange. Ledaig is peated and much more ‘in your face’ with a strong oily peated flavour, almost like TCP. There is a 50/50 split between them, with Tobermory produced in the summer months and Ledaig in the winter.

Three things are needed to make whisky: barley, water and yeast. The distillery has its own loch on the hillside above the town and needs 1.2 million litres of water a day to function. Shortage of water has been kniown to cause a temporary shut down.

The barley is grown on the east coast near Fife and the distillery uses Concerto barley which splits easily and has a high sugar content. The barley used in Tobermory malt whisky is malted near Berwick on Tweed. The barley for Ledaig is malted on Iona where peat is used to dry the barley after it has started to germinate. This gives it a lovely peaty aroma and taste.

The malted barley is delivered to the distillery and the barley is taken to the Mill Room where it is fed into the large Mill Machine. Huge rollers crack open the barley husks, forming ‘grist’. The grist is taken upstairs by a conveyor to the Mash House and into the Mash Tuns.

The Worts is cooled to 18˚ before being taken to the Washbacks. These are massive wooden tanks made from Oregon pine and can hold 26,000 litres of Worts. 100kg of brewers yeast is added. The strain of yeast is crucial and Tobermory use one sourced from Menstrie in Stirlingshire. This starts to ferment the sugars into alcohol producing carbon dioxide which bubbles up to the surface. When all the sugar has been fermented, the yeast dies and drops to the bottom of the tank. This has to be discarded. Fermentation can take 50-90 hours depending on the ambient temperature. The wash liquid is about 6-7% alcohol.

The wash liquid is taken to the still room which has four large copper stills, which have recently been replaced. Copper is a good conductor of heat, is non-corrosive and has anti-bacterial properties. The shape of the still is crucial to the character of the whisky. The stills at Tobermory have very tall extended necks. There is a lot of folk lore attached to them. If the stills need replacing, they are replaced by exact copies, complete with all the dents.

The final distillate collected over the last eight hours is called the ‘Feints’ and this is also returned to the Low Wine Tank to be distilled with the next batch of Low Wine.

The spirit has to be matured in oak casks to become whisky. As the distillery no longer has its own warehouses to hold the casks, the spirit is taken to Deanstone Distillery where it is poured into barrels. These are then transferred to Bunnahabhain for long term storage. The whisky needs to mature in the barrels for at least ten years before being taken to the head quarters of Burns Stewart Distillers in East Kilbride for bottling.

Tobermory Distillery does have a few casks in a store room off the courtyard, mainly to show visitors. The whisky is matured in either sherry or bourbon barrels and picks up colour and flavour from the barrels. It loses about 2% of alcohol a year through evaporation and has to have a minimum alcohol content of 46.3% to be sold as Whisky.

The distillery is at the start of the village overlooking the bay and harbour. There is a large pay and display car park close by. The post code is PA75 6NR and the grid reference is NM 504551. 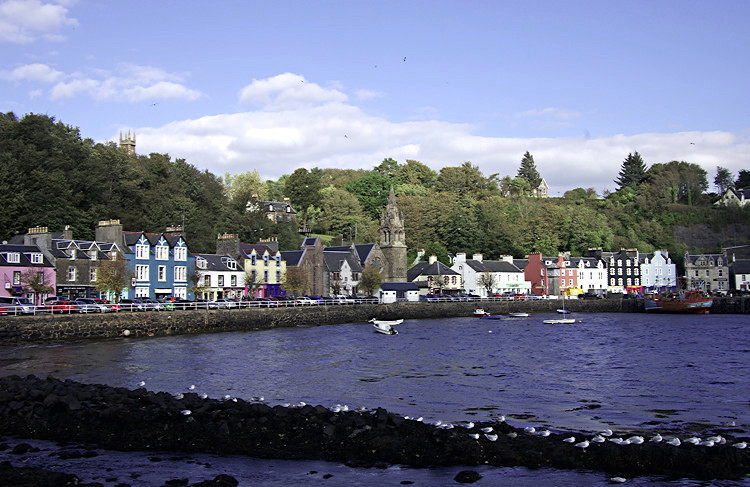 Contest 2019 Winner!
So interesting, thanks Eleanor.
My Great Granny was from Mull, and though I lived in Edinburgh for many years, I never got to Mull.
Yet!

It is well worth visiting - I prefer it to Skye! If you do go, make sure you go to Iona too....
http://wasleys.org.uk/eleanor/index.html
You must log in or register to reply here.
Share:
Email Share Link