The Vikings may only have controlled the Isle of Man for four hundred years but they brought their system of government which is still used today.

The Vikings settled the island from the C9th and brought their system of government with them. Known as Tynwald, this is the oldest parliament in the World. The word is Norse and means ‘assembly field’. Meetings were originally held in the open air to discuss matters affecting the community. Several small Tynwald sites can still be found around the island. These were small raised mounds were the chieftain and local population would meet to discuss matters affecting the community and administer justice. The site at Killabane just north of St Luke’s Church in the east Baldwin valley was last used around 1428

St John’s, with its central location, became established as the main site from 1417. 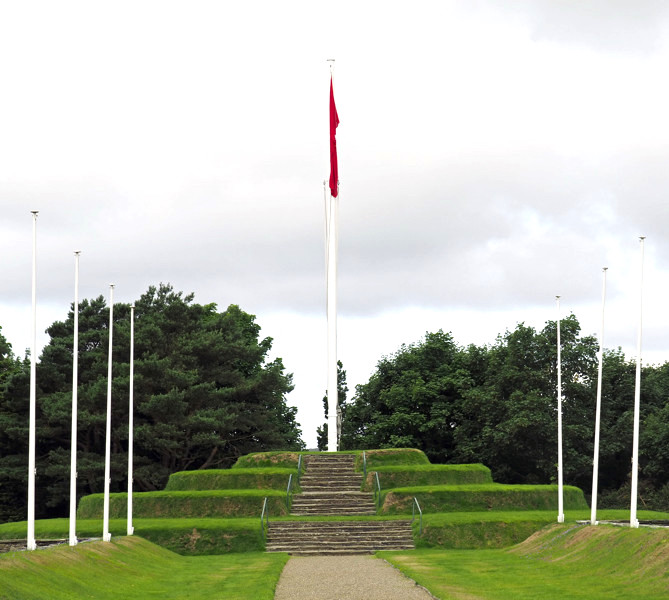 The ‘Hill’ is of unknown date and is an artificial four tiered mound about 250’ in diameter and 12’ high. It may have been built on the site of an old tumulus or barrow. It is connected to the C19th Church of St John by a pathway lined by low earth banks. 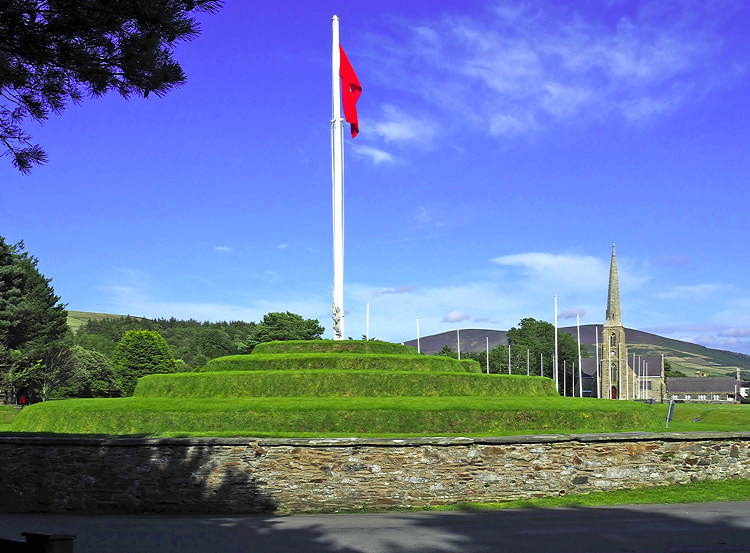 Tynwald was important as laws passed were read out and this was the only way to let the common people know what the law was. Every family would make sure that at least one member was present. Anyone could present a petition about a grievance which was handed to the clerk to be presented to Tynwald. In medieval times, Tynwald would have also been the site of a fairground with booths, stalls and side shows.

Although Tynwald now meets regularly in Douglas, there is a ceremonial meeting of Tynwald every year on July 5th. Following a church service, the sword bearer, Lieutenant General and Lord Bishop, followed by Legislative Council and Members of the House of Keys process to Tynwald. The two chairs on the top tier are for the Lord Lieutenant and Bishop, with the Legislative council grouped round them. The Members of the House of Keys are on the middle tier. The title and brief summary of all the laws passed is read out. There is time for people to present petitions and public officials are sworn in before the procession returns to the church.

With the arrival of the Stanleys at the start of the C15th, Tynwald met irregularly at Castle Rushen, to help deal with taxation of legal matters. The Vikings had divided the Isle of Man into 12 ‘sheadings’ and each sent two men to Tynwald. Known as Members of the House of Keys, these were originally self elected land owners, who were carefully vetted by the Lord of Mann, and usually there for life. (There have been free elections since 1866)

Tynwald later moved into temporary premises in the George Inn in Castletown, before moving into a specially built building off Castle Street in 1821. 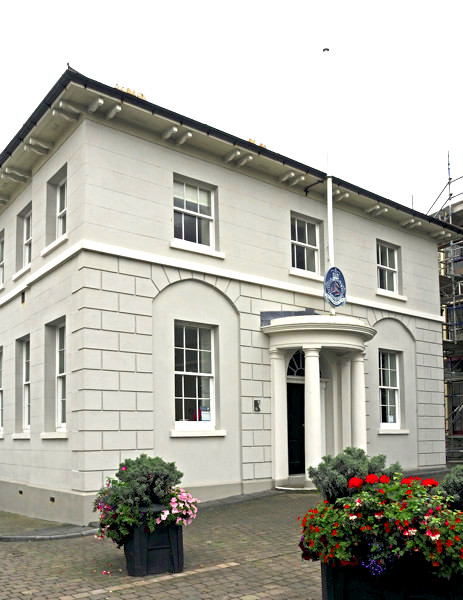 The Old House of Keys is now in the care of Manx Heritage and has been carefully restored how it looked in 1866. Visitors can join in ‘debates’ in the original assembly chamber, lead by the ‘speaker’ is his chair at the head of the table. The recorder sat at a small table in the corner. 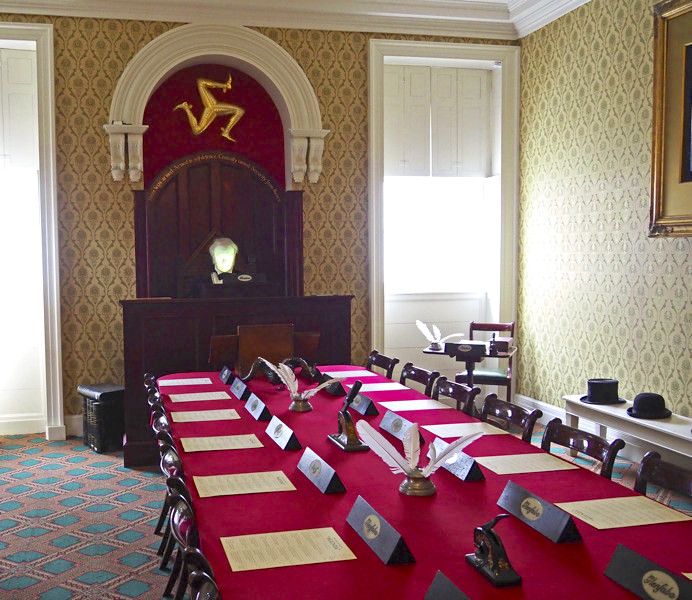 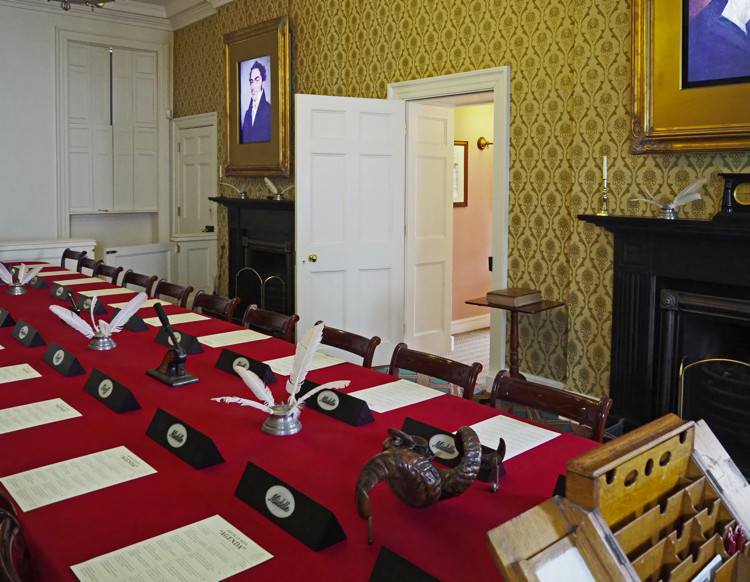 By 1874, the old House of Keys was in need of major repair with an overflowing cesspit behind it. The capital had moved from Castletown to Douglas in 1869, and it was decide to move Tynwald into the Splendid Bank of Mona building which had been taken over by the government when the bank collapsed in the 1850s. Tours of the building are held twice a week. 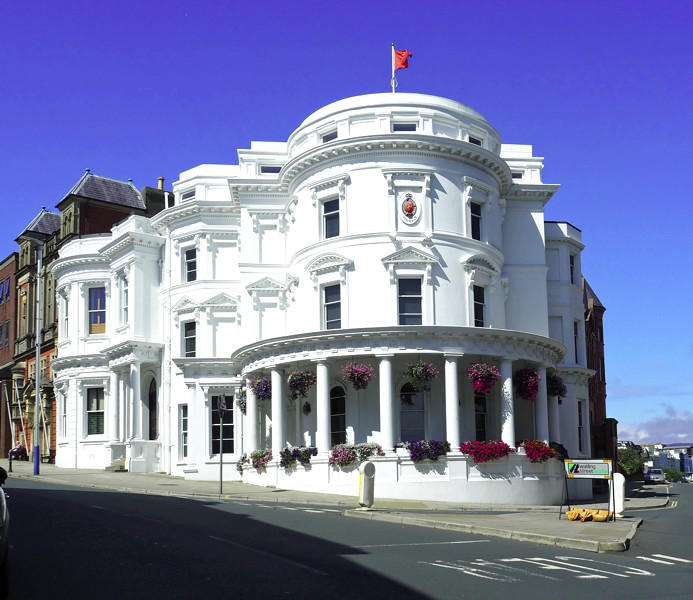 The tour begins in the Members room which is used as a common room for tea and biscuits. 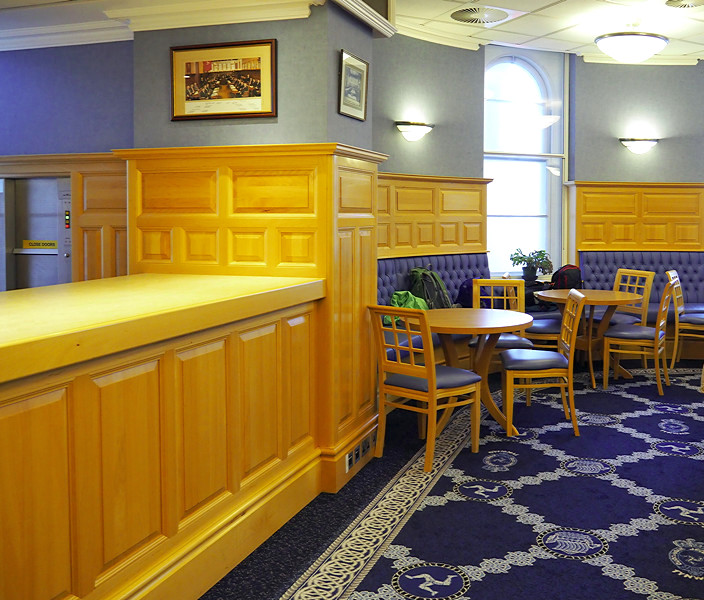 The Isle of Man has no representation at Westminster. There are three chambers to the parliament
• House of Keys, which is the popularly elected chamber and has 24 members
• Legislative Council (equivalent to the House of Lords), a mix of ex-officio and elected members. This has 11 members with 9 voting members.
• Joint Council when all the members meet on the third Tuesday of the month.

The electorate can vote from the age of 16 and elections are held every five years. Members have to be over 18 and resident on the Isle of Man for at least five years. The twelve constituencies are similar to the original Viking ‘sheadings’ and each have two members.

After an election the Speaker and First Minister are elected. Other members are then selected for the eight ministerial positions which form the cabinet. Most members are attached to a department. There are no parties and it is very much a ‘consensus government’

Members of the House of Keys meet at 10am every Tuesday. Meetings are broadcast on Manx Radio and are open to the public. 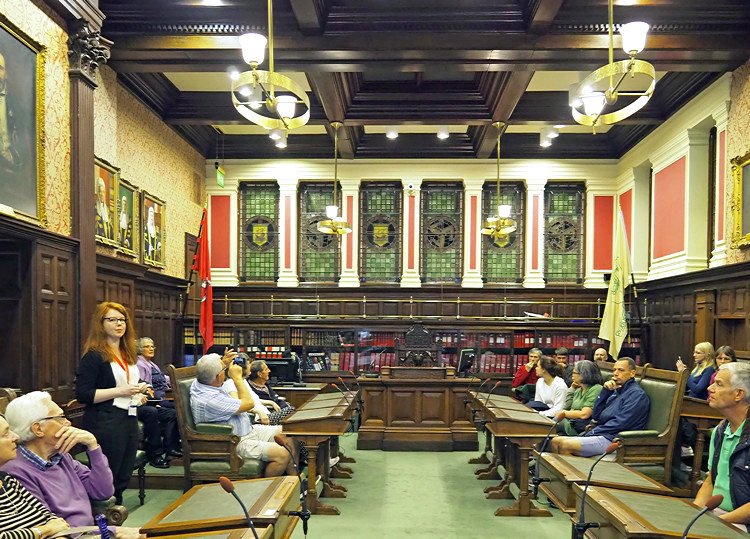 This is a splendid room with wood panelling and ceiling and stained glass. The speaker sits in the carved chair overlooking the floor. Traditionally he wears a gown and wig, although many are not too keen on the wig. Round the walls are pictures of previous speakers. On his left is the Chaplain who reads out the prayers at the start of the meeting. The secretary acts as clerk and is a public servant with no political role or vote and recording the meeting.

Each session begins with one hour question time. All questions have to be tabled before hand although supplementary questions can be asked, but they do need to stay on topic. The speaker controls the debate.

The main business is primary legislation. A bill is introduced and members have two weeks to think about it before it comes back to House of Keys to debate the main principles and if major amendments are needed. Members then vote on it. Votes are heard verbally with Ayes or Noes, unless there is a challenge when members vote electronically and the result is displayed on a screen at the back of the chamber. The speaker has the casting vote and votes to keep the status quo.

After another two weeks it comes back to debate clauses in detail followed by another vote. It comes back for a third reading and final vote before going to the Legislative Council for further consideration.

The Legislative Council is on the floor above and is an equally impressive room, with pictures of past presidents lining the walls. Members sit at the semi circular table with the president at the centre flanked by the Lord Bishop and Attorney General. Members sit on either side in order of seniority. 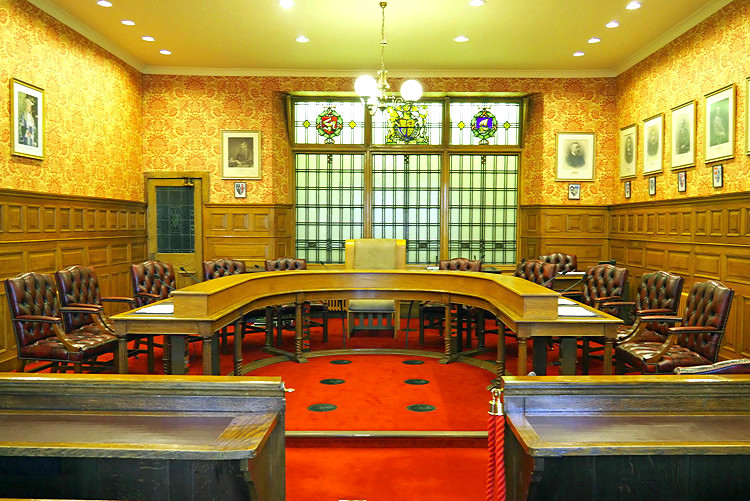 Eight members are elected by the House of Keys on a rolling programme. Many are ex members of the House of Keys and elected for their expertise. They serve for five years and can stand for re-election. Ex officio members include the Bishop of Sodor and Man, the Attorney General who doesn’t have a vote and the Presiding Officer or president, who has the casting vote. The Lieutenant General used to be the head of Tynwald. Being head of both government and judiciary, he was the most important Governor in the British Empire. Now he is replaced by the Presiding Office, who is the president of Tynwald and elected from the membership, holding the position for five years.

Meetings also include a question time, but the main purpose of the Legislative Council is to scrutinise bills from the House of Keys to make sure they are ‘fit for purpose’. Members cannot radically change anything or change policy. Once a bill is agreed, voted on and signed, it is given the Royal Assent by the Lieutenant General and will be read out at the next annual meeting on Tynwald Hill.

Meetings are not broadcast by Manx Radio as they take place at same time as the House of Keys, but they are streamed on the isle of Man Government website.

Next to The Legislative Council is Tynwald Chamber, which is perhaps the most impressive of the three rooms with its domed glass ceiling. 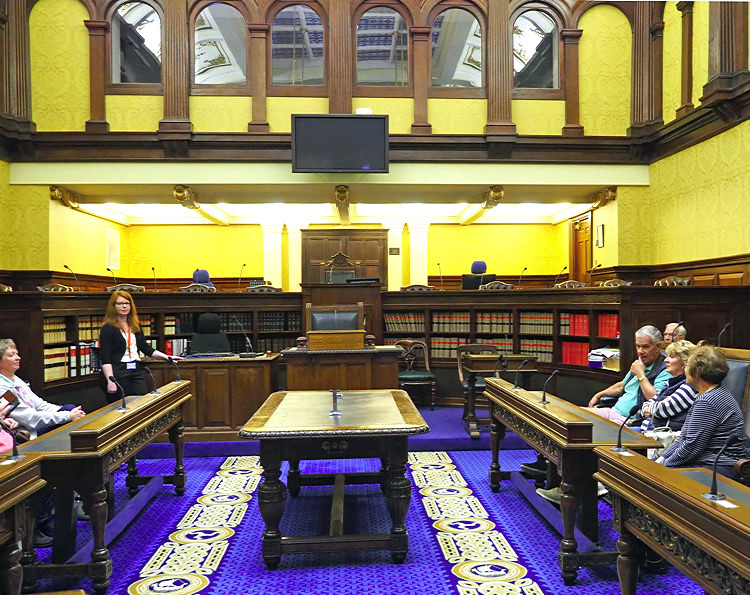 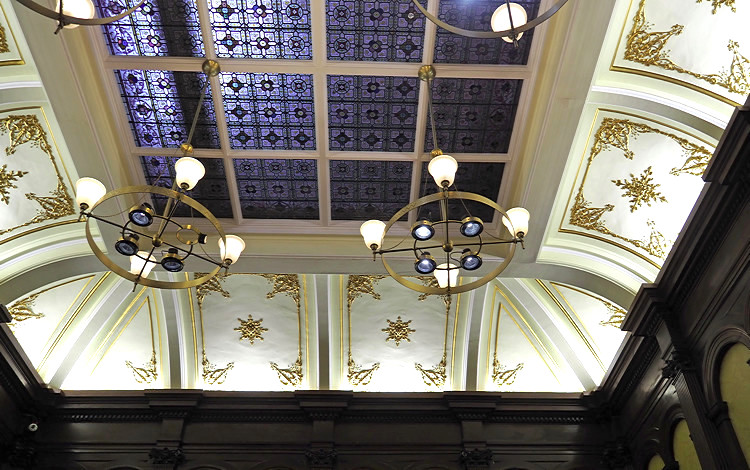 Members of the House of Keys meet with the Legislative Council once a month. The Legislative Council members sit on the raised dais behind the table. The President sits in the centre with the Speaker below him. Members of the House of Keys sit on the floor. When in session, the Sword of State, representing the authority of the court, is place on the table with the point towards the bar.

The public gallery is at back of chamber and is separated from the main meeting by a ‘bar’ which is shut once Tynwald is assembled. The Lieutenant General has a seat in the back right hand corner, indicating that he is not part of the sitting. 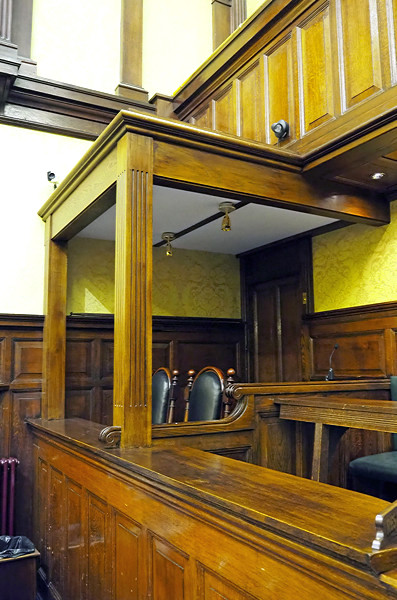 In the opposite corner is the press box and Manx Radio.

Meetings begin at 10.30 and continue until all business has been finished. They start with 2.5hrs question time and, again, questions have to be tabled in advance. After lunch ministers give prepared statements. This is followed by financial and policy discussions. The work of the government is scrutinised and government reports and any committee reports are discussed and approved. The meeting finally ends with private members motions.

Although the Legislative Council and Members of the Hose of Keys vote separately. If there is a tie, the president has to vote in accordance with the majority vote of the House of Keys.
Last edited: Dec 23, 2022
Click to expand...