Uphill, to the south of Weston-super-Mare has managed to avoid being consumed by its larger neighbour. It still retains very much its own identity with an open landscape of limestone grassland, grazing marsh, saltmarsh and scrub. To the south are the Somerset Levels. It stands on high ground above the mouth of the River Axe. The name comes from a combination of Scandinavian personal name Hubba and the Old English ‘pill’ for creek. It is thought the Romans may have had a port here to export lead from local mines. There was a well established settlement here recorded in the Domesday Book, with 60 inhabitants. There was plenty of fresh water, meadows for grazing cattle and good agricultural land for growing crops. It was also well sheltered from all but the fiercest storms by the bulk of Brean Down to the west. 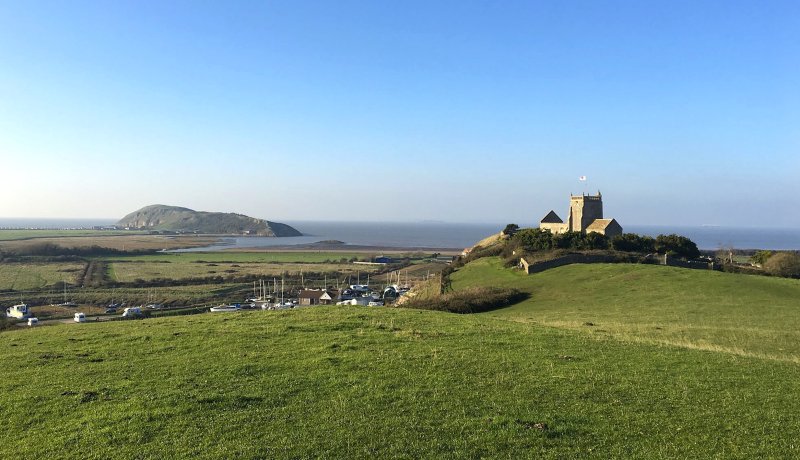 The Monks of Glastonbury Abbey began construction of flood defences along the River Axe and drainage ditches, turning the River Axe into an important inland waterway. More of the salt marsh was reclaimed in the C17th, establishing new fields referred to as ‘warths’. Hedges were planted and low walls of stone or hurdles helped trap the silt, allowed fields to be established in under two years. After bad floods in 1800, a large sluice was built near Bleadon to stop the influx of tidal water. The river was straightened to lessen chances of flooding. New flood defences were built in 1983 near to the entrance to the boatyard

A port flourished here from the C17th to C19th , bringing large numbers of sheep and cattle from South Wales for summer grazing before being taken to market. In C19th, lime was exported to South Wales for the steel industry and the remains of a lime kiln can be seen near the boatyard.


The Old Church of St Nicholas stands on top of the hill, above the disused limestone quarry. It dates from 1080 and may have been built on the site of a Saxon church. It still has a blocked Norman doorways although parts of the nave were rebuilt in the C13th and the tower is C15th. Very much a local landmark, the west wall of the church was whitewashed in 1828 as a navigational landmark.

By 1840, the church was in a poor state of repair and was also too small for the congregation. A new church was built in the village. The old church continued to be used as a mortuary chapel and the chancel was restored but the nave roof was removed as it had become dangerous. It is now in the care of the Churches Conservation Trust. Uphill Manor in the village, near the new church was originally built in 1805 as a school. It later became a private home and was extended with the addition of the magnificent high Gothic features. It is now a luxury self catering property.

Across the road from it is the Donkey Field. This was the retirement field for the donkey used on the Manor estate to pull a handcart. It was later used to pasture beach donkeys from Weston. It now belongs to Woodland Trust and covered with wild flowers.

Uphill Beacon is the remains of a late C18th/early C19th windmill on top of the hill near the old church. It has been restored with a stainless steel beacon on the top reached by a concrete spiral staircase. Inside there are information panels about the landscape and wildlife. There are 360˚ views from the top along with panels identifying the views. 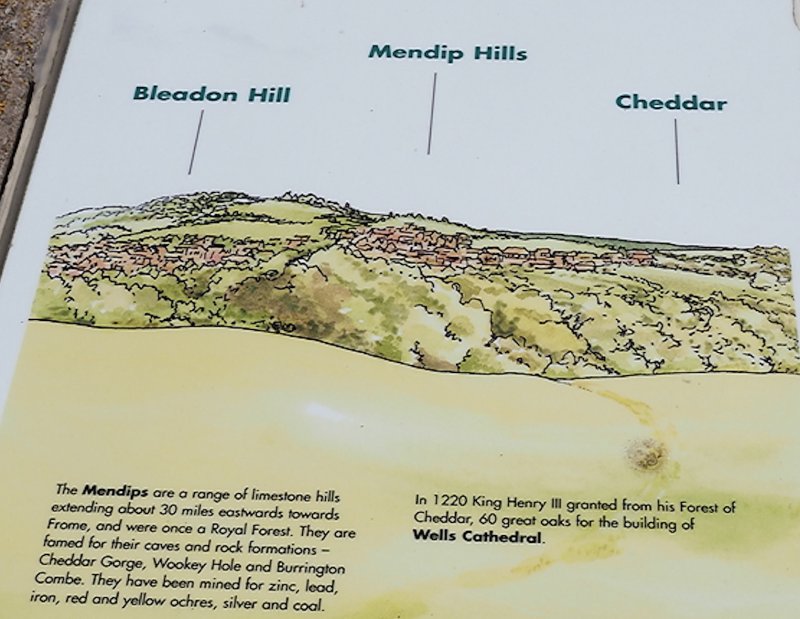 The area on the top of the hill has been grazed by sheep since the Middle Ages and has not been ploughed. It is an area of species rich calcareous grassland and is now a local nature reserve.