Although this is one of the best examples of a great cistercian monastery, it is ignored by the tourists and never gets as busy as nearby Rievaulx.


In its heyday, Byland Abbey was one of the three great monasteries of Yorkshire along with Fountains and Rievaulx Abbeys. It had extensive lands with many farms and its main income was from sheep farming. On the edge of the Vale of York and North York Moors, it now lies ruined and forgotten by most of the tourists. This is a shame as it is a delightful place, so quiet, peaceful and unspoilt. Many of the walls remain and it is an almost complete example of a typical Cistercian Monastery. 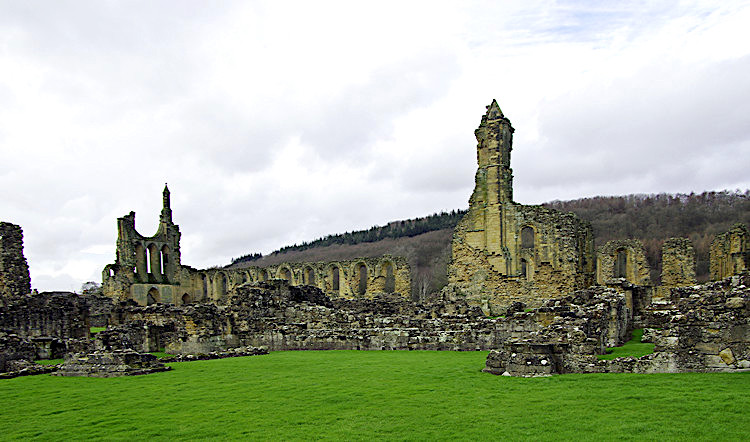 A picture in the small exhibition shows what the abbey looked like in the C15th. Byland is unusual as it was originally a Savignac Abbey founded by monks from Furness Abbey in Cumbria. The Savignacs wanted a return to the simple and strict observance of the rules of St Benedict.

Monks from Furness established a small community in Old Byland in 1142. This was close to Rievaulx Abbey and the monks could hear each others bells ‘which was not fitting and could be no means endured’. They moved to the present site in 1147, the same year that the Savignacs merged with the Cistercians.

The earliest building is the west range which housed the lay brothers, suggesting they arrived first to help construct the buildings. The chapter house, refectory, and abbot house soon followed. The present abbey church was constructed round a temporary building which was progressively demolished as the new church was built.

Building began with the east end in the 1170s followed by the transepts, nave and west end and took about 20 years. The west end with its tall lancet windows and round window marks the transition from the round Norman architecture to the Early English style. Floors were paved with C13th green and yellow glazed tiles laid in mosaic patterns and many still survive. These are covered during the winter months to protect them from the elements.

By the end of the C12th the abbey had attracted many wealthy patrons who granted lands and it became a wealthy agricultural foundation with estates as far away as Cumbria. There were about 80 monks, supported by 160 lay brothers.

The monastery suffered from raids by the Scots in the C13th and C14th and along with the Black Death, the number of monks dropped. By 1381, it is recorded there were only eleven monks and three lay brothers. The monks now obtained their main income from rents and leases rather than direct farming.

At the Dissolution of the Monasteries, the abbot and remaining monks were given pensions. The buildings were stripped of anything usable and stone was taken for building material.

The site would originally have been surrounded by an outer wall and entered through a gateway. The remains of this can be seen beyond the car park. The abbey church is the largest single building still standing on the site. It was typical Cistercian cruciform church with a central tower, now long gone. The monks used the east end of the church for services, while the lay brothers used the nave.

Arriving from the east on the road from Ampleforth, the first view is of the massive north wall and transept of the church with its buttressed wall and round topped windows. The impressive west end probably had a porch in front of it, marked by the remains of foundations in the grass. 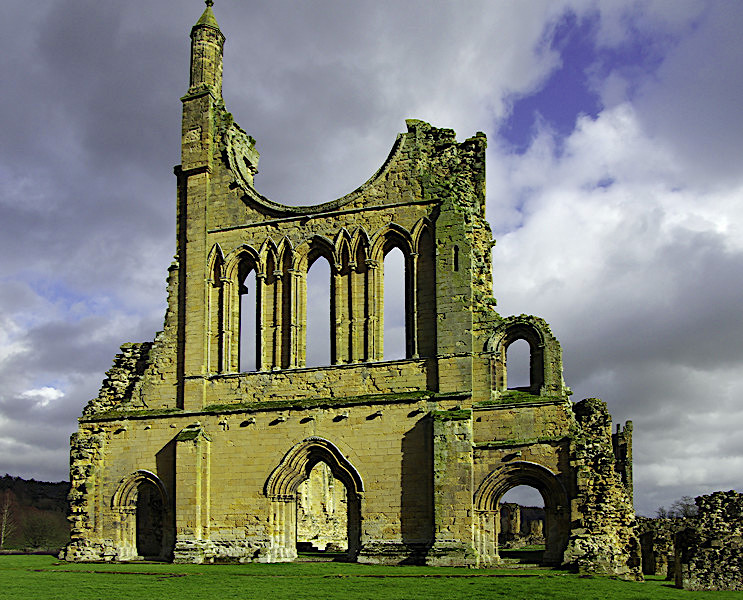 The massive nave pillars are now stumps in the grass and there is little left of the east end or south transept. Little now remains of the cloister to the south of the church. It was one of the largest of any monastery and was surrounded by arcading which was glazed in the C15th to keep out the wind and rain. This was where the monks copied manuscripts. 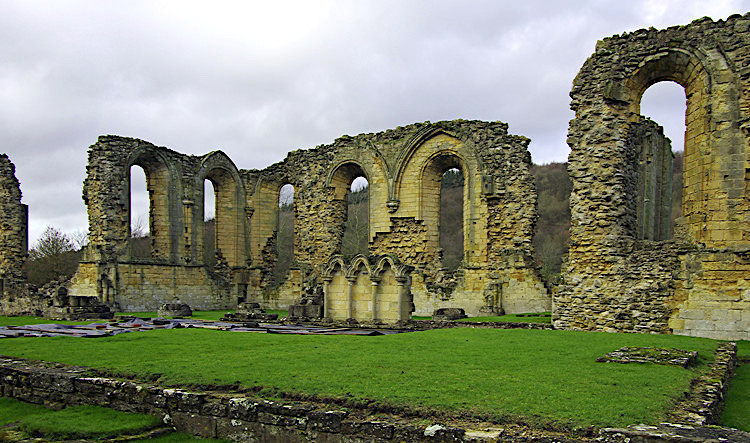 On the east side of the cloister was the chapter house. All that remains are the tiered stone benches round the walls. Next to it was the small parlour, the only place the monks were allowed to talk. Beyond are the stairs leading to the monks dormitory on the first floor above. 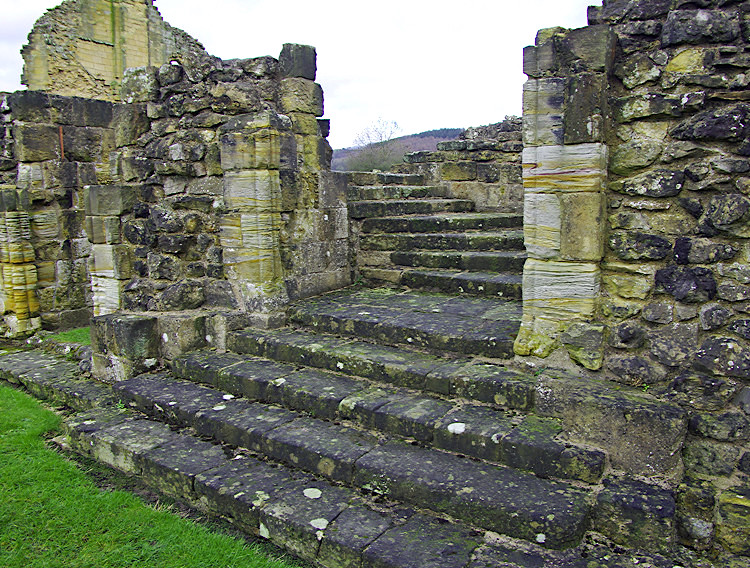 The warming house was the only place where a fire was allowed and still has the remains of its large fireplace. Next to it was the undercroft, still with the bases of the columns supporting the vaulted ceiling. Above was the monk’s refectory. Monks ate their meals in strict silence while one monk read from the scriptures. On the far side are the kitchens. The original fireplace was probably an open fire in the centre of the room but was replaced by smaller hearths in the C124th or C15th. It consisted of a series of rooms on the ground floor - refectory, day room and cellars, where food and bales of wool could be stored. The dormitories were above. The Cistercians were very concerned with cleanliness and the drain from the lay brothers reredorter (toilet block) can still be seen. To the south east of the cloisters was the infirmary block around its own cloister area. One of the rooms has the remains of two ovens and may have been the bread kitchen. At the far corner of the site are the ruins of the abbot’s house. After the Dissolution of the Monasteries, these were used as a farmhouse for a while. The museum is in a modern building at the edge of the site. It contains a collection of carved stonework mainly from the church, as well as other artefacts found round the site. These were found during clearance operations in the 1920s. These include beautifully carved capitals. There is also a medieval stone lectern base, the only one to survive. There is a C12/13th grave slab with an incised sword and a c13th coped and tiled grave slab. The abbey ruins are now in the care of English Heritage. The site does not attract the crowds of nearby Rievaulx and this is reflected in the lack of facilities provided by English Heritage. There is a small car park (free) and the adjacent Byland Abbey Inn has a tea room, restaurant and rooms. Alternatively, Ampleforth Abbey is only a few minutes drive and we can recommend their tea room!